A long day took me on a “fun” adventure around the Knife Edge, and sent me over a couple of mountain passes on my way through the San Juans.

Around 11 last night, when I got out of my tent to water a bush, I happened to see a meteor on my way back into my tent. That was pretty exciting, since I rarely ever see shooting stars.

Last night, Dog Bite, Plus One, and I had agreed to start up towards knife edge at seven. I was a little late leaving, but I got to where they camped before they were ready to leave, so all was good.

We were all a little surprised to find that Patches had left already. We thought he was going to go over the Knife Edge with Slowpoke, who would now have to do it alone. So, we made a quick change of plans.

Dog Bite really wanted to go over Knife Edge, Plus One really did not, and I wasn’t too thrilled about going over Knife Edge either if there was still snow. So we decided that Dog Bite was going to try and catch up with Slowpoke and go over knife edge together, and Plus One and I would take the alternate down the old CDT towards Trout Lake, and then back up another trail to rejoin the CDT. 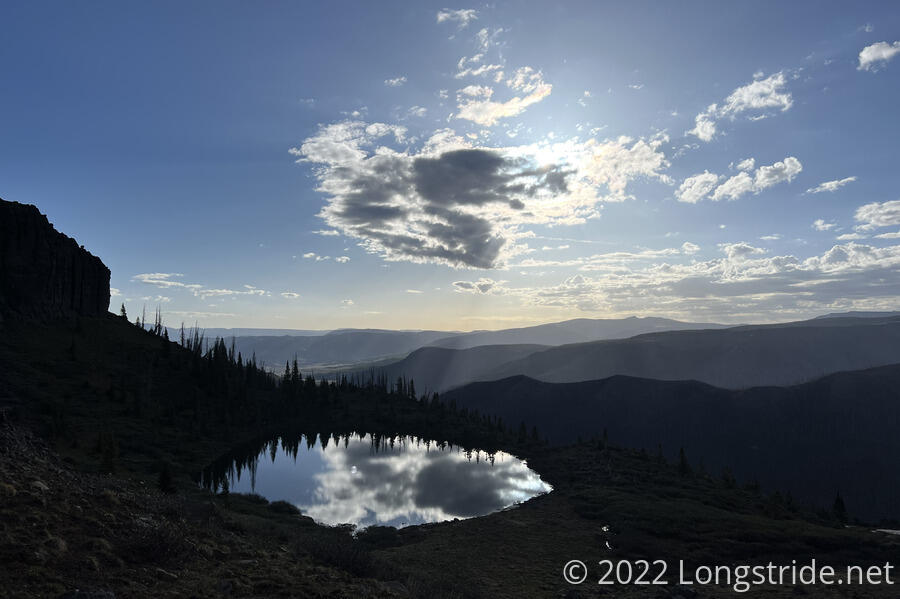 The hike up towards Knife Edge was fairly uneventful, and Plus One and I easily found where the old trail started down the mountain. From there, we could see the extent of snow on Knife Edge. The biggest hurdle of snow was right at the beginning. Beyond that, there were just a few short sections of snow to cross, that had clear footprints going through them. If I hadn’t already agreed to hike the old CDT alternate with Plus One, I might have reconsidered and at least hiked up to the first snow to take a closer look.

Plus One and I scrambled our way down the old trail, which was unmaintained. It was easy to see why: it started off very steep, there was basically nothing to keep the trail together, and each step eroded the mountain further. It was very slow going, to ensure that we didn’t slide down the dirt. At one point, I wondered if perhaps Knife Edge would have been easier. (Looking up, we could see that Dog Bite and Slowpoke were making much faster progress along the mountain than we were.)

Once we got a little lower, we crossed a large rock field, which was interesting; fun even. What wasn’t fun was following the trail through overgrown willows.

Our plan, such that it was, was to drop down to Trout Lake, and then take another trail back up to the CDT. Now that we were on the ground and could see what the obstacles actually were (mostly willows), we decided that it would be better to maintain elevation and more-or-less aim directly for the trail.

This led us around a few rock outcroppings, directly through two dense willow thickets, and up a short steep cliff aided by climbing partway up a pile of snow.

Using our maps as a guide, we aimed ourselves towards the junction between the CDT and the trail to Trout Lake, basically hiking right up the middle between the two trails. As we got closer to the junction, Dog Bite saw us, having gotten there considerably before we did.

Plus One and I decided that the alternate, despite the initial sketchy dirt slide, was a fun adventure. We definitely did not miss going over Knife Edge.

The three of us continued uphill from the trail junction, stopping for a break at a ridge crest where we were able to get cell service.

Dog Bite and Plus One considered going into Durango, rather than Silverton, because of a daily train between the two, and because Durango, as a “college town”, ought to be less expensive than Silverton. However, when we looked at lodging prices, Durango didn’t look any cheaper than Silverton, especially not when factoring in the cost of the train ride from and back to the trail.

So, we booked lodging at The Avon in Silverton, and planned to get there by departing from the CDT at its southern junction with the Colorado Trail, take the CT nine miles down to a train platform, and catch the train that runs daily between Durango and Silverton. (It is supposedly a hard hitch on the dirt road into Silverton from Stony Pass, the usual way in to town; this route will take longer but seems to be more reliable to get us to town.)

I continued on ahead, while they continued to internet a bit longer, and then stopped for a break just before the trail began a steep uphill. (They passed me while i was snacking.)

In the late morning, it was a bit breezy, with lots of clouds, so the sun wasn’t out much to warm things up. The trail generally followed a ridge (so, near the top, meaning, plenty of wind exposure), passing by the rather distinctive Chief Mountain.

After passing Chief Mountain, the trail began a long and steep descent through rather terrible trail conditions. The trail was essentially a pit filled with rocks. (Rather often, multiple pits filled with rocks, generally running parallel to each other.) It was not a fun descent, and easily the worst trail conditions I’ve seen on the CDT so far. (That is, the condition of the trail itself, excepting snow or trees or water on the trail.)

Once the descent started running alongside the mountain, rather than going straight down, the view through the forest opened up, and I could see into the valley below. There was a run of several waterfalls along the river’s valley; the waterfalls and the rock they were in looked like it belonged in the Sierra.

At one of the waterfalls, I could just make out two people; I wondered if perhaps it was Dog Bite and Plus One having taken a detour to a good break spot. (Later, they confirmed that it was them, but the “trail” there wasn’t so great, and Dog Bite got his feet wet in both directions going through a bog.)

I kept going downhill, and then crossed a flat meadow, stopping again just before the next uphill. Patches and Slowpoke were there. Patches, who looked absolutely exhausted, confirmed that he’d taken the alternate, rather than going over the Knife Edge, and that he did not find it to be a fun adventure.

The uphill was a slow slog for me, but I (think I) was able to make a better pace by hiking a bit more slowly and consistently, rather than faster, but taking frequent (short) standing breaks. 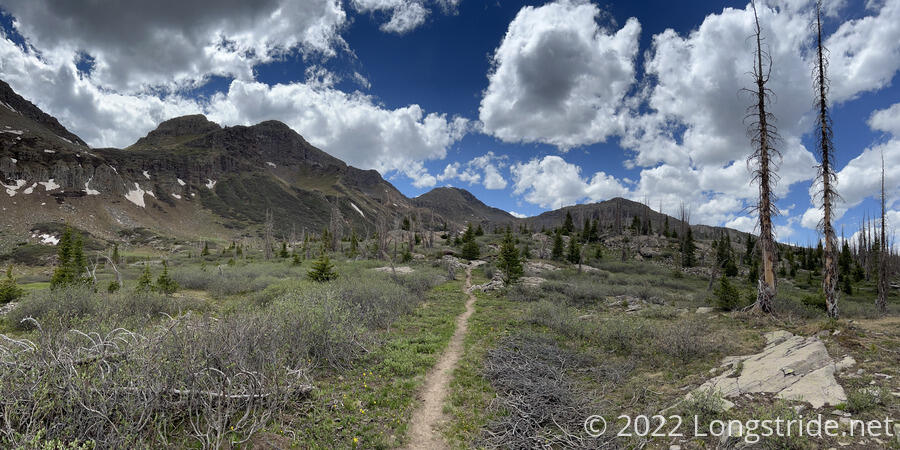 Dog Bite and Plus One caught up with me, and then I caught up with them when we stopped at a creek for water (and snacks for me). Now a bit late in the afternoon, I briefly considered cooking dinner there, since the campsite we were aiming for did not have water. However, Dog Bite pointed out that there was a creek a mile further (and downhill), and that seemed like a more efficient use of time. So I got just enough water to make it to the creek, and pushed on.

All three of us made a wrong turn at a trail junction just past the creek, taking us off in the direction of a nearby lake, nearly the complete opposite direction the CDT went. I seem to have realized it a bit sooner than they did, based on how far down into the valley I saw them climbing back up towards the trail.

After wrapping around the side of the mountain for a bit, the trail took us through an overgrown section of willows. There’d been plenty of overgrown willows before, but here, they were nearly completely crossing the trail from both sides, and I had to force my way through. (Dog Bite and Plus One had stopped a bit after the willows; Plus One predicted that “Longstride’s not gonna like this”, which was confirmed when I got to the willows and yelled out in annoyance.)

In the middle of the willows, I found a Smartwater bottle on the ground. I called out to see if Dog Bite or Plus One had dropped a bottle; they hadn’t, so I left it where it was. I was already getting cut up by the willows, bending over to pick up a water bottle was only asking for more injury.

After a few steep ascents and descents through the mountains, the trail cut through a valley with a number of lakes (and more than its share over overgrown willows). 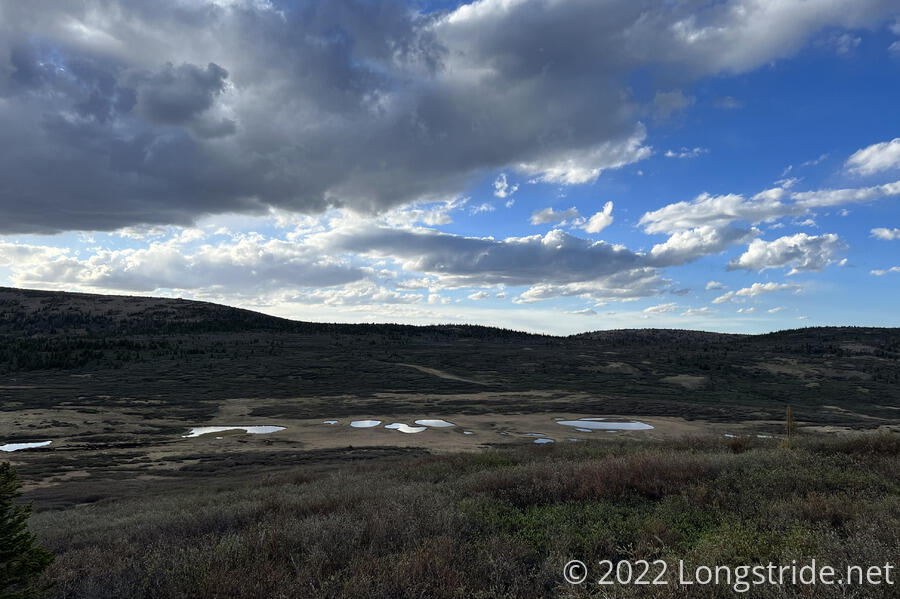 Lakes — A series of small lakes in a valley.

As the sun dipped behind a distant mountain, I climbed up and over one last hill, and raced down the trail, trying to get to my target before the sun set. I passed a number of very nice, flat, and cleared tent spaces alongside the trail. If it’d still been an hour or more to sunset, I might have considered stopping at one of them, and walking down to the creek and back to get water. But with little daylight left, I couldn’t afford to waste it on unnecessary hiking, so I kept going, all the way to the creek.

Crossing over the creek, I went up the hill a little bit away from the creek and picked out a relatively flat spot for my tent, stopping just a few seconds before sunset. It wasn’t really in an ideal place. Being so close to the creek, it was almost certain I was going to have lots of condensation in my tent come morning. But it didn’t look like there was any other alternative. I didn’t want to go all the way up the hill to the forest, because it didn’t really look like they were going to be any flat areas there.

Well I was filtering water for dinner, I saw an elk a fair distance away. I hoped that would be an isolated incident, and that it or its friends wouldn’t come visit in the night. 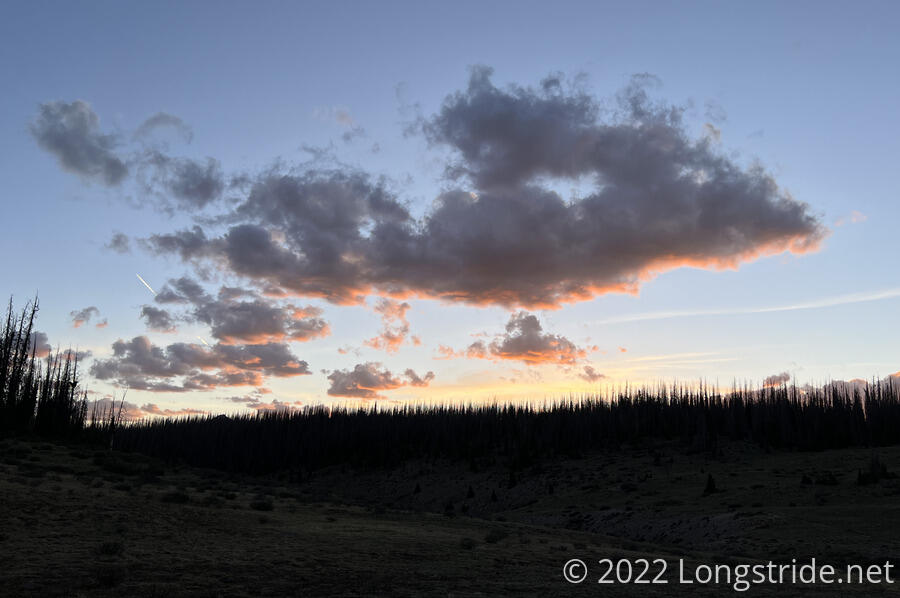 Sunset — The sunset reflects off the bottom of clouds.

With the sunset, and it starting to get cold, I decided I didn’t really want to cook dinner now. So instead, I’m having breakfast for dinner: I’m having tomorrow’s breakfast pop tarts now, and tomorrow morning I’ll cook what should have been dinner tonight.

I’m pretty sure I passed everyone else today; I think I saw Slowpoke’s tent in one of the cleared tenting spaces, and I think I saw Patches tent a few miles earlier. I doubted that Dog Bite and Plus One would continue hiking after dark to get to the river.

At 17.2 miles, this was my second-longest day in the San Juans. I can’t really tell if this means I’m getting more acclimated to the elevation, or the mountains are getting easier. I think maybe it’s a combination of both.