Today, I left Lake City and continued hiking eastward towards my next trail town, Salida.

Yesterday, I asked Lucky what the best way back to the trailhead was, and he offered to drive me, Lux, and Snoop up, if we agreed on a time that wasn’t too early. We decided on 8:30. So I got up around 7, and went next door to the Chillin’ Internet Coffee Shop for breakfast. (I’d actually also gone there for lunch yesterday.) Back at the hostel, I finished packing my pack, and was ready to go.

The ride was uneventful, though we passed quite a few deer beside the road or running across it. The ride to the trailhead took about half an hour, and I crossed the road and started hiking a little after nine.

Today was a series of long, steep climbs and descents. The first climb started immediately, going through a forest on the way up to Snow Mesa. While I was still in earshot of the parking lot at the trailhead, I heard someone’s car alarm go off twice. 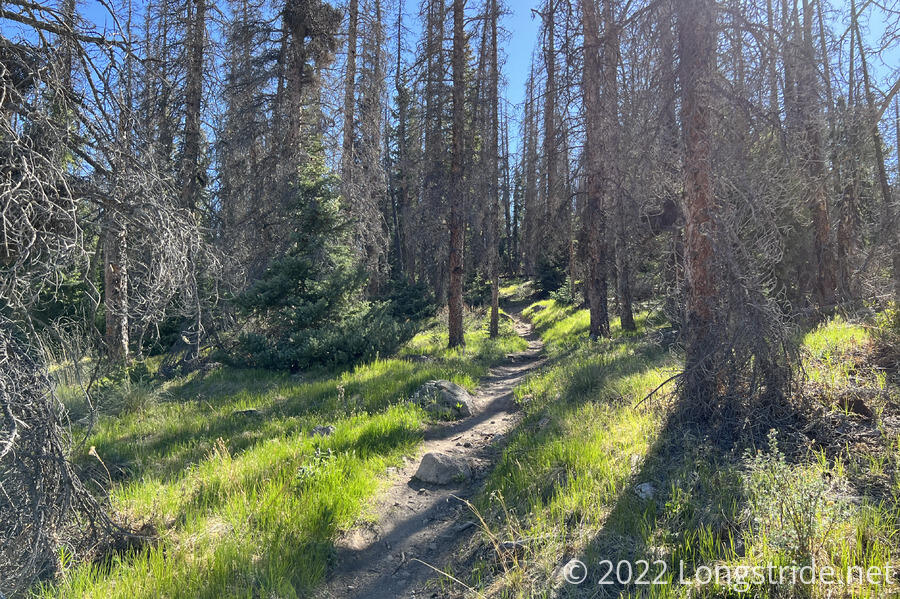 As with all the other forests in Colorado, most of the pines here are dead. What’s different is that there’s a few aspen in this forest starting to take hold. These might be the first aspen I’ve seen on the CDT (and not on a road into town). 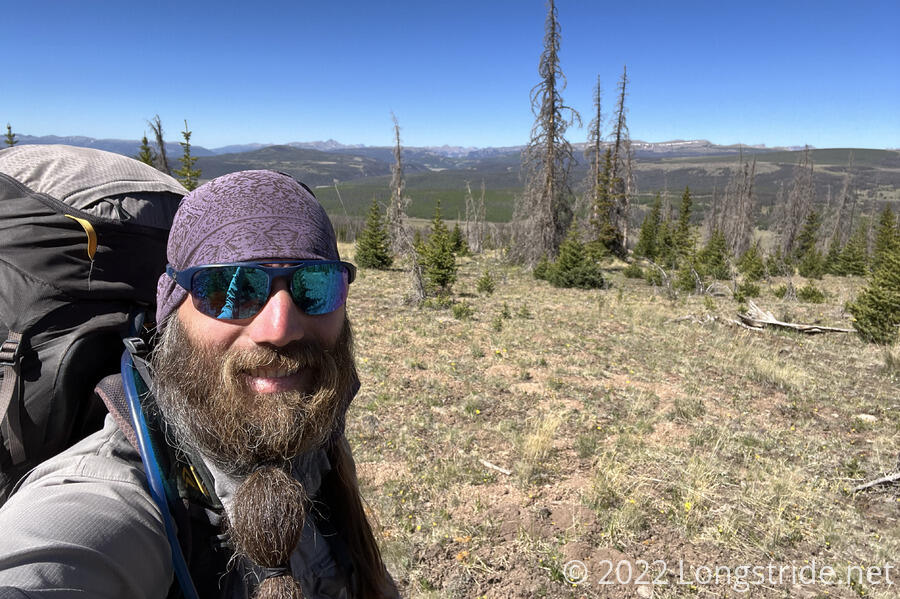 After leaving the forest, climbing above the tree line, the trail followed a dry drainage that curved around almost like a spiral, going all the way to the valley’s headwall. A small amount of snow remained clinging to the headwall; I could imagine the entire area completely filled with snow a month or two ago.

The first climb, about two miles with 1400 feet of gain took me an hour and a half. Granted this was a steep climb, but this felt somewhat disappointing. But at elevation, this seems to be the best I can do.

Climbing out of the valley put me on Snow Mesa, a large, relatively flat expanse, with grasses, flowers, and a few willows here and there. Despite the name, there was no snow.

A depression was half-filled with a puddle of water, the last remnants of the snow that probably did cover the plain.

The trail on top of the mesa was only slightly inclined, and I was able to pick up speed; it was a lot more enjoyable than the climb up, for sure. Shortly after noon, I stopped for a break, now about five miles in.

The plan for the day was to do about fifteen miles. That meant I had four more climbs, three of them even steeper than what I’d just done. There only consolation was that once I got past that, the rest of the section to Salida would be much easier.

As I was finishing up, a hiker, Rockhound, passed. He claimed his base weight was always increasing because he picked up interesting rocks to mail back home.

After my break, I got started on the next climb, which was long, but not terribly steep. About halfway up, I crossed my first snow of the day, about 25 steps up through a snow pile that had good footprints to step in.

The trail curved around the mountain, gradually ascending, going over a small dip in the ridge, and then descending the other side. Now, with a new vantage point; ahead, I could see a line of mountains with gray rocky tops and streaks of snow, though I was unsure how far away they were or if the trail goes anywhere near. (It probably doesn’t, at least not for awhile, since I’m heading due east until I get to Monarch Pass.)

A second small snow field, about another 30 steps or so wide was the last of the snow today. It’s quite nice that it’s melted this quickly, given the vastly larger amount of snow I’d hiked across only two weeks ago. Hopefully it’ll be this low to the north when I get there.

Looking back, it appeared there was a landslide on the mountain at some point in the recent past; an ovalish section of vegetation looked rippled and pulled down from higher up. 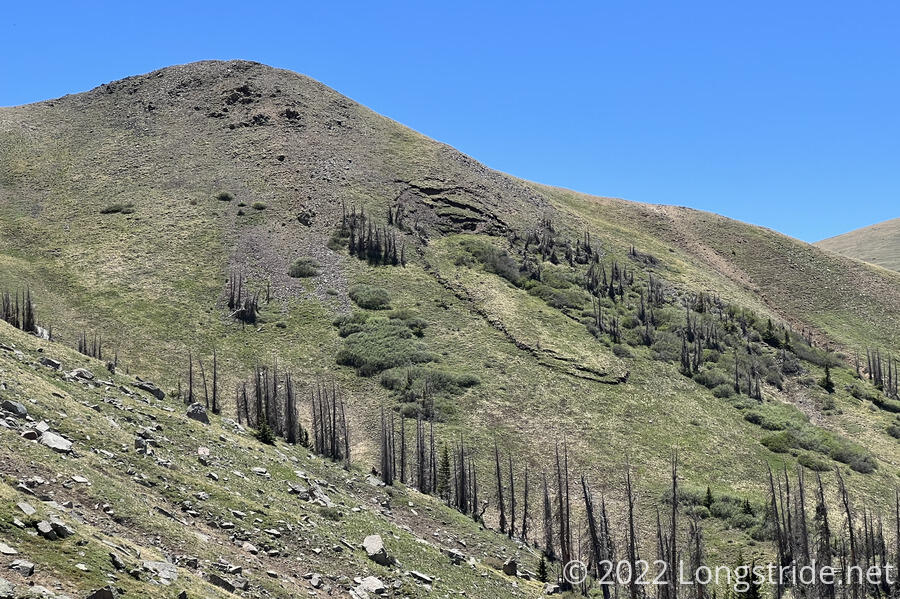 Landslide — A “small” landslide on a hill.

After a break at a small, but nice campsite, about three-quarters of the way downhill from the high point, the trail crossed over a saddle and began a very steep downhill. There was a lot of loose dirt and small rocks, and a few times, I slid a short distance down the hill. (Inches, probably, but just far enough that it was rather unnerving.)

On the climb up, I passed Middle Mineral Creek, which had a large beaver dam built into it. It also seemed to have a somewhat sizable crack, and there was a small waterfall of water pouring through the wall of the dam.

Most of the rest of the day was a long, slow slog, and not even the downhills were fast, because they were also steep.

A view back from the trail.

Just before the last climb of the day, the trail passed San Luis Pass, marking the north end of the Creede Cutoff, and the end of the “horseshoe” segment of the Colorado CDT.

My target for the day was a campsite just after a small creek, 15.7 miles from where I started.

Already at the campsite were Rockhound and Swiss Chris. I quickly set my tent up, and returned to the creek to get water for dinner.

For most of the day, there was not a cloud in the sky, making it warmer than I’d wanted during the day. As soon as the sun dipped behind the mountains, though, it got cold fast.

While I was making dinner, Rockhound mentioned he was going to summit San Luis Peak. At 14,014 ft, and only 1400 feet of extra elevation gain, it seems to be one of the first “fourteeners” within easy access to the trail.

At a junction up ahead, a trail connects the CDT to the summit. There are two other ways back from the summit besides returning via the same trail; one connects to the CDT about a mile and a half ahead, but looks pretty steep. A second reconnects 8.5 miles ahead, and is roughly that long itself. I’ll probably take that one, since it’s less backtracking and is roughly as long and steep as the CDT itself is.