Leaving Leadville, a short hike through the rain put me on the course to Fraser, my next trail town.

The first order of business this morning, after getting up and repacking my pack, was finishing my plan to get to my next trail town, Fraser. With a pair of 20 mile days and a challenging section involving lots of elevation and difficult terrain, it’s not going to be an easy hike, but I think I can be there on Friday.

Pale Ale, Sprouts, Stumblebee, Bass, and I left the hostel, heading for breakfast. We stopped by Silver Llama, on the recommendation of the hostel’s owner, but they had an hour wait for food. We tried another restaurant, Golden Burro, which was able to seat us immediately, but the food also wound up taking about an hour. I got a “waffle-wich”, which was good, but also much smaller than I expected. Our waiter said it was one of his favorite dishes; Stumblebee asked if he’d say otherwise. He said he was always honest about that, and gave an example of the jello shots they had left over from an event as something he didn’t recommend.

Which is how we wound up with terrible-tasting jello shots. (Warned us, he did.)

After breakfast, I bid farewell (or rather, until next time) to everyone; they were planning on returning to Tennessee Pass, while I was continuing from Copper Mountain.

I left the restaurant, and walked towards the Safeway supermarket. On my way there, I passed by a Family  Dollar, and decided that since I would probably be able to do my entire resupply there, I probably ought to, since it was going to be another half mile walk to the Safeway, and I was running out of time. When I left the restaurant, I had less than an hour and a half to do my resupply, return to the hostel and repack it, and then make it to the bus stop to return to the trail.

The Family Dollar felt like it had been ransacked, though, and it was missing a few things I wanted (in particular, Clif bars, or any sort of protein bar). I had to improvise, and wound up with a ton of extra chocolate. The snack situation for the next section is going to be somewhat suboptimal.

Back at the hostel, after I finished repacking my food, I realized that I still needed a new fuel can. I checked the hiker box at the hostel, and they were plenty of fuel cans, and some even felt like they were half full. But that would’ve been taking two half-full fuel cans, which would have been extra weight.

Leaving the hostel, a light drizzle started, and I rushed back towards town, checking all three shops that had hiking gear, before finding one that did have fuel. My resupply complete, I rushed towards the bus stop in front of City Hall, arriving just a few minutes before the bus.

Right after I got there, the rest of the group also showed up. They decided to entirely skip the section I hiked yesterday, and were going to go forward from Copper Mountain. Their next stop was going to be the town of Frisco, on the other side of the road crossing that goes into Breckenridge, where I’d originally planned to stop, about 15 trail miles ahead. (This is because Pale Ale was getting off-trail. I might have joined them, but I needed to get to Frasier sooner than that: my partner, CareFree, would be flying into Denver to visit for a week, and I’d booked a train ticket from Faser to Denver on Friday afternoon to meet her there.)

The bus arrived a few minutes late, and we returned to the roughly the same place as where we were dropped off yesterday morning. Rather than following the same path as we did yesterday and walking all the way back to the CDT, a mile and a half from where we were dropped off, I instead suggested that we head in the other direction, walking towards the highway that brought us to Copper Mountain. This would return us to the CDT a little bit ahead of where I was yesterday; the short section we’re skipping goes through the outskirts of the ski resort, so I didn’t imagine that there would’ve been much lost in the way of views.

We followed the road out of the ski resort, and turned down the highway, passing two Colorado Trail southbounders, who pointed us in the direction of a trail head on the far side of a parking lot, a little bit closer than where I’d expected to pick up the trail. They warned us that it was going to be a long steep climb up and over the ridge, and that there was a campsite about a mile or two up that we could use if necessary.

At the trail head, we met a day hiker, who had just hiked from the beginning of this section of the trail, and was now starting her return hike. I started up the hill after her, and in front of the rest of the group. That was the last time I saw them today.

Surprisingly, given I had a pack with six days of food, I managed to catch up with the day hiker, Joni, and we struck up a conversation that ultimately lasted until I stopped to make camp.

I lead the way going up the mountain, which seemed a lot longer than I expected it to be when I looked at my trail guide. The trail on the way up was relatively smooth, though a little bit steep. While I was under the tree line, it rained on and off. There was occasional thunder and lightning, as close as half a mile away. Fortunately, the thunder stopped before Joni and I left the tree line. The rain, however, did not, and shortly after going above the tree line, I had to put my rain jacket on to stay warm.

Once above the tree line, the trail had a couple of false summits. The rain finally stopped before we went over the ridge, and in the distance, I could see a little bit of blue sky beneath the clouds. 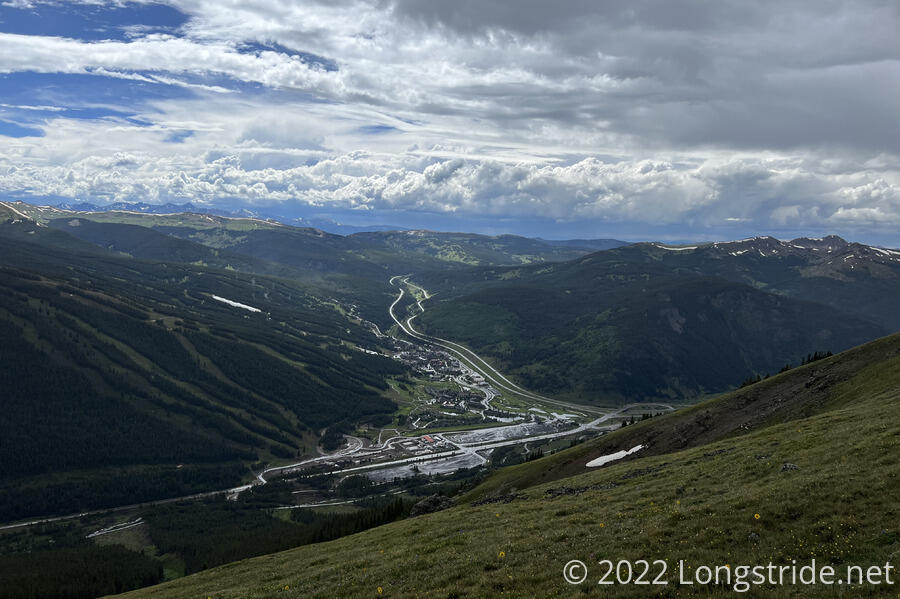 View towards the Copper Mountain ski resort. I-70 comes from there right and heads down the valley ahead.

Just as we were approaching the top of the ridge, I saw a hiker coming from that direction. He had the most orange pack cover I’d ever seen. He said it was so he could flag down aircraft if necessary in a survival condition; this seemed to be a little at odds with the otherwise head-to-toe camo gear he was wearing. 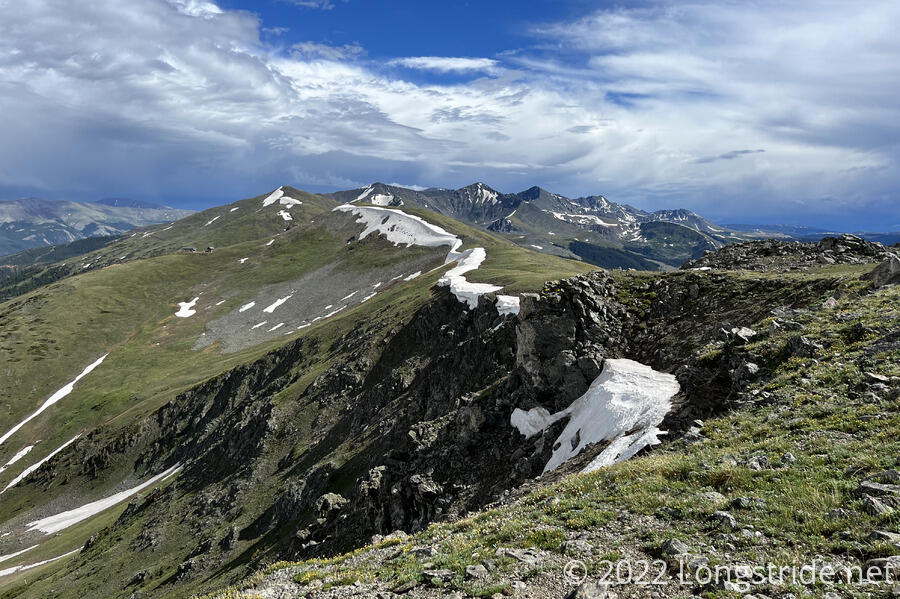 Once the trail started descending, it seemed a bit steeper than all the way up, and Joni took the lead. Eventually, we wound up below the tree line again, which seemed to be the cue for it to start raining again.

On the way down, Joni pointed out an area that had given her some difficulty the last time she was hiking here. There had been a significant amount of snow on the ground, and also high winds, and she wound up doing some terrible postholing. The snow wasn’t completely gone now, and we had to take a few detours to avoid hiking through the snow, but it wasn’t anything terribly significant.

I planned roughly 6.5 miles on the CDT today to a campsite near a creek. However, when I got there, I found that the tent sites were all taken. Someone even had a fire going.

I continued on, going about another mile to another campsite next to a creek. When I got there, I found that there are already two tents set up, but there was space for third, so I decided to stop there. I bid Joni farewell, and set up my tent, as the rain started to pick up.

At the campsites were two Colorado trail hikers and their dog, and whoever else was in the second tent. The two CT hikers also had a tarp set up adjacent to their tent, giving them a nice dry area outside to sit and cook dinner. I, on the other hand, had to cook my dinner from inside my tent, though by that point, the rain had actually stopped.

Sometime after dinner, clouds lifted, and there was a little bit of clear sky.

The conversation with Joni was fun, but more importantly, her presence helped push me to go faster than I otherwise would have today (especially with the rain), since we were actually able to match each other’s speed and push each other to go faster.

Having gone a little further today than expected, I can either go a little shorter tomorrow, or still do the 20 mile day I had planned, to a further stream crossing with campsites. Which I’ll do will depend on when I get up tomorrow, and how difficult the trail is. And, whether or not it rains.