With a roadwalk nearly the entire day, I completed my first marathon on the CDT, unexpectedly getting me closer to Rawlins than I’d planned.

I planned to start hiking “early” today, but that hope was dashed by my not getting up until 6 am, just after sunrise. It was beautiful out, though, with green grass, blue sky, and the clouds all the way around. I did, though, manage to be very efficient about breaking camp, aided by my tent being, quite unexpectedly for camping in a field, completely dry. I resumed hiking down the dirt road just before 7. 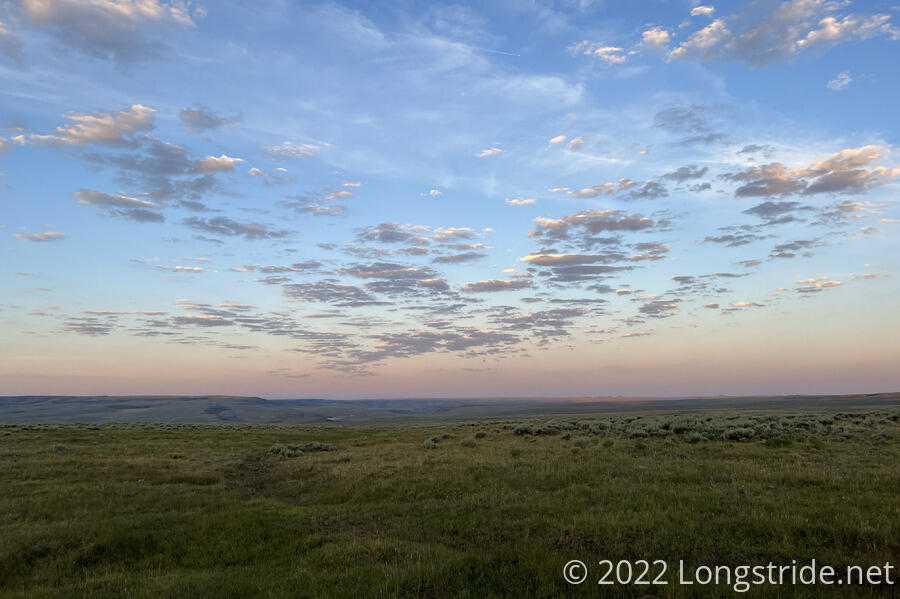 Soon, I reached Sage Creek Road, and turned north, beginning a paved roadwalk. There wasn’t much of a shoulder, but there was also very little traffic. In theory, I could take this road all the way to Rawlins and cut off quite a few miles, but that would be a very long walk on a paved road, likely without any water.

Chipmunks darted around the grass on the side of the road, and four deer pranced along a hill, grazing on shrubs. Some hills aside, I had good views from the road, since the ground was a lot flatter, having left the mountains behind.

After about half an hour, I turned off the paved road, following a dirt road northwest. Still firmly in the land of cow pastures, I saw a herd standing atop a nearby hill. 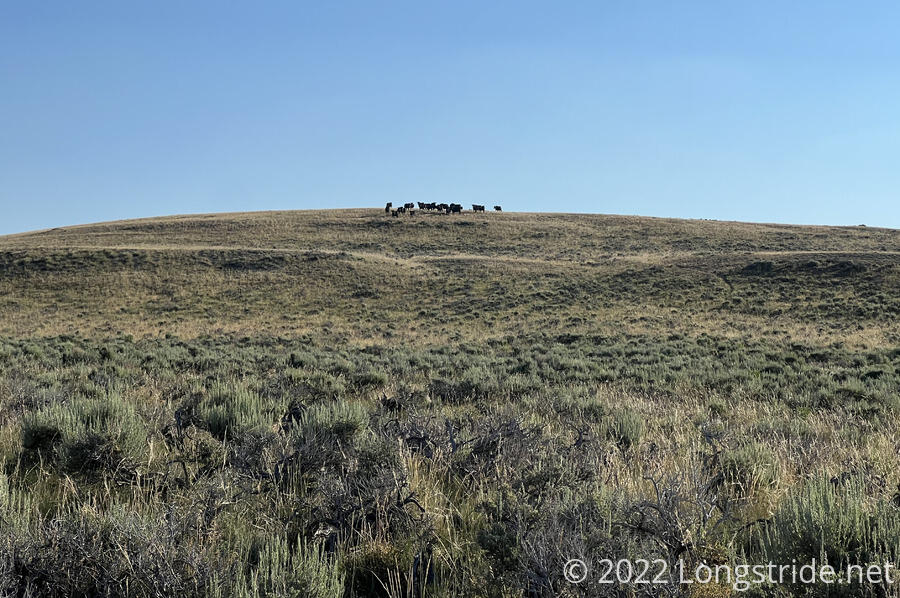 Cows on a Ridge

For the next several miles, the trail continued to follow dirt roads through cow pastures. With only one short exception where the road temporarily became a steep rutted trail down a hill in a stand of trees, there was no shade to be seen. 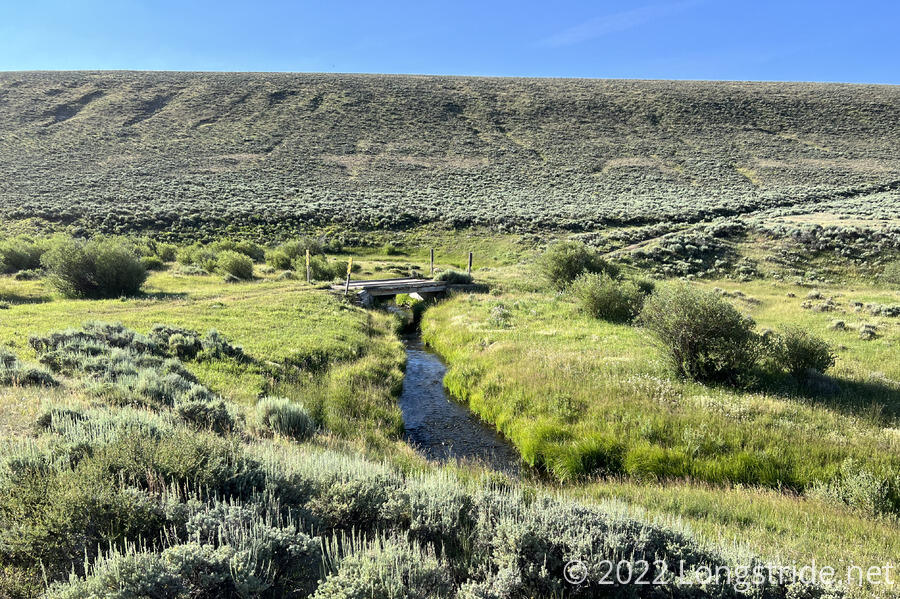 Once the sun had been up for an hour or two, there were basically no clouds. A gentle breeze blowed, making it a somewhat enjoyable, if mindless walk. 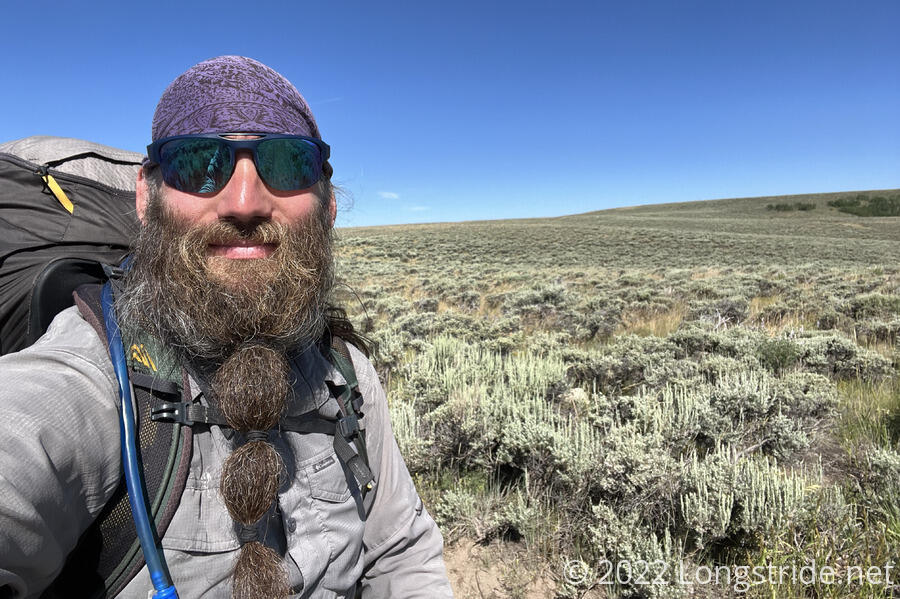 The trail continued as a dirt road through gentle rolling hills for hours. Off in the distance, flat-topped mesas marked a clear departure from the the more rugged terrain of Colorado.

A dirt road through gently rolling hills, with flat-topped mesas in the distance.

Around 11, I ran into the only hiker I saw today, Emily, a southbound section-hiker doing Wyoming. She said she saw two hikers yesterday, probably about a day ahead now; from the description, one of them was Stumblebee. So I’m definitely not too far behind.

A sign announced the “Grizzly Allotment Parcel” of the Red Rim Wildlife Habitat Management Area, with a very long poetic description by the Wyoming Game and Fish Department of the scenery and the reason it’s a protected area. I got hung up on the “Grizzly” bit, not expecting to be in Grizzly bear territory yet, until I decided that it was just a weird name given to the area.

I stopped for a break just after noon, now 13 miles into the day. Two motorcyclists, who appeared to be bikepacking, zoomed past. I really rather wanted to take a nap, but there was no shade, and nowhere to really stretch out and relax. As I moved to get going again, bees came out of nowhere and took an interest in my pack. Thin, wispy clouds started to form, occasionally flitting in front of the sun, but not actually blocking any of its heat. An occasional ATV passed, presumably ranch hands.

An hour (and over three miles) later, I stopped at a piped spring just off the road. The spring was located inside a fenced-in area; fortunately, it was a wooden fence, which made it a lot easier to climb over than a barbed-wire fence. (I presume the fence is meant more to keep cows out than hikers.) The water was cold and refreshing, as was the shade of a large tree clearly feeding off the runoff of the spring. The biting flies, though, were not refreshing.

About a mile after the spring, I took a detour off the road. The road follows the contour of the mountain, making effectively a four-mile-long switchback. Instead, I followed a (faint, at first) ATV trail more-or-less straight downhill, saving three miles (and an hour) of hiking.

Another mile brought me to Muddy Creek, which had a small parking lot and a spot to camp. I stopped for a snack break, and collected water for dinner to carry to wherever I stopped for the day. In contrast to its name, the water was quite clear, and fast-flowing. I took the opportunity to rinse off my feet, which had picked up no small amount of dirt from dust kicked up on today’s dirt roads.

If there had been shade, I would have just cooked dinner there, so I wouldn’t have to carry the water (or food). In any case, I decided not to camp there; it was only 3 pm, and I’d gone not quite 19 miles. Still plenty of time to go further.

I decided to keep going until I found somewhere with permanent (as opposed to cloud) shade, and cook dinner there. But then some clouds obscured the sun and a nice breeze blew, and I realized that such a place probably didn’t exist. So I just cooked dinner there. If the clouds moved (and they did), I still wouldn’t have much shade, but at least I’d be able to sit with my back towards the sun for an hour or so. An hour and a half after I reached the creek, I was back on the road.

For most of the day, the roads I've been on have traveled through wide-open gently rolling hills. Now, though, the trail has taken me into an area with taller hills surrounding me. I almost felt penned in.

As the hour grew later, the sun descended and continued its trek across the sky to the west, now putting it directly in my face. Thin wisps of clouds lightly attenuated the sun, then cleared. I passed Muddy Creek again, which was now very silty. On a side road, off in the distance, I saw two RVs and and a few trucks. Someone was having a big camping excursion.

About a mile later, a sign warned that, for the next 5.2 miles, the road was entering private property, and I had to stay on the road. This committed me to at least another hour and a half of hiking. As tiring as it had been to walk down a road with no shade, I was still making quite good time, and used that to keep pushing ahead.

After crossing Muddy Creek for a third time, the trail turned uphill away from the creek, taking me through a relatively narrow valley compared to the mountains alongside. With the sun descending, it was only a matter of time before it sunk behind the mountains and I was back in shade.

The road I followed took on a reddish color. I couldn’t tell if that was natural to this valley, the gravel that was used, or some kind of coating on the gravel. Either way, it was different. 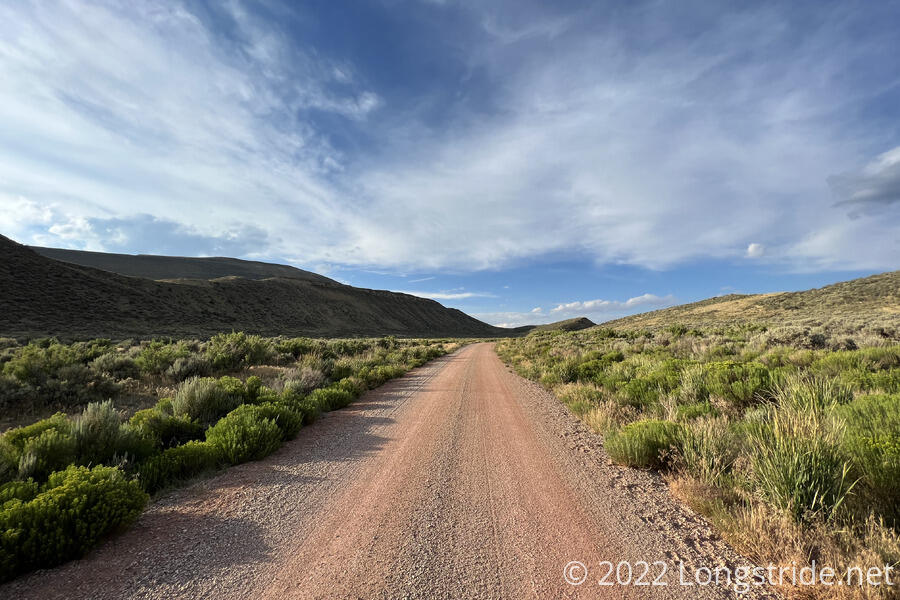 The road left private land, entering a Wyoming State Land Trust, with a sign that forbade overnight camping. This was disappointing, because adjacent to the sign was a terrific flat area that would have made a perfect campsite. I kept going. By now, the sun had descended below the mountain to the west, and it had started to cool off. 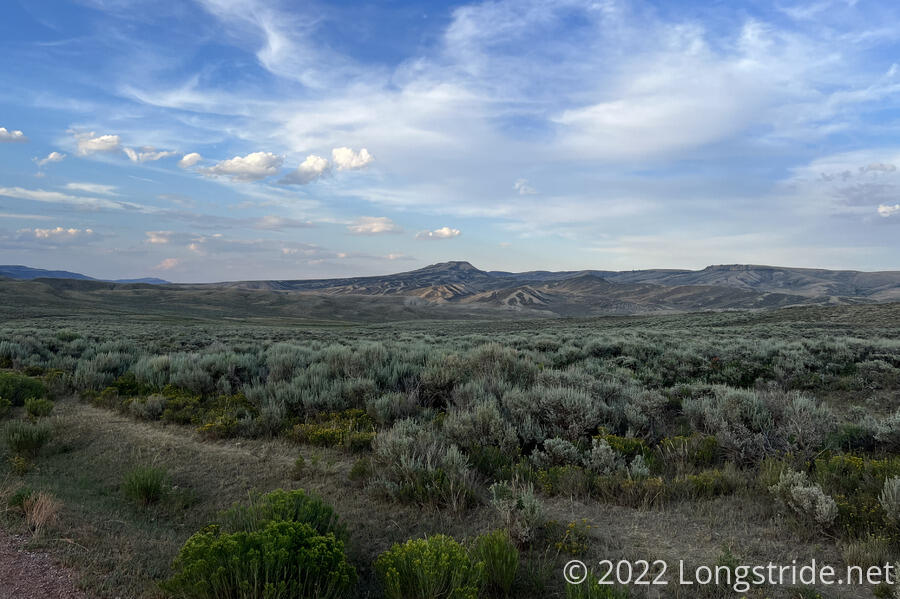 After another short stretch on private land, the trail returned to BLM land, which had been the majority of land I’d been on since exiting the national forest yesterday. Just off-trail, below a dry water tank for cattle, a flat area made for a passable campsite. It took a little while to find a good place to set up, since the ground was covered in dry cow pies, but I settled on a spot that seemed like it was exactly where someone had camped last night. I was done setting up and in my tent not ten minutes after sunset.

I noticed a few small holes in the mesh netting on one of my tent’s side walls. It’s a little disappointing, but I’m pleased my tent has otherwise seemed to have held up better than I did on the PCT.

With 27.2 miles today, I hiked my first marathon of the CDT. And, including the distance I hiked towards and in Encampment two days ago, this gives me six days in a row of 20+ mile distances.

In general, I didn’t much care for the trail today. The scenery was nice, but it was a lot of sameness, with limited camping options, and roadwalk nearly the entire day. But at least the paved road walk was limited.

With the shortcut I took, I’m now just under 29 miles from Rawlins. It’ll be a stretch, but I can probably make it to town tomorrow evening. Probably, I will have to, since the water and camping situation — especially along a paved roadwalk into town — look to be pretty bad.

It was very nice out, so I left most of my tent doors open for ventilation. As I was going to sleep, the sky to the east is filled with flashing light; I’d seen it yesterday, and forgot to make note of it. I suspect it is lightning, but if so, it’s quite a distance off since there’s no sound. A little later, the wind picked up and the light seemed to be coming from all directions, so I closed all but one of the doors so that there’d at least be a little airflow. Hopefully, my tent won’t be filled with condensation in the morning…