A long day out of Encampment sends me over mountains and cow pastures, and I make further than planned progress towards the next trail town, Rawlins.

I got up a bit later than I’d planned. The walk to the post office was largely uneventful, though there was a lot more traffic than there was last night, and I passed two deer standing on the side of the road. I was a bit worried once I got there; the shutters on the winders were closed, so the whole building looked closed; fortunately, the post office was open. (I think the windows were blocked to keep the sun out; it was quite warm inside even though it was still early in the day.)

I was pleasantly surprised to find that my resupply box only had three days of food, rather than the four I thought I put in the box. With an extra day worth of food thanks to the trail magic three evenings ago, I’ve already got more food than I need to get to Rawlins, so a fourth day of food would have been a lot of extra unnecessary weight.

As promised last night, Bob picked me up from the post office, accompanied by his friend Gary, and two Pomeranians, and twenty minutes later, I was back up at Battle Pass. To the west, off in the distance, I could see what looked like a desert, with dust in the air — the Red Desert, which contains the Great Divide Basin I’ll be traveling through in a few days. 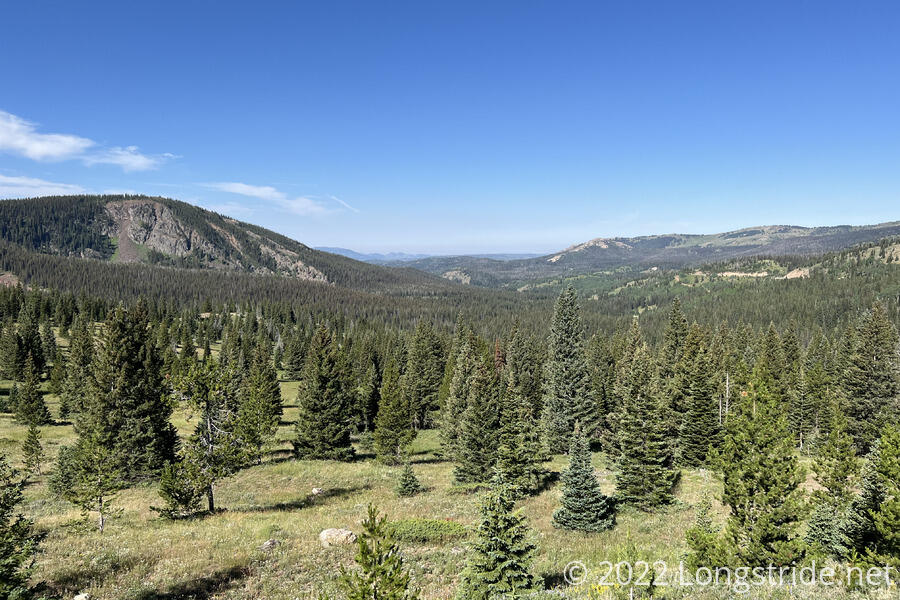 View West From Battle Pass — The Red Desert is visible in the distance.

From the trailhead, I continued to follow the highway for a short distance, turning onto a dirt road that went past a small car campground. The trail departed the road and steeply climbed up to a ridge, and then gently meandered through a forest, eventually joining another dirt road heading towards Bridger Peak. 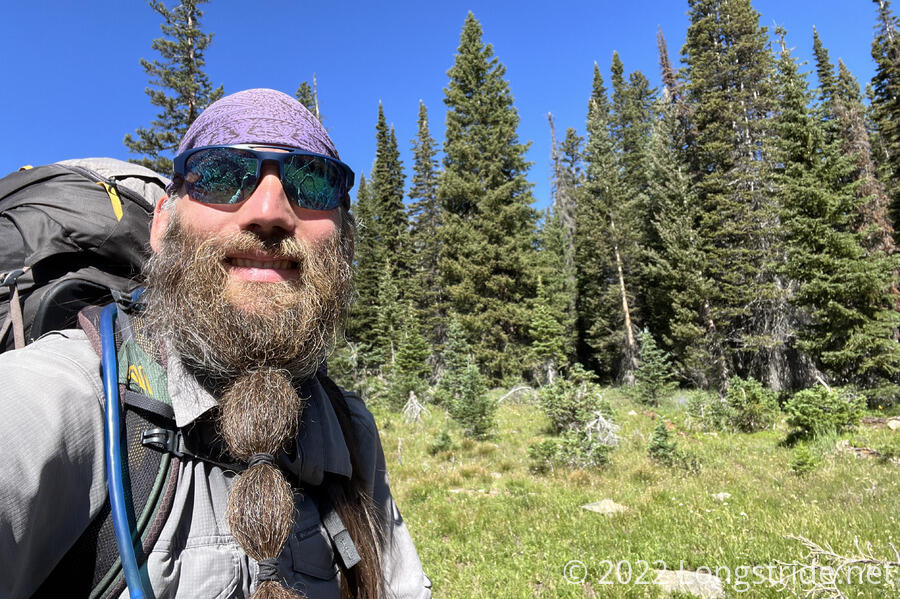 A couple of trucks and joggers passed on the road, including a woman whose large “friendly” dog got entirely too close to me.

As I got closer to the summit, the road picked up a bit more steepness, and became rocky and highly eroded from prior water flow. So I was surprised to see a motorcyclist (as in, an actual motorcycle, not a dirt bike) riding down the road, and having a terrible time of it. It was kind of impressive; I forget exactly what he said first, but acknowledging the difficulty of his ride, I replied that “this is not the smoothest road ever”. Noting that I was hiking with a large backpack, he said, “and I thought I was doing something tough!”

As I approached the summit of Bridger Peak, the trail left the road, following a trail that was barely visible, even with cairns. It was a more direct route to the summit, but I should have just stayed on the road. Even though it would have been longer, it probably would have been faster.

At the trail’s closest approach to the summit, I dropped my pack and followed a dirt access road to the top, where a pair of antennas and solar panels stood among the foundation and remnants of an older structure. At 11,004 ft, this is the first of only three times in Wyoming the trail is above 11,000 feet, and the views all around were amazing.

View Northwest from Bridger Peak — The Great Divide Basin, north of Rawlins, can be seen in the far distance.

Leaving the summit, the trail led me into a jumble of sharp, flat, shifty rocks, petering out as it did so. Fortunately, I could see beyond the rocks where the trail was up ahead, and was able to find an alternate route. It was briefly interesting, though, and it’s been awhile since the trail crossed a scree field.

Returning to the dirt road, I continued on, generally following the ridge for awhile, and getting a better view of the southernmost portions of the Great Divide Basin to the north. 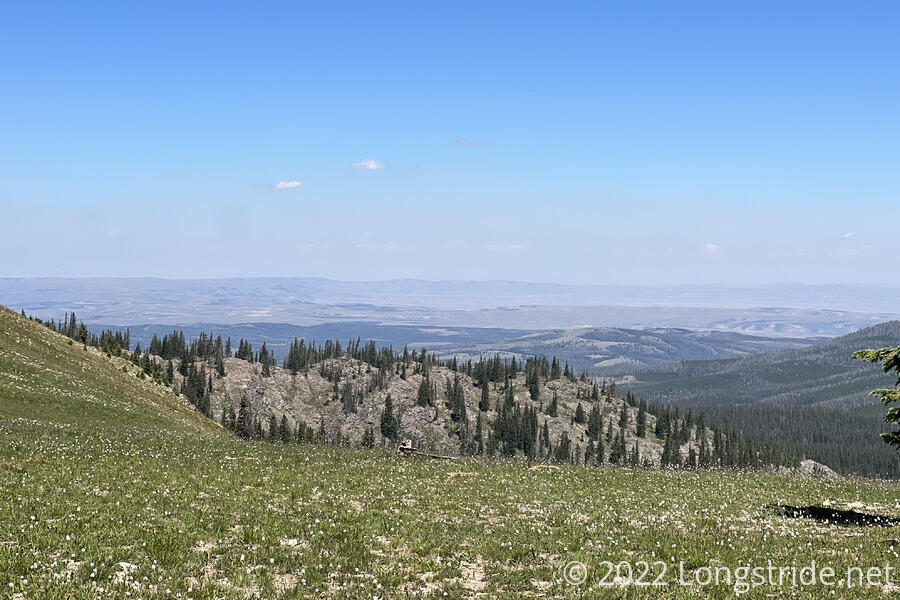 Shortly after continuing from a break, I found a ski mask on the ground. It seemed clean and didn’t look to have been there long, so I picked it up, just in case it belonged to another northbound hiker.

From the summit, the road became an easy downhill along the ridge, and I began listening to podcasts to help pass the time. After a few miles, having re-entered forest, the trail diverged from the ridge and eventually became a trail again, dropping down from the mountains and heading towards the desert I saw lied ahead. Only a couple of blowdowns slowed my progress.

I stopped for a second break just downhill from a dirt road; while I was there, two trucks sped down the road, going so unreasonably fast that dust clouds filled the air for several minutes. Shortly after, the trail exited the forest, going through a meadow, which had the first cactus I’ve seen since New Mexico. 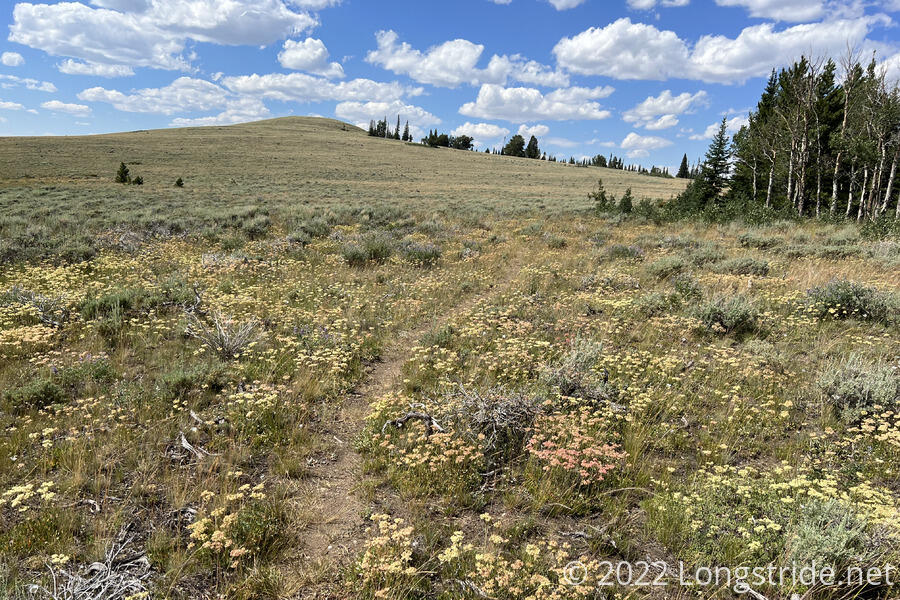 The meadow was a transition between forest and desert, quite unlike the meadows of Colorado, or even the much more wet meadows in Wyoming yesterday and the day before. It seemed fitting, then, that there’d be little cloud cover. The sun was bright, and it was hot out. But, on the upside, there were a lot of butterflies.

After awhile of meadows interspersed with short stretches of forest, the trail went through a mile or two stretch with a huge amount of fallen trees. I couldn’t tell if it was because of lumber harvesting (there were a couple of dirt roads that went through the area), or if it was just a lot of dead trees blown over by high winds. 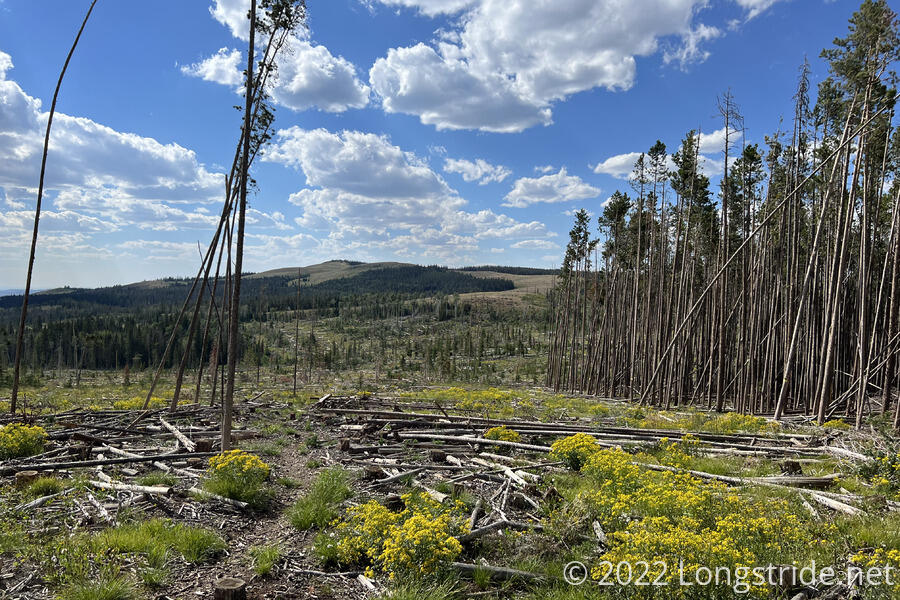 A long stretch of fallen trees between forests and meadows.

I passed a couple hundred feet below Divide Peak, really a rather small bump compared to the mountains in Colorado. Unfortunately, a fence stretched along the hillside between the trail and the summit blocked easy access, and it was now late enough in the afternoon that I didn’t want to start wasting time unnecessarily.

Reentering the forest, I stopped for a break at a creek, and collected water for dinner. This took a while; the creek flowed slowly, so I had to use an extra soda bottle I’d gotten at the gas station this morning to collect water out of a small pool in the creek.

Now nearly 19 miles in and after 6:30, and with my pack unbalanced with an extra filled water bottle stuffed in the back, I left the creek, not really knowing where I was going to stop for the evening. I decided that would be at the first viable campsite I came across. A couple of minutes later, I found such a campsite, but it was a little small, and there were lots of animal tracks all over, so I decided to keep going.

A little further and I exited the forest again, joining a faint dirt road. It became clear what animal the tracks belonged to: there were more cows in the area.

There was a little flat area around, but I didn’t want to set up in the middle of a cow pasture, so I kept going.

I crossed through another forest, over a dry creek, and a couple more dirt roads, climbing up a rocky hill. With unending views to the southwest, if it hadn’t been so rocky, I’d have camped somewhere along that hill.

I followed the trail over the hill and back down, following a faint path through a rugged landscape with desert scrub. A herd of cows called the area home, standing on the trail ahead of me, and they were none too happy with me as I went stomping through their field. Fortunately, they got out of my way before I got too close.

Since I left the forest after the last creek, I’d been hiking with the sun directly in my face nearly the entire time. It was ocasionally hard to see, between the glare reflecting off my sunglasses, and the resulting lack of contrast as the sun’s brightness waned as it sank towards the horizon.

The trail eventually left the scrub, exiting the Medicine Bow National Forest and joining a dirt road. Eventually, only a few minutes before sunset, I found a flattish patch of grass just off the road, and set up my tent and cooked dinner. 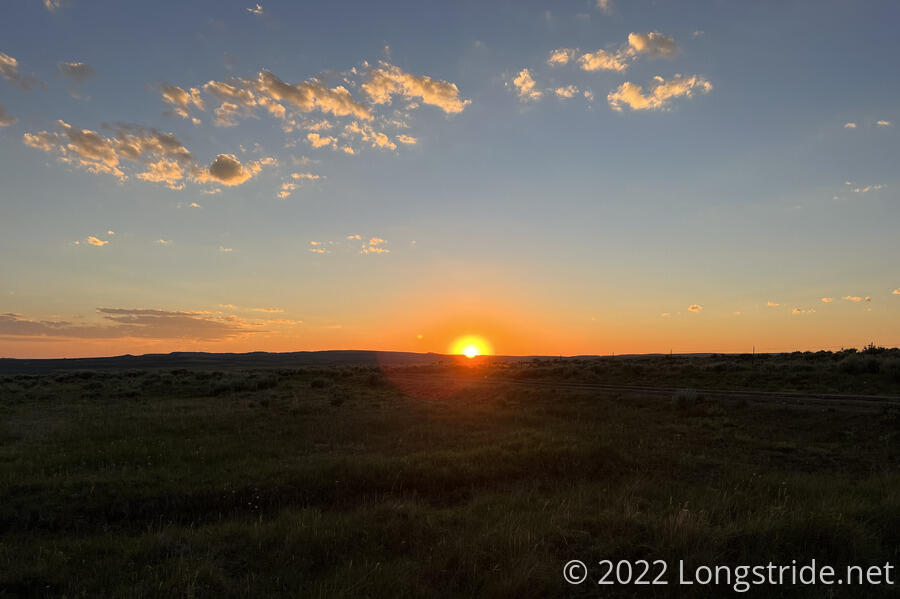 I wasn’t enthused with the campsite — there was a lot of grass, and a lot of insects that needed to be evicted from my tent after I finished cooking dinner. I expect a wet tent tomorrow.

I hiked just under 23 miles today, more than I expected given I came from town this morning. With 59 miles to go to Rawlins, it would be possible to get there in two days, rather than three, if I’m able to push sufficiently far tomorrow. So I’m going to try and get up early tomorrow (which I’d want to do anyway, given I’m camping on the side of a dirt road across from a cow pasture) and hike until sunset, and see where that leaves me.