A relatively short day through lots of meadows brought me to Encampment and Riverside, the first trail towns in Wyoming.

Last night, I set an alarm for 5:15 am, wanting to get started as early as possible to get to Encampment sooner, rather than later. (Preferably, before the post office closed.) But yesterday was so tiring that I went back to sleep until nearly six, when the sun started to rise.

The sun shined brightly on my tent, which helped a little to dry it, but it was still cool and humid out, so even after wiping it down with a towel a few times, it was still went. I was resigned to packing a wet tent and sleeping bag, and that my feet and socks were probably going to get soaked again today since the vegetation along the trail wouldn’t have had time to dry out yet.

I left the trailhead around 7:40. heading uphill. The trail followed a ridge for a little while, giving me a view towards the Hog Park Reservoir, which was still shrouded in fog. 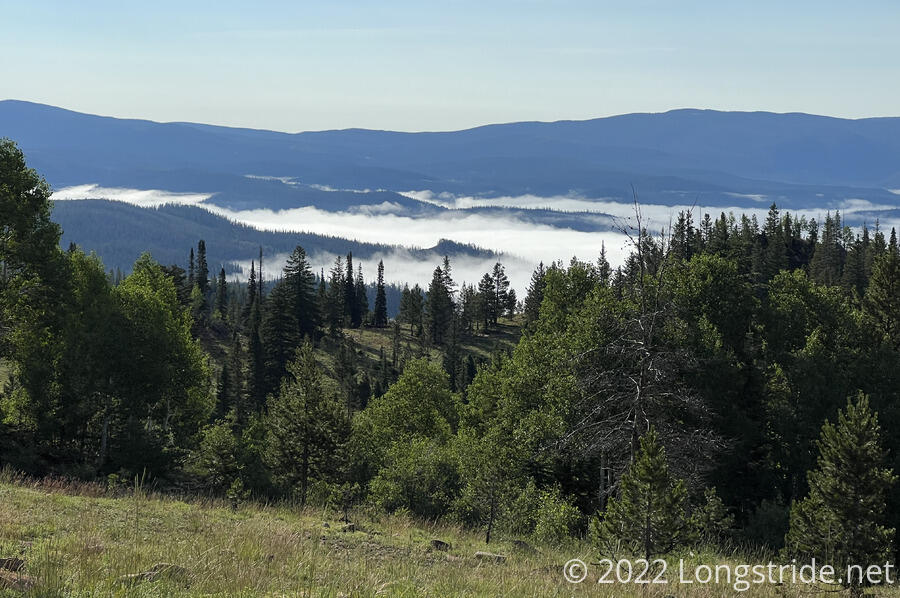 Fog Over the Hog Park Reservoir

My first impression of Wyoming is that the trail is signed considerably more frequently than Colorado. From the trailhead, there were frequent cairns with wooden poles with the CDT logo carved or burned in. The number of markers at times almost seemed a bit comical, reminding me a section of the Appalachian Trail in New York and New Jersey that had a vast overabundance of blazes.

The trail was mostly forested, occasionally coming out into small clearings, until it began the steep part of an ascent up to a relatively flat meadow on top of a mountain. Up top, there was no shortage of good places to camp. 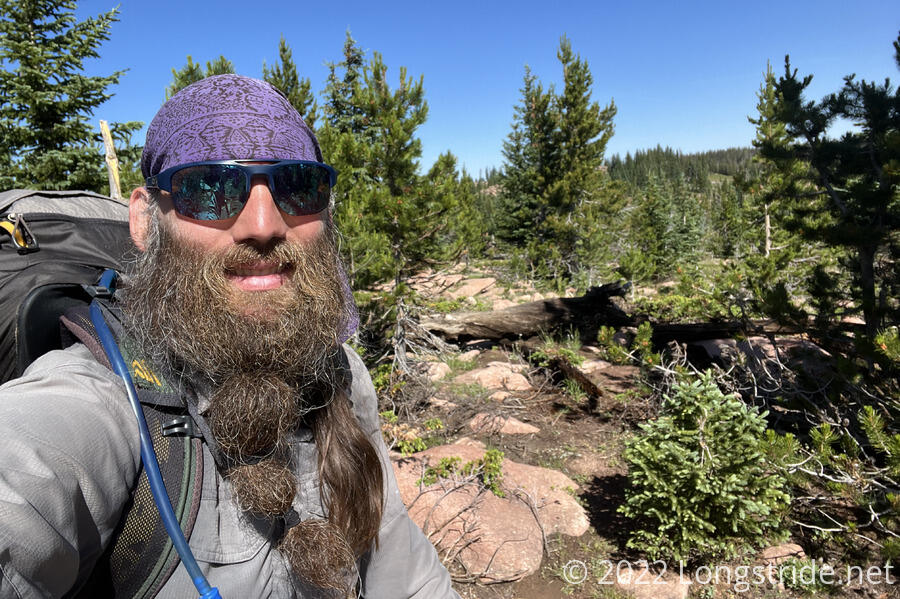 After crossing the meadow, the trail became a lot more rocky, with frequent zig-zags, and the trail itself often became indistinct. The overabundance of cairns and markers was now essential to navigation, though I still wound up slightly off-trail a few times and had to use gps and maps to be sure of what direction I needed to go in.

After descending a bit from that rugged section, the trail continued going through or along meadows. I stopped for a break a little off-trail in a nice open space where I could spread out a little and attempt to dry out my wet clothes from yesterday.

The trail continued dodging between forests and meadows, some of which were quite lush and green. The downside, though, was that some of them were marshy, and it took some effort to keep my feet from getting soaked again. 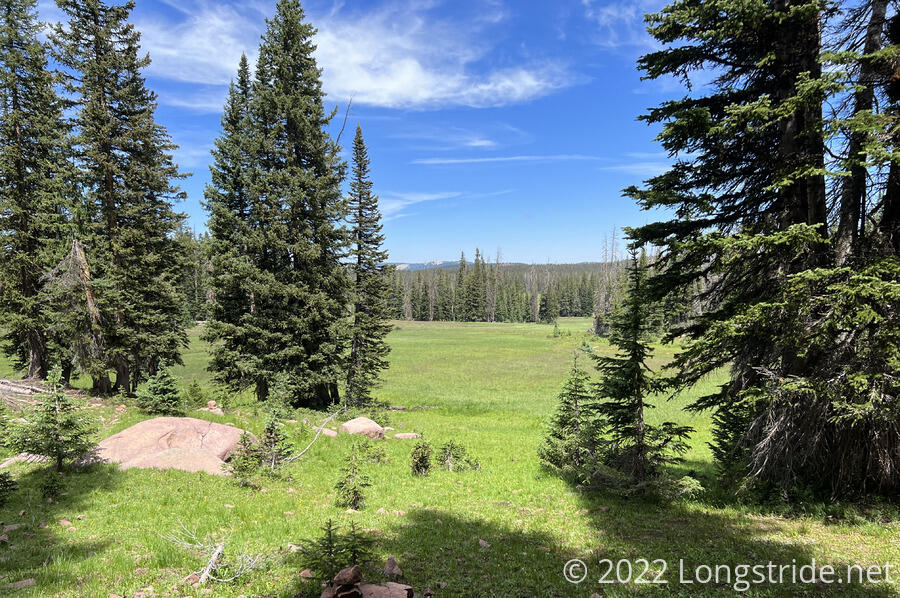 At least the drier sections of the meadows had plenty of wildflowers. 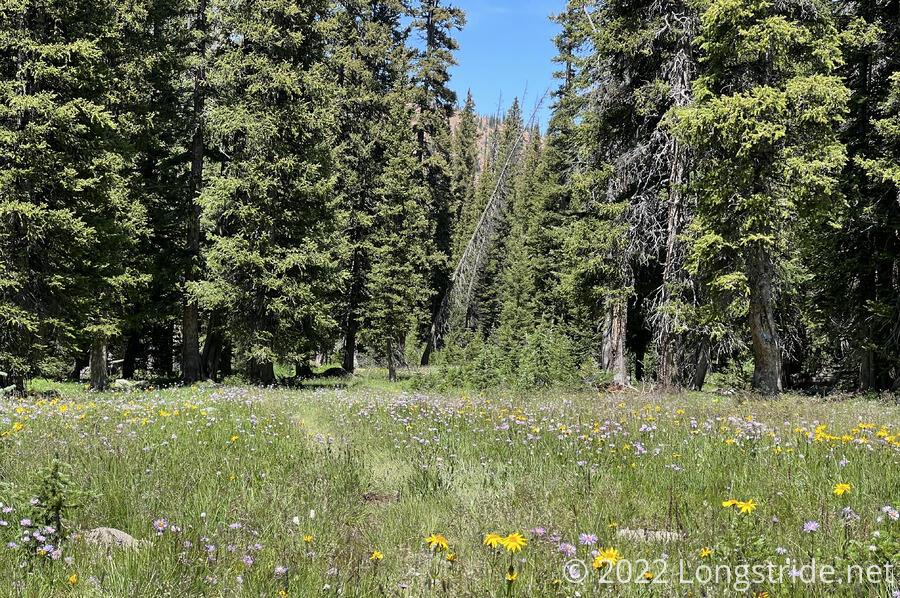 My second break was much sooner than I’d planned; I was more tired and hungry than usual, probably because I only had two breaks yesterday, instead of three or four that would have been more usual for that distance. But now, I was on the final stretch of trail to get to the trailhead to go to town, and I was able to pick up the pace a little.

Cresting over a small hill, I saw near a creek three guys with horses and a dog, and quite a bit of lumber stacked up. They were trail maintainers, getting ready to start constructing a bridge over the creek. (It sorely needed one; though small, it was nearly impossible to get across without getting your feet wet or stepping in mud near the bank, eroding the ground away.) Later, as I approached the trailhead, I passed three more people who were (individually) carrying in large pre-constructed support members for the bridge. I joked that they should have used the horses for that; they said that it was too heavy a load for the horses!

The trail exited a Wilderness area and joined a dirt road, partially through private property, leading to the Red Mountain Trailhead at Battle Pass on WY 70. In the woods just before the parking lot sat a large box full of food and water; it would have been great trail magic if I weren’t going into town. A trail log showed that Stumblebee, Bass, and Sprouts had been here yesterday, so I wasn’t too far behind them.

I walked north along the road for a short distance to another trailhead and parking lot, and started trying to get a ride into town. This was easier said than done. At the head of a valley, I could see down the road for several miles as it wound along the valley’s side, and what I could see was a deserted road. In fifteen minutes, only three cars passed, and two of those were going in the wrong direction.

I decided it would be better to start walking to town and try and hitch when cars passed. Worst case, if I had to hike the entire 12 or 13 miles to town, nearly entirely downhill, it’d “only” take another 4 hours and I’d still (barely) have time to find someplace to eat and stay. It’d be a long day, but only a couple miles more than what I’ve done the last three days.

The road, though paved, had a relatively wide shoulder, and was fairly easy to walk. I was surprised, though, that there were cows wandering in the road and through the woods on both sides of the road. Most of the time, the road had thick tree cover and hills on both sides, though shortly before I got a ride, the road had a clear view to the south.

Traffic on the road continued to be very sparse; only a dozen cars passed me going into town before I finally got a ride. After an hour, someone driving away from Encampment offered to give me a ride into town when he came back from his errand. Ten minutes later, a guy in a truck who’d passed me earlier had come back from town to see if I needed anything (like, a ride to town).

About fifteen minutes later, I was in Encampment, thanks to Ike. He dropped me off at the post office, and gave me two recommendations for lodging and food. Unfortunately, the post office had closed twenty minutes earlier, so I couldn’t pick up my resupply, and my vague hope of possibly just heading back to the trail tonight fell through.

As deserted as the road to town was, Encampment felt even more deserted. The hotel and restaurant I was recommended were closed for renovations. Another restaurant was also closed. The other place that had space — an apartment above a bar — already had other hikers. Fortunately, I was able to find a place to stay in the neighboring town of Riverside, about a mile down the road. 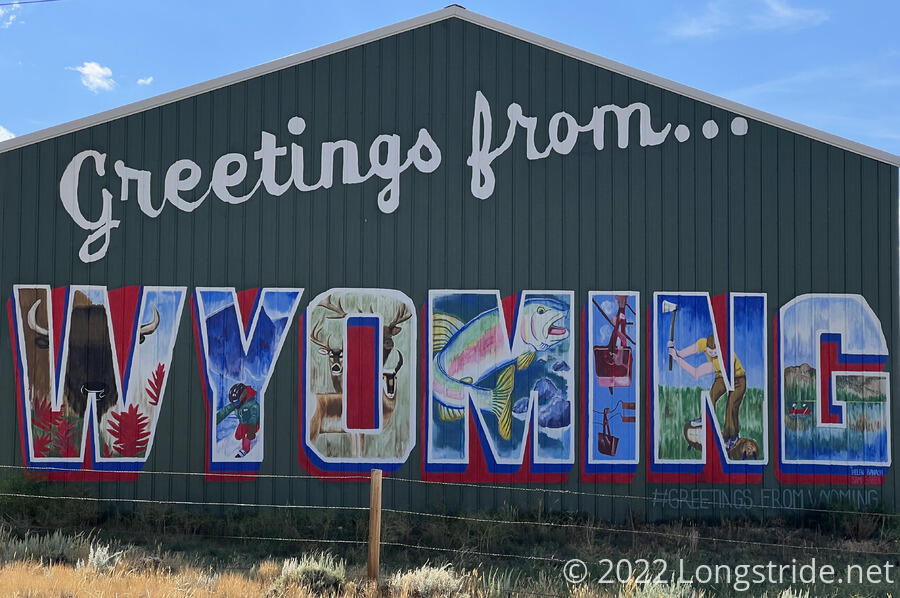 I stayed in one of about a dozen cabins at the Riverside Garage, a gas station, general store, and mechanic. The cabin had no frills and showed its age, but it was much less expensive than any of the places I stayed in Colorado.

While I was checking in, I chatted with another customer in the store, Bob, who asked how I planned to get back to the trail tomorrow. Given how hard it was to get to town, I was somewhat dreading having to try and hitch back to the trail tomorrow morning. “Well, that is the question,” I said. He then immediately offered me a ride tomorrow morning — he liked driving up to the pass for the views. We worked out that he’ll pick me up at the post office tomorrow morning at nine, giving me time to walk there and pick up my resupply box when they open at 8:30.

Conveniently located just across the street from my cabin was Bear Trap, a bar and restaurant. I got a burger and a beer, both of which were excellent.

Tomorrow, I’ll pick up my resupply and head back to the trail. The next stop is Rawlins, about 82 miles ahead, which should take me about four days.