A longer day today took me over the geologically unique Two Ocean Pass, and well on my way towards Yellowstone National Park.

I managed a much earlier start today, leaving the cabin around 7:30. With the sun still below the nearby mountains, it was nice and cool out.

A short downhill from the camp, I crossed Soda Fork, on a sketchy log bridge. 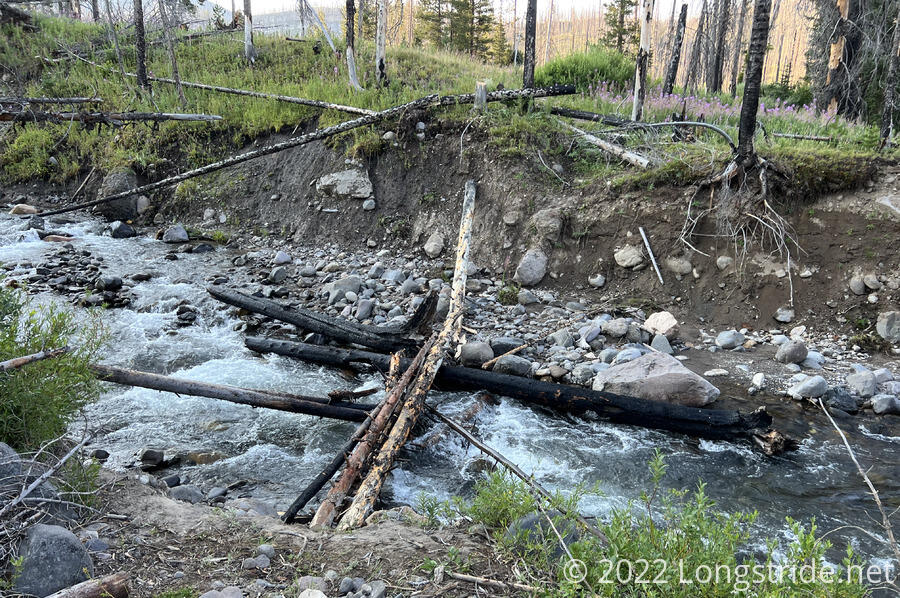 Soda Fork Crossing — A few logs provide a dry crossing over the creek.

The hordes of grasshoppers from yesterday continued their feeble attempts at avoiding me by jumping every which way to avoid me, including at my legs. One actually managed to land in my boot.

For a while, a small flock of crows flew around the area, hopping from tree to tree, and generally making quite a racket.

The major river crossing this morning was the North Buffalo Fork. There was, supposedly, a dry crossing somewhere upstream, but recalling the time wasted yesterday to find a dry crossing, I just forded the creek at the trail crossing. Immediately after making the crossing, I turned off onto the wrong trail, adding about a half-mile detour to get back to the CDT. At least it wound up being a little less steep than the trail would have been. 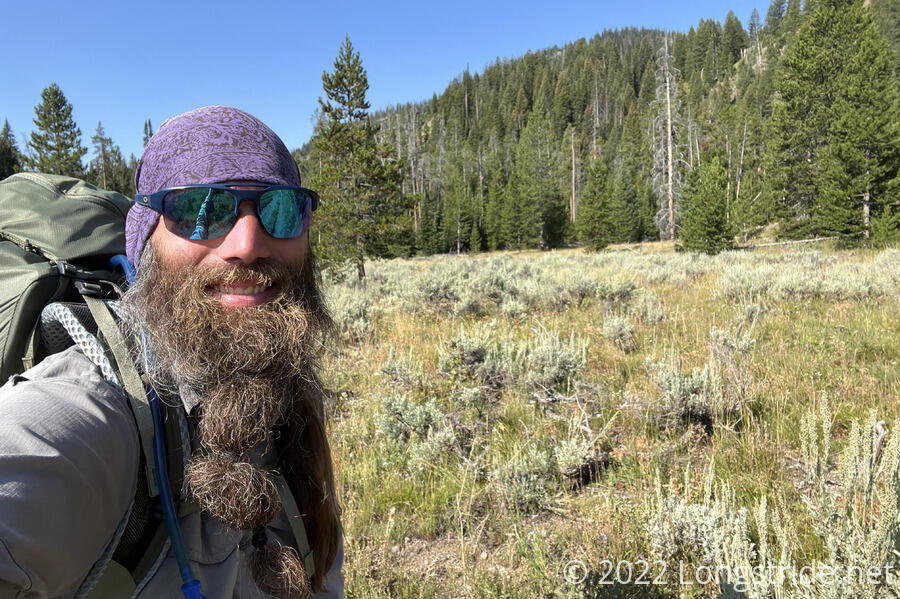 Once I made it back to the CDT, I stopped for a break. While I was having my snack, six people with eleven horses passed by. Also, a hummingbird tried to feed from my (bright red) phone case; it looked a bit confused, and then it flew off.

The trail continued through a burn area, gradually working its way up the valley of the North Buffalo Fork through a somewhat generic mountainous meadow surrounded by pines. Through the meadow, the trail split into almost a dozen parallel tracks — I’ve never seen so many tracks for one trail before. A little while later, the trail passed by a creek. I stopped shortly after for a break under a shade tree, and went back to get water. The water was quite cold, which was wonderful give how warm it had gotten with the trail being generally unshaded.

After I left my break, clouds started to blow in from roughly the direction I was heading in. I hoped that they’d eventually block the sun and make it a bit more tolerable outside. Eventually, they did, but they also grew darker, and it seemed like it would rain.

A small forest service crew — two riders with eight horses — went past; there definitely seems to be a fair amount of trail maintenance happening on the side trails.

The trail joined a dirt road, meandering through a relatively flat area. The road was in places rather flooded with water, but I was, with some effort, able to keep my feet dry as I progressed forward.

A wide dirt road winds along a ridge.

Approaching Two Ocean Pass, I took another break at a trail junction that marks the earliest split for the Big Sky Alternate. Nearby, North Two Ocean Creek splits into Atlantic and Pacific Creeks at the Parting of the Waters National Natural Landmark. The two creeks each flow into their respective oceans. It’s one of the few places in the world where one creek splits into two different drainage basins. The two creeks flow through Two Ocean Pass, which is a swamp. When flooded, it is possible for water to flow between the two different drainages, allowing fish and other water wildlife to cross watersheds when they would normally not be able to.

Departing from the trail here for Big Sky, down Atlantic Creek, would take me through eastern Yellowstone. But, one of the things I’ve wanted to do on this hike is revisit the geyser area around Old Faithful, which requires staying on the CDT, at least for the time being. So, I continued on the CDT, heading over Pacific Creek. A beaver dam built into the bridge over Pacific Creek, flooding the trail. 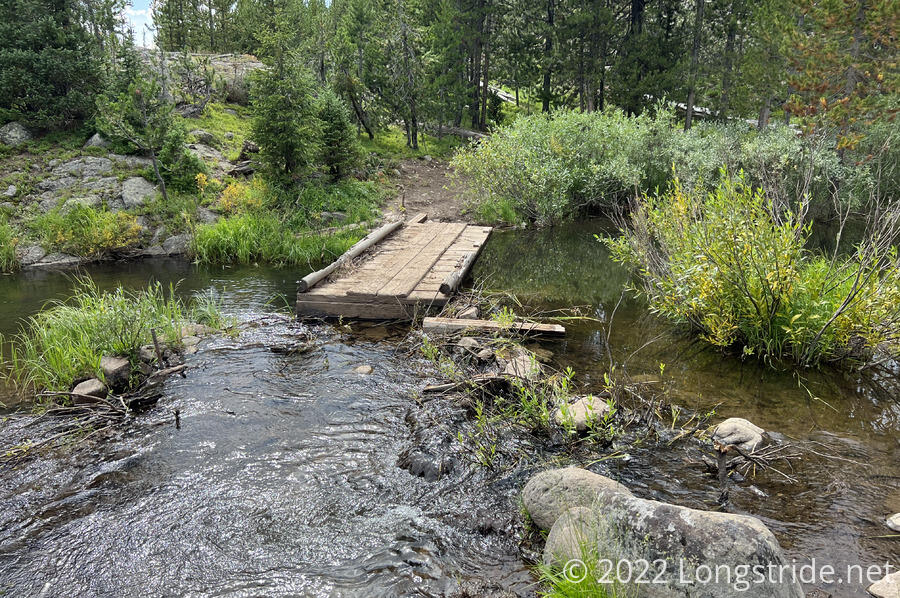 Pacific Creek — The creek has overflowed onto the trail due to beavers turning the bridge into a dam.

After passing the Parting of the Waters, the trail climbed North Two Ocean Creek for a bit, then crossed it and steeply climbed the slope of the valley it had carved. Wind picked up, and a dark cloud began coming over the mountain I was climbing.

As I climbed, I was splashed with a few raindrops as wind continued picking up. Not wanting to backtrack, I was committed to climbing a steep valley with increasing wind and a high likelihood of getting rained on. Over the mountain, rain was definitely falling, it was only a matter of time before it got to me. 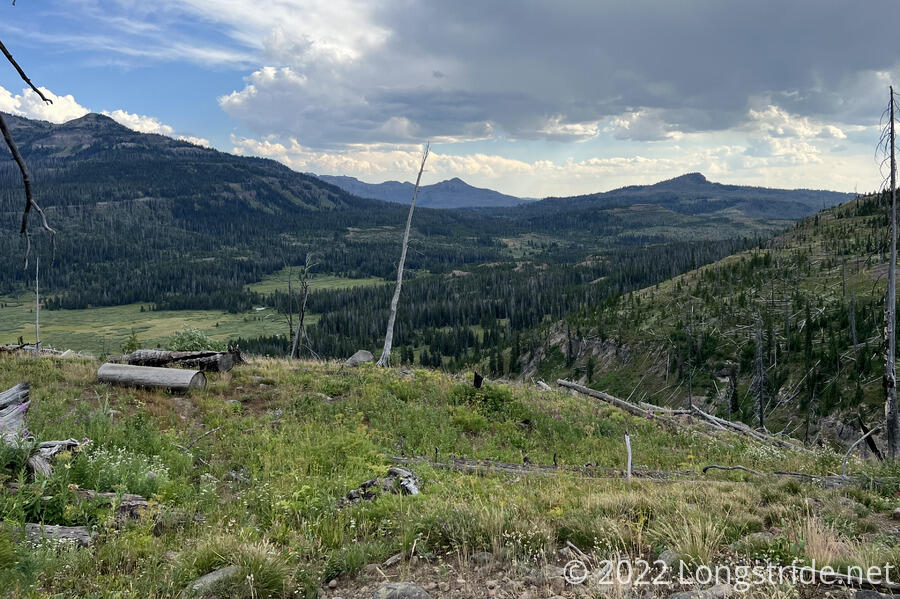 Thankfully, though, the storm blew away without more than a few scattered raindrops. The storm seemed confined to the north side of the ridge, which was perfectly fine with me. 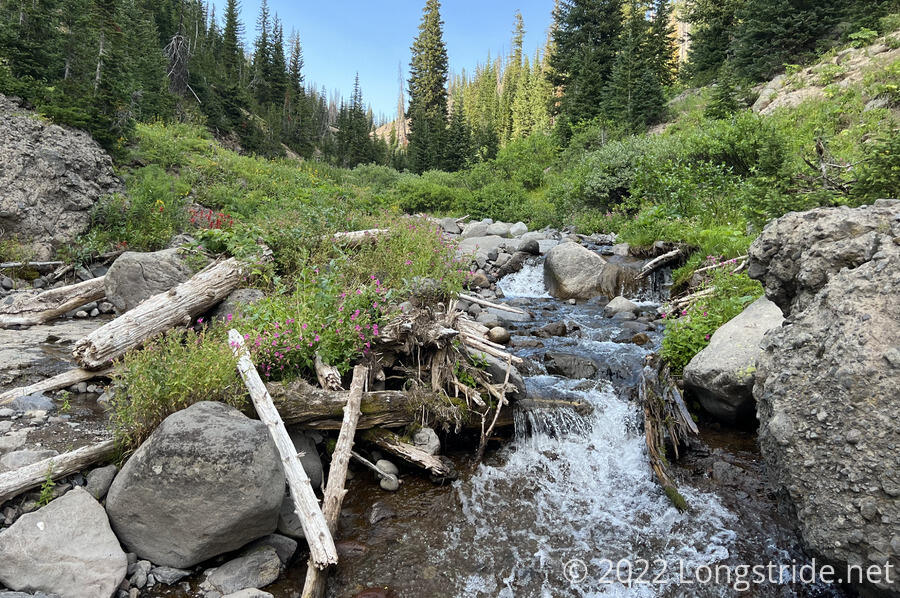 After crossing North Two Ocean Creek a second time, and then began a very steep climb up out of the east side of the creek’s valley, reaching a somewhat flat plateau with a few lakes. 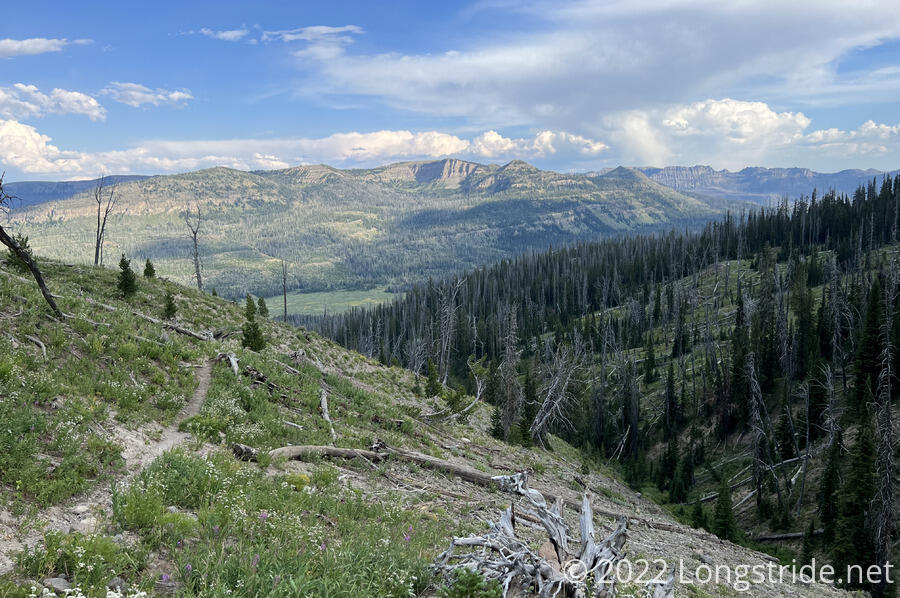 Passing three southbounders, I crested over a hill and dropped down a bit to one of the lakes, which had a halfway decent campsite with tree cover on one side. Now about an hour before sunset, I stopped for the day, setting up my tent and grabbing water from the lake to cook dinner.

The lake was well on its way to drying out, and I needed my crocks so I could venture out far enough into the lake for it to be deep enough to collect water without also collecting a ton of sediment. I was glad I took my crocs, and didn’t go barefoot; the lake bed was loose sediment, and my feet sank in an inch or two with every step.

Today’s campsite was beautiful, with open sky and a nearby lake. It’s hard to ask for better. 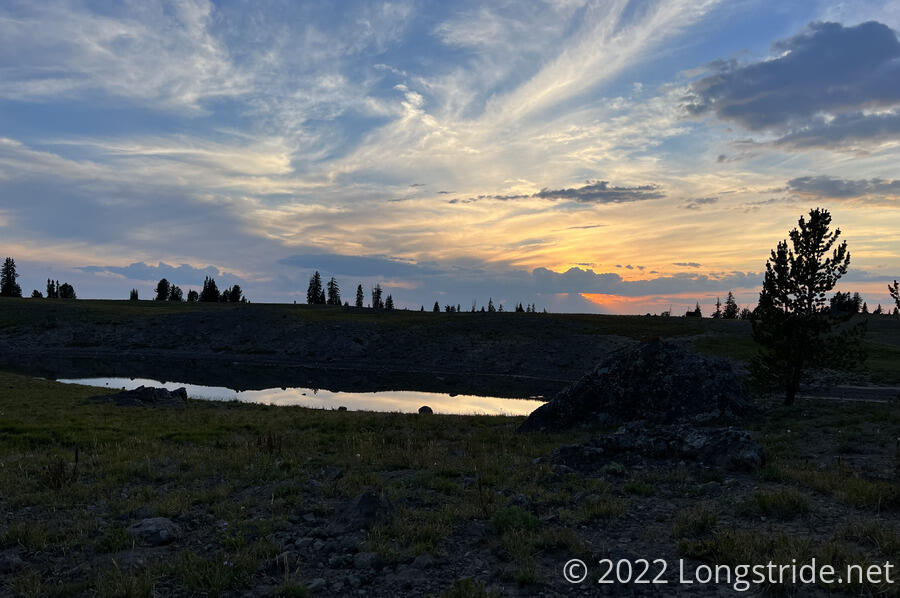 I managed about 19 miles today, which not as far as I’d have liked — I was still struggling on the uphills today — but it was far better than I managed yesterday on easier conditions. This does leave me 23 miles from tomorrow’s campsite, but it’s mostly downhill from here to there, so it shouldn’t be a problem.

Today (or rather, tomorrow morning) is the last time the trail will be over 10,000 feet (unless there’s some high elevation on the Super Butte alternate, which I don’t have a good elevation profile for). The next time I’ll be over 10k feet is when I return to New Mexico to finish the trail there.

Tomorrow will be my first of four days in Yellowstone National Park, which I’m very much looking forward to.