Waking up late in the night, I noticed it was far warmer than I expected for my last campsite at 10,000 feet, and also much drier than I expected: my tent was completely dry at 1 am, and both my tent and sleeping bag were bone dry in the morning when I got up — before sunrise, even.

Now about a week (and one trail town) away from diverging onto the Big Sky Alternate, I finally got around to actually plotting a route and figuring out its total distance. It seems as though the route I planned will save me over 250 miles, which makes a September 30 finish date at the Canadian border just barely feasible. While I knew this in general, actually working the math out relieved a huge mental burden, and when I left camp this morning less than an hour after sunrise, I probably was in the highest spirits I’ve been in in quite some time. 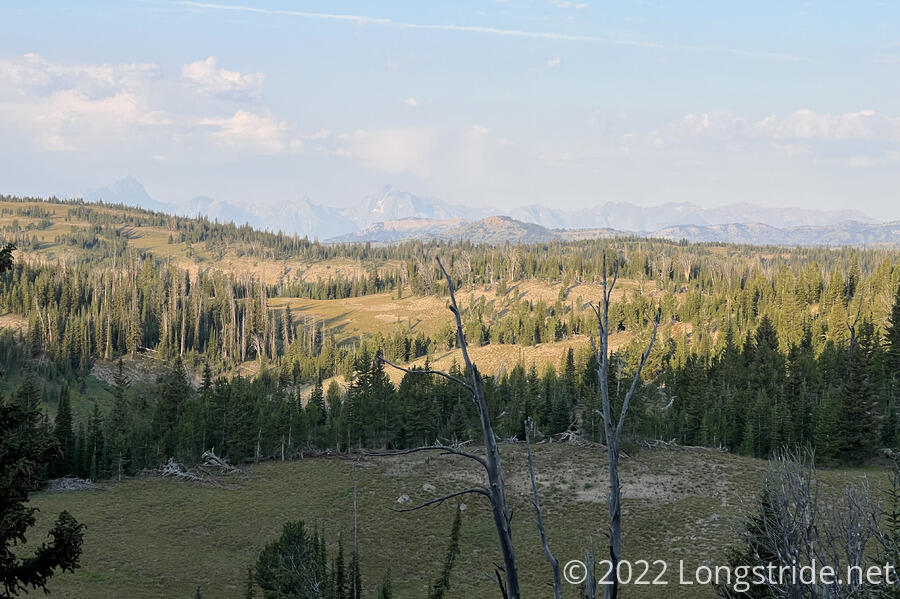 Morning on the Ridge

From my campsite, the trail dropped 1400 feet over four miles. Some of it was steep and rather rocky, but aside from a few short sections like that, the trail this morning was fairly nice. Then, with a short 200 foot uphill behind me — the longest uphill of the day — I stopped for a break. 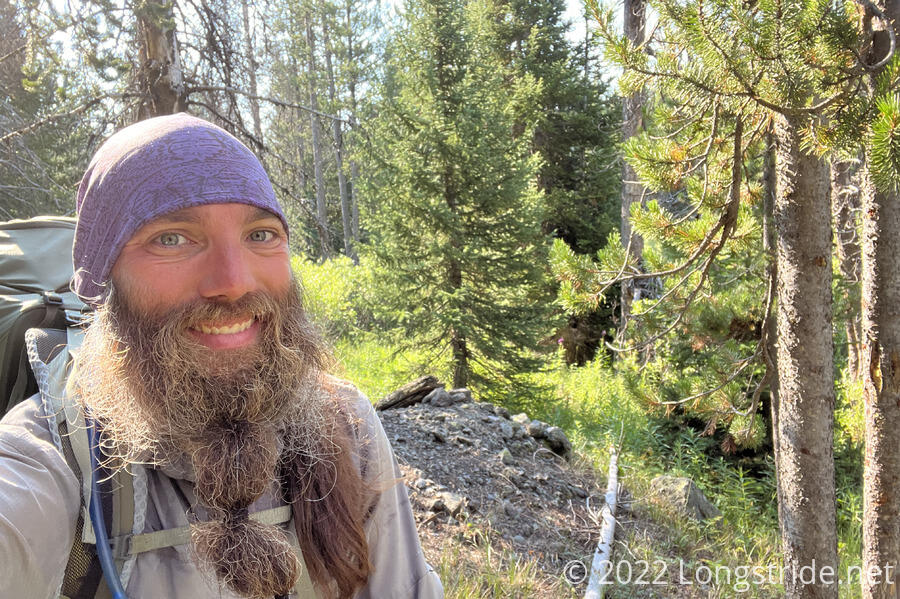 I crossed the Snake River, barely managing a dry rock hop across, and began following the river downstream for most of the rest of the day. 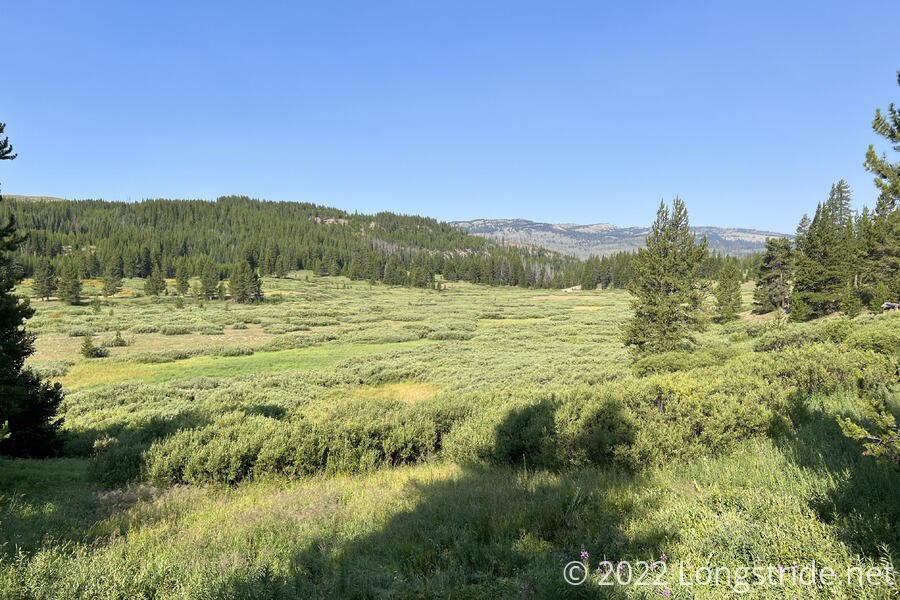 Snake River Valley — The Snake River, hidden away in its valley just below the trail’s first crossing.

Shortly after fording Plateau Creek, I entered Yellowstone National Park. The trail began following the park’s South Boundary Trail for a short while, crossing over a beaver dam on a small creek, and then fording through the Snake River, which had grown considerably thanks to several tributaries merging into it. Turning off on the Fox Creek Trail, the CDT began following the above the river, on the side of some hills.

From the higher vantage point, a few of the many wide meanders of the Snake River were visible; the river is well-named.

About two hours later, I crossed the Snake River again, stopping to briefly chat with two southbounders who took breaks on the north side.

The Fox Creek Trail continued to wind its way along the side of a mountain, increasingly high above the Snake River, as the river cut its way down the valley. Relatively light tree cover through what seemed to have been a burn area provided nice views of the valley. To the west, dark clouds started to form. 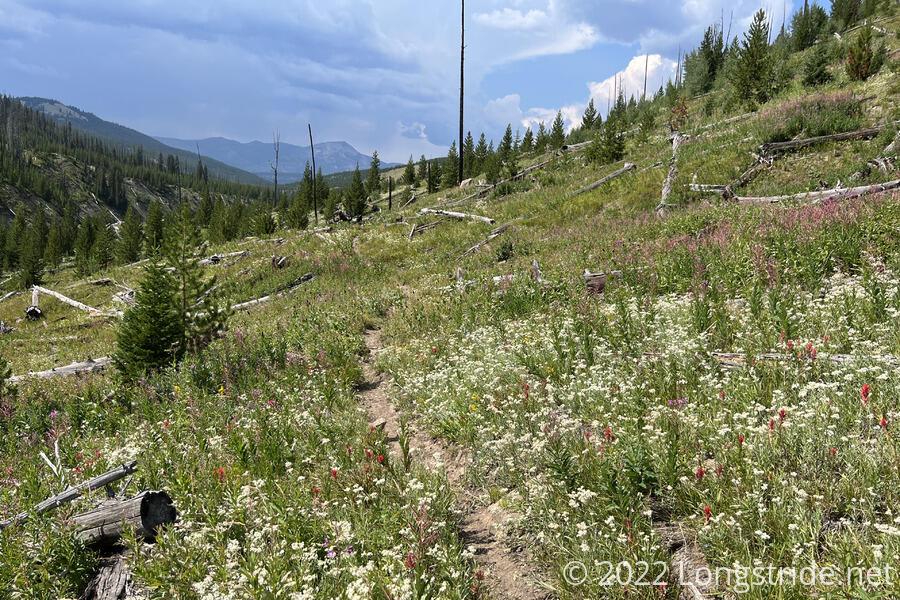 Crossing the Sickle Creek, I stopped for a break, mostly to get some more water. The holes in my shirt that formed after leaving Pinedale continued to increase, and my shoulders are getting sunburned as a result. The dark clouds forming ahead gradually moved in, finally providing some shade. I hoped it wouldn’t rain.

Later, I passed a southbounder who, unprompted, told me that Fuck-It and Velveeta were up ahead, and then wanted to know who I’d passed. I hadn’t actually gotten the name of anyone I’d passed earlier today, and it felt a little surprising to say that, but I was mostly off-guard that Fuck-It and Velveeta were as close as they apparently were — I figured they’d be a few days ahead, given I’d had two slow days and they were already two days ahead of me when I was in Pinedale.

The trail left the “forest” it had been traveling through, emerging into a meadow as the Snake River’s valley floor widened, and the trail approached an intersecting valley. Joining the Heart River Trail, I forded through the Heart River, and turned upstream along its valley.

In comparison to the fords yesterday, which were all freezing cold, today’s fords were noticeably warmer. I wonder if this has to do with Yellowstone’s volcanic nature — the park’s underground heat reservoirs could be slightly warming the creeks.

Fording Heart River again, and then crossing Surprise Creek shortly after via a log and rock hop, the trail took me through an area of overgrown grasses covering the trail-in-a-ditch. This area would be awful when wet.

I turned off the trail to head to the Surprise Creek Campground, my campsite for the night, quite surprised to find Fuck-It and Velveeta there cooking dinner at the fire pit. It turns out, they had gone into Dubois, which allowed me to catch up with them. And, it turns out we are all assigned the same campsites the next two nights as well. Talk about a surprise indeed! Shortly after, a southbounder, Teva, arrived.

The campground was recently located, and so hadn’t really been “lived in” yet. What little bare ground there was mostly confined to the area near the fire pit. Instead, most of the available camping area was on grass. It did make for a softer bed, but probably everything will be quite wet tomorrow.

Many of the campgrounds in Yellowstone have “bear poles”, for food storage. I was expecting something like the poles in Shenandoah, which have a tall pole embedded in the ground with hooks at the top that food is hung from. Instead, Yellowstone (or at least, this campsite) has a wooden bar hung between two trees. It didn’t seem especially animal-proof, but it did make for the easiest bear line throw I’ve ever had. In fact, I set my tent up nearly under it because I didn’t even recognize it as a food storage device initially!

While cooking dinner, there was some thunder and lightning, which hurried me along a bit, but fortunately, the storm passed with only a very little rain.