A long day, mostly roadwalk, took me past a rare lake formed by an earthquake.

The rain stopped last night sometime in after I fell asleep. By morning, the clouds had all gone, with a clear sky and bright sun. Still cool out it was quite damp. Fog rose from the lake near our campsite. Par for the course, both Fuck-It and Velveeta were long gone by the time I left camp. 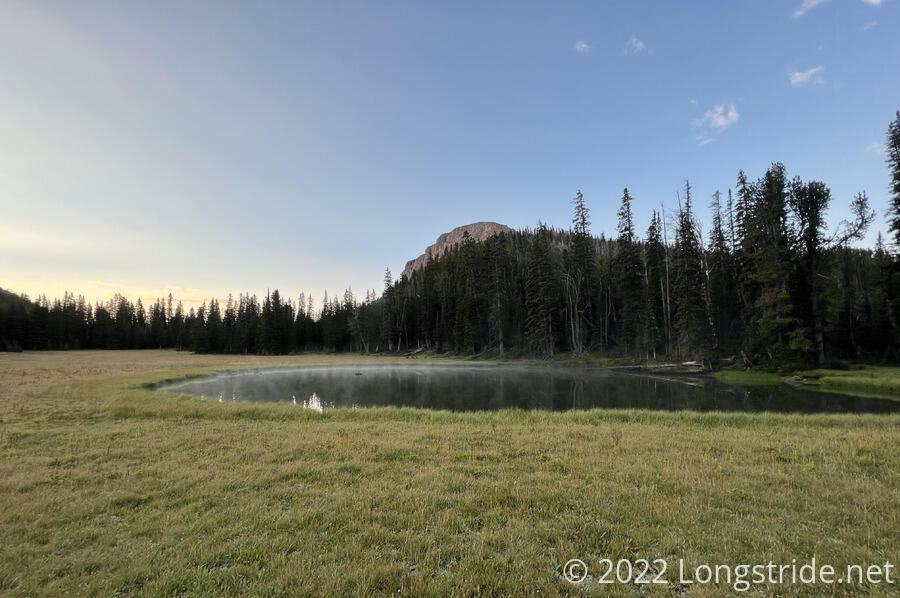 Steam rises from a lake.

After a brief initial climb from the lake, the trail steeply descended into the valley of Sheep Creek, and then followed the creek downhill, towards a trailhead. 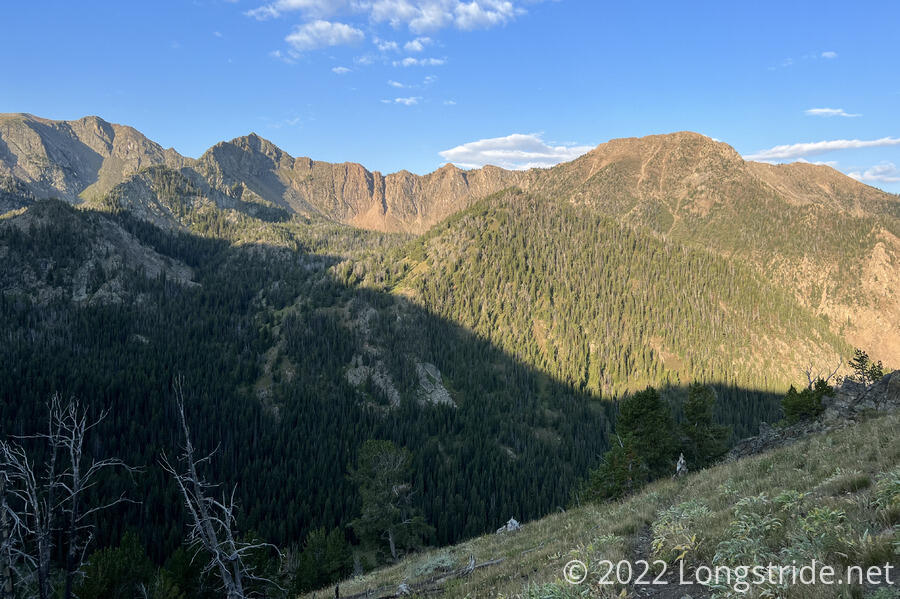 The valley started mostly as meadow, with occasional forest. As I descended, the proportion of forest increased, until I was about halfway down the valley, when the trail stayed completely surrounded by forest. A couple of nice bridges made crossing Sheep Creek easier; its flow picked up quite during the nearly 3,000 feet descent from the campsite.

Near the trailhead, I crossed a bridge and found Fuck-It and Velveeta taking a break at a small campsite near the creek, chilling cans of soda they packed out of town in the creek. Since this was about five miles into the day (and likely the last shade for a while), I stopped and joined them until they left. 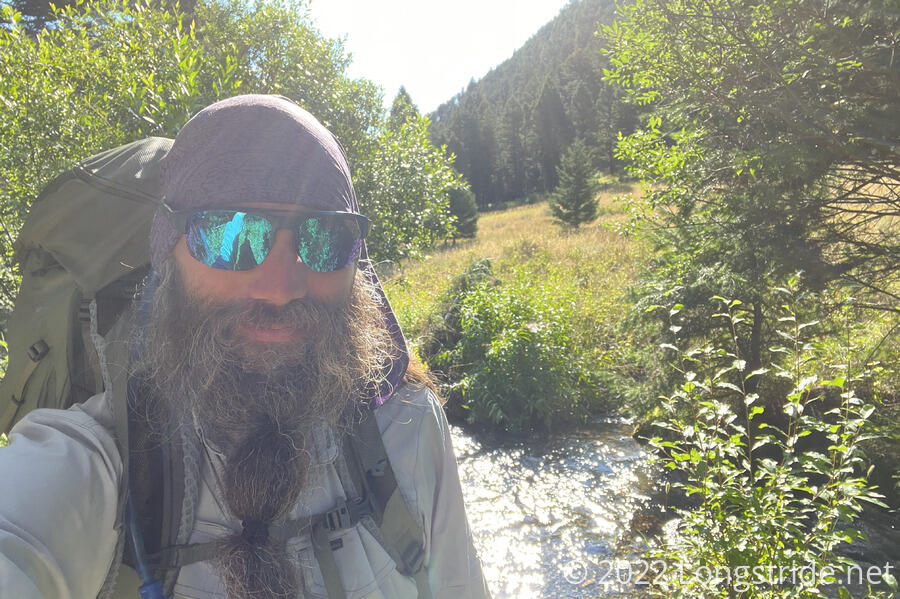 From the campsite, the trail descended to a trailhead, a dirt parking lot and turn-around loop, and then followed the dirt road out of the national forest, beinging a trek across a wide open flat area nestled between a few mountain ranges.

Leaving the forest, the trail made a miles-long “U”, following a dirt road over two miles west to a paved road, following the paved road northwest for almost two miles, and then turning east, making a roughly six mile loop to go one mile, thanks to an the Madison River, impassable save for the bridge for the paved road. It was not awesome to set off on a hours-long roadwalk just to get around a river, but, what else was there to do?

Leaving the forest, the dirt road turned due-west for two miles, nearly straight save for a couple of small kinks to work around a creek and the edge of a hill. Ahead, I saw Velveeta, and beyond him, a speck that was Fuck-It.

Turning off the dirt road onto a paved highway, there was traffic to avoid. Fortunately, the traffic wasn’t too heavy, and the shoulder (on both sides of the road) was wide enough that it didn’t feel particularly unsafe. I passed Fuck-It and Velveeta at some point along the road; I guessed they must have been going slower because Fuck-It’s leg was bothering him again. After crossing the Madison River, I took a short detour from the road, going through a campground to make use of its pit toilet. 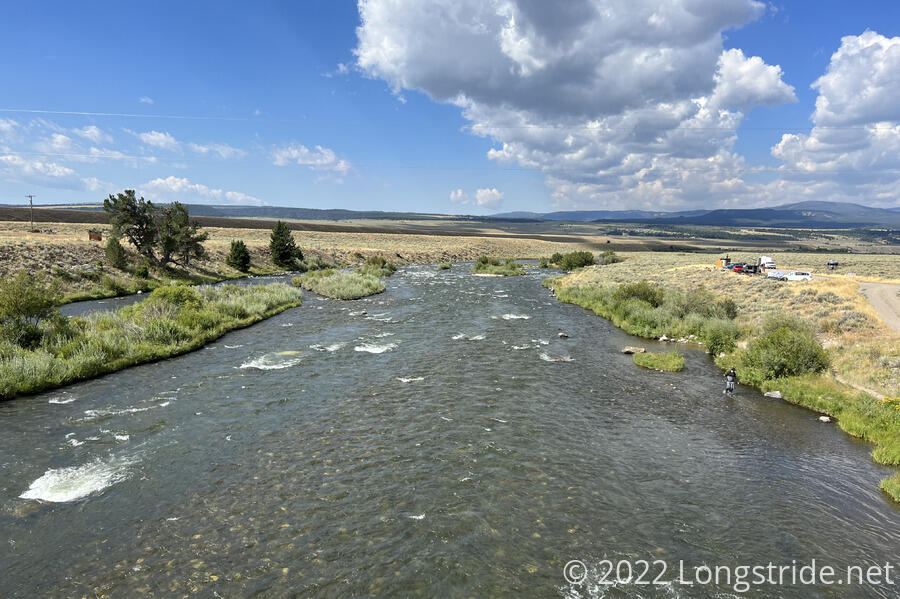 There were several RVs in the campground parking lot at Raynolds Pass, and a few families were on the river shore fishing.

Leaving the campground, I finished walking up the highway and reached a junction for another highway. At the T-intersection, a sign pointed to the left in the direction of Ennis, my next trail town. Going left here would give me a 40-mile roadwalk to Ennis. While significantly shorter than the route I’m taking, a 40-mile highway roadwalk is unnecessary torture. I turned right, following the highway east. Not seeing Fuck-It or Velveeta, I picked up the pace a little, assuming they were somewhere ahead of me.

After a mile and a half, I passed an inn with a general store that had a large sign advertising cold beer. Wanting something cold to drink — there were few clouds, and the road offered little shade — I stopped inside to get a bottle of soda, and stopped for a snack break a bit later.

Shortly after leaving the store, I entered the Earthquake Lake Geologic Area. Over the next several miles, a series of interpretive displays described the aftermath of a 1959 earthquake. The earthquake caused a significant landslide, killed 28 people, and damming up the Madison River, which began flooding, forming the new Earthquake Lake. The Army Corps of Engineers had to come in and cut a new channel for the river, so that the growing lake wouldn’t overflow the landslide dam, causing a potentially catastrophic failure. Since then, a visitor center has been build atop the landslide. (I didn’t visit; it was at the top of a hill, and with displays conveniently located on the road, I was more focused on hiking distance.)

In the water, a short distance from the road, several stands of dead trees, bleached white by the water and sun, stood as a reminder that the lake hadn’t always been there. 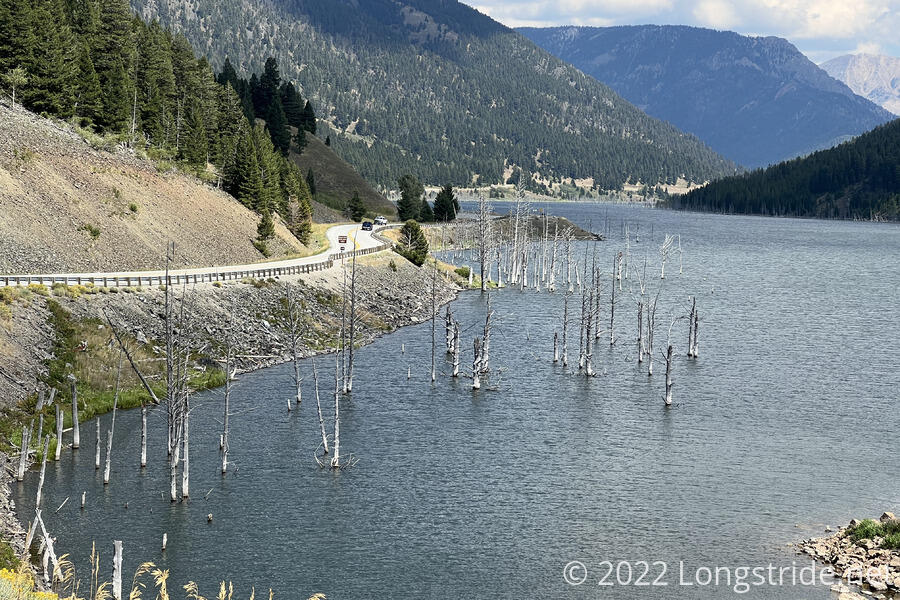 Dead trees near the shore of Earthquake Lake provide a reminder that the lake wasn’t always here.

Currently 120 feet deep, the lake is gradually draining. As the flow of the river gradually deepens the river channel cut through the landslide, the surface level of the lake will drop, until eventually, the Madison River will resume a course somewhat resembling its course before the landslide.

After a few miles along the lake, the road diverged from the lake shore. A cyclist who’d passed me earlier in the day stopped to chat. He’d seen several other hikers today (which I interpreted to be Fuck-It, Velveeta, and someone else besides that), and was curious why we were all walking along the road. I told him what we were doing; he was suitably impressed.

Just after talking with the cyclist, I turned off the highway, taking a dirt road north up into a valley. Had I continued along the highway, I would have passed by Hegben Lake (which I saw from a distance yesterday), and eventually gone into West Yellowstone. Had I walked into West Yellowstone as I’d originally planned, I would likely have left town that way, and I’d have completely missed Earthquake Lake.

I was happy to be off the paved road. My feet weren’t very happy with it, but at least there wasn’t very much traffic, and the scenery was pretty good.

I followed the dirt road uphill, passsing by several car camping spots and roughly following a creek. I stopped for a break after a few miles, on a small hill next to the road. One of the few cars that passed by stopped, and someone walked back up the hill to talk with me. It was a hiker I’d previously met (though I must admit, I totally didn’t recall the encounter). We chatted for a little while; he was off-trail for a few days hiking with his brother. He asked if I needed anything; I said “soda or beer”; he said that’s what they were going into town to get. He also did not seem to have seen Fuck-It or Velveeta, which was concerning to me, because if they weren’t in front of me, then they were now somewhere behind, and I wasn’t sure where I could have passed them.

Continuing up the road, I passed many more campsites, nearly all of them meant for car camping. A truck passed me as I neared the gated side-road to a cabin; I chatted with the couple as they unlocked the gate. Finding out I am a CDT hiker, they were surprised that the trail ran through the area. (Which, of course, it doesn’t, and I explained in more detail. I suspect I’m going to have a lot of similar conversations with people over the next week or two.) They warned me that the area is “beartastic”, and then asked to make sure I actually had bear spray — they were willing to give me theirs if I didn’t have any. But, they said the area up ahead is very beautiful, with plenty of camping opportunities, so I shouldn’t have a problem finding a campsite tonight. They also gave me a beer, which, at least, will help with the water situation tonight. They also confirmed that they saw two other hikers a mile or two down the road, one of which was definitely Fuck-It.

I continued on uphill, stopping for a break at the trailhead at the end of the road, and decided to wait a while for Fuck-It and Velveeta. However, after sitting in the shade for almost an hour, with no sign of them, I decided I needed to move on; daylight was quickly dimishing, and I still needed to get water for dinner, which the trailhead didn’t seem to have. (Later, looking at the map, I could probably have found a way down to the creek the road had been following, but at the time, it seemed like the creek was too far down a steep hill for that to be a worthwhile plan.)

Leaving the trailhead, I continued uphill on the Lightning Lake Trail, heading towards Lightning Lake at the top of the climb. Ideally, I’d make it there to camp tonight. I continued uphill, and stopped to get water at the first substantial creek I crossed. This was glacially slow; it took over an hour to filter two liters of water. I wanted more water than this, since I also needed to put more water in my pack bladder, but sunset was now half an hour away, and I needed to find a campsite. (I was glad I bought the soda and got a free beer, but I wish I’d bought a second bottle of soda.) Also concerning was that Fuck-It and Velveeta didn’t catch up.

In forest from the trailhead, past the creek, the forest started to thin a little, and occasionally crossing slightly damp meadows.

Shortly before sunset, I found a “campsite”. It was conveniently located right next to the trail, but it is not actually a flat or level area, and is covered with plants. Not having much other choice, though, and being flat and level enough, I went with it. But at least it’s surrounded by a pine forest, and it’s warmer than I expected it would be, so hopefully that’ll also make tomorrow morning a little bit warmer.

I only cooked the mac & cheese half of dinner, not cooking the ramen to save water. With the trees around, once the sun set, it got very dark, very quickly. And, after being in a somewhat sour mood with how slowly my water was filtering, I didn’t really want to cook dinner anyway. With it being so dark, and with the forest being somewhat tight, I was a bit on edge, I wound up cooking dinner and hanging my food bag far closer to my tent than I wanted.

I hiked somewhere around 23 miles today, which was good, but a little less than where I wanted to be (which was another couple of miles uphill). I’ll just have to catch up tomorrow. Hopefully I’ll get cell service sometime tomorrow so I can figure out what happened to Fuck-It and Velveeta.