A rough hike today departed me from the official CDT, embarking on the Super Butte alternate towards Ennis, and ultimately, Butte, MT.

Tired from spending most of yesterday evening dealing with chores, I was slow this morning. I rolled out of our motel around quarter after nine, and got breakfast at a coffee shop down the block from the motel. Then, I went across the street to the grocery store, where I finished my resupply for five days to Ennis, MT. After repacking my food, Fuck-It, Velveeta, and I made our way to the post office. On the way, I stopped back at the outfitter, looking to see if they had a replacement water filter I could use, since mine is on the verge of becoming useless. Unfortunately, they didn’t have any that were usable for my needs.

Near the post office, we passed auto body shop. One of the employees there recognized us as hikers. We chatted briefly, and they asked if we needed anything. Not really expecting anything, I said we needed a ride up to the pass, once we finished with the post office. They pondered it for a few seconds, and said yes, much to my surprise.

The post office was just a block away, so we were able to finish that quickly — I sent home the extra pair of boots, as well as couple of small things taking up space that I didn’t really need.

Back at the auto shop, Craig was happy to give us a lift back to the trailhead. We also learned that his son had hiked the PCT the same year Velveeta did, and they had met in SoCal. Small world! (Inspired by the trail magic his son got on the PCT, he started providing trail magic to hikers on the CDT. Judging from the log book he had in his car, he gave quite a lot of hikers rides to the trail.) 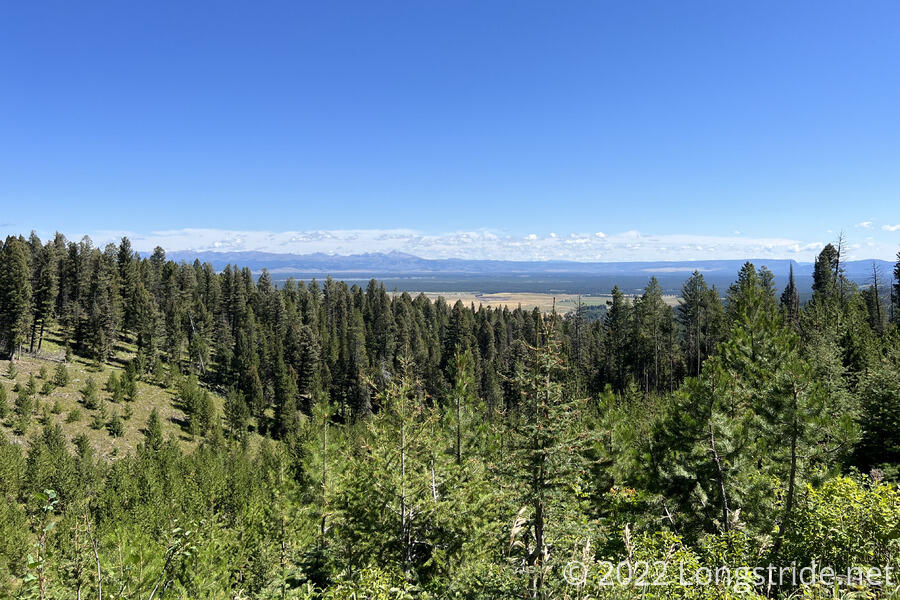 Heading north from Targhee Pass, the trail was actually rather steep. The five days of food in my pack was a bit heavy, and my pack didn’t sit quite right, pushing rather hard into my lower back. For a while, every step I took sent a shot of pain down my right leg. It was also a bit hot outside, and a good portion of the dirt road we followed lacked tree cover, so it was somewhat tiring. We stopped for a break under a tree after only two miles, just as the dirt road we were following started to peter out into doubletrack.

Fuck-It and Velveeta changed the plan we’d discussed yesterday slightly, diverting us from the CDT earlier than I’d expected. Eyeballing the map, the new route seemed a little bit shorter, with less elevation gain, but it also meant that the only time I was in Idaho today was about a tenth of a mile as the dirt road leaving Targhee Pass switchbacked up the hill. From here north, the rest of the trail is in Montana.

Clouds form to the east.

From where we stopped, I followed a faint trail across a clearing, following an old alignment of the CDT to a dirt road. At an intersection, the trail on my map diverged from the apparently reality on the ground. What on my maps was some kind of road was actually a bushwhack up a hill through forest. Possibly the map was simply inaccurate, or the roads moved over time, but after a short bit of annoying bushwhack, I did find the road I meant to be on.

The road continued climbing along the side of a mountain. The CDT was further up, running along the ridge, but I still had some nice views to the east, towards Hebgen Lake and the area around West Yellowstone. 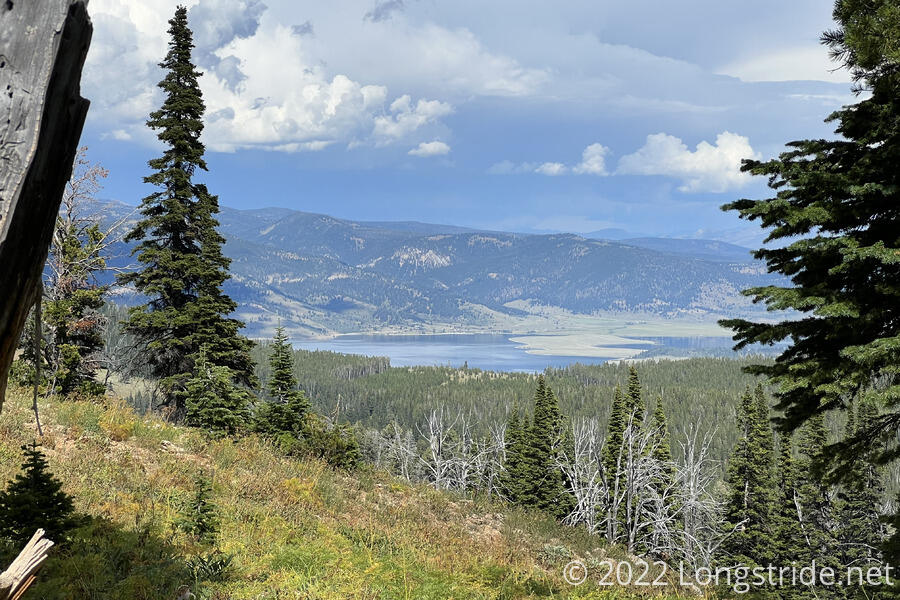 View east towards Hebgen Lake, as dark clouds blow in.

The road I followed, clearly meant for ATVs (several passed me today, going in both directions), diverged significantly from my map, mostly by adding switchbacks to reduce the steepness of the hills. I appreciated the less steep road, but it did mean that I don’t actually know how far I hiked today. I’ll be able to figure it out once I get home and clean up my the gps traces I’m recording, but until then, I’ll just have a rough estimate from my maps. 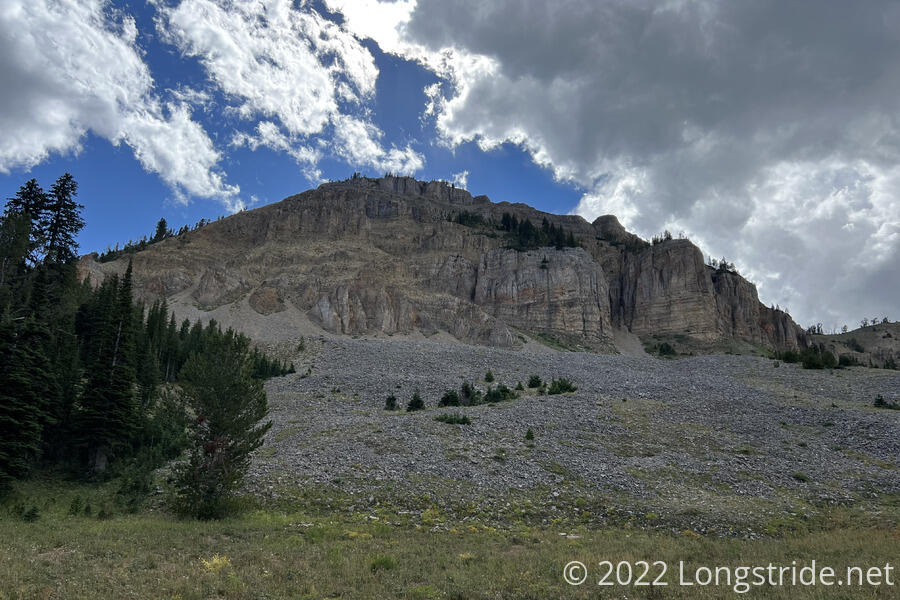 A rugged mountain sheds talus above the trail.

The road’s status as an old alignment of the CDT was clearly on display; a few old wooden CDT markers remained on the trail, left standing long after the CDT itself moved elsewhere. 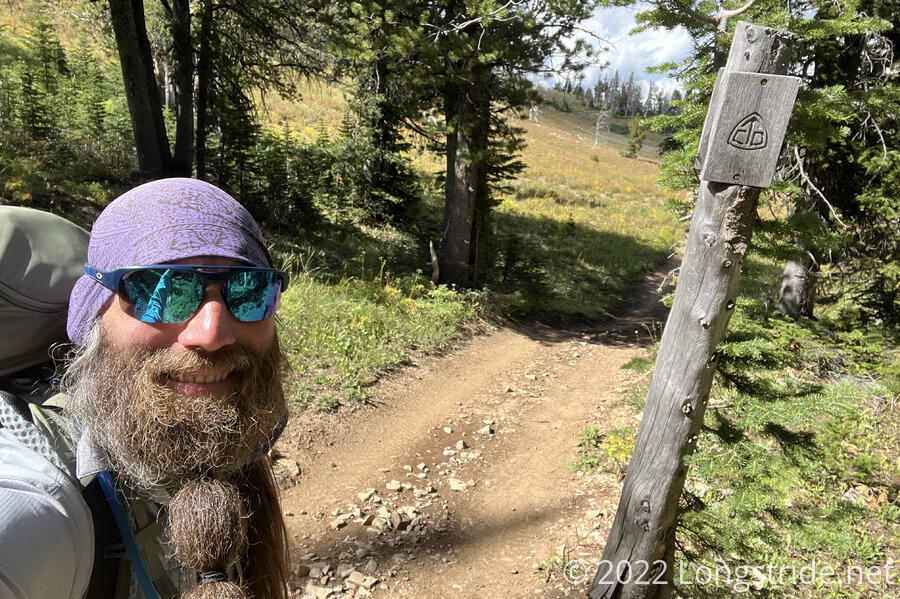 Day 113 Selfie — An old marker on the Super Butte Alternate reflects an old route of the CDT.

Along the road were lots of grasshoppers, which by wouldn’t be unusual as of late. However, instead of trying to jump into my boots, many of the grasshoppers I saw were eating each other. (My guess is they were opportunistically feeding on grasshoppers killed by the ATVs that have been on the road.) I knew this was a thing that grasshoppers did, but it was a little surprising to see it in person.

As the growing clouds darkened, I departed from the ATV road, joining a trail that climbed over a ridge and then steeply dropped down a valley to the Watkins Creek Trail. At a signed junction, the trail led south towards the CDT (which is where I expected to be departing from the CDT), and north, towards a trailhead.

Following north, downhill towards Watkins Creek, the trail brought me through a relatively flat meadow, crossed by several creeks. It seemed a bit grassy, but camping would probably be feasible there. Further down, I departed from the trail to bushwhack to Watkins Creek, crossed via a log jam, and up the hill through the forest on the other side to join the Coffin Lake Trail.

The bushwhack was significantly more trouble than it needed to be. I should have just picked a direction and headed straight uphill, but I tried to be a little too clever and also “head forward” as well, which led me through a giant mess of a bushwhack. A somewhat thick forest of thin trees, soggy bushes, and soggy ground (that wasn’t always clear to see) made for frustratingly slow progress, as I had to climb over or under several large fallen logs. I soaked a boot trying to cross a creek, and wound up meandering around following ribbons tied to some of the trees, but which they actually leading anywhere in particular. Eventually, though, I reached the trail I was looking for, and continued climbing up the mountain.

Joining another trail, I started heading towards and then up a creek valley on the north side of Coffin Mountain. The sun had all but disappeared behind the clouds, and a cool breeze gradually increased.

When a light rain started, I stopped to put on my pack cover, and discovered that my water bottle, which had already twice fallen out of the side pocket on my pack, had fallen out again, most likely during the bushwhack. (With the new pack, it never really felt as securely placed as it was in my old pack, and I was still figuring out how best to place it.) By this point, I was probably three miles away from where it had likely fallen out, which meant going back to look for the bottle was really not something I had neither the time nor energy for. (And, even though I did have a gps track of everywhere I went, actually retracing my steps through thick trees and brush would have been difficult. Nevermind that sunset was now only 45 minutes away.) Dejected that I’d lost one of the few pieces of gear that had been with me on nearly every long-distance hike I’ve done, I trudged up the hill.

Climbing up through a clearing, the trail occasionally became a bit indistinct, with cairns somewhat helping with navigation. The trail eventually lead to a small lake, where Fuck-It had already set up camp and was cooking dinner. With daylight waning, I set up my tent quickly, and then set about collecting water for dinner. Velveeta arrived while I was setting up the water filter; sadly, he did not see my water bottle (which, to me, confirmed that it was lost in the bushwhack, and not somewhere on the trail).

Dinner started late. I’d expected to use the liter of water in my water bottle to be able to start cooking dinner while my water filter slowly filtered water for tomorrow. (Drinking water for dinner, and today’s breaks wasn’t a problem; I carried two bottles of soda with me out of town, as has been a habit this trail. Otherwise, it would have taken me even longer to have enough water to start cooking.)

The lost (one liter) bottle isn’t a critical loss — I have two more flexible two liter bottles (and the three liter bladder in my pack), so I’m not hurting for carrying capacity. But the lost bottle was hard-sided, which made it ideal to drink out of during breaks. Fortunately, I have two (now empty) soda bottles, which can take its place until I can find a new one.

Light rain started after I finished my first course of dinner, macaroni and cheese. With being in town this morning (and thus a relatively short day hiked, somewhere around 14 miles), I skipped the ramen portion, quickly cleaning up so I could get in my tent and out of the rain.

Despite todaying being steeper than I anticipated (and losing my water bottle), I had a pretty good day. After I retreated to my tent, the rain picked up, and some lightning quietly flashed. We were fairly exposed, near a lake with no useful tree cover, so if there was a storm, our tents were going to take the brunt of it. Hopefully, tomorrow will be a better day, though I say that with caution, since a significant portion of tomorrow will be roadwalk.

One thing I’ve been pondering over the last few days is what exactly to call the alternate we will be taking. “Big Sky” doesn’t seem right, since we’re not going through Big Sky. And “Super Butte Cutoff” also has the same problem as Big Sky — it describes a network of alternates, rather than just one. So, since I think the route we’re taking is going to be rougly the shortest reasonable route to take to Butte, I’m going to call it the “Butte Express”.