A relatively short and hot day got me to a nice campsite about a third of the way from Ennis to Whitehall.

I again got breakfast at Yesterday’s Soda Fountain, since it was still the only reasonable restaurant open. I had a slice of pie for breakfast dessert, but it sadly wasn’t as good as yesterday’s. After checking out, I went across the street to hitch back up the highway to where I left off. I saw Fuck-It coming back from the grocery store; he says his foot is doing better now.

It didn’t take long to get a ride back to where I left off, but the driver seemed a little surprised that I wanted to get off right at the highway, rather than go further down the road. But, again, trying to have a continuous footpath doesn’t allow taking a car up the “trail”.

After a long, continuous downhill going to Ennis, today is a long continuous uphill. “Aided” by a late start (10:30 am), no shade, and warmer temperatures than Monday, it wasn’t my fastest or longest roadwalk today. But, it was progress, at least, towards today’s planned campsite at Upper Sureshot Lake.

Two miles later, the road became dirt, and would remain that way for the remainder of the day.

For most of that distance, I felt something odd in my boot. I was able to ignore it for a while, but by this point, it became annoyingly bothersome, and the last thing I wanted was to encourage a blister to form. Sitting down to take off my boot, I found a hairband that I’d spent five minutes looking for this morning. Somehow, it fell off the desk in the motel room and fell into my boot. A black hairband, misplaced in the black insides of a boot, in dim indoor lighting, was never going to be easy to find. 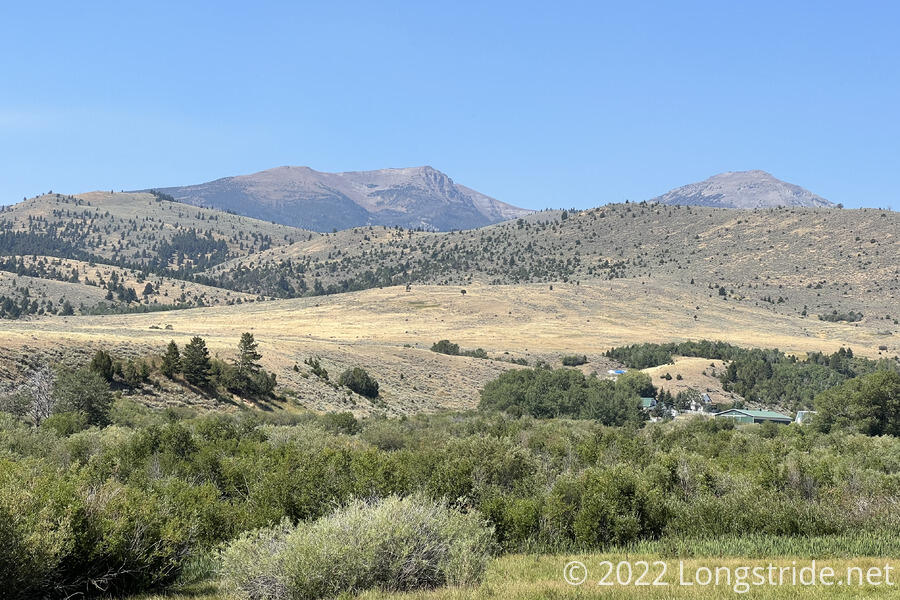 A view towards the Tobacco Root Mountains.

The road continued to wind its way through a relatively flat valley, gradually working its way uphill towards the Tobacco Root Mountains, another of the many small mountain ranges in Montana. Fuck-It and Wild Man passed by in a car; the driver stopping to offer me a ride. Five minutes later, a guy going back towards Ennis stopped to ask why, all of a sudden, over the last few weeks, there’s been a lot of hikers out.

After about five miles, I stopped for a break under one of the few shade trees I’d passed all morning. Quite hot out, the shade (and the break) were very necessary.

About half an hour after I left my break, I passed Pecorino and Lush, who were taking a break under trees in a ditch next to a creek below the road. I would never have seen them, had they not called out while I was passing. 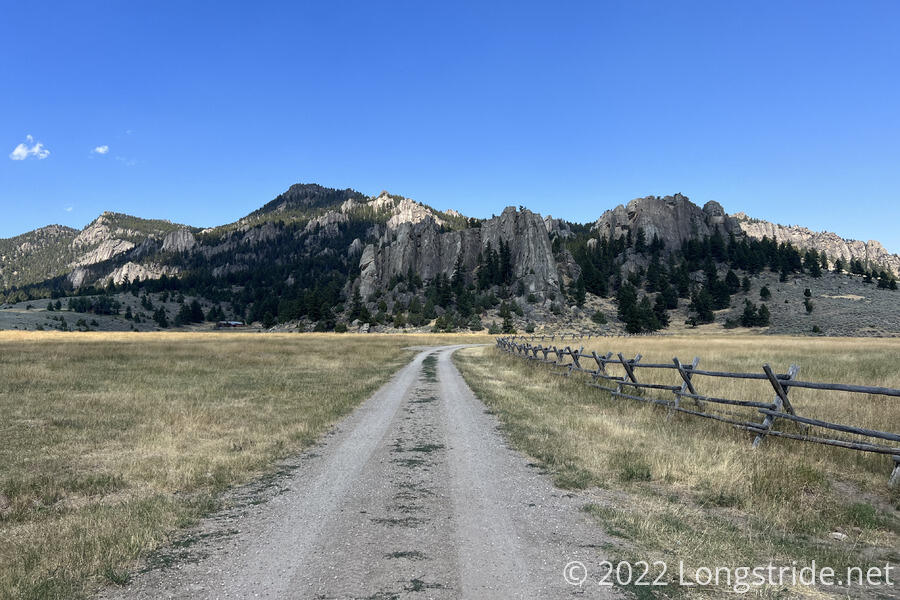 A dirt road leads to the Tobacco Root Mountains.

The sun continued to be fairly oppressive throughout the early afternoon. Some clouds passed across the sun, which was nice for the few minutes they were there. Afterwards, a nice breeze kept things cool for a few minutes, and then it warmed right back up. The road continued to slowly climb into the mountains, passing the occasional house or ranch.

Shortly before I reached the national forest boundary, I passed a sign that said, “Please return groomer snowmobile. Put it here.”. There was no snowmobile. I wondered how much snow the area got in the winter.

I also briefly chatted with a forest service employee heading towards the forest in his work truck. He said he’d offer a ride up, but he’s not allowed. (Not that I’d have taken him up on the offer.) He also said he’d been meaning to put a cooler with drinks in his truck since he’d been seeing hikers recently, but he didn’t have any to offer now.

Entering the Beaverhead-Deerlodge National Forest, I stopped for a break at a small campsite next to a creek and some shade. Not quite five miles since my last break, I was a little disappointed, but reminded myself that it was really hot out. I took the opportunity to filter water, and wound up essentially taking a two-hour siesta, joined by Pecorino and Lush once they arrived. 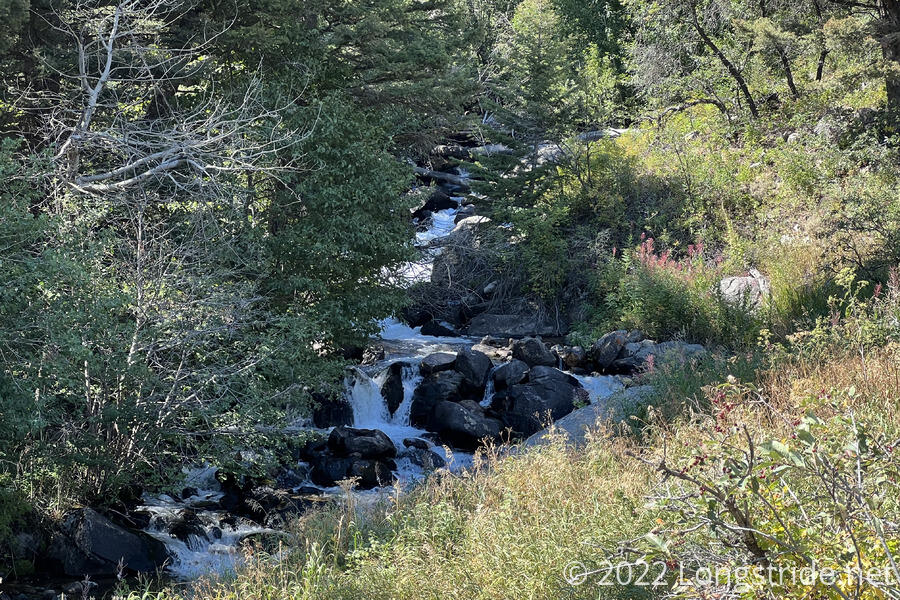 The road continued slowly winding uphill. In the hot sun, I was pretty sluggish, but at least I knew where I was camping tonight, so I wasn’t worried about finding a campsite. (Not that that would have been a problem; the road passed many flattish areas that would have worked as campsites, and many smaller roads led off to car camping areas.) 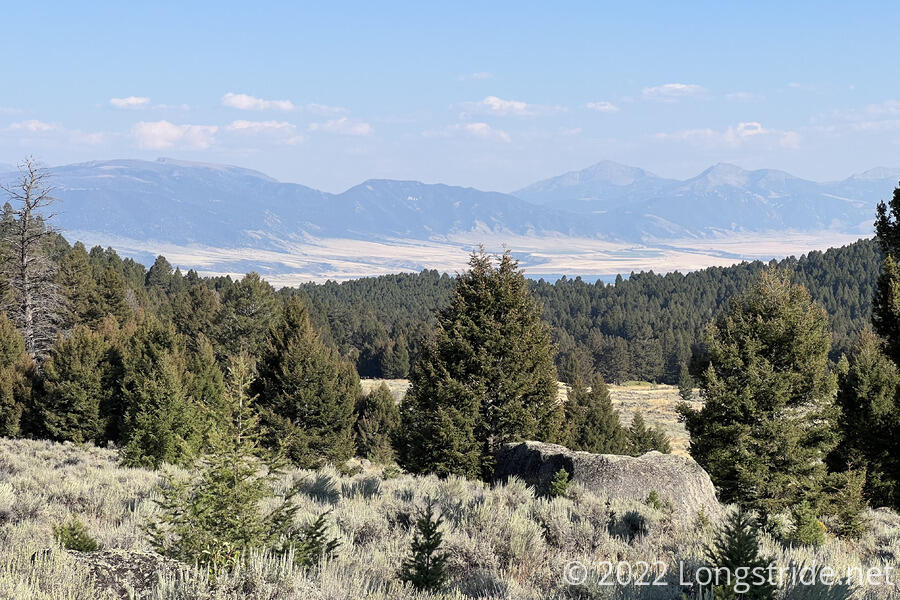 View southeast towards Ennis Lake and the Spanish Peaks.

Eventually, I made it to the road junction to one of the campsites at Upper Sureshot Lake, where I could see Fuck-It and Wild Man already set up, having been here for hours. Besides getting a ride a good portion of the way here from Ennis, they also received several beers, which they were cooling in the lake. The campsite is a grassy area, which will make for a soft, comfortable night, but may well be wet from condensation tomorrow morning.

Sprouts, Velveeta, and Recon arrived about half an hour after I did, having gotten a ride from town by a trail angel, who sat with us for a while and shared with us a large beer they brought. Stumblebee is apparently not feeling well, and is skipping up to Whitehall.

Tomorrow is going to have a fairly significant several thousand foot climb, and and even larger descent. I’m hoping I can get the climb out of the way before noon so it’s not too hot.

The rest of the group is planning a different route to Whitehall than me, shorter, but requiring a hitch to and from town, rather than hiking directly into town. I’m not sure how I feel about that, but I’ll keep it in mind as a possibility.