The best day in Glacier so far, I crossed two passes and pushed an arduous 23 miles through epic scenery. Without a doubt, today had some of the best views of the entire CDT.

With 9,500 feet of elevation change by going over two passes today, I knew going in it was going to be a long, tough day. Fuck-It, Sprouts, and Wild Man opted to take a shortcut, roadwalk Going-to-the-Sun Road to a shortcut to the campground, cutting out ten miles and 2,900 feet of elevation change. However, after already cutting out a lot of mileage going through the Bob Marshall Wilderness, I didn’t want to keep cutting out huge chunks of trail, especially in what was clearly the most beautiful section of trail. So, a long, hard day it was for me.

Leaving camp, I immediately made a wrong turn, heading downhill instead of uphill. Fortunately, I checked my map as I habitually do a little while after leaving, and realized I was going the wrong way. In the end, this only cost me 15 minutes and six tenths of a mile of extra hiking, but it wasn’t an auspicious way to start the day.

Now going in the right direction, I began a steep uphill from the campground, starting a six mile climb to Piegan Pass. The first landmark was crossing a parking area and trailhead on Going-to-the-Sun Road. A shuttle stop there would have provided transportation around the park a few weeks ago. But despite the park starting to shut down, the parking lot was full, and there looked to be at least a few people who camped from their cars, cooking breakfast on car-camping sized grills and stoves. Conveniently for me, there was a trash can, and I took the opportunity to rid myself of two days worth of trash.

Past the road, the trail continued to climb along the western side of Going-to-the-Sun Mountain. To the southwest, a somewhat isolated and very prominent Heavy Runner Mountain rose from the other side of the valley containing Reynolds Creek. 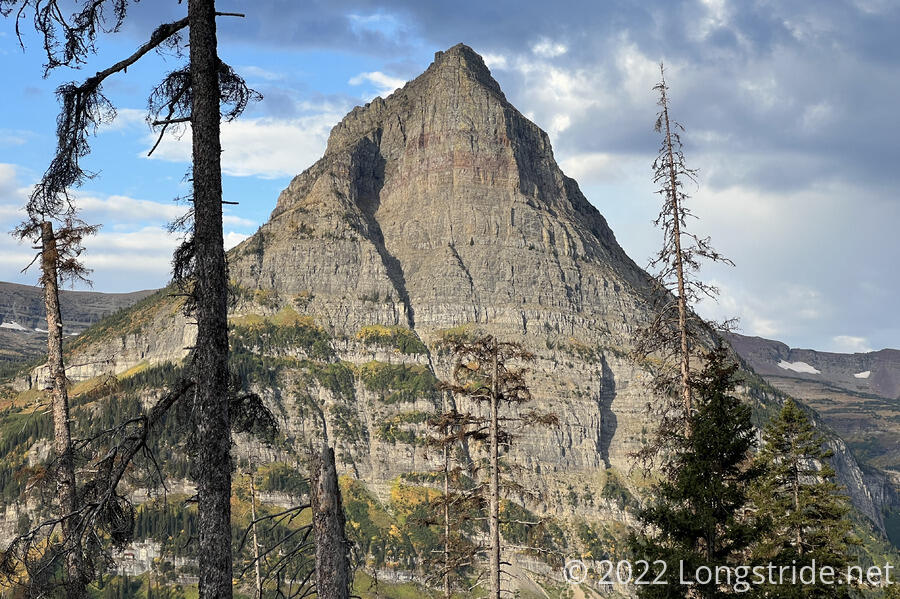 A bit further up, I crossed Siyeh Creek, which in flowing downhill, had cut down to the bedrock, exposing large slabs of rock. 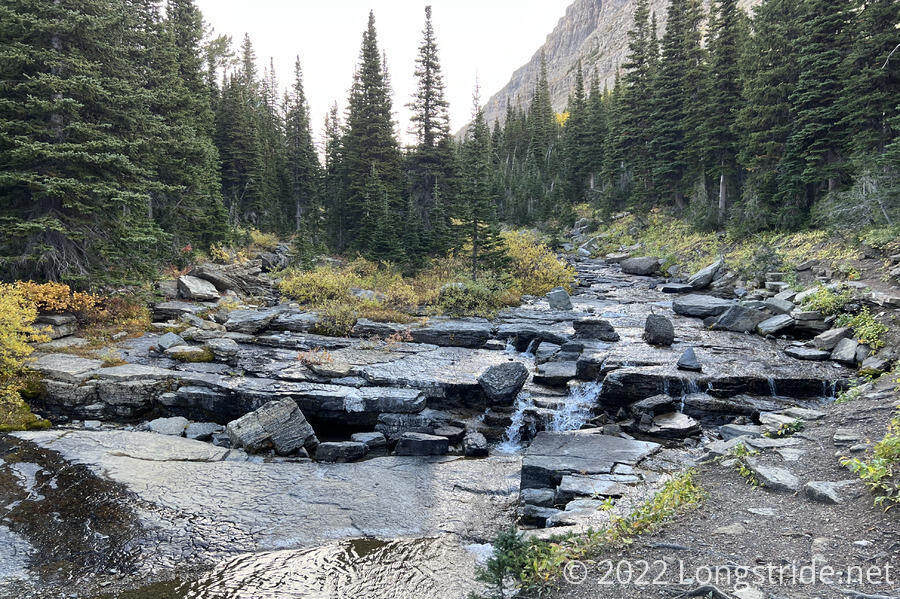 Continuing to climb, the forest gradually thinned as I gained elevation, and wound around the top of a glacial valley. The west side of the valley was bounded by Piegan Mountain, with its glacier readily visible. 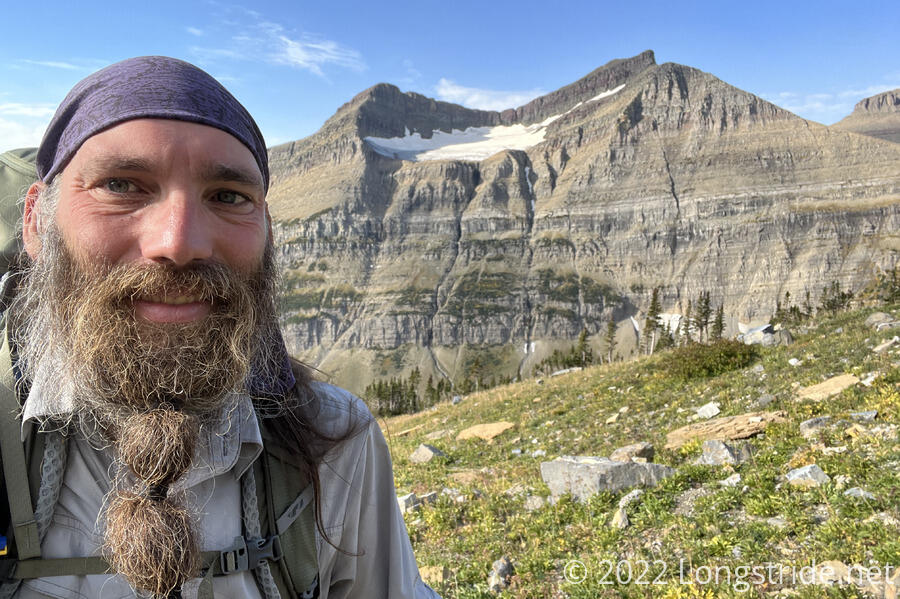 10 am Selfie Day 147 — Across the valley is Piegan Mountain and its glacier.

Circling around to the north side of the valley, the expansive view to the south just by itself would have made the day worth it. But the best was still yet to come.

After just shy of six miles, I reached Piegan Pass. The view south was now obscured due to the shape of the mountains, but the view to the north more than made up for that. A steep drop-off led down to a wide valley with steep mountains on both sides. It was a great spot to stop for a break.

Dropping down from the pass, small pockets of snow remained in the shadows, several of which formed bridges over small creeks running through them. The steep drop-off hid a waterfall, Morning Eagle Falls that only became visible once I’d descended 1500 feet from the pass. As I descended further on a series of switchbacks, I got closer to the waterfall, which flowed down a nearly-vertical sheet of rock exposed by the water. 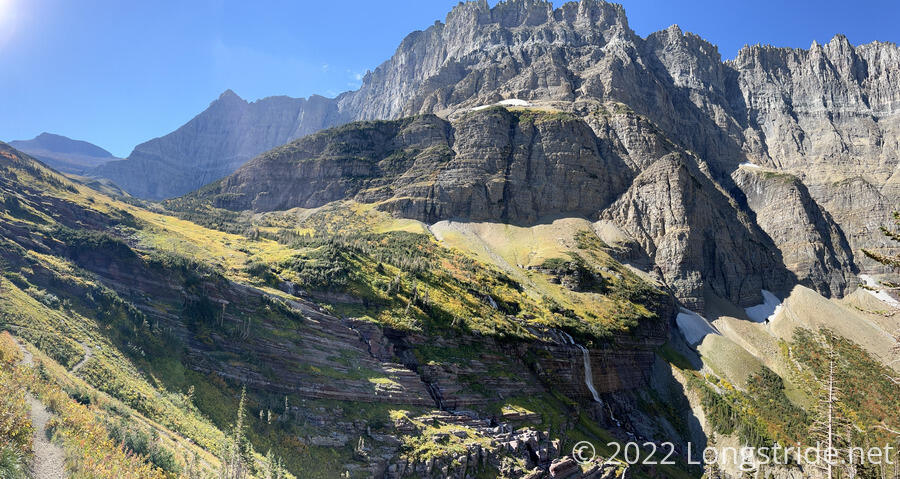 After several more switchbacks, I reached the valley floor, and followed Cataract Creek for a while, until the trail diverged a bit, to go wide of Lake Josephine, one of the lakes in the lower part of the valley.

I passed Big Gulp and Pretty Bird, whom I’d met the other day as I was hiking from Two Medicine to East Glacier Park. A bit ahead of me today, they saw a grizzly in the bowl below Piegan Pass. I also found out they were in the tent I saw last night at Reynolds. They’d left early this morning, a bit surprised to see eight people’s worth of food bags hanging from the bear pole. They passed me later, when I stopped for a second break.

As I continued down the valley, I passed a large group of tourists looking for a trail to Lake Josephine; they asked me, because I guess I looked like I knew where things were. Coincidentally, they were standing right on the trail intersection.

The trail turned into to a dirt road, when then led to the Many Glacier Lodge and Swiftcurrent Lake. The lodge was in the process of being winterized, with most of its doors and windows already boarded up. The season for Many Glacier over, everything around the lodge was closed; I’d hoped at least for there to be a snack shop or soda vending machine somewhere. The small boat dock on the lake had also been removed, leaving behind a few support poles. From the lake, though, I could see up both the glacial valleys for Grinnell and Swiftcurrent glaciers, though from this vantage point, both glaciers were hidden from view. 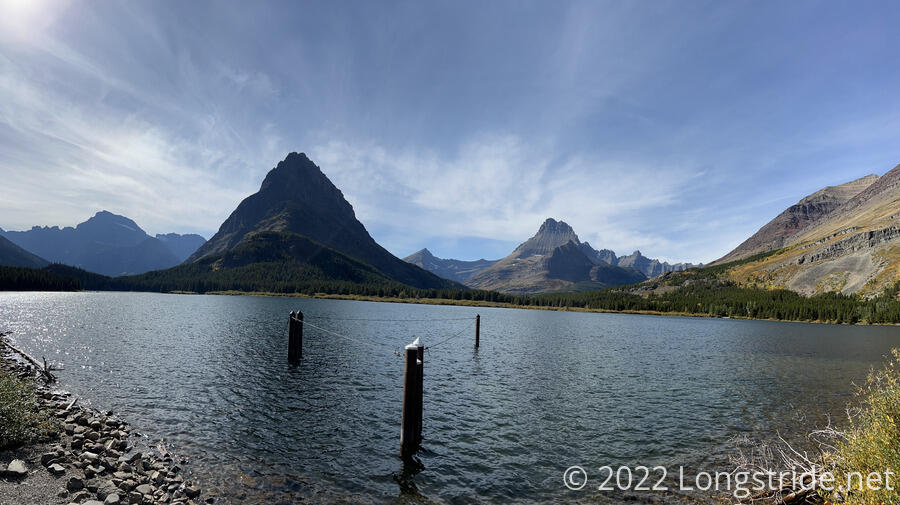 View from the (removed) dock at Many Glacier Lodge towards the Grinnell (left) and Swiftcurrent (right) glacial valleys.

I ran into Big Gulp and Pretty Bird again; they’d planned on camping at the Many Glacier campground, but with rain forecast for tomorrow, they wanted to push ahead on their route to Chief Mountain (an alternate northern terminus) through the Ptarmigan Tunnel, a tunnel bored through a solid rock wall to connect two valleys without requiring a very steep climb over the valleys’ natural wall.

I continued, looping around Swiftcurrent Lake, and taking a tiny detour through the Grinnell Glacier Trailhead, which had a working water faucet and a trash dumpster. Briefly joining the road that led through the Many Glacier Campground, the last roadwalk of Montana brought me to the Swiftcurrent Trailhead.

Leaving the trailhead, the trail took me along a wide dirt path with an incredibly gradual incline for the next four miles: so gradual, it really did almost seem flat. I passed a lot of day hikers, most (but not all) heading back towards the parking lot at the trailhead.

I stopped for a break just before the steep climb to Swiftcurrent Pass began. As the forest gradually thinned I got a good view of what I was hiking towards: a steep rock wall with a glacier near the top. 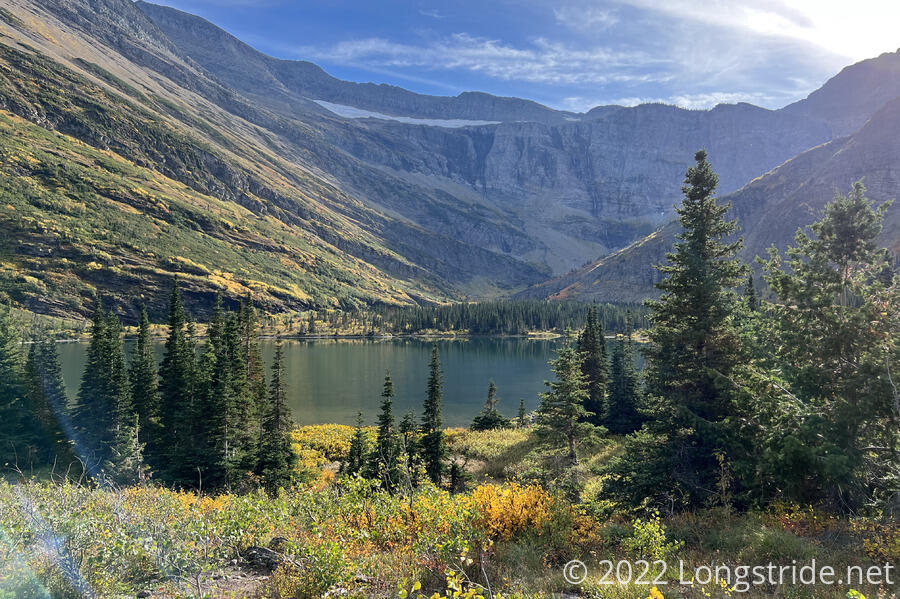 After crossing one of the creeks formed from meltwater from Swiftcurrent Glacier, the steep climb began in earnest. The mountainside erupted in fiery fall colors. 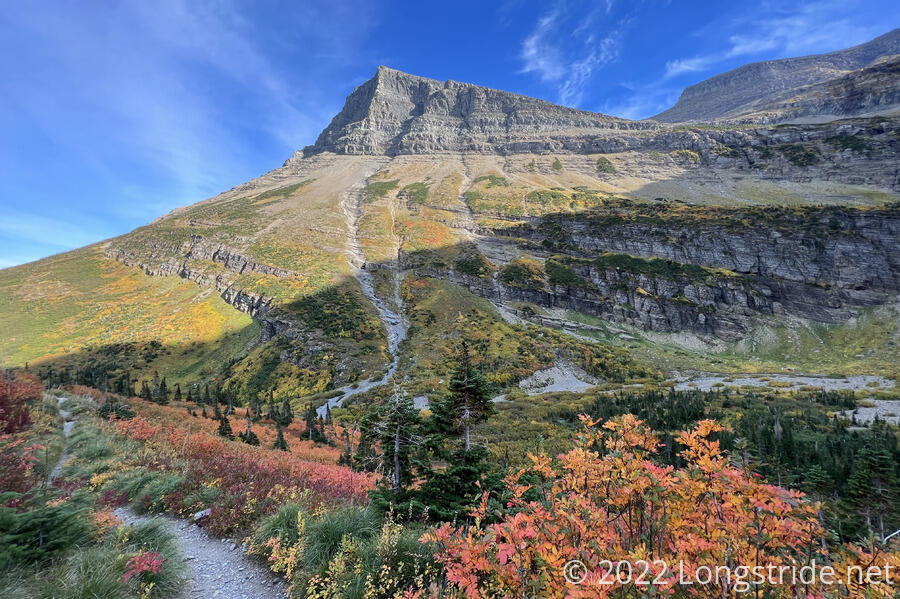 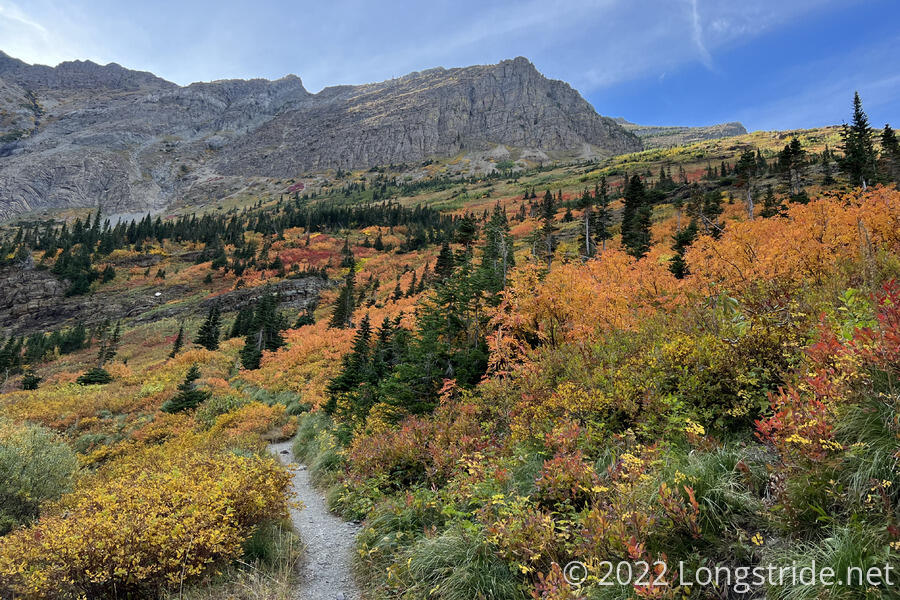 A steep set of switchbacks carried me up the side of Swiftcurrent Mountain, gradually providing better views of the thousand-foot-tall waterfalls flowing from Swiftcurrent Glacier down the valley’s headwall. 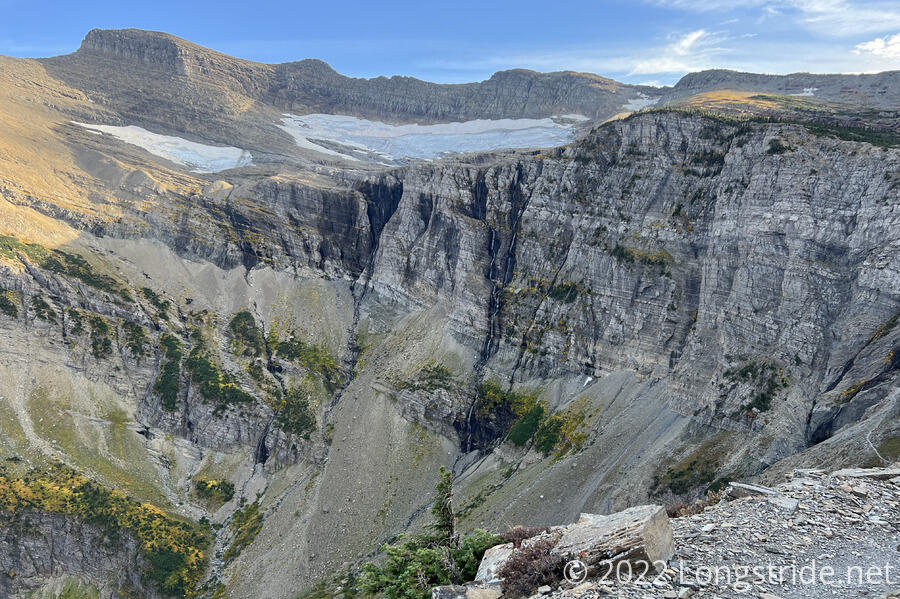 With the sun arcing behind Grinnell and Swiftcurrent Mountains, I was keenly aware of the fading daylight. Shadows crept down the valley, and the temperature dropped, as I was plunged into shade almost from the time I began the climb up to the pass.

With each passing turn of the switchbacks, the view out of the valley to the east gradually became more and more stunning. All the colors of the rainbow were represented in the mountains, foliage, and lakes. These were, I think, my favorite views of the day. 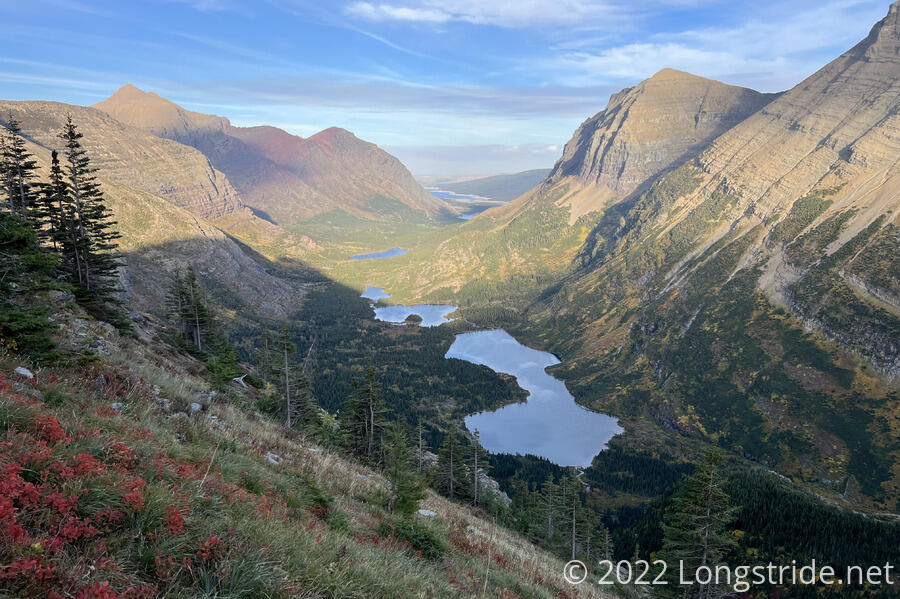 View northeast out of Swiftcurrent valley. Bullfrog Lake and several others in the valley are visibile, as is Swiftcurrent Lake and Lake Sherburne, in the distance.

Near the top of Swiftcurrent Pass, I briefly stepped into sunlight again, though that quickly disappeared as the sun dropped behind clouds. At the pass, a trail led up to a small lookout atop Swiftcurrent Mountain; a sign warned that “Leaving food unattended is a violation. Leaving packs is not advised. Violaters will be find.” Now after six, with sunset in just over an hour, I decided not to attempt to summit the mountain; it had already been a long enough day, and two and a half miles up and back would make it sunset by the time I returned to the pass.

From the pass, the trail meandered a bit, dropping down old, worn trails near the Granite Park Chalet. To the west, clouds approached form behind a line of mountains. Some of the clouds appeared to be bringing rain. I hurried down the trail, at least as much as I could given how worn it was.

The sun begins to set behind clouds west of Swiftcurrent Pass. Some of the clouds appear to be bringing rain.

My destination for the evening, the Granite Campground, was surprisingly far off-trail down another steep switchbacky trail. On the way down, I saw a bright orange tarp (which I thought was Fuck-It’s pack cover) near a platform with a bear box and picnic table — an incredible campsite, it seemed. I was disappointed to find that it was actually occupied by a caretaker, and that the actual campground was further downhill.

I reached the campground shortly before 7, just as Fuck-It, Sprouts, and Wild Man finished dinner and retreated to their tents. My only company for the evening was, briefly, two backpackers enjoying Glacier for a few days, and a deer that hovered around the food prep area of the campground, munching on the trees. I retired to my tent long after sunset. 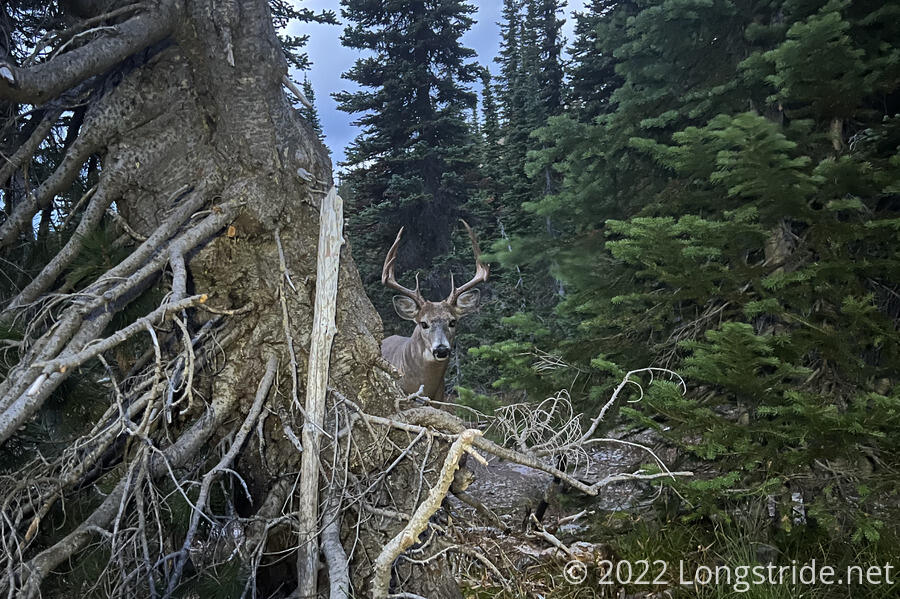 After 9, the wind picked up, and a little bit of rain fell, despite the weather forecast presently calling for no rain until tomorrow afternoon (and then rain through Saturday). So it seems like the last two days in Glacier will have less than stellar weather. Still, though, the end is almost near: less than 26 miles remain until the terminus.