A couple of light sprinkles of rain started off the morning, delaying my departure from Tillotson Camp slightly, but happily, that was the extent of the rain for the day. One by one, those of us at the shelter all set off for Jay Camp, located near the foot of Jay Mountain, for our penultimate day of hiking on the Long Trail. Before leaving, I noticed that, from the shelter, we could clearly see the fire tower atop Belvidere Mountain, a few miles distant.

While the trail crew was evidentially working on the section south of the shelter, hopefully they'll migrate to north of the shelter soon; there were a lot of downed trees on the trail between Tillotson Camp and the summit of Tillotson Mountain. Combined with copious amounts of mud, it made this morning's hike slow and arduous. At one point, when I had just caught up with Moe and Mugs, I stepped in a mud pit and went in up to my knee, which required a bit of work to get out. Moe gave me a hand by pointing out some places where I might be able to reach for leverage. And if ever there was a time I was glad I had boots, and not shoes, it was now: I'm certain that without boots, the mud pit would have attempted to steal my shoe.

I continued on to Haystack Mountain, next on the trail, passing Anne along the way. Needing to do something about the mud and water that had seeped into my boot, I took a short break to climb up to the summit to check out the view and wring my socks out. With a mostly overcast sky, actually drying out my boots was simply not going to happen, and the rest of the day's hike was all but guaranteed to be somewhat miserable for my feet, since at best, I could slowly "dry" my boots by continuing to wring water of out my socks as the day progressed. 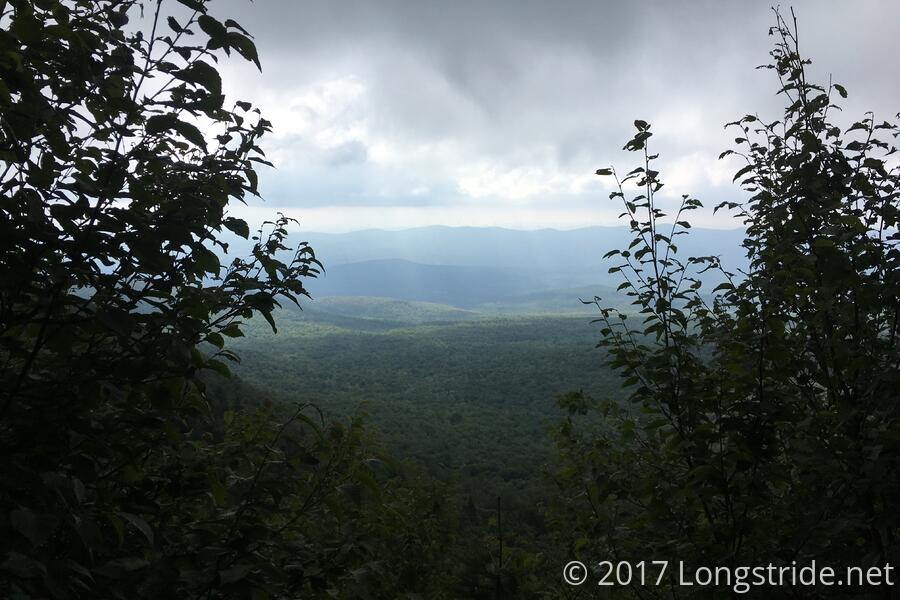 View from Haystack Mountain — The sun tries to cut through the clouds, sending some rays to the valley below.

The trail continued to be a fairly slow and frustrating mix of mud and wet rocks going down from Haystack to the next road crossing, so for the first time this hike, I put on some music. I don't know if it actually made me go faster, or it just helped pass the time more quickly, but it felt like it got me to the road a lot faster than without the music. At the last, it helped occupy my mind with something other than "the trail really sucks right now". At the VT 58 road crossing in Hazen's Notch, I again caught up with Moe and Mugs, and took a snack break. As they were leaving, Anne arrived. Across the road was the formidable looking Sugarloaf Mountain, with a steep cliff face visible. Fortunately, the Long Trail skirted around the mountain on its way to Hazen's Notch Camp, and didn't actually climb it. 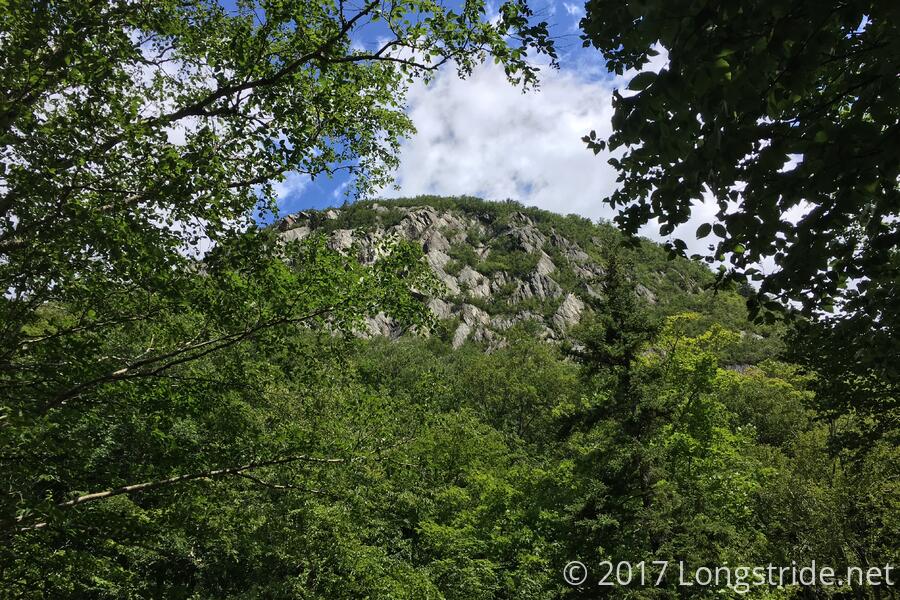 About a mile and a half from the road was Hazen's Notch Camp. While the shelter was only a tenth of a mile off-trail, I skipped visiting it, wanting to not do more hiking in wet boots and socks than necessary. I was heartened, though, to see a sign showing the distance to Canada: Only 17.5 miles to go!

A couple of small peaks later, the trail passed by "Chet's Lookout", a large rock adjacent to the trail with a rickety ladder ascending it. Unfortunately, this was yet another example of the Used-to-be-View; the trees had grown up sufficiently that there really wasn't a view at all.

Another mile or so after the not-lookout was "Domey's Dome", clearly named by the same committee that gave us "Boaty McBoatface", and the beginning of an amazingly poorly blazed stretch of trail. There were three trails exiting the summit: LT south (where I came from), and two other trails potentially going north. Neither were blazed. I guessed, based on the position of the southbound blaze (into which someone had etched "S" and an arrow), which of the two trails must have been north, but it was rather disconcerting to hike for well over a mile before seeing another blaze.

I pushed through the rest of the day to Jay Camp, passing by a hilariously tiny and dilapidated shelter just past the VT 242 road crossing; I presume the shelter is there to misdirect locals who know there's a shelter "near the road" and don't venture far enough down the trail to realize where the actual shelter is.

Conveniently, the water source for Jay Camp was a nicely flowing stream that ran about 100 feet in front of the shelter, so I was able to quickly get water and then get my boots off.

Getting to Jay Camp before everyone else in the loose group of the five of us planning on finishing tomorrow, I took the time to decide what to do. Ideally, I'd have liked to continue on to the ski warming hut at the summit of Jay Mountain, which would make peak-bagging Big Jay tomorrow much easier. But, with my feet looking like prunes, it was clear that going further today would be a bad idea.

Somehow, I got to the shelter nearly an hour before the next people to arrive, Moe and Mugs, which gave me ample time to change out of my hiking clothes and into camp clothes before someone else arrived. (It usually takes longer to find a private place to change clothes than to actually change.)

Sometime Never was next to arrive, followed by Apostle Paul, a southbounder who had started that day with his girlfriend (or wife; I couldn't tell and didn't ask), and whom had thru-hiked the Appalachian Trail in 2011. He reported that the trail was extremely rugged north of where we were, and that it took them ten hours to go twelve miles! This put my plan for Big Jay in doubt; if it was going to take ten hours to make it to the end of the trail, that wouldn't leave much time to spare for a side trip unless I left the shelter tomorrow very early.

Anne arrived last, and as everyone else tented, she and I shared the shelter, which made odd noises all evening, presumably from the shelter mice getting into trouble in unseen parts of the cabin. Hoping to be up early tomorrow, I turned in at 9, ready to take on the final stretch of the Long Trail.