It was cold overnight, with frost on the inside of my tent, so even though I woke up shortly after six, I was disinclined to get out of my sleeping bag for well over another hour, by which time the sun had come out and had started to defrost my tent. Happily, there was no notable wind last night, which was great since I had no rocks with which to hold down my tent. The plan for a short day today also did nothing to speed my exit.

I finally got out of my tent around 7:30, just as Rebo passed by on the trail. His destination, and ours, was the McDonald’s at Cajon Pass, about 6.5 miles ahead. 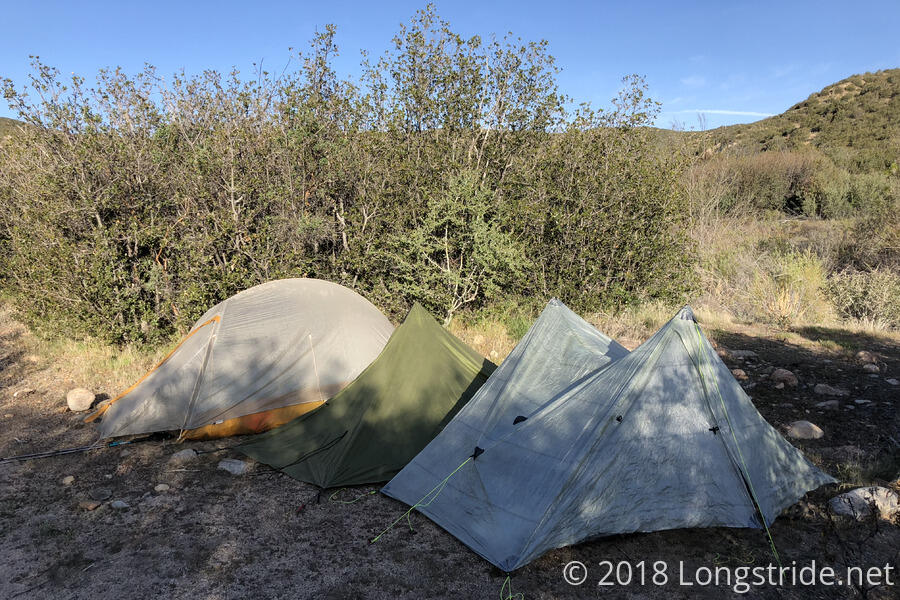 This tentsite “only” has space for one tent. I think we showed it wrong.

About 15 minutes before we left camp, a group of three hikers passed us on the trail. About ten minutes after that, we saw them pass by again, atop the mountain behind our campsite. We made some comments about how stupid it was that the trail had to go so far out of its way just to climb a hill, and Dylan decided he was going to bushwhack straight up. So we set ourselves up a little race: Quoi and I would take the trail (and with me in the lead, we were pretty much going as fast as we could), and we’d see whether we or Dylan made it up the hill faster.

About ten minutes later, Quoi and I arrived at the “top” (rather, the last place you could see our campsite before the trail turned around the backside of the hill), and Dylan was nowhere to be seen. We looked for him a bit, and then when I checked my GPS, I noticed that while we had walked nearly three-quarters of a mile to get there, it was only 500 feet away (plus about 100 feet of elevation gain). Dylan had probably made it there pretty quickly and had gone on, even though he was supposed to wait for us there. And then Quoi noticed his footprints on the ground, so after a ten or fifteen minute delay, we headed on.

Over the next three miles, the trail gradually climbed, and near the top of the climb, I caught up with Dylan (who was sitting at an overlook eating some leftover pizza another hiker decided they no longer wanted to carry). He said it had only took him about five minutes to get up the hill and to the trail from the campsite. After one last, but short, climb, the trail followed by a somewhat more steep descent over the next three miles into Cajon Pass, and winds gradually picked up, making for some slower hiking, as there was often not much land on either side of the trail before it dropped off quite quickly.

Cajon Pass — We start climbing the mountains in the distance tomorrow.

On the way up, the trail passed under some high-voltage power lines, and while I was going alongside one of the pylons, a distant train whistle sounded, which was a little spooky in its coincidence, and my first immediate thought was that an alarm had been set off somehow. 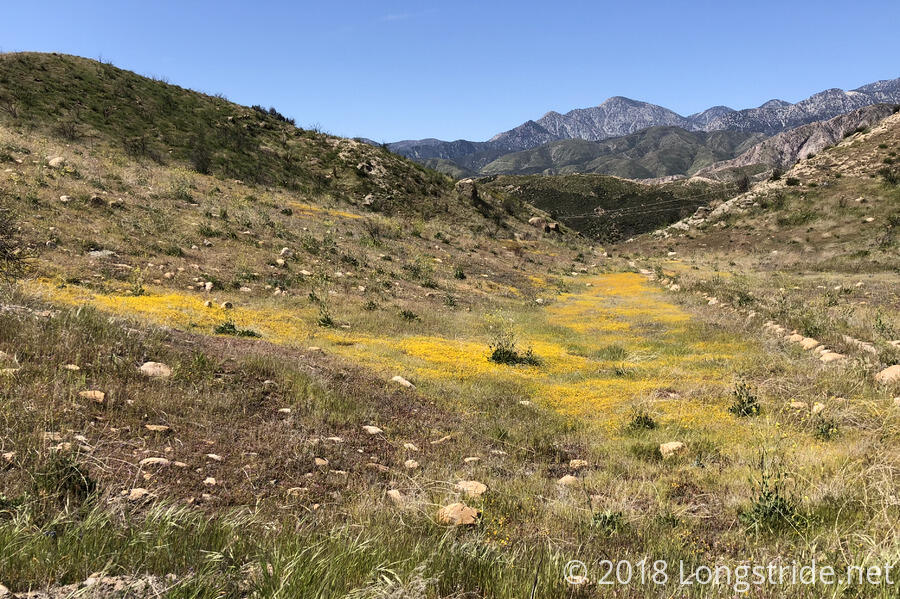 A Small Sea of Wildflowers

Reaching the trailhead at Cajon Pass, just before the trail passes under I-15, I took a half-mile roadwalk to the McDonalds near the exit from the interstate. It was a little after 11 am, and the McDonalds was quite busy with both hikers and non-hikers. Besides the staff at the counter, they also had a pair of touchscreen terminals that let you place an order without having to actually stand in line. It was a little clunky to use (and the screen was a title bit too tall, I thought), but once I figured out the interface, I got my order in (for a triple-cheeseburger with bacon, and fries) far faster than I would have just waiting in line, and one of the staff then delivered my food and drink to my table. Not having to wait in line is awesome.

Also at the McDonalds was Rebo, Sparky, Ghost Hiker, Trooper, Jay, Drags, Wile, and quite a few other hikers. Briefly, trail angel Mike Herrera made an appearance, with several bags of tortillas to give away. (Mike has a house in the desert which serves as a hiker oasis; chiefly, he has a water tank there that helps to soften what would otherwise be a long water carry.)

Quoi and I had rooms at the nearby Best Western for the evening, and with checkin at 3, we were in no hurry to leave McDonalds. We sat there, and ate, and talked, as hikers rotated through. Eventually, we made our way to the the motel, and got to check in around 4:30. Dylan had walked there with us, but after we checked in, he disappeared without a trace. Quoi and I assumed he had went back to the trailhead, or alternatively, left to arrange a ride up to Wrightwood (Quoi said this was a common section to skip last year).

On the way to the motel, we passed by a field of flowers. Quoi decided my beard needed decoration, and so picked a few flowers for the cause. 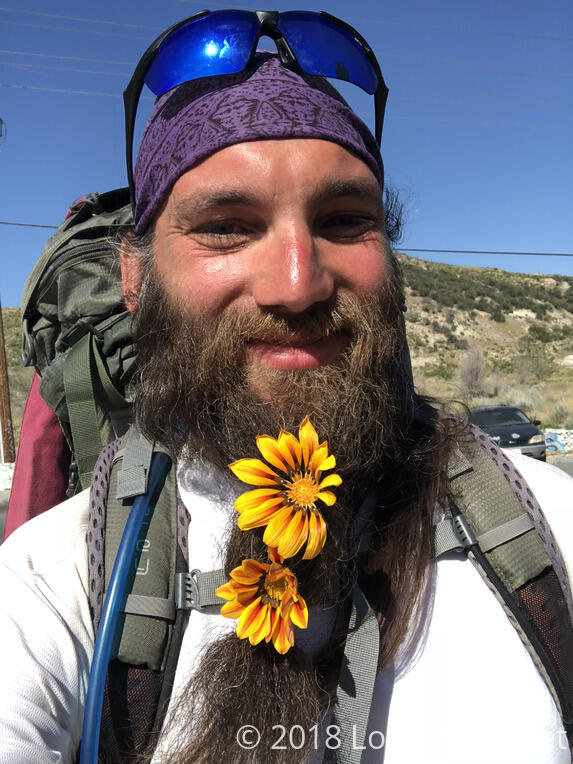 Happy Mountain Hippy — Quoi decorated my beard with flowers. Another friend described this as a “happy mountain hippy” look, and so here we are...

I had a relatively low-key evening afterwards. I grabbed a shower, followed by dinner at the Subway across the street from the motel. Quoi and I split doing laundry (to save on cost, time, and resources). The laundry at the Best Western was the least secure I’ve ever seen. Most motels have a washer and dryer inside a room somewhere. This one had their customer laundry machines outside, in a corner on the second floor: literally anyone could get into the laundry. (Though who would want to steal smelly hiker clothes is beyond me.)

Tomorrow: the start of a long climb up to Wrightwood.