Despite a casual and very late start, today was a pretty hard day, featuring a couple of really steep climbs with a pack fully loaded with food. But, I’ve now summited Mt. Baden-Powell, so I can check that off my to-do list.

Quoi and I were not especially speedy this morning, but once we were ready to go, Mike gave us a ride into town to grab breakfast at a bakery (cinnamon rolls, yum!), and then on to the trailhead. Mike and Sue, thanks so much for your hospitality yesterday and today!

By the time we finished our cinnamon rolls, Dylan had arrived at the trailhead, confirming our suspicion that he had hitched into Wrightwood and spent two days hanging around town. We finally got started hiking around 9:45, the latest I think I’ve gotten started so far this hike.

The day started with an uphill and a steep downhill to a second crossing of CA 2 at Vincent Gap, where I met a trail maintainer with a horse and pack mule, confirming my suspicion that the trail maintainers on the PCT use pack animals to help with maintenance.

Being the weekend, with relatively good weather, the parking lot at the trailhead was filled to capacity. I sat down at one of the picnic tables and ate a snack in preparation for the long, steep climb up Mt. Baden-Powell — 2800 feet over four miles. Baden-Powell, named after the founder of Boy Scouting, is the fourth highest peak in the San Gabriel mountains, at 9406 ft.

While I was waiting, Sparky and his group arrived, as did Tater, who was able to get his pack from the hardware store right before the last employee left last night. They left for the summit while I was preparing to leave, and just as Quoi and Dylan made it there. I chatted with them for a short while, but with a long climb ahead, and still further hiking to get water and camp, I pressed on while they took their break.

While there was some shade from the pine trees on the mountain, it was a grueling hike up to the summit. I made a fast start, but after perhaps a mile, I started slowing down considerably. From the trailhead this morning, it had appeared that Baden-Powell had no snow, however I suspected that there might still be snow on the north side of the mountain. There was, and the trail went through a few places where the snow was at least a foot deep.

As usual, the PCT itself does not summit mountains; instead, a short spur trail headed to the summit from the PCT. At the intersection stood a gnarled old pine tree, estimated to be 1,500 years old. 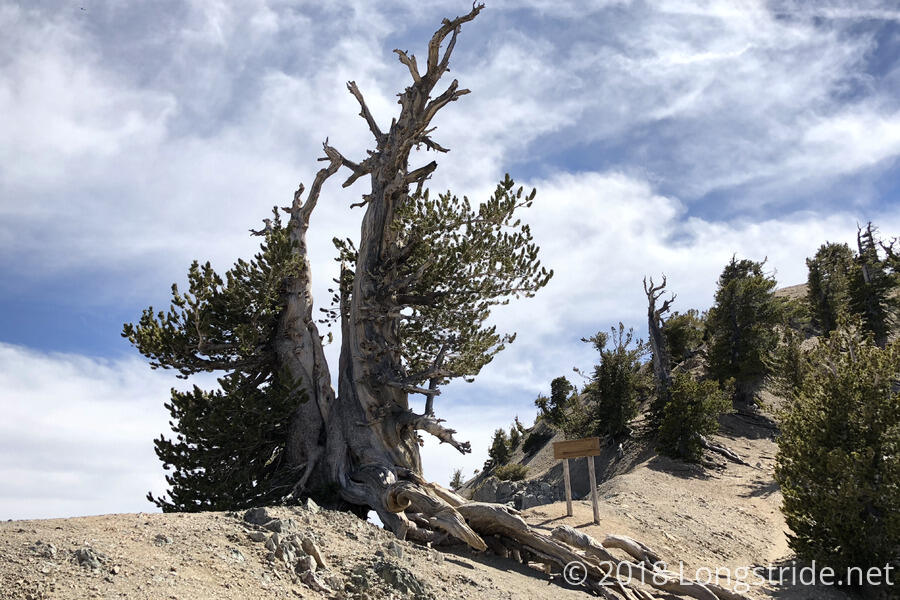 There were no shortage of views going up, and the summit itself had a magnificent view of the desert to the north, and mountainous forests to the south.

While I had originally intended to wait for Quoi and Dylan at the summit, it was later in the day than I liked, and I still had six more miles to hike before I got to the Little Jimmy Campground and its spring. Stopping early wasn’t an option tonight: I wanted dinner, and needed water to cook it.

Along the way, there were occasional views to the south, which featured small portions of the Los Angeles skyline, just barely visible through fog over the city.

The last couple of miles to the Little Jimmy campground were fairly steep, and the spur trail to the Little Jimmy Spring even steeper, but I finally made it to water, and it was flowing at a great pace out of a pipe stuck into the hill. Not long after I got there and had started filtering water, it seemed like everyone showed up all at once: Sparky and his group, Tater, some other hikers, and half a dozen kids (I’m assuming Boy Scouts) from the campground.

This reminded me that it was still the weekend, and there was a high probability the campground would be in heavy use. Fortunately, us thru-hikers are a hardy lot, and don’t need that much space to pitch a tent. We can get a tent anywhere there is flat ground and sufficient space.

Once I got to the campground, it was pretty clear there was a lot going on: there were a lot of tents set up from various different groups in three distinct camping areas. And there was a fair amount of noise from the kids. Sparky, nonplussed with the noise, threatened to be the one who would loudly and unpleasantly tell them to shut up if they were too loud while he was trying to sleep. He then went off with Ghost Hiker to scout out other areas. I started to set my tent up; Trooper looked incredibly indecisive; some other thru-hikers started setting up their tents, or sat on the ground relaxing.

Sparky came back with good news: Ghost Hiker had found a somewhat secluded site down the hill a bit from the trail, large enough for their group and me, so I quickly tore down my half-constructed tent and went off with them, and set my tent up again on a nice, soft bed of pine needles.

But, a sign at Little Jimmy warned that we were in “Bear Country”, which necessitated doing what I had so far this hike had been able to avoid doing: a proper bear hang. Doing this reminded me that this was my absolute least favorite activity in camping. First, a proper tree needs to be located. Sparky was nice enough to find one for me, as I was untangling my rope that had spent the last month untouched at the bottom of a pocket on my pack. Then a rock, not too big, and not too small, must be procured, the rope tied around it, and the rock thrown over a suitable branch. I took what should have been an easy throw (and probably would have been if the last time I did this wasn’t a year and a half ago) and turned it into a half-hour ordeal.

The first throw went well, except the rope wasn’t tied well enough to the rock, and the rock fell out, leaving the rope dangling 15 feet in the air. Recalling the rope meant untangling it again, as it wound around itself and branches and small plants on the ground. With a second rock located and tied, the throw flat out missed. A third throw was too low as well, and lost the rock. Another detangling later, I found a short thick branch to use instead of a rock, and that throw bounced off the branch I was aiming for and flew into another tree, and that took several minutes to extricate the rope from.

By the time I finally got a good throw, the sun had set, and it was cold, and I was in no mood to cook all of my dinner; I settled for just Macaroni and Cheese tonight, and turned into my sleeping bag really quite tired.