My extremely busy zero day, involving two shuttles into to town, three restaurants, a trip to REI, a food resupply, and a trip to a movie theater, started off somewhat relaxed, with a ride into Agua Dulce for breakfast.

The restaurant Home Made was recommended to us as the best place to get breakfast in town, so, that’s where at least eight of us went. A promised, breakfast (French toast for me) was fantastic, and we got finished just as the next run of the shuttle arrived, to take us back to Hiker Heaven.

Sparky, Ghost Hiker, Trooper, Alias (Jay), and I got a Lyft to the nearest REI, about an hour away. I badly needed new trekking poles — the tips on my old ones had practically disintegrated over the last week or so. (I was really not impressed; my REI poles on my AT thru-hike lasted more than twice as long before sustaining a similar level of damage.) I also needed a new set of pole tip covers, since I had lost one of them before I even started on the trail. I needed a new sack to put my tent in, and I wanted to replace my shoes, since they were clearly no longer comfortable to hike in. Rather than just getting the same poles (the REI store brand), I wound up with, at a salesperson’s suggestion, a pair of Leki CorkLite Trekking Poles. They’re a little heavier, but the tips are replaceable, so if they wear out, I’ll be able to replace just the tips, rather than having to get entirely new poles. 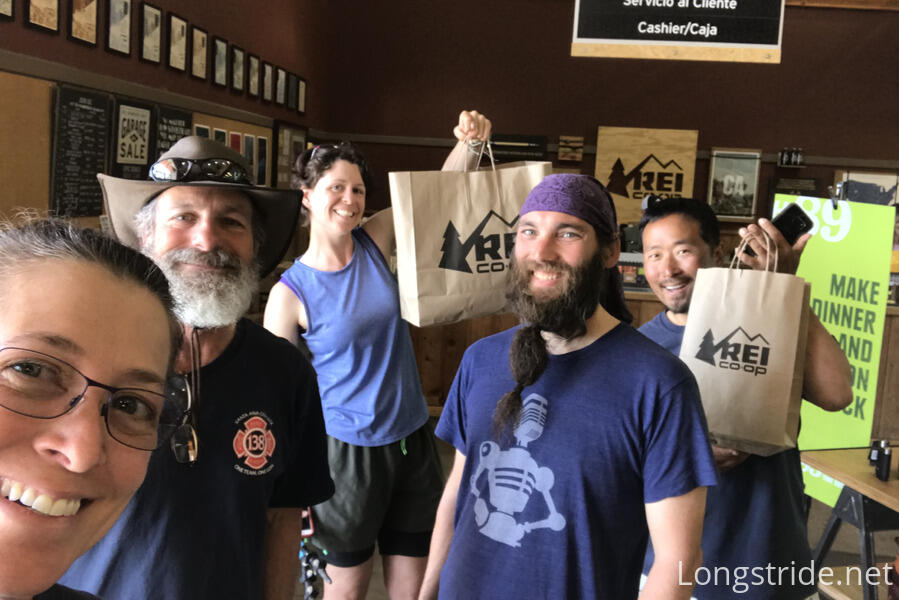 On the way to REI, I suggested to Sparky and Trooper that we could see the new Avengers: Infinity War movie, out today, at a theater about 20 minutes from Hiker Heaven. They tentatively agreed, but after we got back, they decided that they’d rather see it at the theater in Tehachapi, which would be less logistically complex (but also a less good theatre). I didn’t really want to wait a week to see the movie, though, so for the rest of the afternoon, I tried to find, to no avail, other people who it took be interested in splitting the Lyft fare to go see the movie tonight.

By the time I got back, Quoi and Dylan had arrived, and Quoi was awaiting the arrival of her boyfriend, who would get there later in the evening.

After repacking my food, I caught a shuttle back into town, for dinner at the Mexican restaurant, Maria Bonita. There, I finally managed to find one other person, Shy Guy, who also wanted to see the movie tonight. Split two ways, the fare for getting to the theatre and back was still a bit expensive (it wound up being more than the movie ticket itself), but it wasn’t too bad, and it was a small price to pay for seeing the movie on opening night while on the trail.

All things considered, this was probably my most busy zero day ever, and all the running around made it not feel like a zero at all, since there was almost no relaxing. At least, the plan is for the next few days to not be terribly strenuous, so that should help make up for it.

This post contains links to amazon.com. As an Amazon Associate, I earn from qualifying purchases.
Pacific Crest Trail, 2018
« (Day 36: Feet On Fire) Previous Entry
Next Entry (Day 38: It’s Hard To Be Efficient When You’re Talking To People) »