The first shuttle of the day into Agua Dulce was at 7. In theory, if I was efficient about it, I could have packed everything up before then, gone into town for breakfast, and then hiked out from there no later than 8:30. I might have actually been ready by then, except I saw Hulkspiration while I was packing, and then spent a good half hour talking with him instead of finishing.

Hulkspiration had arrived yesterday while I was out watching Infinity War; he had hitched in because his feet were too tender to hike on. It turned out that the shoes he had must have been meant for much softer ground, as they only had half of a sole. His wife, Lite Brite (Sierra), would be hiking in later.

Also arriving last night was Fuzzy Balls, Quoi’s boyfriend. They met on the PCT last year. Quoi had to abandon her thru-hike attempt after her passport (and other items) were stolen while she went off-trail to a wedding with Fuzzy Balls; he quit out of solidarity. She’s attempting a thru-hike again this year; he is planning to continue from where he left off when Quoi gets there.

We, and others, piled into the 7 am shuttle, and many of us went to Hand Made for breakfast. (The French toast I had yesterday was so good, I got it again.)

Back at Hiker Heaven, I ran into Patch, who also got in last night. I chatted with him for a bit while I finished taking down my tent, getting my packing done just in time to catch the 10 am shuttle to the trail, making this one of my latest starts so far.

The next place I’m heading to is Casa de Luna, about 24 miles up the trail (and 2 off-trail). Had I gotten the 7 am shuttle, I might have had a chance of getting there in one day, but I didn’t want to push that far in one day yet unless I absolutely had to. Splitting it up into two 12-mile days makes for happier feet and less time pressure.

From Agua Dulce, the trail continued along the town’s main street (mostly on a simple trail adjacent to the road) for two miles, before starting a steep climb into the mountains north of the town. The late start didn’t help the climb either: most of my ascent happened when the sun was highest overhead. Once past the town, though, the hills were surprisingly green. Late in the day, the Bouquet Reservoir came into view. 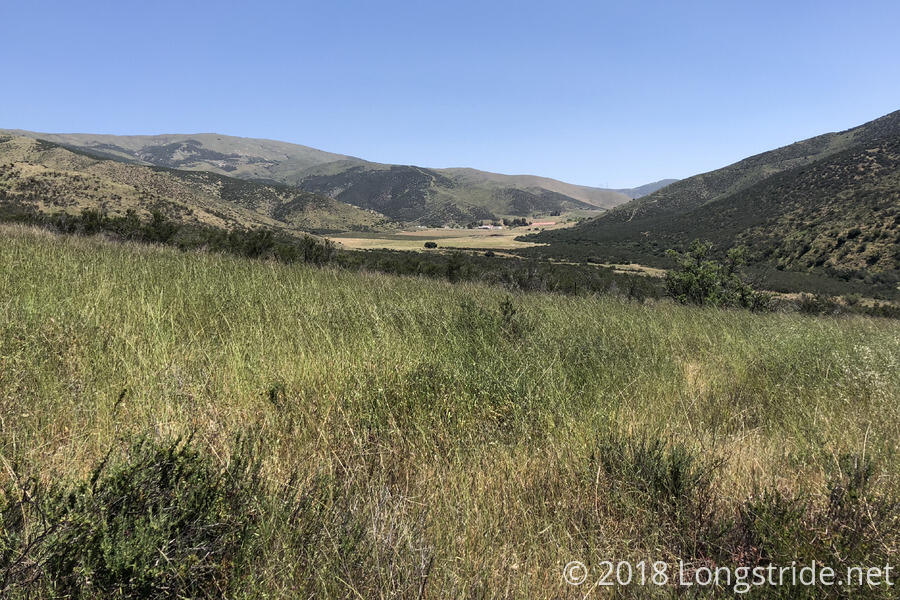 The only reliable water source for the day, about nine miles in, was a small piped spring. The water was flowing fairly well, so there was no issue there. The complicating factor was that there was a bee nest somewhere nearby, and so the area around the spring had bees flying around, and there were hundreds of bees on the ground where the spring drained to drinking and collecting water.

Me and three other hikers were there at the same time. We didn’t want to have to deal with the bees, but the water cache at the next road crossing was apparently low or unreliable, and we couldn’t get a signal to check, so, bee water it was. I put on the legs to my pants and, for the first time in over 2900 miles of hiking, put my bug net over my head. The precautions turned out to be unnecessary; J Dub was willing to sit by the pipe (where the bees weren’t too active), fill up everyone’s water bags or bottles, and hand them off when full, so the rest of us didn’t have to get too close to the bees or cross their path more often than necessary. 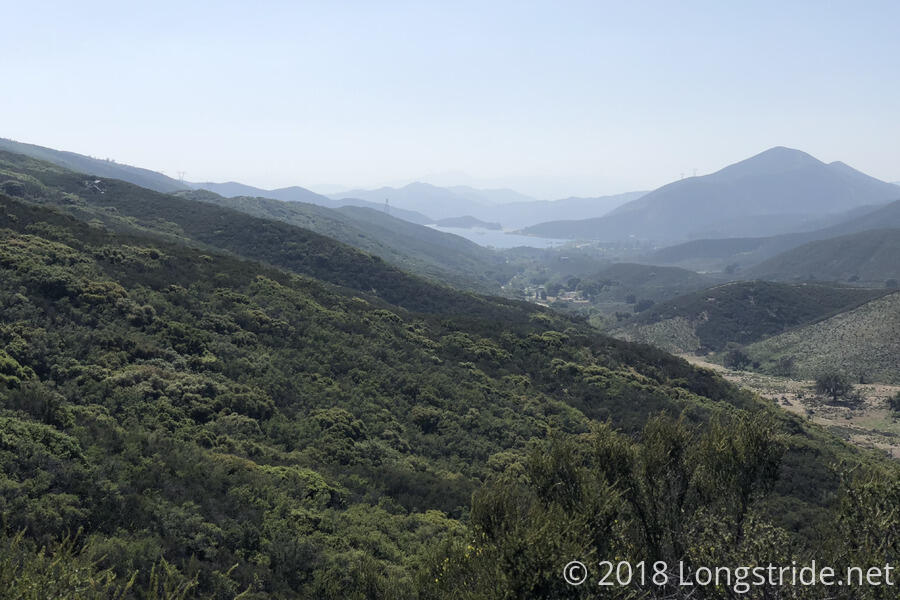 The water cache at the campsite just past the road, it turned out, was reasonably well-stocked. I had planned on camping there today, however, the road was somewhat active, and the location of the campsite didn’t do much to quiet the noise from the road. So I decided to continue on to the next campsite, about three-tenths of a mile down the trail, and a little uphill.

There were a few campsites near there, but the one I selected was slightly off-trail. A (very) short side-trail opened up into a campsite which could fit two tents, with a third tentsite hidden behind where I put my tent.

After dinner, the sun still up, I tried to catch up on bog posts, but being up late two nights in a row left me tired, and I briefly fell asleep (in an extremely uncomfortable position) in the process.

Tomorrow: hopefully get going early, and make it to Casa de Luna early in the day.