With Casa de Luna only 12.3 trail miles away (and another two miles of roadwalk), I wanted to get going relatively early so I could spend more time relaxing. I was actually successful at that goal, getting up early enough to be hiking shortly after 7.

As I was leaving, I ran into Alias; his group had tented at the tentsites right before mine, and we just weren’t aware of each other.

I took my break for the day at a conveniently located bench, dedicated to Bob Kimmerly. Next to the bench was a scoreboard with race records for the Leona Divide 50 from 1992 through 2010. The race, Kimmerly’s brainchild, is an ultra-marathon, a portion of which follows the PCT. (It was unclear to me, though, why the board hadn’t been updated in eight years, even though the race continues to be held.)

Later, I caught up with Ghost Hiker, who was blocking the trail. Sparky had gone ahead to do his business, and there wasn’t much of anything on the side of the trail nearby to hide in. We waited for Sparky’s signal for several minutes, as a traffic jam formed. Hearing no signal, we eventually decided that he must have finished. I went ahead first, and eventually caught up with Sparky when he stopped on the side of the trail to eat an emergency snack. Sparky confirmed he called back several times indicating the all-clear, though we didn’t hear. Just for shits and giggles, I yelled back “Found him! All-clear! The facilities are no longer in use!”. (Later, I confirmed that, not surprisingly, no one else had heard me either.)

Today represented a first for me on this trail: 12 miles before 12 noon. I only just barely managed that, but, an accomplishment nonetheless. That makes the next mileage goal 10 before 10. A few minutes later, I made it to San Francisquito Valley Road, bringing today’s hike to an end. Now, I just needed to get to Casa de Luna, which was two miles away via roads.

I tried hitching a ride into town, but it quickly became clear that no one was interested in stopping to pick me up, though that was probably because of the high speed limit and no place to safely pull over. Fortunately for me, the shuttle from Casa de Luna to the trailhead passed me, and one of the hikers in the car recognized me, so when the driver, Loner, was on his way back, he stopped to pick me up, which saved me a fair amount of walking. On the way to Casa de Luna, we stopped at a convenience store, and I picked up a frozen sandwich for lunch, as well as a soda and some beef jerky.

Casa de Luna is the residence of the Joe and Terrie Anderson, who have been hosting hikers at their home for 19 years. As such, like Hiker Heaven, it’s a prominent feature on the trail, and many hikers stop there. A set of couches and chairs out front provides lounge space for hikers, and a “Magical” Manzanita Forest behind the house, decorated with stones painted by past hikers, provides tentsites for hikers spending the night. Above the garage door is a row of PCT-themed bandanas, one for each year the Andersons have been giving them away. Below is a “Hippie Daycare” sign, and a giant sheet hung in front of the garage door, which hikers can autograph. A set of Santa and Mrs. Claus dolls in red polka-dot pajamas danced on a table next to the outdoor stove and oven, so out-of-season it was slightly creepy. 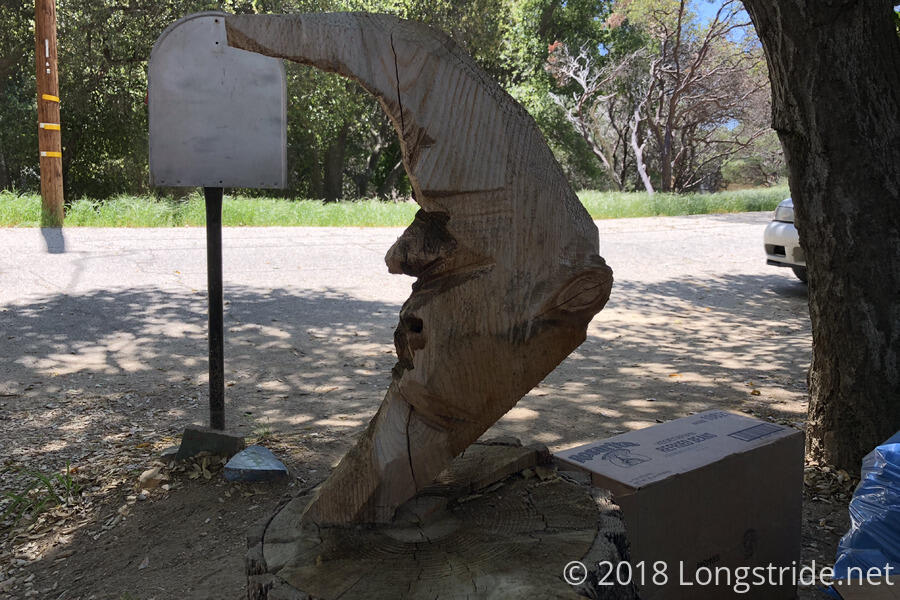 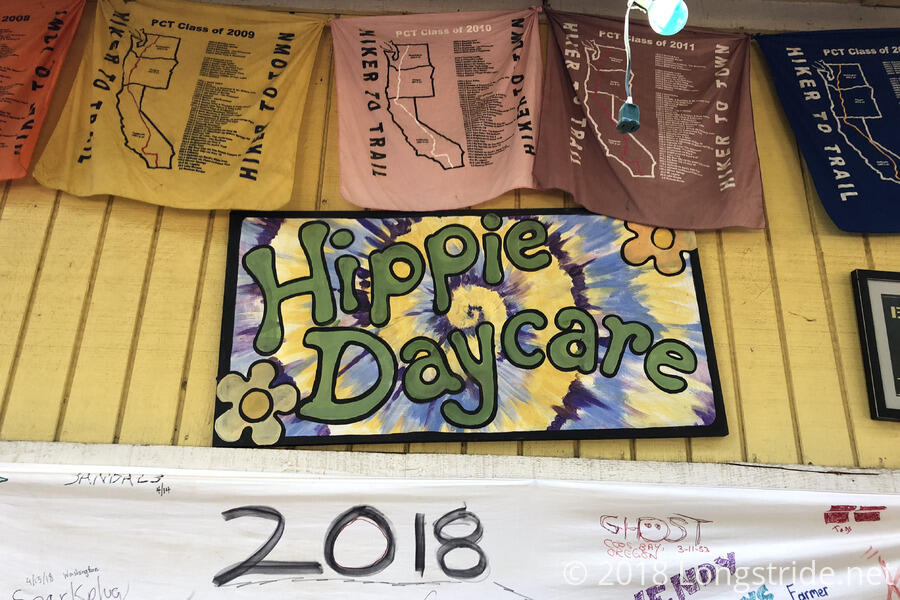 The first order of business was to select a Hawaiian shirt from the rack near the dancing Santa dolls and the charging table. (It’s requested that everyone wear a Hawaiian shirt. Because, why not?) After that, I set my tent up in the first available space. Once done, I walked back to the convenience store with Ninja Fabric (from Germany), Satyr, and Gigglish (from Montreal) for ice cream. Ninja Fabric, Satyr, and I split a quart and a half of Neapolitan, while Gigglish got a milkshake from the small restaurant across the street. Gigglish, I learned, also hiked the Long Trail last year, starting a week before I did.

Back at Casa de Luna, I continued to hang out on a comfy chair, drinking a 1 liter bottle of Dr Pepper, and chatting with the other hikers there. Quoi and Fuzzy Balls arrived shortly before dinner (having left Hiker Heaven around 5:30 am).

The Andersons generously provide diner for hikers: taco salad. It’s a simple dinner, but it was tasty and filling. After dinner, there were two rituals to be followed. The first, a group photo of everyone, with smiles (and other reactions) elicited by Terrie mooning the crowd (and thus, confirming Casa de Luna’s namesake). The second, hikers perform a short dance to receive a PCT bandanna (updated each year). I did my short dance and got my bandana, and as night fell, eventually retreated to my tent to sleep.