The wind overnight sounded like it was blowing pretty hard, but thanks to my campsite selection, there wasn’t much in the way of wind blowing against my tent. It was still a little cold, though, and I wound up sleeping in until almost 7:30.

An hour later, I was on the trail, hiking through a trail surrounded by trees. There were some gaps in the tree cover, but it was still nicely shaded. And it was still relatively cool in the morning, so it made for a nice way to start the day. 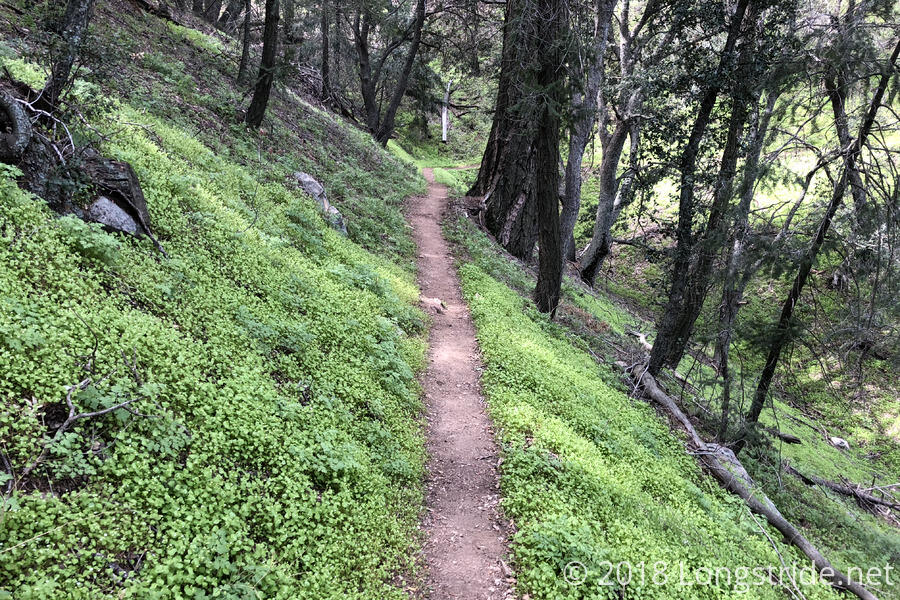 After a few miles, I reached a road crossing that had a water cache — a large blue barrel of water that was about 1/6 full. I took advantage of the unexpected cache (which the water report suggested was possibly empty and/or unreliable) to chug a liter of water and refill my water bottle from what I drank last night.

The trail passed an important milestone today: 500 miles. So important, of course, that there were three different 500 mile markers written with stones on the side of the trail, each about a tenth of a mile from each other. A little under two miles past the actual 500 mile mark, a post marked an old 500 mile location. 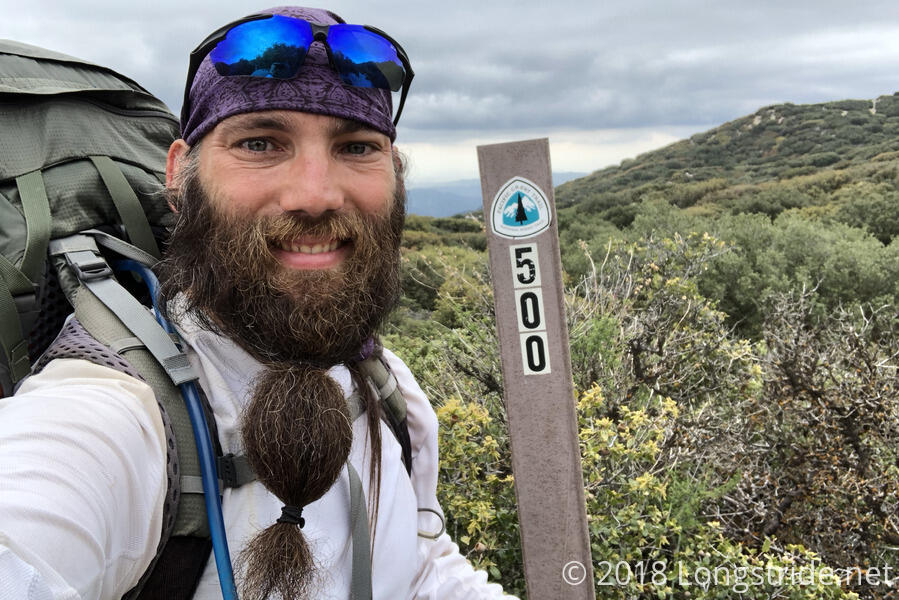 The afternoon was mostly cloudy, which made for a cooler hike than it might otherwise have been. In particular, as the afternoon progressed, clouds started to form over the mountain ridge to the north, past the desert. Lancaster, CA, which houses Hikertown could be clearly seen, as the trail continued to head west. Tomorrow, the trail will swing back east, before going north past the town and towards the mountains. 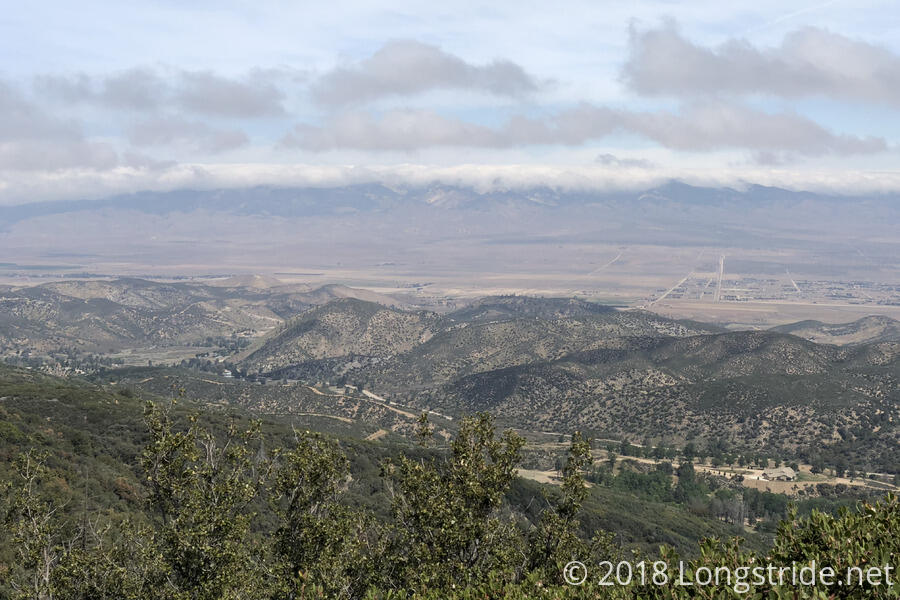 The Coming Desert — Clouds rolls over the Techachapi Mountains. The town of Neenach is visible to the right, with the trail following the road going straight towards the mountains — part of the LA Aqueduct.

For about a mile or two, the trail went through an area where there was fairly extensive treecutting work. Huge swaths of trees — which looked like they were already dead or dying when they were cut — had been significantly trimmed or cut down.

A barren section of forest where lots of trees had been removed.

Up until about a mile or two from my destination today, I didn’t see anyone else all day. While I expected at some point to go a day without seeing anyone, based on what I’d read about the PCT, I actually thought it would have already occurred.

I arrived at the Horse Trail Camp around 3:45, a little early to stop, but there was only one campsite between there and Hikertown, and going further would make today a pretty long hike. Finding a campsite today was a bit frustrating, but I was able to find a suitable place to put my tent after a bit of searching. There were a lot of fallen trees (whether this was related to the tree cutting earlier, I couldn’t tell), and the campsite was in general a big mess. If the trees get cleared away, though, there’d probably actually be quite a few nice tentsites. At least the camp’s picnic table seemed unscathed from whatever fell all the trees.

The camp has a piped spring, located down a fairly steep side trail. Part of the trail was very eroded, so it was a quite slippery adventure getting to the stream bed. I got there to find that the pipe had fallen apart, and I had to trek upstream a bit (around branches that were blocking the stream bed, which meant climbing up and around the bank, which itself was steep and easily eroded) before I got to a place where the pipe was actually connected to the spring. Happily, water was flowing pretty quickly out of the pipe, so it didn’t take much effort to collect water once I got to it. Hoping to make it easier for future hikers, I tried to reconnect the two disconnected segments of pipe, but they had moved too far away from each other, and I couldn’t connect them.

Once back at the camp, I noticed clouds had started to cover the mountain behind me. I cooked my dinner while keeping an eye on the clouds; they mostly seemed to roil and bubble about the ridge, occasionally dipping down a little, but still staying well above the camp. The weather forecast seems to indicate it’ll likely be cooler, with 100% humidity overnight, so it might not be terribly awesome when I wake up.

Tomorrow: a short day into Hikertown.