Since I was expecting a relatively short day, I took my time getting up. The cloud that parked itself on top of the mountain had not moved all night, but it still felt vaguely ominous, and the clouds on the mountains across the valley had not budged either, so once I got going, I wanted to get into Hikertown sooner, rather than later. 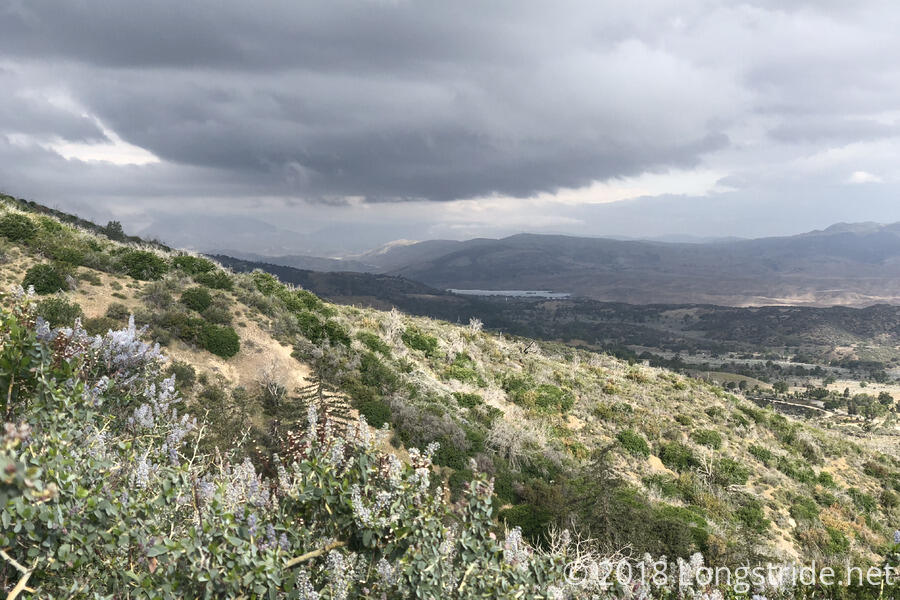 From Horse Trail Camp, the trail was downhill pretty much the entire 9.5 miles into Hikertown, with the exception of some of the mountain foothills that needed to be climbed to get around them. The trail tread was pretty nice, and I made a good pace down the mountain. Then, after about three miles, I suddenly realized that I couldn’t remember putting my tent stakes into my pack. And after confirming that my stakes bag wasn’t in my pack, I did what I hate doing: hiking backwards on the trail.

About a mile back, at a road crossing, I ran into some trail magic that wasn’t there when I passed by the first time. “Cruise Control”, the mother of hiker Cruise, was waiting at the trailhead with orange sodas, apples, beer, chips, and salsa. I quickly drank a soda and ate an apple, and then continued my charge up the mountain. Before I left, she suggested that a storm was blowing in, and would likely hit around noon. 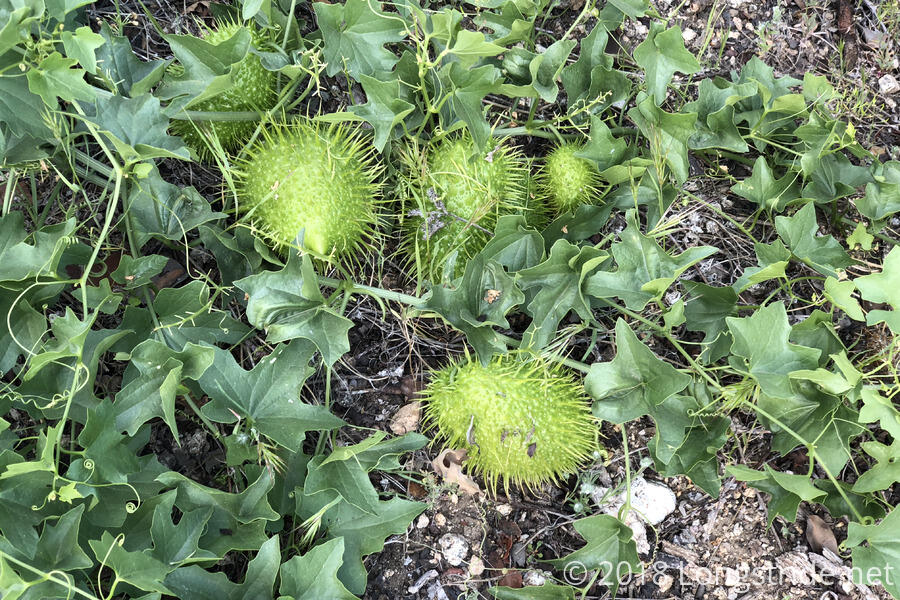 Wild Cucumber — There were plenty of wild cucumbers along the trail.

About three quarters of a mile from my campsite, I dropped my pack on the side of the trail. I could have dropped it at pretty much any point on the return hike, but I didn’t want to leave it unattended for too long. I wasn’t terribly worried about other hikers, but there were still animals around, and the longer my pack set unattended, the more likely an animal would get in. I found a nice pack-sized opening in the brush on the side of the trail, and left my pack there, not really taking any steps to try and hide it. Packless, I finished the climb up the mountain much faster, and retrieved my tent stake bag from the campsite: it was lying on the ground right next to where my pack had been.

The return hike to my pack started off pretty quickly. Free from the pack, and supported by a nice trail tread and downhill, I literally ran down the mountain at something like 6 mph. It was actually kind of fun, and I easily lost track of distance, and because my pack was apparently better hidden than I intended it to be, I didn’t see it and overshot it by almost half a mile. So, back up the mountain I went, eventually finding my pack. Then, back down the mountain I went.

Leaving the Angeles National Forest, the trail entered private land. A sign warned to stay on the trail: the PCT was adjacent to a hunting club, with hunting (and shooting) activity possible for eight hours a day. Conveniently, hunting season ended yesterday, so at least I didn’t have to worry about that!

I took a break just past where I made it before, shortly before noon, ten miles into a ten mile hike with six still to go. As I was finishing up my snack, a few droplets of rain fell on me, and the clouds atop the mountain I started from had clearly started to descend.

I kept going, trying to pick up the pace a bit to avoid getting rained on. The trail was a bit discouraging in that regard: it took a rather circuitous route, winding around the foothills, and occasionally sending me on a path directly towards the oncoming storm.

Eventually, I reached Hikertown, just off the trail where it passes California Highway 138. Hikertown is a pretty unique place on the trail. Consisting of a private residence, a garage (“bunk room”) where hikers can hang out, a large central courtyard where hikers can set up tents, and a dozen small buildings available for private lodging for a small donation, it is a nice hiker oasis between Casa de Luna and Tehachapi. The buildings are styled as if from a town in a Western.

After grabbing the last available private room (with a squeaky and ever-so-springy bed), the first order of business was food. I hiked far longer than I planned, and I was hungry. Conveniently, there is an hourly shuttle to the Neenach Cafe, a few miles down the road, which serves food. The food, I thought, was a bit overpriced, but, I was very hungry, and ate two meals: a bacon double-cheeseburger, and then a pulled pork sandwich with fries.

I caught the shuttle back to Hikertown two hours later, and hung out in the garage for the rest of the evening. It turned out that with my zig-zag excursion this morning, I really lucked out with the weather: some hikers not two hours behind me reported getting snowed on, and even hailed on.

Sparky and Ghost Hiker had arrived yesterday and left in the morning. Trooper arrived with them, but is staying, and will be attempting to get a ride to Tehachapi tomorrow; her shoes are giving her extensive blisters on her feet, and she doesn’t think she could make the hike without making her foot situation worse. She has three pairs of previously broken-in shoes already on their way to Tehachapi that will hopefully resolve the problem.

Other hikers present included Bob Dog, Saunter, Dylan, One Man Band, and Farmer, who also thru-hiked the Appalachian Trail in 2016. Quoi, apparently, is getting into Hikertown tomorrow, not wanting to get here at the end of the day. (She also accidentally left two of her tent stakes at her morning campsite, but didn’t realize it until much later in the day, at which point it was not feasible to go back for them.)

Tomorrow: a hike along the Los Angeles Aqueduct.