I got started on the trail a bit after 6:30, I think my earliest start so far. I went flying down the first four miles of the trail today, all downhill, to the first water source of the day at the Pony Park Day Use Area.

Courtesy of Kitchen Sink, there was trail magic there. He had provided apples, avocados, bananas, cookies, Gatorade, beer (lots of it), eggs, potato salad, and bread, ham, and cheese. I wound up spending an hour there eating a second breakfast (and also filtering water from the park’s water faucet). Also there were Justin, Karen, and Laura, who had camped at the park. A new hiker I hadn’t seen before, Happy Feet, headed up to the park for water as I was leaving.

From the ranger station, the trail began a two mile uphill, which wasn’t too bad, except it was starting to get warm, and even though it was still well before noon, my progress up the hill was slower than I would have liked. When I stopped briefly after the top of the hill to put on suntan lotion, Happy Feet passed me, and though I was now hiking faster now that the trail wasn’t a long uphill, I didn’t see her at all again before I stopped for a break in a tiny shaded area on the side of the trail just past the start of the last major uphill of the day. I did wind up passing her a mile or so later, after she had stopped for a long break. About two-thirds of the way up the last major uphill of the day, she caught up and passed me again. 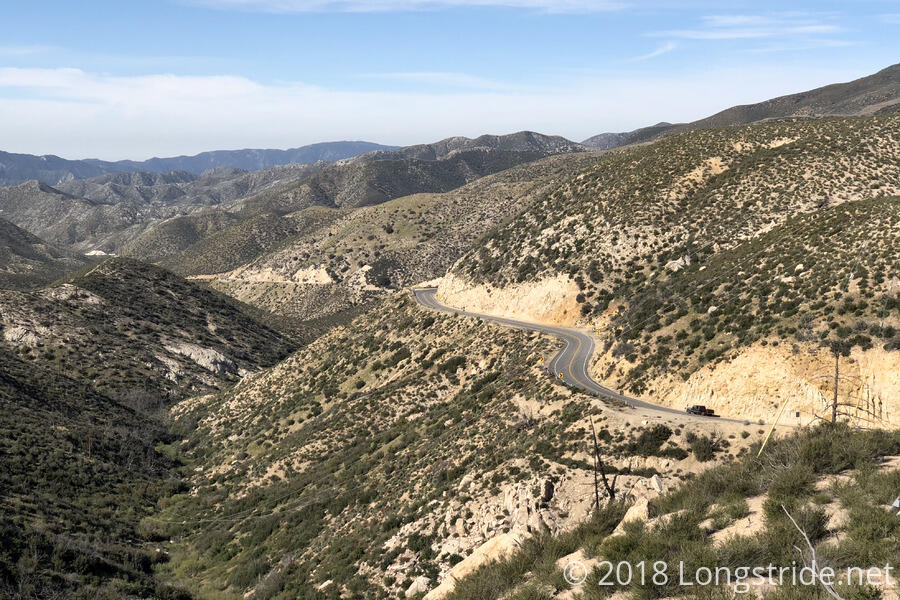 I may have missed the 400 mile marker yesterday, but there were two mile markers written with stones I did see today: 420, and 427.8.

Just after creating that hill and starting several miles of downhill, I found a pink Buff on the ground. Usually I leave lost items where they lie, since I can never be certain they belong to a hiker going in the same direction as me. But, since I hadn’t seen any day hikers, or anyone going south all day, and it looked relatively clean, I figured it probably belonged to a NOBO thru-hiker, so I picked it up. I planned to post a message on the Facebook group asking if anyone had lost it, and worst case, I’d hang on to it until I got to Hiker Heaven in Agua Dulce in a couple of days and drop it in the hiker box there.

During my last break, on the side of the mountain about a mile and a half later, a bunch of very vocal crows were flying around. One of them, carrying a stick, over the course of several minutes, kept transferring the stick between its mouth and talons. I suppose it was trying to show off, since there was no other apparent reason for doing that.

Shortly after that, I ran into Quoi, who was taking a break on the side of the trail. Apparently, she was feeling a little dizzy from over-hydration, and needed to stop for a bit. Dylan, she said was further ahead.

The destination for the day was the North Fork Ranger Station, which allows camping on the premises. I knew that the ranger put out water for hikers (and that there were pit toilets), but I was also pleasantly surprised to find a trash can there. Also, nice to find was a cooler with sodas (and granola bars) by the California Trail Users Coalition (CTUC), available for a $1 donation each. Since the smallest bill I had was a $5, I took five cans of Dr Pepper. Three of them I had for dinner (which I started to regret, as that was three cans of a caffeinated drink only a few hours before bedtime), and two I saved for tomorrow morning.

Happy Feet was already there. The buff I found, it turned out, belonged to her, and she was happy to be reunited with it. Happy Feet is also an ultra marathon runner, which explained how she was so fast. She did the section from Campo to Big Bear Lake in two weeks, more than a week faster than it took me to do that 260 miles. Noting her name, I commented that my own feet were most definitely not happy, having put in over 40 miles between yesterday and today.

Dylan was also there, but he left before Quoi showed up. After she arrived, she didn’t stick around either, staying around long enough to make dinner, and then head out to a campsite further down the trail.

The park ranger took the soda cooler inside shortly before sunset, so I was glad I took all the sodas I wanted before it disappeared, since it didn’t seem likely it would be put back tomorrow morning before I left. The rest of the evening otherwise passed uneventfully, as at least a dozen other hikers gradually filed in.