Although I had planned for a long day today, partially to make up for not going as far yesterday as I wanted, I didn’t manage to wake up any earlier than usual, and only got started hiking around 7:20, which didn’t bode well for the roughly 24 miles I wanted to do.

It was actually fairly cool all day, which was a welcome change from the heat of the previous days. The sun was still pretty well exposed in the morning, though.

I took a short break near the top of the first climb, mostly because the view of the desert there meant there was cell reception. From there, it was mostly downhill to Chimney Creek, my water source for the day.

Hopefully one last close-up view of the desert before heading deeper into the Sierra Nevada.

The views from the trail got noticeably greener, and there was some shade, though not a lot. As with previous days, the landscapes continued to get more diverse. If this is the prelude of what’s ahead, it’s definitely going to be a good show. 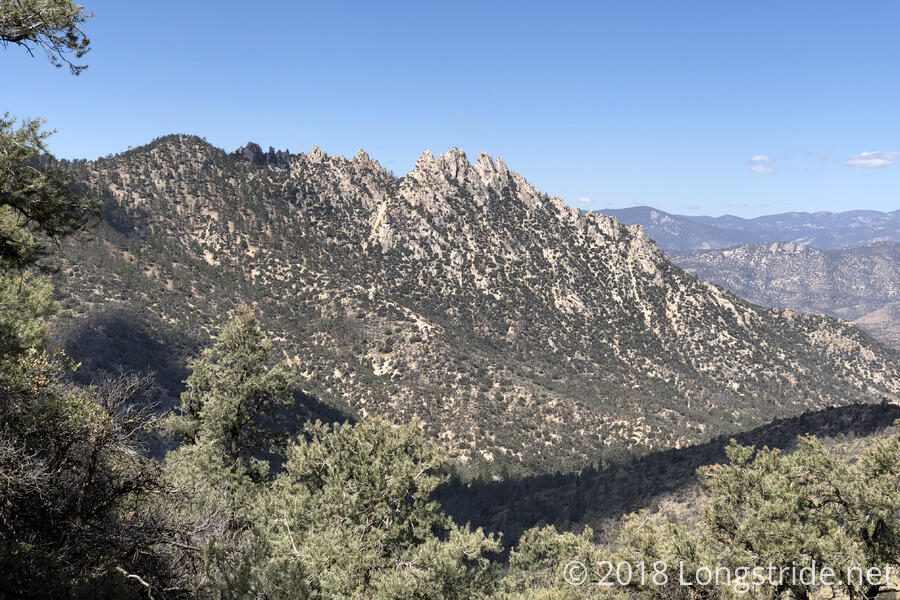 Around 12:30, I made it to Chimney Creek, 12 miles into the day. I decided to take a long break here and make my dinner, so that I wouldn’t have to carry it (or water for it, in the event I didn’t make it to Manter Creek, my 23.8 mile goal). I got water from the creek, and then set up under the shade of a large pine tree and made my dinner. This wound up being one of my largest meals on the trail; I had my usual macaroni and cheese, but I had two packets of ramen instead of just one, and it was supplemented by beef jerky and dried mango slices I bought in Lake Isabella. Some ants crawling around where I sat down also made out pretty well; they got some small pieces of ramen that missed going into my cook pot.

While it was fairly clear in the morning, since about noon, clouds started to blow in, and the afternoon became progressively cloudier. This probably was the cloudiest day on the trail for me so far.

A rumor I had heard yesterday, and then repeated at lunch today, was that there was a storm moving towards Kennedy Meadows that would drop more snow “soon”. I had forgotten to check the weather forecast when I had cell service earlier in the day, so at this point, worrying about it was a bit moot. Either it would snow on me before I get to Kennedy Meadows tomorrow, or I’d be able to get an actual weather report there.

I finished my break and continued hiking around 3, but I was extremely sluggish. I think probably I needed to wait a little while longer so the food could digest. It was bad enough that I felt I had to put music on in order to keep up a reasonable pace. It took me nearly three hours to make it the 6.4 miles to the top of the climb out of Chimney Creek.

As I worked my way up the mountain, I became less convinced I was actually going to make it to Manter Creek. This was a bit of a gamble: I passed by a number of good campsites that were listed in the trail guide on the way up the mountain, hoping that there would be something further on at a reasonable stopping time in the day. (Note that I had no doubt that I could make it to Manter Creek today, especially since the last 6 miles to it are all downhill; I just didn’t want to get to camp after dark.)

So when I got to the top of the climb, around 6 pm, I was very pleasantly surprised to see several good campsites on the saddle. I picked one out and set up my tent as dark clouds in the distance looked vaguely menacing.

As I ate a round of snacks for “dinner”, Cannon and Sassy K Inchworm Sr arrived. They are attempting to go all the way to Kennedy Meadows tonight, a 33.5 mile day, if they are successful.

With the sun hiding behind clouds, it started to get cold before I got to the top. Now that I was standing around doing nothing, it was getting colder still, so as soon as they left, I hid in my sleeping bag to stay warm. By then, it had gotten cool enough that I could see my breath.

The ominous clouds in the distance I was vaguely worried about seem to have gone away sometime after sunset; the sky was largely clear and full of stars when I went out for a bathroom break before going to sleep.

The terrain and scenery today has definitely become more varied, especially as the trail turned west, away from the desert. It’s still got hints of the desert, but there are a lot more trees (and another burn area from a fire) and places where there is actual dirt on the ground instead of sand.

Tomorrow: 15 miles of downhill and relative flat terrain to Kennedy Meadows, usually considered to be the real start of the High Sierra on the PCT.