I wound up pretty miserable last night, from two different causes that prevented me from getting much sleep. First, my brain wouldn’t shut up, so it took forever to fall asleep in the first place. Then, the wind came in the night, and with sufficient force that it blew three tent stakes out.

If the stakes had only blown out once, that probably wouldn’t have been so bad. But two of them pulled out a second time around 4:30 am. At first, I tried to just ignore it, and cocooned myself in my sleeping bag. With one side of my tent collapsed in on me, it wouldn’t have been so bad, except the wind kept blowing, and that side of the tent kept flapping against my sleeping bag, making it slightly colder each time.

I fixed those stakes again, only for them to pull out a third time. I tried to ignore it again for awhile, but I couldn’t get any sleep under those conditions, and sunrise was fast approaching, so I just gave up on trying to sleep, and got up. (Which was a bit harder than usual, given half my tent was in the way of anything I tried to do.) At least I managed to see the sunrise.

I got started a bit after 6 with what I expected would be a relatively easy 17 miles to Walker Pass, most of which would be downhill. Because of that, I figured I would attempt to summit the nearby summit, Skinner Peak, which was only about 100 ft higher than the trail, and not that far away. A dirt road 0.3 miles from my campsite seemed the most likely way to the summit, but the road was so inconspicuous, I overshot it, and by the time I realized I had missed it, I didn’t want to go back and look for it.

As the trail descended the mountain, it entered a nice pine forest with plenty of shade, a very welcome respite from yesterday’s exposed desert trail. 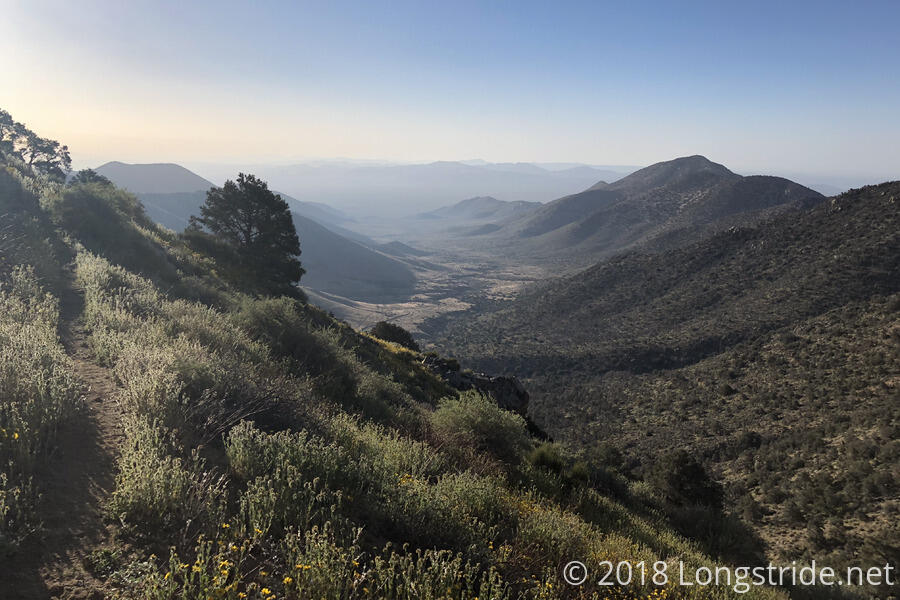 My first break was after a bit more than 7 miles to a dirt road. Having exited the forest, the trail joined the dirt road for over two miles, as the trail turned back into more arid terrain, with sand and sparse trees.

Mount Whitney again made an appearance in the distant skyline, about 66.7 miles (and 130 trail miles) away.

While there have been a few instances of annoying gnats on the trail so far, the ones today were particularly persistent, and proved to be quite annoying even with my sunglasses on. I had to stop and spray on some insect repellant to make them more manageable. 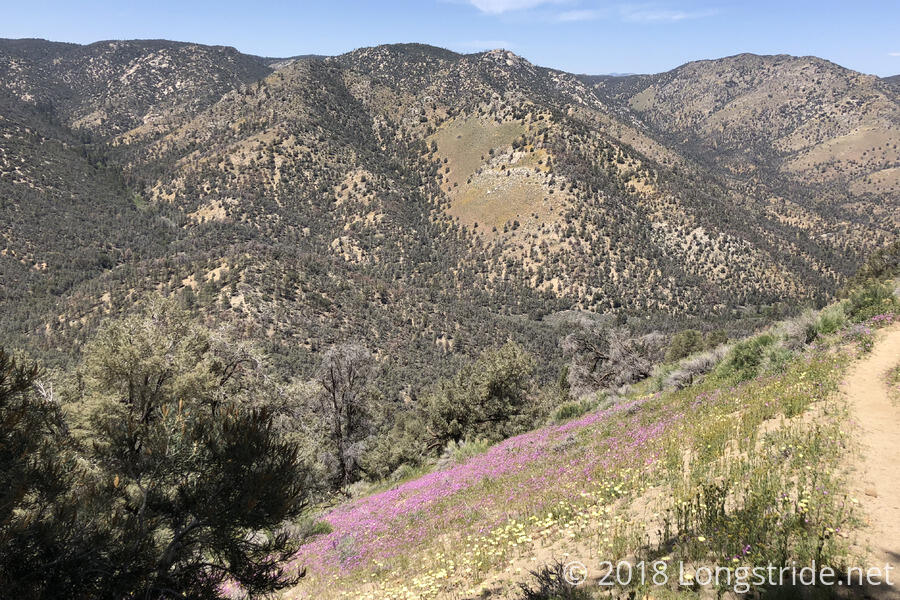 I made it to the Walker Pass Campgrounds around 2:15. Yesterday, Calamity gave me the phone number for a trail angel Quoi recommended, April (and then got April’s new phone number from a town information binder at one of the picnic tables with a water cache at the campground). So my plan was to get into town, hopefully stay at a motel, and if not, stay with April overnight. And possibly for a zero tomorrow, since I was feeling pretty tired from not getting much sleep last night.

This, of course, was complicated by there not being cell service at the trailhead, so while there were trail angels willing to pickup hikers from the trailhead, contacting them was impossible. So, I had to hitch into town.

It took me nearly half an hour to get a ride, no doubt complicated by two other (male) hikers showing up shortly after me and trying to hitch at the same time. But, we did manage to get a ride into town, picked up by a large man who worked in corrections.

They were going to a motel on the outskirts of Lake Isabella, where they had been gifted a room. Not having a better plan, I went where they were going, which I figured would be close enough to town to have cell service (if necessary), and was right next to a Dollar General (so I could pick up one day’s worth of food).

A sign at the motel indicated there was vacancy, so I got out there with them, rather than going closer into town. Unfortunately, though, a sign on the office door said there was no vacancy, which the manager confirmed was the case.

I sent April a text message, and she said she’d be able to host me tonight (so that saved trying to find another hotel with vacancy). She couldn’t come get me — she was having drinks down by the river — but she was able to find another trail angel, Cat, who would be able to pick me up and get me to April.

While I waited for Cat to arrive, I went to the Dollar General next to the motel and got a day’s worth of food: it was totally unnecessary, but I kept hearing about how you should take as much food as you can carry through the Sierra, because you’ll move slower because of all the scenery. With eight days in my bear can that should already be at Kennedy Meadows, this should give me two extra days of food for any conceivable contingencies that might arise.

Cat picked me up and took me to the place on the Kern River where April was hanging out. Also there was Dylan, and some other locals.

There were also three large dogs, who were involved in the most lopsided game of fetch. Each time a stick was thrown into the river, the dogs would start to swim after it, but then after a few seconds, the two dogs behind would stop trying to catch the stick, swim back towards shore, and wait for the dog in the lead to retrieve the stick and return to shore, at which point the two latched on the stick and tried to take it. The dogs kept this up every time a stick was thrown.

Eventually, it was time to move the party to someplace with food, so April took Dylan and I to Pizza Barn, and then went to the bar with the locals.

When we were done (I carried out a box with three slices of pizza), we walked to the bar, and then April drove us to her place. She dropped us off while she took her friend back to his house.

Tomorrow: I kind of wanted to zero in town, but, for various reasons, don’t want to zero at April’s house. So, it’s back to the trail with me.