This morning was a bit of a slow start for both Quoi and myself. Somehow, though, despite feeling unwell, she still managed to leave camp before me!

I got started shortly before 7:30. The trail followed the South Fork San Joaquin River for several miles this morning, gradually heading downhill. The river, fast moving, occasionally had waterfalls, and was a continuous rumble of noise for a while.

I passed Quoi near the bottom of the downhill, at the bridge across Piute Creek, a major tributary of the San Joaquin. The bridge also brought the trail out of Kings Canyon National Park and into the John Muir Wilderness of Sequoia National Forest. (I found it somewhat amusing that Muir Pass was not in the Muir Wilderness.) 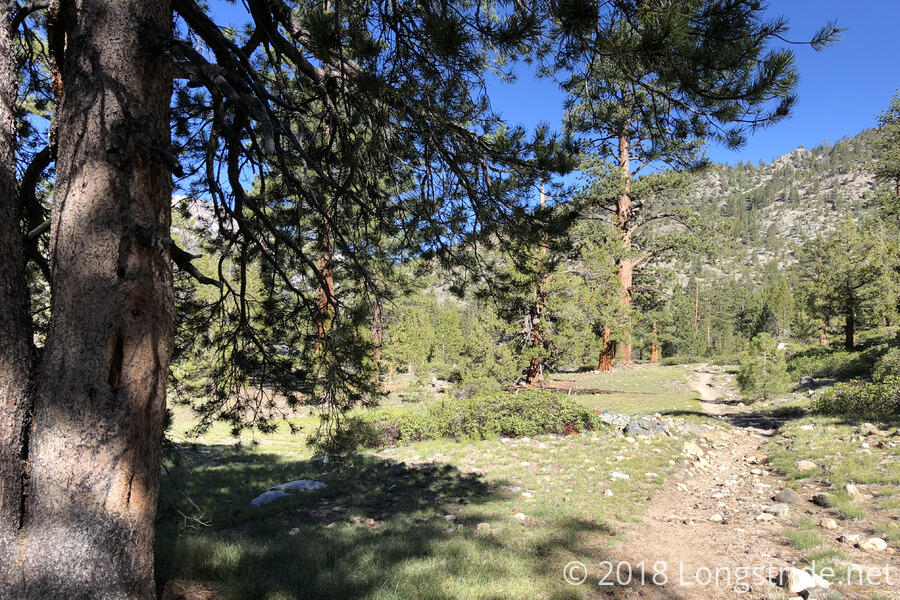 About two miles later, at the end of the downhill, and at the trail junction to the Muir Trail Ranch, I took a break. Muir Trail Ranch is one of two places in the High Sierra wilderness that one can resupply without having to exit to a town. It is also very expensive, as everything must be brought into MTR via pack mule. (It is also still closed for the winter now.)

After the Muir Trail Ranch junction, the trail began a steep uphill climb for the next five miles. Along the way, the trail was a mix of exposed views and forest cover, with a healthy dose of switchbacks. On the way up, I saw a pair of wild turkeys.

I reached the outlet to the Sallie Keyes Lakes around 12:40. With a number of campsites there, I picked a nice one out for myself (that conveniently had a space nearby for Quoi) in the event we decided to stop there, and cooked dinner while I waited for her to catch up. The lakes, apparently quite full of fish, occasionally rippled as one of them jumped out. Ducks floated by on the outlet stream, no doubt happy to feast on the fish there.

As the hour grew later, I began to be concerned with Quoi’s lateness; I knew she was not feeling great this morning and is usually slower on the uphill, but it was getting towards 4 pm and there was still no sign of her. But, people hiking past said she was still on her way.

Given now that it was getting late in the afternoon, I decided the most likely course of action would be to camp here (which was a tiny bit shorter than we had planned), and then leave early tomorrow morning to do Selden Pass and get as far towards Silver Pass as possible.

Quoi made it to the lake around 5, having stopped for dinner along the way, which explained why it took her so long. Very tired (and with the very scenic campsite), she was quite happy to not push further today. We planned for a 4 am departure tomorrow morning, which, if we were lucky, would get us to Selden Pass before sunrise.

I was quite happy to not get my feet wet at all today, a rarity in the Sierra. I doubt tomorrow will be so generous. I’m also happy to be in my sleeping bag before 8 pm, though that’s still not a ton of sleep I’ll be getting before we leave tomorrow morning.