Quoi and I made it through Silver Pass today, the last of the major passes before Mammoth Lakes. The pass, however, demanded a blood sacrifice.

My alarm was set to go off at 3, and it did, but I somehow snoozed my way to 3:30 before I really woke up. This delayed Quoi’s wake-up call, and she had overslept her alarm as well. We started hiking around 4:45 am, which seemed about on-par given the delayed wake-up.

In a first, my headlamp’s battery was so low from using it for night-hiking the past week that it wouldn’t turn on the high output light. I had to have Quoi lead the hike, because I couldn’t see well enough with the “wide angle” lights and their lower illumination.

As we expected it to be, the climb up to the pass from our campsite was steep and wet. The trail first crossed the North Fork Mono Creek, which (especially at 5 am) was cold. It also had a strong flow and was somewhat slippery, and my route through it seemed to go through its deepest section, getting water up past my knees (and soaking the bottom half of my rolled-up pants). Quoi managed a less deep route, and avoided getting her knees wet.

Further uphill, the trail crossed in front of the Silver Pass Creek waterfall, which likewise, was cold, spewed mist into the air, and flooded the trail. The trail’s border provided some stepping stones, but the water flow covered them, and being that they were the edge of the next tier of the waterfall, I thought it a bit unsafe to walk across them. I trudged through the trail itself, re-soaking my shoes. 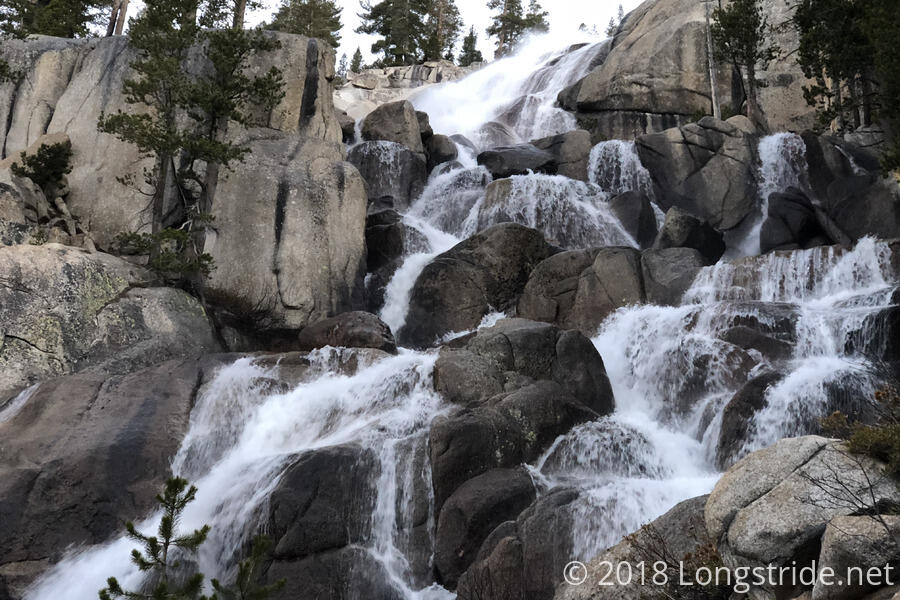 As we climbed, we ran into patches of snow, and even before 6 am, we were occasionally postholing. It wasn’t as warm as it had been the last two mornings, though it wasn’t cold, either. We decided that the overnight temperature was warm enough that all of the melting snow wasn’t able to completely refreeze overnight.

We continued uphill for a while until stopping for a short break, during which time I dried off my feet, and squeezed the water out my socks and shoes. They were still wet, of course, but being less waterlogged made them lighter and a tad warmer.

As we continued climbing towards Silver Pass, the patches of snow gradually grew more frequent, until we were hiking on a snow field.

Passing below a rock island, a loud voice called out, “Hey Longstride! Is today Wednesday?” It took me a moment to answer because it’s not the sort of question one expects to be yelled on the trail (where the day of the week is usually irrelevant). Also, because the voice belonged to Tenderfoot, whom I’d previously only heard speak in a quiet, reserved southern accent, so the loud shouty voice was also a bit surprising.

Tenderfoot caught up with us a short while later when Quoi and I took a break. It turned out that her phone was no longer working properly — it would only turn on when plugged into a battery, which made it somewhat difficult to use. Lacking ready navigational aid (somewhat important when hiking on snow), she joined us, especially when we said we expected to be in town tomorrow.

We continued our snowy hike up to Silver Pass, and took a brief break at a bit of a false summit. It looked like it could have been the pass, but alas, Silver Pass was just a bit further off to the side and uphill.

We made note of a marmot and a weasel that were alternately digging at a hole; Quoi thought it might have been a cathole, but when I went to look, there was nothing obvious in the hole.

After making our way to the actual pass (using the snow to skip part of a switchback), we made our way down the snowy north side of the mountain, the trail defined only by the path prior hikers hiked (or glissaded). Quoi, naturally, was the first to slide down. Not really comfortable with the length or steepness of the slope, I didn’t particularly want to slide down there, but, not wanting to split the group, I did anyway. I felt a bit out of control on the way down, but was unable to use my poles to slow the descent, so I pressed one of my arms into the snow to try and stop me. That was a mistake; the ice rubbed off a chunk of skin, leaving a lightly bloody welt below my wrist. Tenderfoot followed, a bit more controlled than I was.

We continued down the mountain; the previously reserved Tenderfoot swore up a storm every posthole she sunk into, and on several occasions, wound up having to dig her foot out (and refusing help getting out, too).

Another glissade slope, longer than the last, presented itself, and again, Quoi was the first one down. I was instead determined to follow the footsteps off to the side down the steep slope. I got a few steps down and realized that at some point, I was going to slip and slide down the hill. (It wasn’t a question of if; it was a question of when.) I looked over at Tenderfoot to see what she was doing, only to find that she was already sitting down preparing to glissade down, at which point my legs gave up any pretense of being able to walk down the slope, and I found myself on the ground sliding down the hill as well. Fortunately, this one was a bit bumpier and it was a lot easier to control my speed. (Actually, I stopped several times on the way down, and had to push off to keep going.)

We kept going down, making our way over some sketchy water crossings and dealing with postholing until we eventually descended below the snow. At one point, I stepped into snow up to my crotch, though fortunately, did not pull a Flowers and hit anything important. I had to take my pack off to be able to get out of the hole. 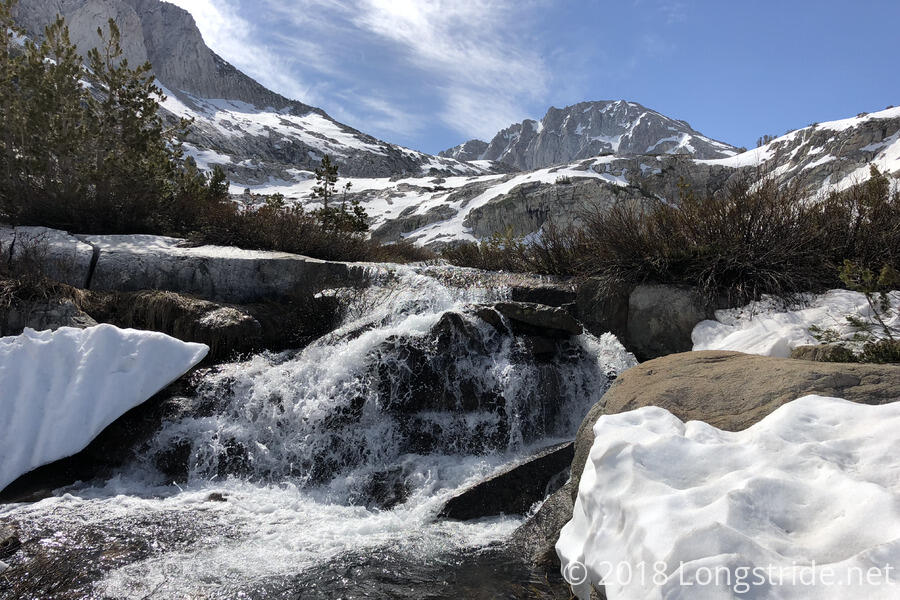 Eventually, we reached the bottom of the hill, and decided it was high time to take a break. Just before we got there, Quoi tripped crossing a small stream, cutting a finger and scraping her leg. As we got her patched up, Tenderfoot revealed that she had fractured a finger during one of the glissades. Silver Pass, the last of the major passes, had demanded blood from each of us.

Quoi and I also suffered minor injuries to our pants. Hers got scraped open where she scraped her knee, and one of my pants legs got a hole poked into it a bit earlier when a tree branch snagged on it as we were cutting around some snow by going through trees.

Quite tired (and injured) from the climb down, we stopped for an extended break. I cooked dinner. All of us dried out our shoes and socks. Tenderfoot also needed to dry out her tent and sleeping bag.

From the campsite we ate lunch at, the trail climbed up a long, steep hill with numerous switchbacks. For most of that climb, the view was of a verdant green river valley, in stark contrast to the white snowed-over view was got for most of our descent. Near the top, we met up at a campsite that was supposed to have cell service, but unfortunately, we got no signal. 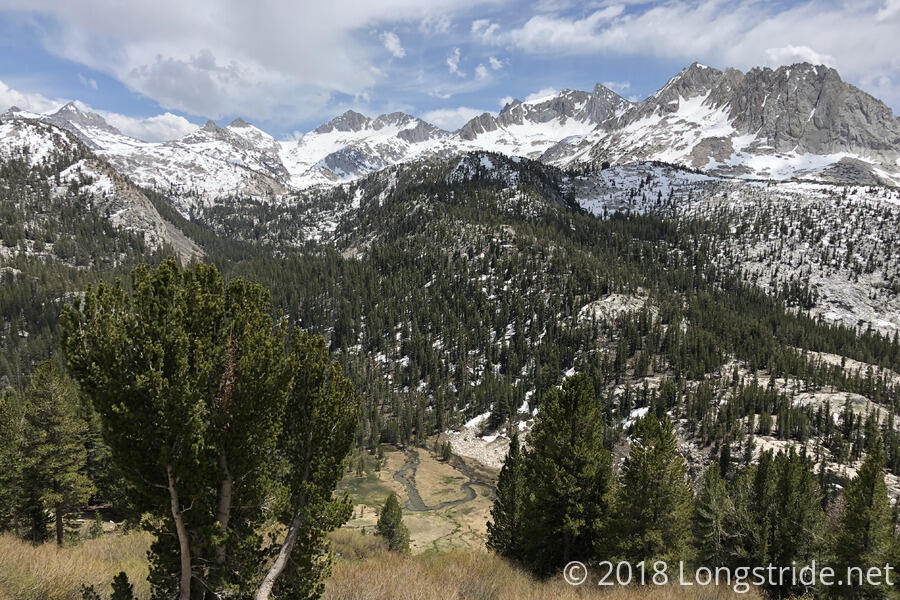 Fish Creek — View of Fish Creek from 500 feet above.

Further on, we crossed Lake Virginia. That is, the trail actually went through the lake. It wasn’t very deep at that point, but the water was very cold, and after crossing, we stopped to dry our feet off. (The bottom didn’t look slippery, so we all crossed in our camp shoes, rather than our boots, sparing our shoes and socks from getting further wet.) We wound up sitting there chatting for longer than we intended. 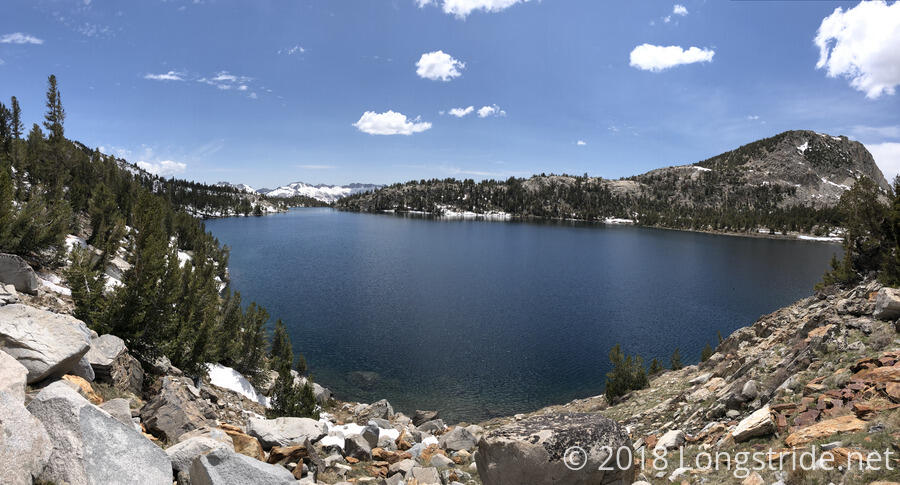 As we were leaving, we noticed a something sitting between the lake and the trail; it was a large recreational flotation device, worn and quite damaged from exposure to the elements. A little further up the trail, we found a second one. We presumed they had been carried here by locals, and then abandoned because they were heavy and they didn’t want to carry them back.

As warm out as it has been, Tenderfoot pointed out that the snow will probably all melt in a few days. I said that I was envious of those hikers a few days behind, since they’ll have much less snow to deal with.

A few miles later, at Purple Lake, we stopped near a campsite for a break. I was pretty tired, and I was hoping we’d decide to stop and camp there, rather than continuing further uphill. We wound up taking a much longer break there sitting around talking then I thought we would, and by the time we were done, I was ready to keep going.

Helping that was that Quoi gave me some of the caffeine additive she uses, a flavor called “green thunder”. To me, it had the distinct taste of snow-cone syrup. It had the desired effect, though: I was able to charge up the next uphill to the campsite we were looking to camp at, two miles past where we took our break.

Unfortunately, when we got there, we found that it was completely buried in snow, so we continued on, hiking through more snow, another three-quarters of a mile downhill, until we got to a campsite adjacent to the outlet for Duck Lake.

The campsite was extremely rocky, with very little soil. This posed a problem for staking my tent: I couldn’t get most of my stakes sufficiently into the ground. I had to use rocks to hold the tent up, either propping up or holding down stakes, or with the tent’s guy lines tied directly around the rocks. I was quite glad that it wasn’t windy, or my tent lines might have suffered more abrasion damage. I also discovered that I have lost two more stakes; my tent requires 6 and wants 8 stakes; normally I carry 10, but now, I had only 7. It’s a good thing we’ll be in town tomorrow so I can get a few more stakes.

Quoi, very hungry from today’s hike, approached me with a gleam in her eyes, wanting to know if she could have one of the extra mac and cheese dinners I had. (She’d pay me back by buying one ford when we got to town.) Happy to have less unnecessary weight to carry tomorrow (and also happy to help fatten Quoi up — she had been complaining about losing too much weight), I gave her one.

Tomorrow: leave at 7 am for a short day into the town of Mammoth Lakes.