Tired, my plan for the day was for a “short” day, so as to get extra sleep tonight. I didn’t really have much in mind planned for that, aside from wanting to be done hiking before 7 pm. (I was still expecting a 20+ mile day, so it wouldn’t be that short. Just closer to 20 than 30.)

The cold morning delayed my emergence from my sleeping bag, and I didn’t start hiking until after 7:30. From Grouse Hill Camp, it was a short distance to reconnect with the PCT, and from there, it was a mostly forested, very gentle downhill for most of the next ten miles.

After 9.6 miles, one of my longest between breaks — largely made possible by the gentle terrain — I stoped for a break at a dirt road that was reported to have a water cache, so I’d be able to refill my water without having to take time to filter it. There was quite a lot of water there (I think about 90 gallons, most of it in 5 gallon jugs). Also there was Devilfish, who maintains this cache and two others. I helped him carry the empty jugs to his SUV.

From the road, the trail started through a sparse forest of tall skinny pine trees. Heading towards Mount Thielsen, the trail steadily climbed upwards, and as it did so, the tree cover got gradually thicker.

At one point, trail overlooked an expansive view to the west, filled with pine trees and lakes. It quite reminded me of Maine. 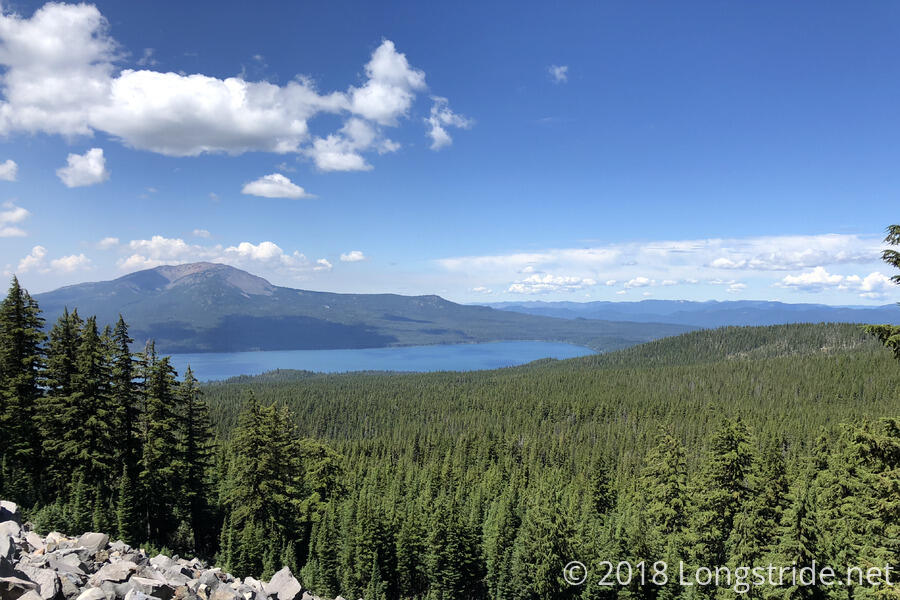 Happily, the smoke from the ongoing fires did not do much to mar the views. I hoped that this would be an ongoing trend.

Around 2, I stopped at Thielsen Creek for diner. With great scenery — Thielsen Mountain providing the backdrop to the creek, which flowed down a series of small cascading waterfalls through a small grass-lined channel — it was a great place to stop, and reminded me a bit of the Sierra. The only problem was that there was no shade where I sat down, but I figured that the sun would soon move behind the trees and the shade would reach me. 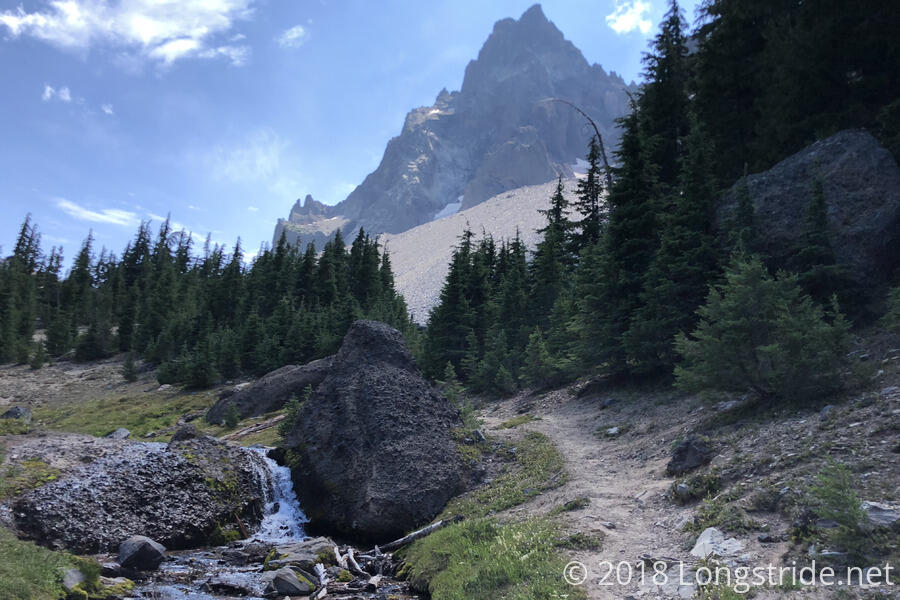 As I expected, the trees provided shade, but with the cool wind that picked up as the afternoon wore away, it started to become a bit cooler than I wanted. The lack of trees immediately near where I was sitting could have made filtering water difficult. Fortunately, a large rock provided a ledge I could lean my water bag on, so it wasn’t that big of a problem.

Late in the day, the trail passed by the high point of the trail in Oregon. A sign there says the elevation there is 7,560 feet, which is also higher than anywhere on the trail in Washington. So, it’s all downhill from here. (As if!)

A mile later, I stopped for the day at a rock outcrop with an incredible view to the east. Getting there at 6:20, I quite easily met my goal of finishing before 7, and at 23 miles, I had progressed nicely down the trail. As the sun started to dip, with the breeze that was blowing, it had started to become cool, and I disappeared into my tent as quickly as I could set it up.