It was cool and windy this morning, and also quite damp. The dampness didn’t really make sense until I got out of my tent and found that fog had enveloped my campsite overnight. 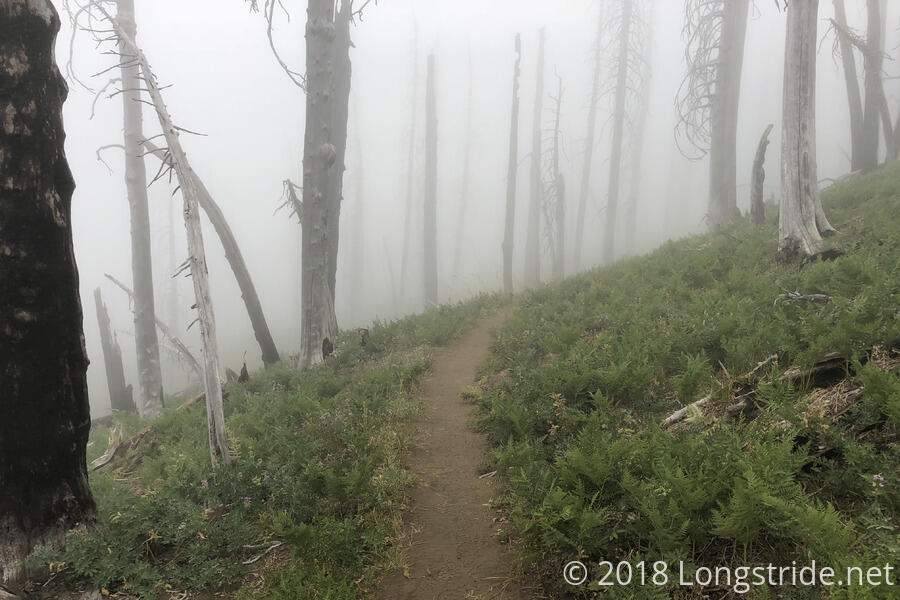 The lava field I hiked through yesterday continued for another few miles. It was a nice change of scenery, but I was glad to get the rough trail done and out of the way early in the day. This should be the last of the lava rock in Oregon. It was rough, but there was just enough of it to get a good taste without it being excessively irritating.

Not surprisingly, since a large portion of Oregon was on fire last year, the trail went through another burn area.

After hiking down off the lava field, then up through the burned forest alongside Mount Washington, and back down, I reached the side trail that goes to Big Lake Youth Camp. A little less than a mile off-trail, I made it to the camp a little after 10. I had somewhat mixed luck with timing: they weren’t serving food this afternoon (because it was a Saturday), and after breakfast tomorrow, they aren’t serving food at all until breakfast on Wednesday because staff will be out. They did, however provide us with several trays of food components that went into bag lunches for people at the camp: peanut butter and jelly sandwiches, apples, chips, and snack bars, among other items.

The camp generously has a building dedicated for PCT hikers, with a common area that has a small kitchen, and a back room that has laundry and two showers.

I was there about six hours — I wanted to do laundry, and with only one washer and dryer available, it took a while for it to free up — but it was a pretty nice place to relax.

While I was inside, the weather outside cleared up. The fog lifted, and the sky was bright and blue, with fluffy clouds. 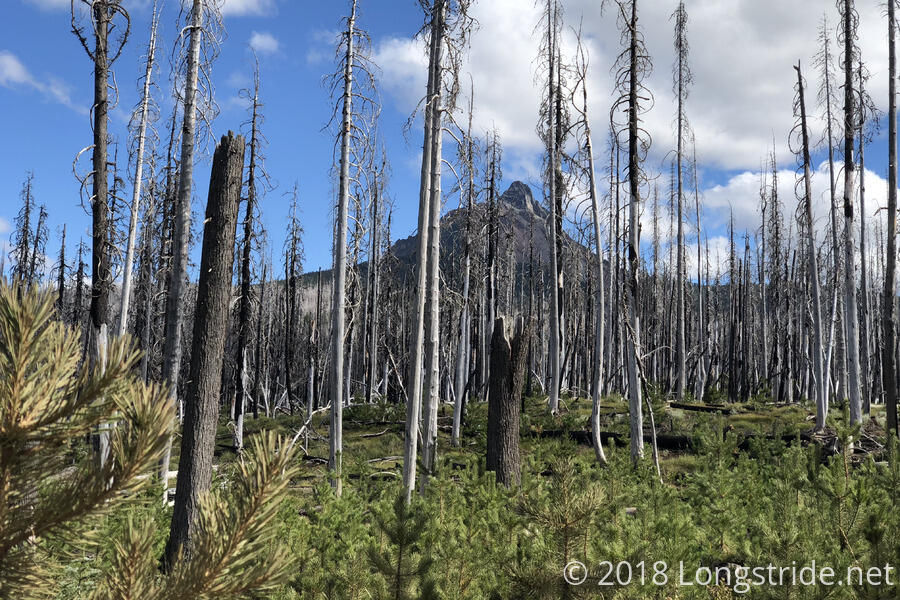 Rather than backtrack a mile back to the PCT, I continued north from the camp, walking along two roads to rejoin the PCT where it crossed. Once back on the PCT, the trail went through a fairly shaded forest that had shared use with a network of ski trails. Despite the occasional dead tree along the trail, it was quite picturesque. 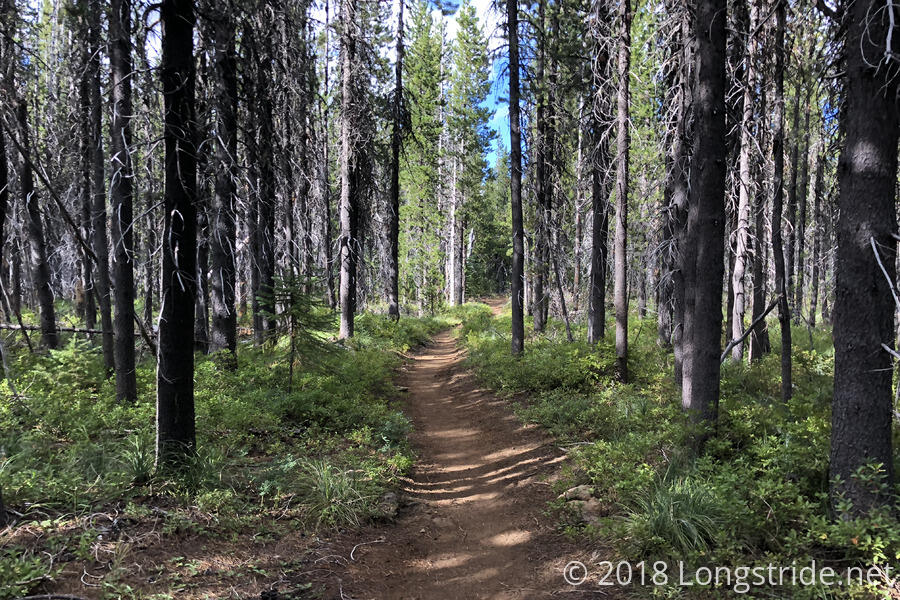 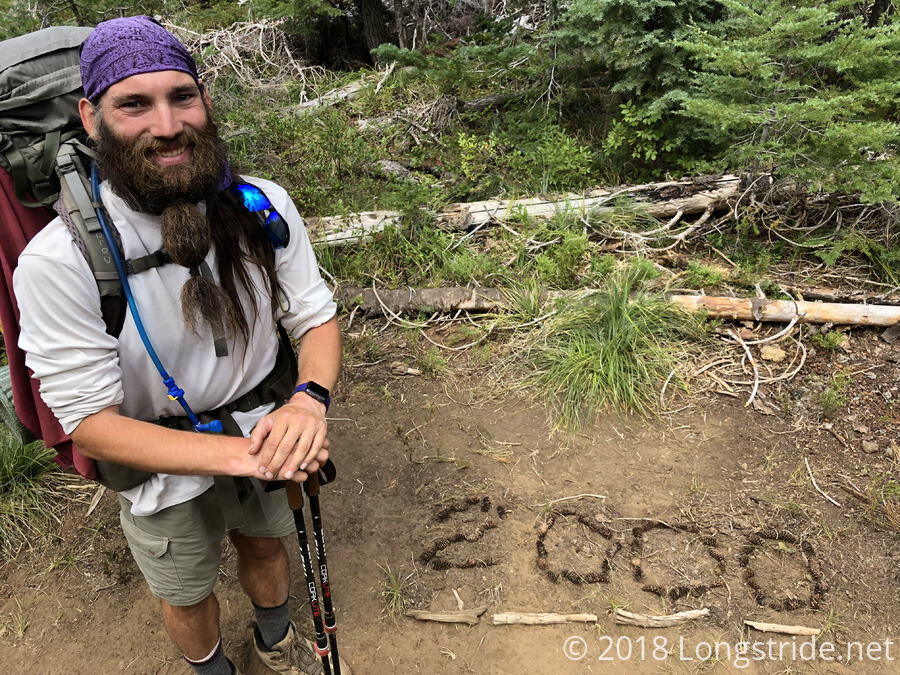 The trail was mostly flat near Big Lake, but after crossing US 20, the trail started climbing towards another volcano, Three Fingered Jack, so-named because it looks like it has three fingers. 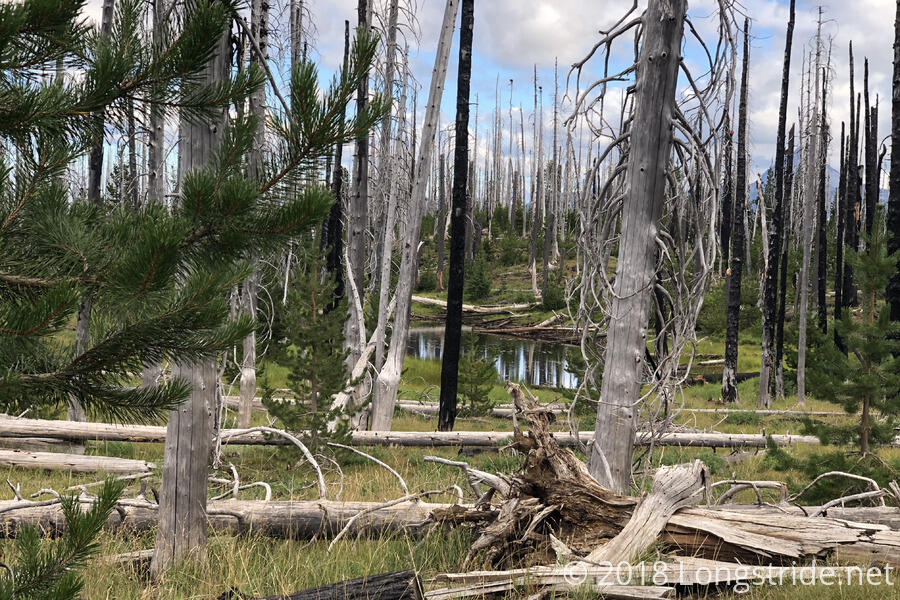 As the trail climbed, the weather cooled, and a breeze picked up. The air was nice and crisp, with clear views; smoke from the fires was blown away (though I’m sure it’ll be back soon enough).

On my way up, a couple stoped to give me a bag of peanut butter M&Ms. I probably would have eaten them right then, but it was starting to get cold, and I didn’t want to stop moving.

I stopped after 17.8 miles at a sheltered campsite on the side of the trail. I was aiming for a campsite another half mile further on, but it was starting to get cold and there were a lot of people ahead of me; l didn’t want to risk not getting a campsite, or having to camp at a windy spot.

Almost cold out, I was glad to be in my sleeping bag around 7:15, and I went to sleep early. Short day plus early bed time should make for a good start tomorrow.