It was cooler this morning, and I actually hiked for a while with long pants and my fleece, until the temperature warmed up enough that they weren’t necessary. 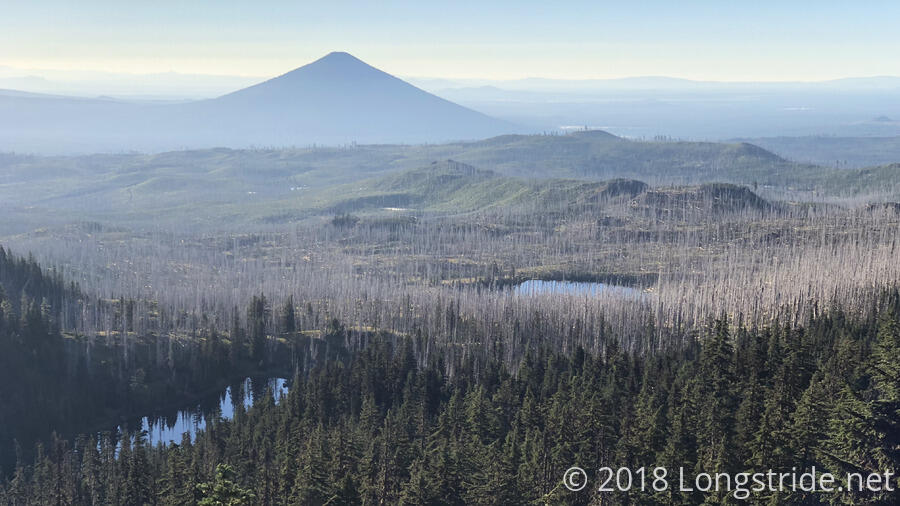 The day started off with an easy up-and-down, as the trail went around the west side of Three Fingered Jack. It was a largely exposed portion of trail, but the sun was low in the sky, so most of the time I was in shade. Despite the smoke from fires in the distance, the views were good — at least, better than they’ve been most days recently. I suspect the wind last night helped clear the air a little bit. 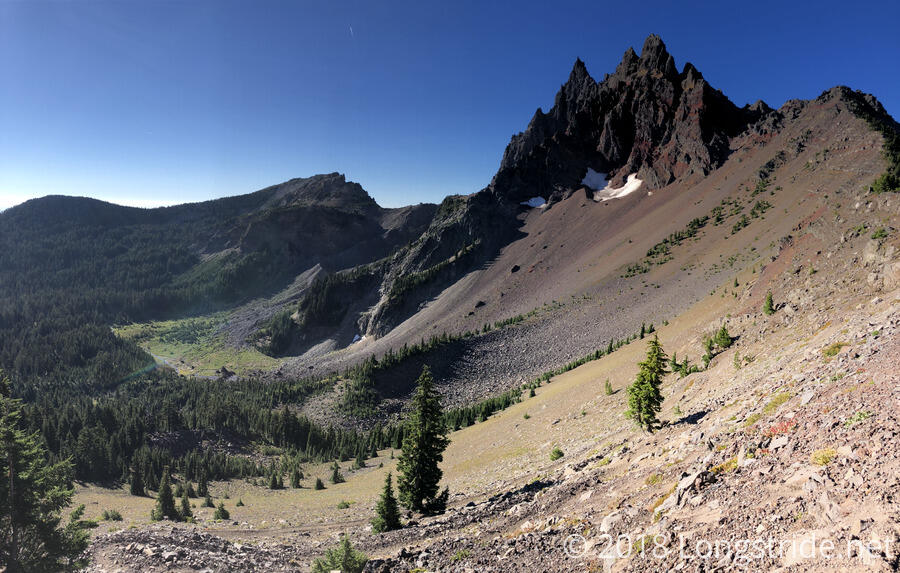 As the trail headed north, and especially after it passed Three Fingered Jack, Mount Jefferson came into view, becoming a commanding presence in the northern skyline.

For the most part today, the trail was pretty easy to hike. In the morning, at least, there wasn’t too much burn area, though that changed later in the day. 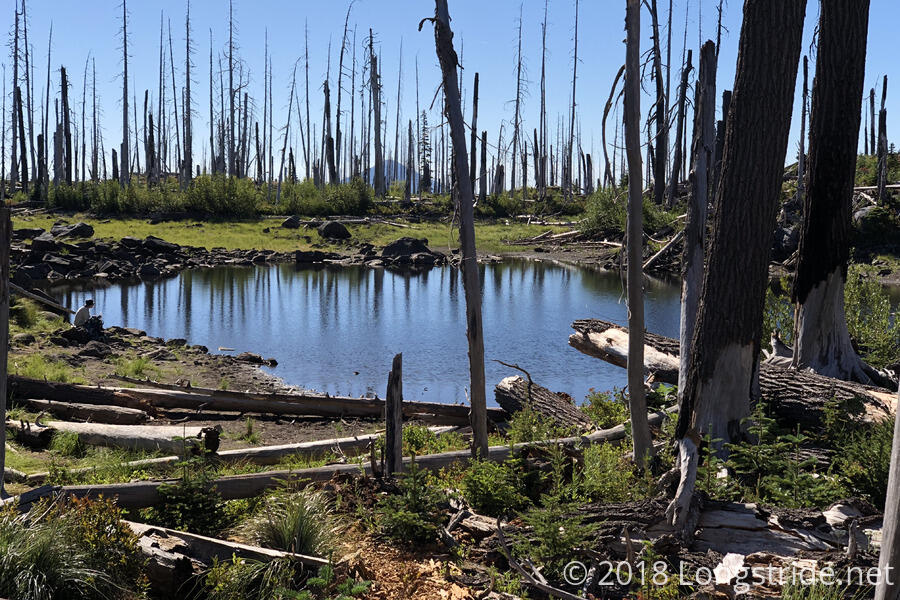 I stopped for a break at a campsite with a great view of Mount Jefferson. It was a little breezy while I was there. Interestingly, when the direction of the wind changed, so too did the air temperature; wind from the west was cool, while wind from the east was warm.

A good part of the morning and afternoon had wide-open views, especially of Mount Jefferson, which, when visible, was easily the dominant feature in the afternoon. 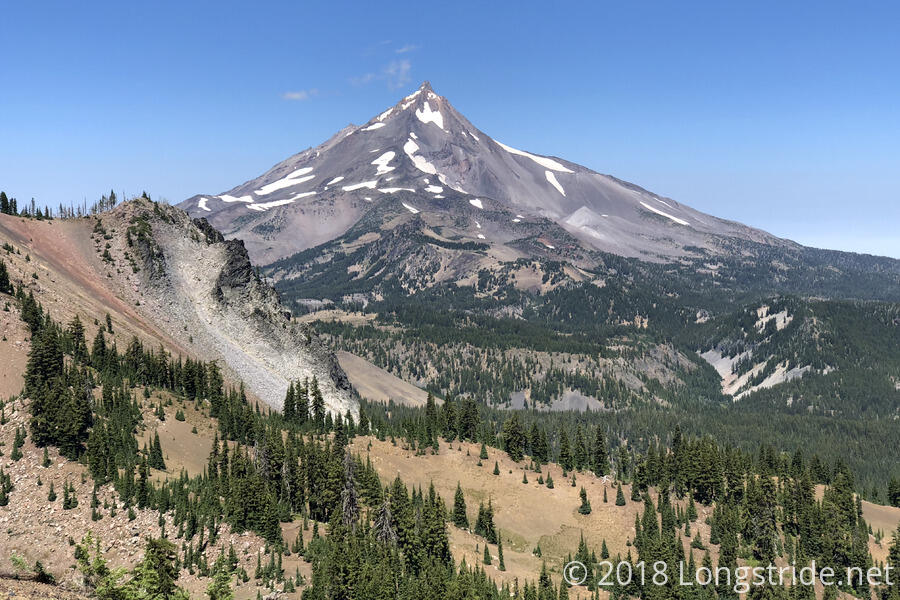 I stopped for dinner at 3 pm, at Shale Lake. In the Coyote/Shale Lake Limited Entry Area, I wouldn’t be able to camp here, but it was a nice, quiet place to eat. The lake itself didn’t seem very deep, but the water was pretty clear. My water filter, though, continued to be annoyingly slow. If I didn’t have a spare one at home, I’d consider buying a replacement the next time I’m in town. 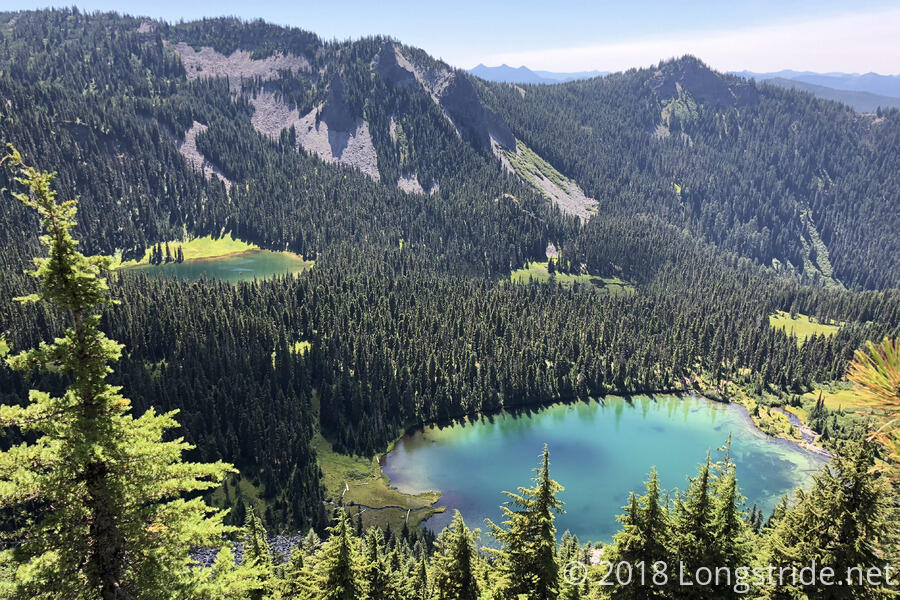 From Shale Lake, the trail was a nice, five mile downhill to Milk Creek, which is fed by multiple streams that flow from the west side of Mount Jefferson. Near the creek, I happened across a hiker who was out for only a short section attempting to “hide” his food bag from animals by half-burying it under rocks near the trail. I appreciated that he didn’t want to do a bad hang — there really weren’t any suitable trees with which to properly hang food bags — under rocks was arguably worse. While it’s usually not best practice, I suggested that in this case, putting his food bags in his tent was probably the least-bad option.

Milk Creek was one of the larger stream crossings since the Sierra, and while it wasn’t that hard to cross, it did take a little searching around to find a dry crossing.

After crossing the creek, the trail headed uphill and into an extensive burn area. I stopped at the next campsite, two miles after the creek. Camping directly in a burn area wasn’t really high on my list of places to camp, but if I wanted to get started on the uphill today — because there was six more miles of it, and relatively steep, too — this was the best camping option.

My campsite overlooked a small pond. It was more scenery than anything practical — I wouldn’t want to drink water, even filtered, from a pond right in the middle of a burn area — but it was a nice touch in the middle of otherwise bleak landscape.