It was somewhat cool, humid, and dreary this morning, but that was fine; the afternoon would turn out to be much, much better. 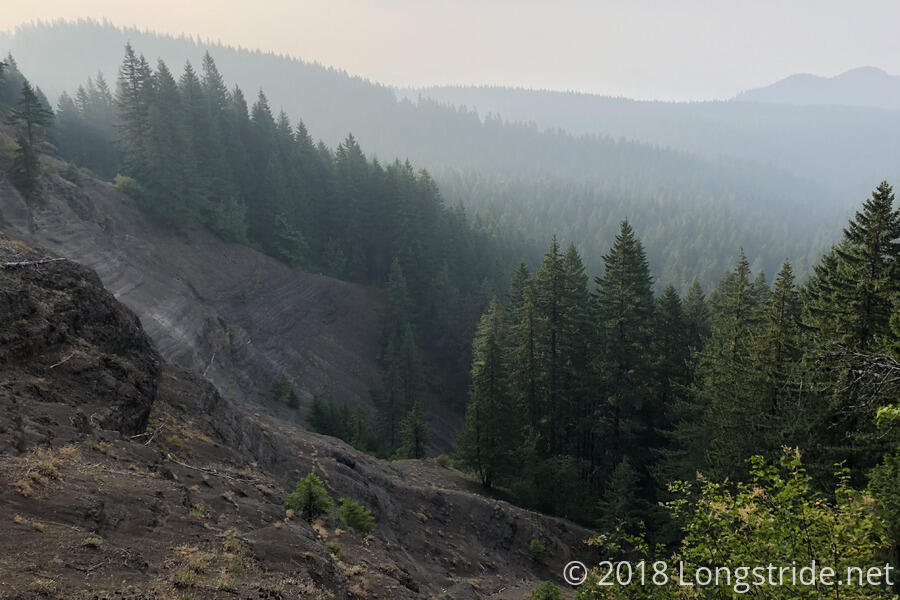 After leaving my campsite from last night, the trail continued to climb up the mountain. As it did, it got cooler, and I hiked up into the the low clouds, which blew along the mountaintops and covered everything in a fine mist of water.

Two miles into the day, I passed 2189.1 miles, the length of the Appalachian Trail in 2016 when I hiked it. This now makes this hike the longest hike (in distance) that I’ve ever been on.

After six miles, at a dirt road crossing, I took a short break. It actually felt pretty cold when I wasn’t moving, which helped keep that break short.

A few miles later, I passed a trailhead somewhat in the middle of nowhere that had a few campsites, picnic tables, and a pit toilet. There was also an empty chest of trail magic. (Well, it wasn’t completely empty: it had trash in it now.) It would have been a great place to take a break if it had been another mile or two.

I passed by several small lakes and ponds over the course of the afternoon. I stopped at Sheep Lake for a snack. Not quite half a mile later, I passed 2200 miles. A bit later, I passed the (quite green) Green Lake. 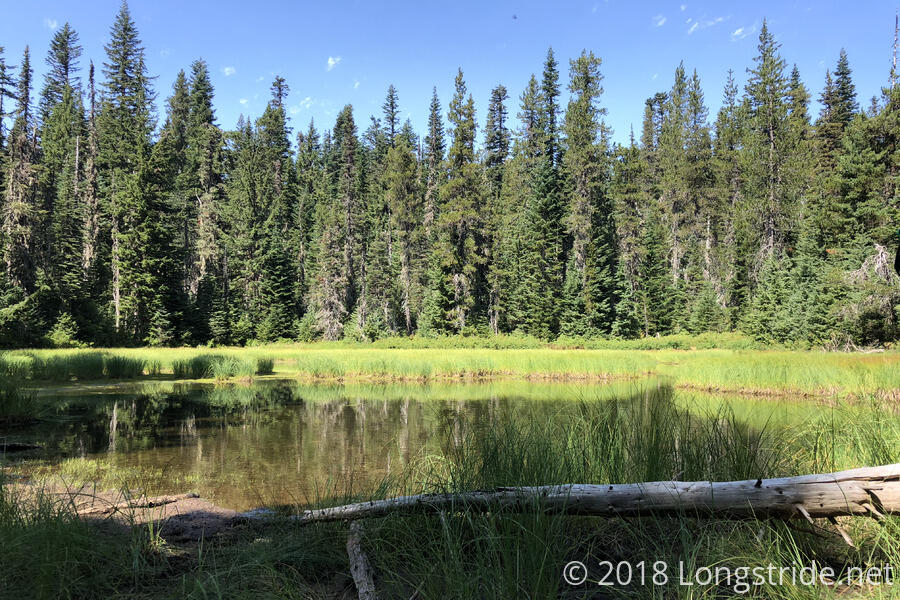 The fog had lifted earlier late in the morning, but as the afternoon progressed, the clouds cleared up. In a very welcome clearing of the sky, I was able to see, separately, Mounts Hood, Adams, and St. Helens this afternoon. With Mount Hood about 45 miles away, it’s almost astounding that the air is clear enough to see anything at that distance. 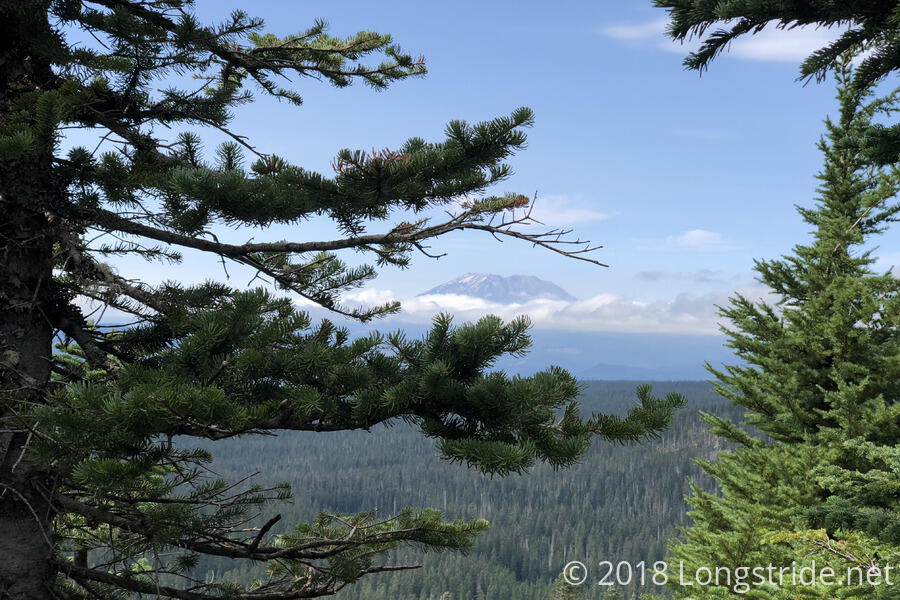 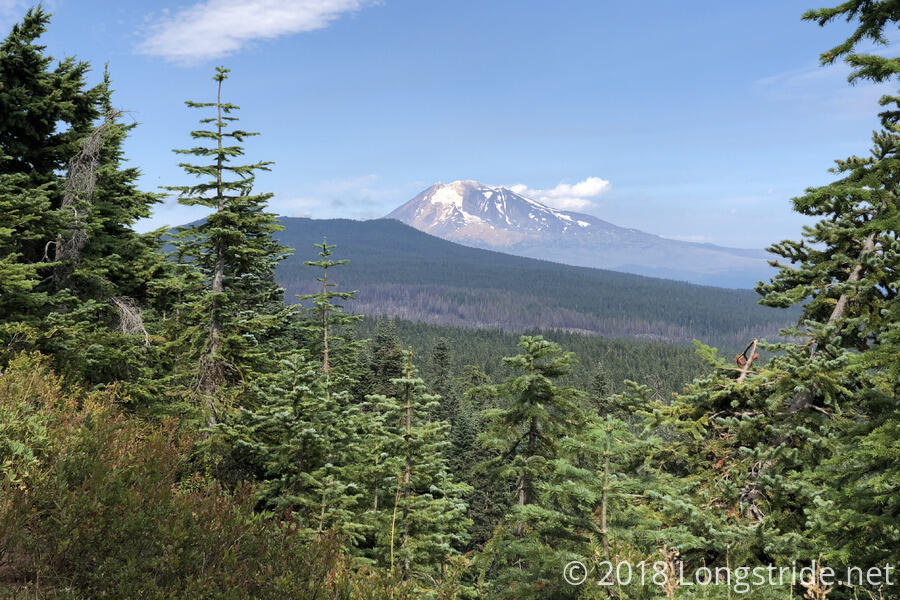 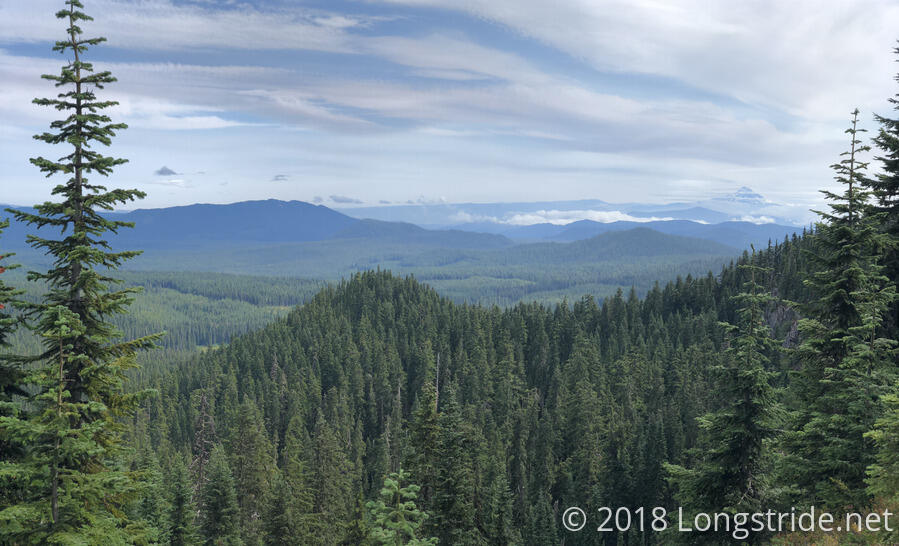 I stopped for dinner at the beautiful (and very blue) Blue Lake. While I was there, it was fairly windy, and pretty cool out; I had to put my fleece on and my pants legs back on to stay warm. 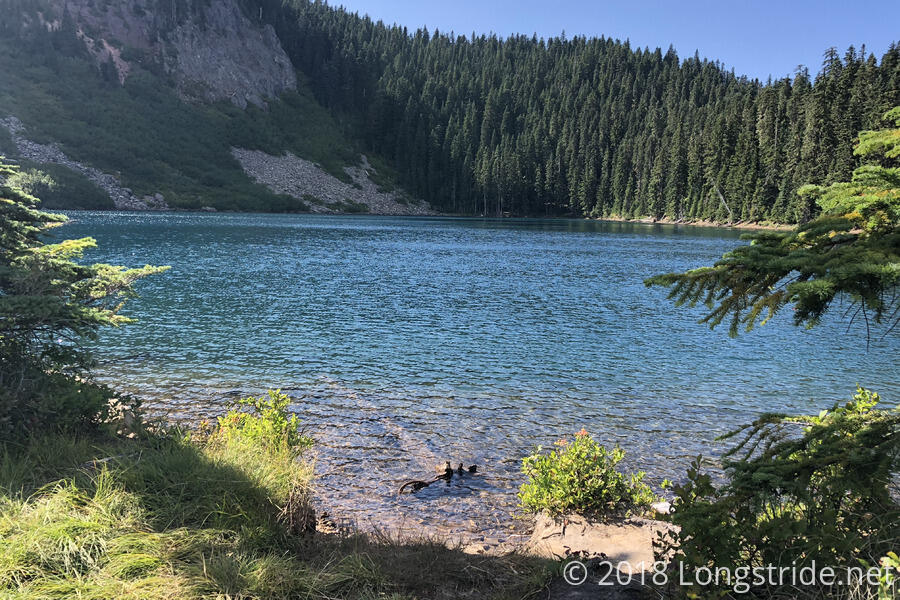 After finishing dinner, I hiked for another two miles, stopping at Junction Lake. While it was still early, around 6:20, and I would have liked to hike further, the next listed campsite is eight miles ahead. I suspect there’s probably some closer, but as I’ve mentioned before, I don’t like to take that risk.

With Trout Lake in 21.6 miles and an easy elevation profile, I should be able to get there relatively early in the afternoon if I manage to leave camp early tomorrow. The only thing jeopardizing that was the realization that, as I was getting my tent out of my pack, I did not remember putting my tent stakes back in my pack after dinner. Not again. But, a thorough search of my pack confirmed that, indeed, my tent stakes were missing.

At least it was a little better than last time, where I had three miles to backtrack. This time, it was only two miles back to where they must have been, at Blue Lake, and with less elevation to gain as well.

I hiked halfway back, and then dropped my pack at the edge of the burn area (so it would be easy to find on my way back). I made it most of the way back to Blue Lake when I ran into Skywalker and Kate, who saw the stakes bag lying on the ground and picked it up.

Back at Junction Lake, fog began to roll in, and it quickly became pretty damp out. Likely, my tent would be fairly wet in the morning, but I can deal with that tomorrow.

Besides exceeding the length of the Appalachian Trail and passing 2200 miles, the trail today also passed further north than Mount Katahdin, the northern terminus of the AT, making today filled with milestones.