Although I set my alarm for six, I didn’t roll out of bed until an hour later. Keeping the blinds drawn didn’t provide any cue that the sun was starting to come up, and the alarm going off was a pretty rude awakening.

With my motel room pretty close to the Bridgeside restaurant, and plenty of time until checkout, I left my pack in the motel room, rather than packing everything up before breakfast. That got me an early breakfast, but meant I didn’t start hiking until almost 9:30.

The last bit of Oregon was a few tenths of a mile to the Bridge of the Gods. The bridge, a two-lane metal bridge with no shoulder or pedestrian sidewalk spans the Columbia River, which separates Oregon and Washington. A sign directs pedestrians — really, hikers, because who else is going to walk across a bridge like that if they don’t have to? — to walk on the side of the bridge with oncoming traffic.

I was quite glad to be crossing the bridge on a Tuesday morning, rather than when I got to town, a Saturday afternoon. Traffic on the bridge was backed up when I got to town (though possibly because of Trail Days); this morning, while there was some traffic, it wasn’t too bad; maybe 15 or 20 cars and trucks passed me going in either direction.

The border between Oregon and Washington is in the middle of the river, so I don’t have a picture of me at the border; there was just enough traffic on the bridge that I thought it’d be unsafe to try and get a photo.

As Oregon ended with a long, and somewhat steep descent into Columbia Gorge, so too did Washington begin with a long and steep climb out of the gorge. (That said, the descent in Oregon was longer and steeper.) Washington is also starting out with a much different mix of trees. A substantial percentage of trees in the forest today were not pine trees, and there were a lot more ferns than I was accustomed to seeing. This is probably due to the low elevation — only 170 feet above sea level on both sides of the river. (A large portion of the descent to Cascade Locks was through a burn area, though, so it’s harder to tell what sort of trees and ground cover were there previously, but I wouldn’t be surprised if there was a lack of pines there as well.)

The fires to the north made their presence known quite clearly and immediately. There was a light scent of fire in the air, mostly in the morning, and every view today was obscured with smoke. I suspect this is going to be the case for the rest of my hike, unless there’s a huge rainstorm (with no lightning, please!) that puts the fires out. 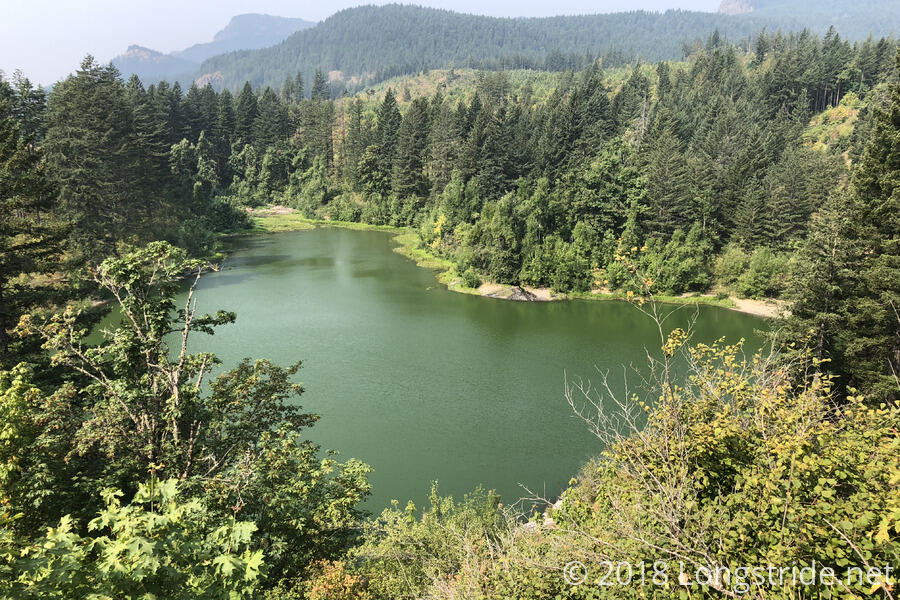 I took a break after about six miles at a campsite near a small creek. The wind to there alternated between calm and light gusts, which was nice because it was somewhat hot out. Notably, Washington, at least so far one day in, has been much less dusty so far than California and Oregon, and I hope that trend continues.

To where I stopped for my break, the trail was generally uphill, it bounced up and down a lot, so it didn’t gain elevation that quickly. After the stream, though, it got steeper and was more continuously uphill, so I gained elevation in the dense forest relatively quickly.

As I continued climbing, the winds calmed considerably, and there was rarely much of a breeze as the trail traveled away from Columbia Gorge. After about five and a half miles of relatively steep climbing from the creek, the trail crested a saddle and headed downhill, going through a half a mile stretch that had been cleared of trees. There had obviously been a logging operation in the past (and there were a few dirt roads in the clearing that were not on my map), but it was unclear to me if this was the result of a fire.

I stopped for another break at a campsite, after which the trail leveled out. After bouncing around a bit, the trail went steeply downhill until it met Rock Creek.

A little shy of 20 miles, I stopped at a campsite on the north side of Rock Creek. It was a cozy site, not that much larger than my tent, but it came with a large, not quite flat, section of a large tree that worked as a makeshift table. There were larger campsites on the south side of the creek, though they were occupied; one of the sites could easily hold multiple tents, but an inconsiderate hiker had “reserved” them by placing their trekking poles over them. (Campsites are generally always first-come-first-serve, and it’s frowned upon to reserve spots for people not there.)

So far, all the water crossings in Washington have been over bridges, including a large one over Rock Creek. I’m sure that’s not going to last very long, but it does give a positive impression of Washington’s trail maintenance.