Today was my 20th day in a row without a zero, hiking nearly the entirety of Oregon, from Ashland to Cascade Locks, without a break. I felt a bit sluggish getting up this morning, but it took me less than an hour from when I got up to when I started hiking, so I guess I just felt more tired than I actually was.

The trail started off circling around the eastern side of Wahtum Lake, then continued northward, eventually entering the burn area from last year’s Eagle Creek Fire. While in the burn area, I got a nice view of both Mount Adams and Mount St. Helens, both just barely peeking over the smoke. 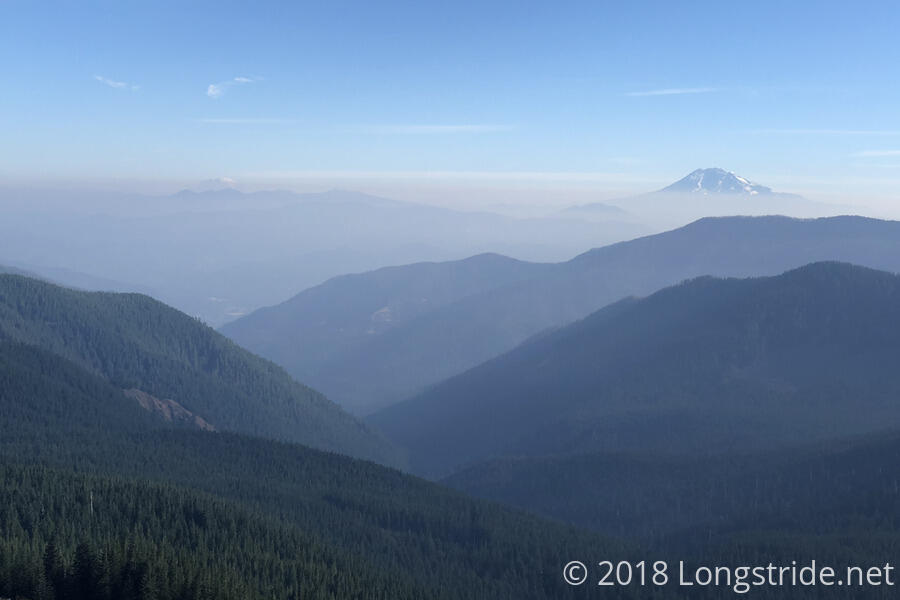 Mounts Adams and St. Helens — First view of both Mount Adams (right) and Mount St. Helens (left). Both are greatly obscured by smoke from fires.

After about six miles of relatively gradual ups and downs, the trail began its descent to Cascade Locks. Two more miles of gradual downhill gave way to a steep drop into Columbia Gorge, as the trail shed 4,000 feet of elevation on its way to the Bridge of the Gods, the lowest elevation on the PCT, where the trail crosses the Columbia River, leaves Oregon, and enters Washington. The trail was somewhat stingy about providing views to the gorge, but at one viewpoint, I was able to see both Cascade Locks and Stevenson, WA, just across the river.

At Cascade Locks, the elevation is only 170 feet, a far cry from the multiple thousands of feet the trail has traveled the majority of its length at. The last time the trail was this low was over four months ago, just north of San Jacinto and outside of Cabazon.

Columbia Gorge — The towns of Cascade Locks, OR (near) and Stevenson, WA (far) lie along the banks of the Columbia River.

Around 2:30, I arrived at the trailhead near the Bridge of the Gods. Not ready to leave Oregon, I cut through the public park on the hill between the ramp to the bridge, and Cascade Locks’ main street, which very conveniently put me at the Bridgeside Restaurant, where I had planned to get lunch. Inside, hikers had pushed a set of tables together in the middle of the dining room, and I joined them after placing my order. (I got a Hawaiian burger, and a slice of Marionberry pie with ice cream, which I ate first while watering for my burger.) Jelly and Verde (who were with me when I left Ashland three weeks ago) were among the hikers at the table.

The main activity in Cascade Locks this weekend is Trail Days, which serves as a bit of a reunion for hikers (some people skip forward, or come back, to attend, allowing people who haven’t seen each other in awhile to reconnect). There are also a couple of dozen vendor booths from companies who make hiking gear, as well as food, music, and video events. Trail Days started yesterday afternoon, and will continue through tomorrow morning with a free breakfast for hikers.

Although I was really hoping to have made it past Cascade Locks before Trail Days (because I didn’t want to deal with the crowds), actually being at Trail Days was surprisingly productive. Upon arrival, I made my way to the Zpacks booth, and was able to get them to replace the zipper sliders on my tent. They had sent me the sliders, and instructions for how to repair it myself, but watching them do it, which took nearly an hour, it was clear to me that this wasn’t something I would have been able to do well myself. They also replaced most of the guylines on my tent. The sheathing for the lines had frayed early on, and while I was surprised at how well they had held together since then, I was glad to have them replaced so that I wouldn’t have to worry about that anymore. They also gave me a new sack to put my tent in, replacing the one that blew away the day before I got to Wrightwood. The one they gave me was slightly larger than the one the tent came with, which I’m sure is going to make it way easier to get the tent in the bag. That difficulty was one of my largest frustrations with the bag that came with the tent.

I also met a representative from Leki, who was able to replace the broken lock on my poles.

Because of Trail Days, Thunder Island, in the Columbia River on the other side of a canal, had been turned into a giant tent city, with probably over a hundred tents set up along the island. I found an open spot, and pitched my tent. 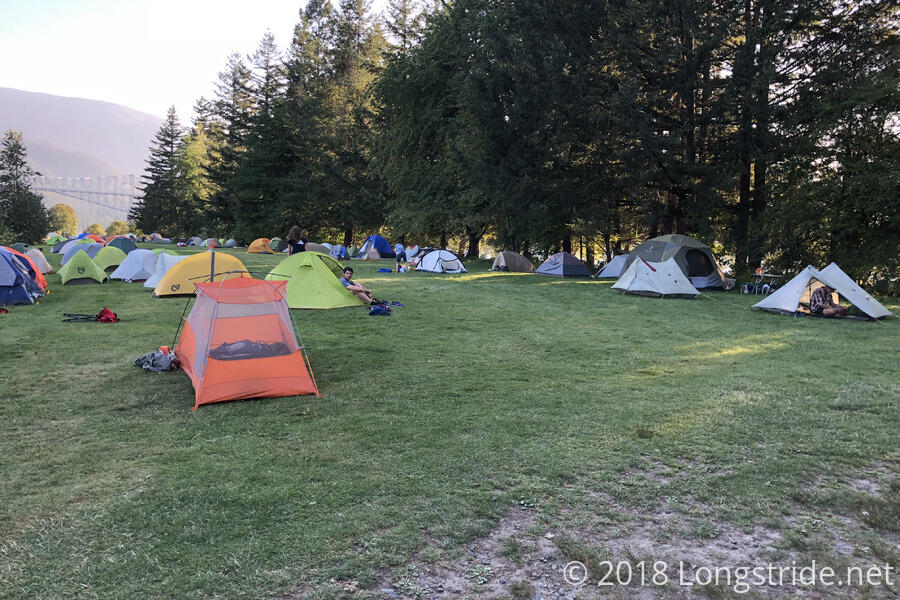 Tent City — Just some of the many tents set up on Thunder Island for Trail Days. The Bridge of the Gods and the Columbia River stand in the background.

I had dinner at the Cascade Locks Ale House with a few hikers, then returned to my tent to check on the fire closure in Washington, and try and get some sleep. 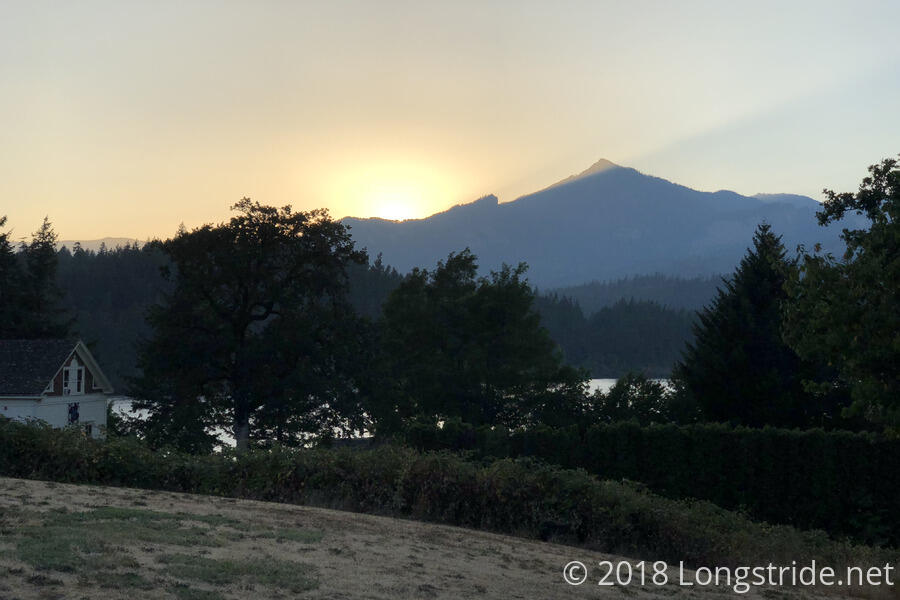 What I thought was one fire closure in Washington turned out to be three closures. The first, near White Pass and Packwood, isn’t that big of a problem; a detour cuts around the fire and reconnects to the trail, and aside from differences in elevation gain, the detour doesn’t look to be much longer than the PCT.

The second closure, near Stehekin, is slightly problematic, since the detour doesn’t directly reconnect to the PCT, requiring a roadwalk to maintain a continuous footpath.

The third closure, though, is the most problematic. The Holman Fire, in the Pasayten Wilderness, has closed the trail from Harts Pass, 30 miles from the border, making it impossible to access the northern terminus from the US. Additionally, the roads around Harts Pass are closed, making it not recommended to hike past Rainy Pass, 60 miles from Canada. At present, there’s no detour, and given the trail ends at the Canadian border, it’s hard to see how there could be one to terminus. More information will come, I’m sure, but for now, this is disappointing. The only thing I can really do is keep hiking, and hope the situation improves in some way.

While I was researching the fire closures, I could hear the sounds of fireworks coming from outside. Not expecting there to be a fireworks show, I didn’t initially get out of my tent, and then finally when I did, it was right after the last volley, so I didn’t actually see anything. Given the fires, though, I felt that a fireworks show was entirely bad form.

There were also trains that went by throughout the evening, some louder than others. They sounded far enough away, though, that I don’t think it’s going to be that big of a problem while I’m trying to sleep.

This post contains links to amazon.com. As an Amazon Associate, I earn from qualifying purchases.
Pacific Crest Trail, 2018
« (Day 150: I Can See Washington From Here) Previous Entry
Next Entry (Day 152: Zero in Cascade Locks) »