Today started off with considerably nicer weather than yesterday’s: a nearly cloud-free sky that led to great views for the whole day. 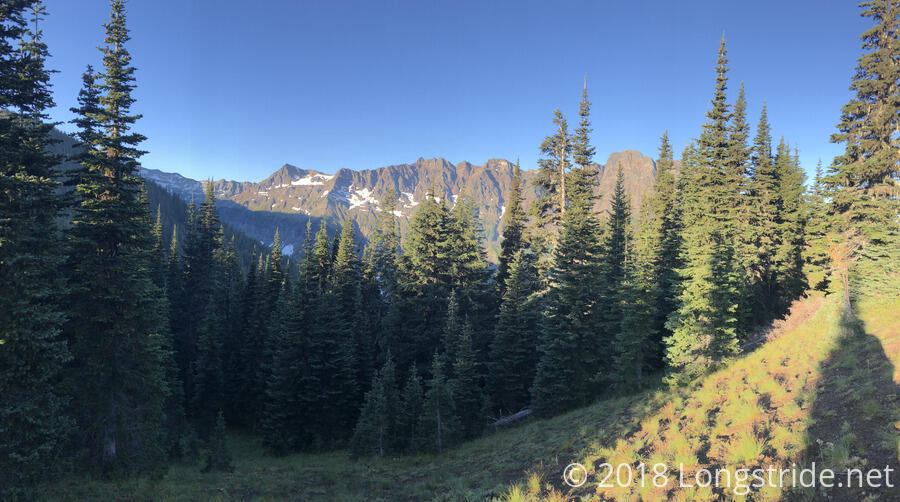 From my campsite, the trail continued uphill, occasionally steeply, climbing along a ridge. With views to the east, the Miriam and Clear Fork fires became easily visible, and smoke from the fires formed a sort of bathtub ring around the sky. 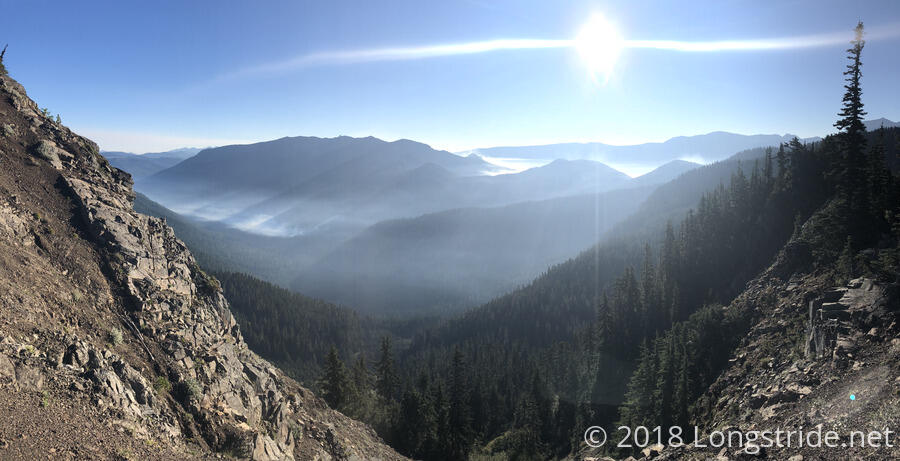 The Clear Fork and Miriam fires smoke up the sky.

There was quite a bit of up and down this morning, but on the whole, it wasn’t a bad section of trail to hike. The views more than made up for the trail being a little more difficult than the PCT itself likely would have been.

As the detour continued to climb and move around the mountains, I also got my first views of Mount Rainier.

After winding around the side of the mountain for a while longer, going over some rough and rocky trail, the trail passed Lost Lake, after which I took a short break. (Seriously, though, Lost Lake seems to be a quite popular name; how have they lost so many lakes?!) After passing the lake, I took a break and got some water at a small creek that crossed the trail.Break 1020 6.2

Still before noon, the sun had not yet had time to cook of all the fog, so the trail was fairly humid. It was also somewhat steep throughout the whole day, and easily had far more elevation change than the PCT would have in this section.

Near the top of a ridge, the detour switched to the Clear Lost Trail #76, and after climbing to the top of a saddle, turned east towards US 12.

After reaching the high point of the detour today, a wide open mountain ridge with views to Mount Rainier and the whole surrounding area, I was pleasantly surprised to find I had cell service, and called the Hotel Packwood to reserve a room for tonight.

The trail quickly dropped back into the forest and headed towards the Clear Fork Trail #61, the last part of the fire detour on the way to the highway into town.

About a mile before the road, the trail crossed the Clear Fork Cowlitz River. The river wasn’t particularly wide, fast-moving, or deep, but there wasn’t a dry crossing. I swapped my boots for my Crocs and forded the river (which was pretty cold). While I was drying my feet on the other side and putting my boots back on, another group of hikers arrived on the south side. One of them saw a fallen tree that crossed the river, several feet above the water, and decided to climb up and cross on it.

I had seen the tree, but rejected crossing on it because it was too far off the ground. I suspected this hiker’s crossing attempt would not end well, and those of us there watching were treated to a most epic and perfectly cartoonish fall: he slipped, lost his balance, and fell straight down, straddling the log, then slowly rotated to the side, first hanging upside down, and then finally dropping into the river.

He emerged from the river wet, but uninjured, but the same likely can’t be said for the camera he had clipped to his pack strap, which was fully immersed in the water.

From the river to the road, the trail was pretty steep, but it was only about a mile. I reached US 12 a little after 2:30 to find trail magic at the trailhead. The mother of another hiker was there with fresh fruit — blackberries, raspberries, and apples — as well as apple cider and bread.

The trailhead, along the curve on the road, was sort of in the middle of nowhere, on the (high-speed) road between Packwood and White Pass. It seemed relatively easy to get a ride to White Pass (where most hikers were going, to continue along the PCT, which reopens at the pass going north), but the safer place to stand was on the side of the road not going to Packwood.

After one false start getting a ride to Packwood (the pickup truck I almost got in was going up to White Pass, rather than into Packwood), I got picked up by a guy named Doug around 3, who drove all the way out to the trailhead just to see if anyone needed a ride into town.

My first stop in town was the Post Office, where I picked up my bounce box and mailed back the keys to the Seneca Model I found the other day. A short walk down the street brought me to Hotel Packwood, and I was able to quickly check in and get into my room. It was a very good idea to call earlier for a reservation: the hiker who got there just before I did got the last room. Packwood, it turns out, has a twice-yearly flea market, around Memorial Day and Labor Day weekends, and while it was “only” Tuesday, vendors were already starting to arrive and set up, and the available lodging in Packwood was pretty limited.

After a shower, my plan was to go for dinner at the nearby pizza place. That plan was delayed for a bit when I realized I locked my room key in my room and had to get the owner to give me a second copy of the key so I could get in and get it. (This took longer than either of us expected: she didn’t often have to get the backup keys, and the room numbers painted on them had faded to the point that it was hard to tell which key went to which room.)

Because of the delay, I happened to leave the hotel as Free, Stargazer, Soups, and Bumblebee were standing outside, having just arrived from the trailhead after getting a ride from a trail angel, Mamma G. The hotel was full, and the RV park next door was no longer accepting PCT hikers due to an incident involving people who claimed to be hikers but probably weren’t.

Mamma G, who had hosted so many hikers in her backyard last year that the neighborhood association voted to limit the number of days per year people could tent on a property, offered for the four of them to camp at her place tonight, and because of the flea market limiting the available space in Packwood, told the owner of Hotel Packwood that she’d be able to host any overflow hikers that couldn’t get rooms for the duration of the flea market.

The five of us went to the pizza place while Mamma G ran some errands. (The pizza was fantastic!) Afterwards, I went to the food store next door and picked up food for the next leg of my hike to Snoqualmie Pass, about 100 miles up the trail.