It was cool and humid overnight, and foggy this morning, but a persistent light wind during most of the night kept the condensation from building up on the inside of my tent. Not surprisingly, with the cool weather and fog, I was slow to get started, not getting back on the trail until almost 8:30. 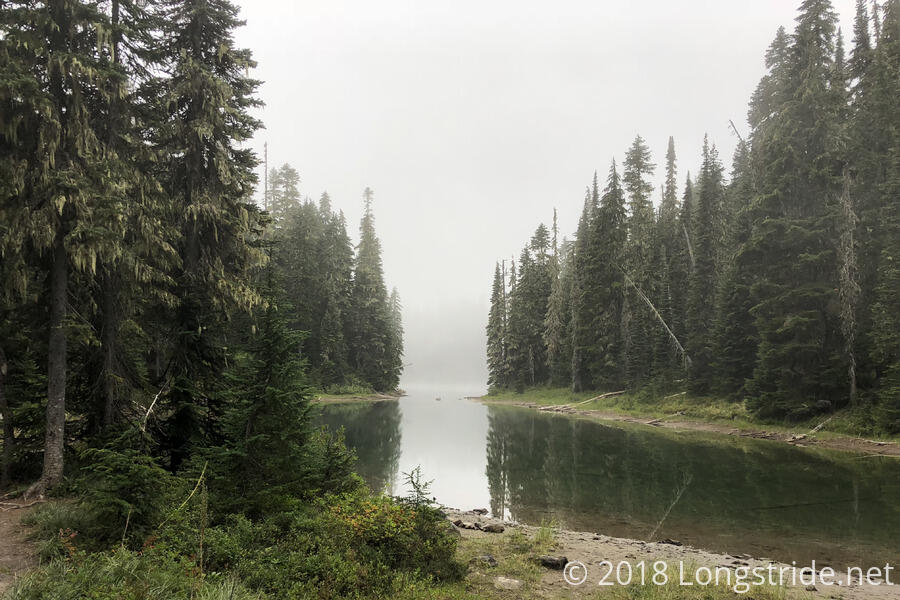 Pipe Lake in the Morning Fog

The trail started off with a gradual downhill through the forest, and by the time I made it a short distance past Pipe Lake, I dropped below the fog. The clouds were still low, and it was still humid, but at least I wasn’t walking through the clouds.

After almost seven miles of nice trail, I reached the Bumping River, which I had to cross. While crossing the river took some planning, as the water level was above some of the rocks that would have made it trivial to cross, it wasn’t that difficult, involving a few stepping stones, scrambling around a large rock, and then finishing the crossing over a waterlogged log. 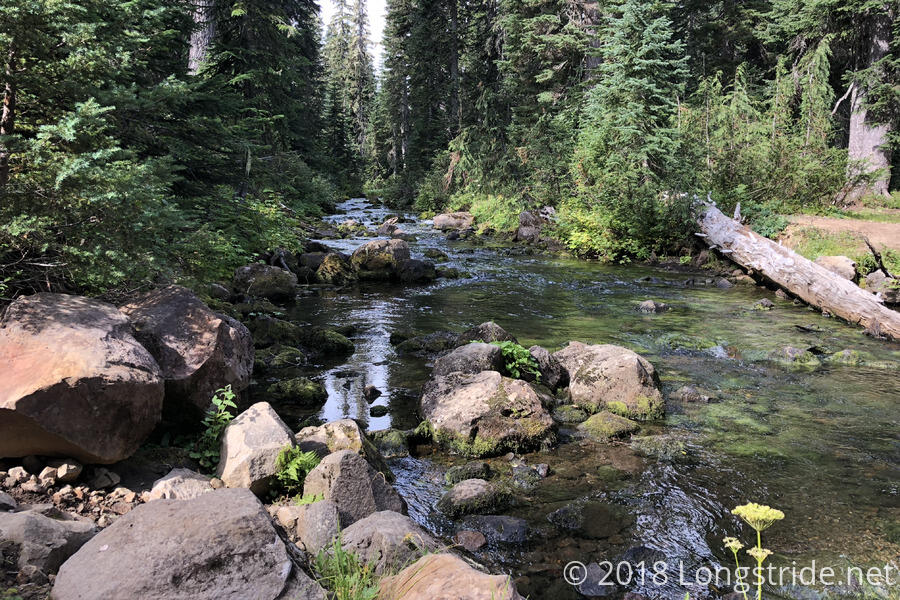 I took a break there, starting uphill just as a light drizzle began to fall, turning to a light rain as I climbed higher up the hill. It was somewhat steep, but fortunately, nowhere near as steep as the detour was yesterday. As I climbed, the clouds started to lift a little, but quickly came back.

For much of the afternoon, there was some measure of clouds and light rain, though as the afternoon progressed, the rain eventually stopped and the clouds slowly started to lift.

After a four-mile climb, I entered Mount Rainier National Park, and the trail flattened out a bit, with a few short ups and downs. The mid-afternoon was still mostly cloudy, but the sun came out a little and there were some nice views.

After one last downhill, the trail brought me to Dewey Lake, a good-sized lake with quite a few campsites along its perimeter.

I stopped for the day at a campsite near one of the lake’s inlets. Two section hikers, out for a few days between White Pass and Chinook Pass (a roughly 30 mile section). It was somewhat amusing to learn that they had left from Pipe Lake yesterday, and that I’d hiked in one day what it took them two days to do — and they were a day ahead of their original schedule.

Quite considerately, one of the hikers offered me a pair of earplugs — he said he can occasionally snore quite loudly. I declined, since (for better or worse) I rarely hear anything once I fall asleep.

Chinook Pass, about three miles ahead, is along Highway 410 and has a trailhead with toilets and trash cans, so I’m looking forward to that short detour tomorrow morning.

Although part of the day being in Mount Rainier National Park, I was a bit disappointed that there were no views today of Mount Rainier, likely because of the rain clouds. I had some good views yesterday, though, and if the clouds lift, I’ll probably get more good views in the days ahead, given how big Rainier is.

I tried to get to sleep early, with the hope I’d be able to get up and start hiking earlier tomorrow than I have been lately. I guess we’ll find out tomorrow if I was successful.

Pacific Crest Trail, 2018
« (Day 162: A Steep Detour Back to the Trail) Previous Entry
Next Entry (Day 164: The Clouds Flow Through Mountain Valleys) »