Six months ago, I left Campo, California, and began my second epic-length adventure. Slowly but surely, I hiked my way through the Southern California desert, the snow-covered mountains of the High Sierra, the lava fields of Oregon, and the forests of Washington. Through dirt and snow, river and forest, smoke and fire, heat and cold, I made my way ever further north along the mountain wilderness of the Pacific Crest Trail. Today, finally, that adventure comes to its end.

It was cold and windy overnight, and still cold in the morning, but we actually managed to get up before sunrise, and were reasonably efficient in breaking camp. I decided that I wanted to make it to the terminus before 9:48 am, which is the time I left the southern terminus. Finishing before then would mean the hike took just under 183 days, rather than 183 days plus a bit.

CareFree thought there may have been snow overnight, but once I finally poked my head outside, it didn’t appear that was the case. Or, if it had snowed, it quickly melted, since the ground was a bit damp.

Our three-day forecast of good weather seemed fairly accurate. We got three days of good weather, but this morning, the sky was overcast, and it didn’t feel like it was going to be just morning fog. The ground was wet, and there was plenty of humidity in the air. I put on my pack cover and rain jacket just in case.

We left Hopkins Lake, our last campsite of the trail, around 7:30, hiking over Hopkins Pass, and continuing across the face of Blizzard Peak, heading downhill towards Canada. The morning views were nice, but the low clouds covered the summits of most nearby mountains. Eventually, we descended below the treeline, though occasional breaks in the forest provided some small views. Around 8:30, we hiked through Castle Pass, ending our brief overlap with the Pacific Northwest Trail. 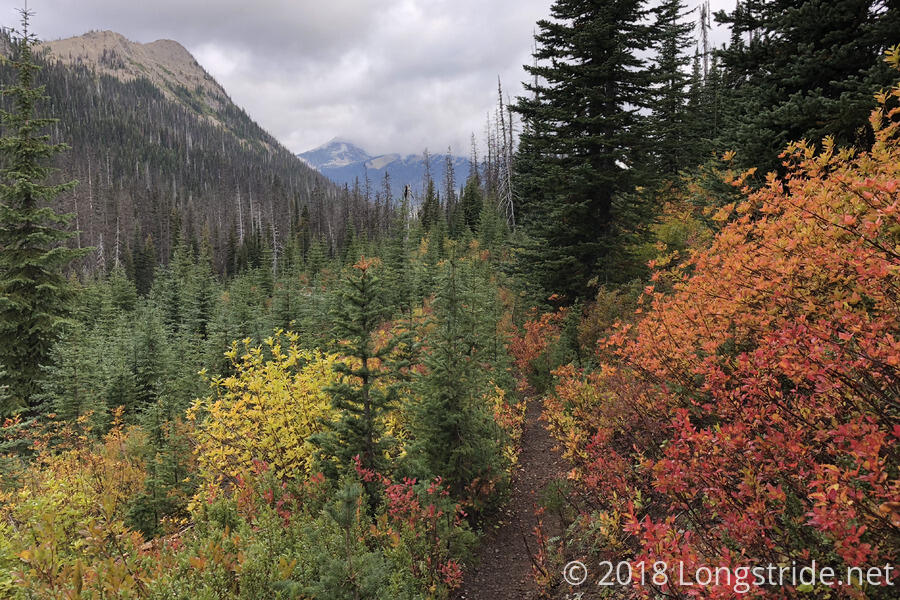 Fall colors continue to expand. In the distance, the summit of Canada’s Mount Frosty is obscured by clouds.

As we got closer to the border, parts of the trail became more overgrown. Fortunately, it wasn’t raining, and there wasn’t that much moisture on the plants that transferred onto my pants, but it seemed almost fitting that Washington would end with overgrowth; there’d certainly been enough of it so far. 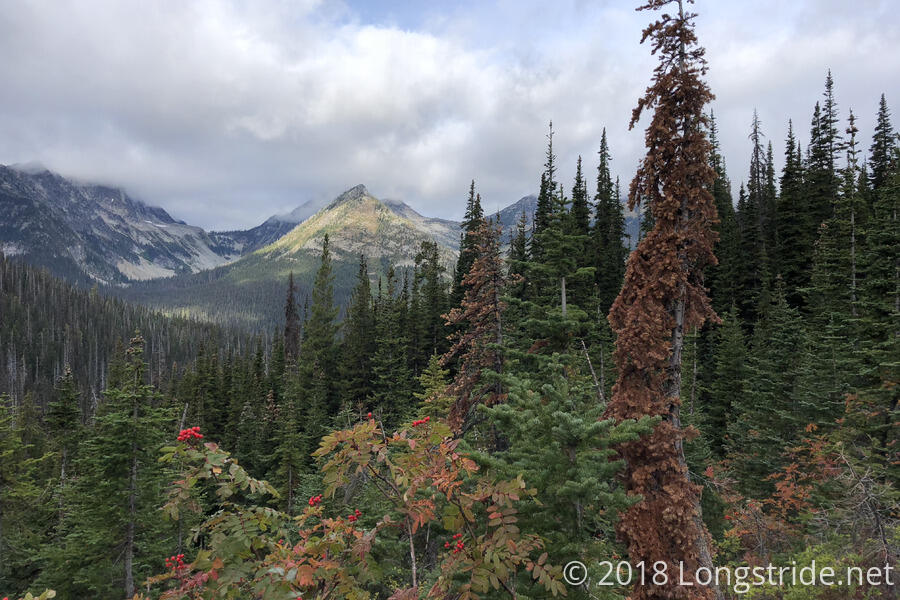 With the relatively easy downhill terrain, we were making good time. Once we reached the one mile marker — “1 mi. TO GO” written in small stones — I knew we’d make it to the terminus before my self-imposed deadline. Along the way, we passed by a few hikers already returning from tagging the terminus. At a small waterfall just after the one mile marker, we passed half a dozen hikers waiting for the rest of their group to catch up, so they could all reach the terminus together.

At 9:31 am, I entered the clearing at the Northern Terminus of the Pacific Crest Trail, 182 days, 23 hours, and 43 minutes after I left the Southern Terminus near Campo, CA. This was just 17 minutes shy of being a full six months on-trail. Not counting detours, this was 2652.6 miles, which now more than doubles my total distance on long-distance hikes: the PCT is roughly 200 miles longer than the Appalachian and Long Trails combined. 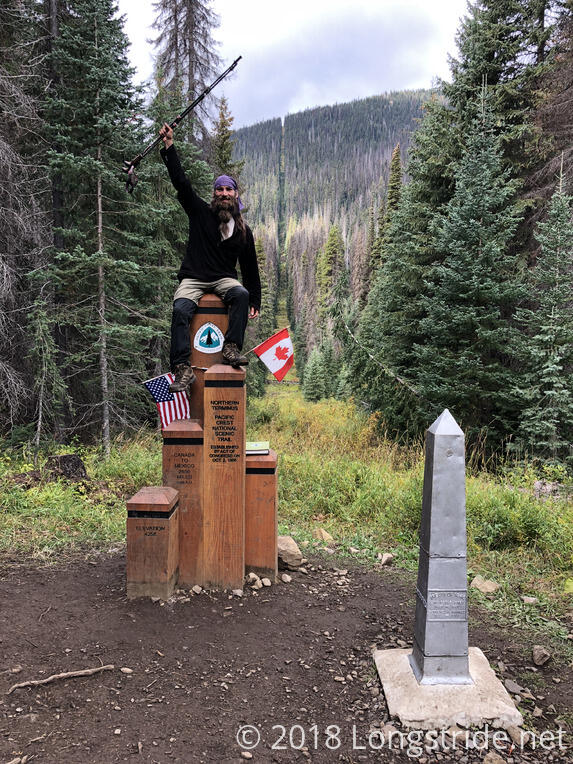 Success! — The Northern Terminus of the Pacific Crest Trail, in the border clearing between the United States and Canada. Visible are the PCT Monument, and Border Monument 78.

The US - Canada border features a roughly 20 foot wide clearing in the forest, with monuments placed along its length, to make clear where the border is. The northern terminus of the PCT is situated in the border clearing (cleared a bit more than the rest of the border), and features a PCT monument — recently replaced — with an American and Canadian flag wedged in between two posts, as well as Monument 78, marking the border. This is the second boundary monument I’ve seen: the other is Monument 592 at the northern terminus of the Long Trail in Vermont.

CareFree and I celebrated at the border for about 45 minutes with about another dozen hikers who had completed their journeys. We shared a can of “Nice Day” IPA and a bar of dark chocolate with chilies and cherries. Other hikers brought champagne bottles.

The time came, however, for us to part. From the outset, the end of my hike was to be in Manning Park, BC., another eight miles north from the terminus. CareFree, however, had to turn back, since we’ve had no chance to receive word of her entry permit application. And so, with one last hug — for now — we parted company for the first meaningful length of time since we met 20 days earlier, hiking away in opposite directions. CareFree began her 30+ mile hike back to Harts Pass; I continued north, into Canada.

After a brief downhill to cross a creek, the trail, now in the EC Manning Provincial Park, climbing along the shoulder of Frosty Mountain. There were occasional views to the southeast, but the trail was mostly under tree cover. In a saddle between Frosty Mountain and Windy Joe Mountain, the trail passed a large campsite for hikers heading to or from the PCT (complete with a pit toilet and bear box), and also a trail junction leading to the summit of Frosty Mountain.

Since the PCT itself never summits mountains (and the northern terminus itself is in a bit of a valley), my original plan (before I started the trail) was to take the Mount Frosty Trail to the summit, so that I could summit a mountain (particularly, one in Canada) before finishing. However, from the junction, it’s a four mile hike to Mount Frosty, which would likely add another three or four hours of hiking to the day, and with a deadline on reaching the Manning Park resort for my ride to Seattle, I couldn’t afford the time to summit a mountain today. 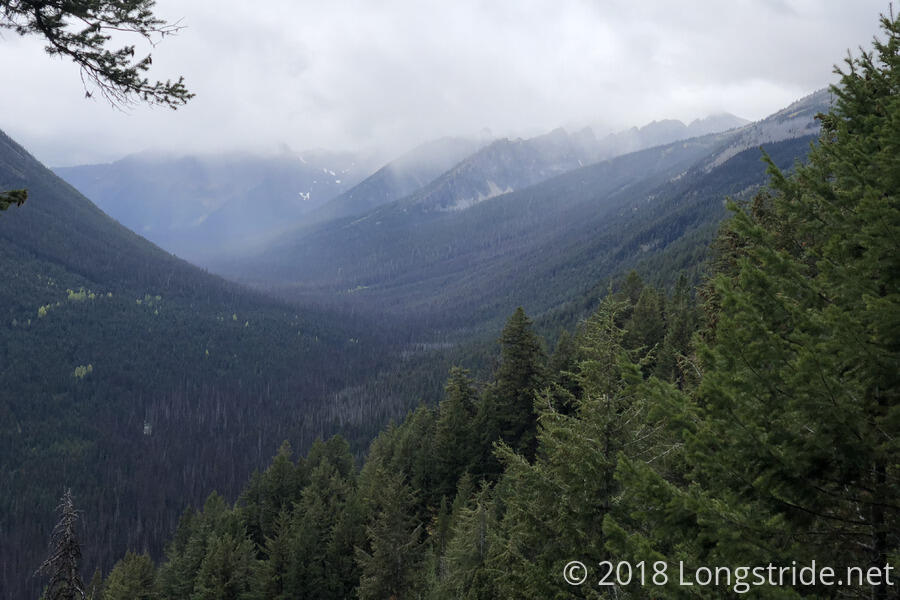 Clouds drift in, a harbinger of rain to come later in the day.

Shortly after passing the Mount Frosty trail junction, the trail joined the Windy Joe Trail, a dirt road. To the south, the road leads to the summit of Windy Joe Mountain (which, in retrospect, I probably would have had time to summit, since it is only a mile off-trail, but I didn’t want to keep my ride waiting). Instead, I followed the road northwest, and slightly steeply downhill, as it brought me out of the mountains and towards the trailhead. Briefly, a light drizzle fell, and I passed a few small groups of hikers heading up to the PCT terminus to meet people. One last trail junction turned east, paralleling a creek and heading through a very well-signed area, until reaching a trailhead at Gibson Pass Road.

Not wanting to end my hike with a roadwalk, I followed a trail just off of the road for about half a mile, until it dead-ended at a closed gate for some sort of campground. Not wanting to barge through what seemed like private property, I cut through the woods along the camground’s fence until I came out onto the road, which I followed to the entrance of the Manning Park Resort, arriving there at 1:06 pm, reaching the end of my hike after 2,161.4 miles.

As I entered the resort’s parking lot, a car stopped next to me — four hikers heading back to the U.S., including Villain (whom I met in Stehekin). Already having a ride (in a less crowded car), I declined their offer to join them, and set out looking for Phoenix, and her husband, Greg. My first guess was to try the restaurant, though I didn’t see them there, so I went to the resort’s front desk and borrowed their phone to call Greg (whose number Phoenix gave me). A quick call revealed that they were indeed in the restaurant, I must have just not seen them. When I returned, it was clear why: Phoenix had taken her hair braids out and let her hair down; she didn’t look like a hiker anymore.

I joined them at their table — they had just finished eating — and ordered a burger of my own, chatting with them for a short while, until they left to go get a shower. Meanwhile, I had to send my cheeseburger (ordered without mayo) back twice! The first two times the waitress brought it out, the kitchen had put mayo on it. Apparently, in Canadian kitchens, “No Mayo” means something different. The kitchen finally got it right on the third try, and while that was disappointing, it was an excellent burger.

The Manning Park Resort is generous enough to provide hikers with access to the pool area, which has showers in the changing rooms. If I had more time, I think I would have taken some time to relax in the hot tub. But, Phoenix and Greg had just finished their shower as I entered the pool building, and I wasn’t going to keep them waiting. I took as quick a shower as I could, and headed back out to the parking lot to find their car.

Fortunately, it didn’t take long to find their car, since a light rain started while I was in the shower. I quickly stuffed my pack into the back seat, and by 3 pm, we left, beginning our drive back to the US. The rain picked up considerably during part of our drive (some of which I missed while I took a short nap), but it was still a scenic ride. I imagined that CareFree was not having an awesome hike back to Harts Pass, but I likely wouldn’t hear anything from her until tomorrow or the day after. Our plan is to meet up in Seattle in a few days, once she’s had a chance to work her way there.

The rain cleared up as we neared the border, and we re-entered the US a little before 5, after what appeared to be the most bored border control officer ever inspected our passports. We made a brief stop at Taco Time in Bellingham for dinner (and to stretch our legs — this was easily the longest time I’ve been in a car non-stop in more than six months), on our way to Seattle.

My intended destination for the evening was my cousin’s house in Auburn. There were a number of possible ways to get there, but Greg went above and beyond the call of duty. After dropping Phoenix off at an Air B&B to meet up with friends from the trail, he drove me (at least) an hour out of the way to my cousin’s house.

For the next few days, I’ll relax with my cousin’s family, and then return to Seattle to spend a few days with CareFree before I return home to the east coast.

The last six months have been a long, amazing hike, through a beautiful part of the country, and meeting with other amazing people. With all endings, come new beginnings: there are still more trails to hike, more places to see, and more people to meet. For now, though, it’s time to rest.:main

Pacific Crest Trail, 2018
« (Day 183: “Bridge Under Construction. Not Open For Use.”) Previous Entry
Next Entry (The Mountains Were Calling, And I Was There) »