A twenty-mile day, some scenic, and some not, saw us several “lasts” on the trail as we approach Canada: the last road crossing, the last fire closure, and the last wilderness area

CareFree and I had a plan to go something like 23 miles today to what we hoped would be a good campsite in the middle of the Holman Fire detour, so we had an alarm set for 5:30. However, it was quite cold this morning, and we didn’t budge from our sleeping bags until closer to 6:30.

Happily, there was again no rain overnight, or during the day today. In Mazama, we were promised three days of good weather, and today, the forecast continued to deliver. As with yesterday, the sun was out all day, brightly shining on the mountains. It started a bit cool in the morning, and gradually warmed as the sun rose higher in the sky.

We left our campsite at Brush Creek around 8, much later than we intended, and began a 2500 ft climb over the next five miles, first by following Brush Creek up its valley, and then turning away from the creek, following a long series of switchbacks to and through Glacier Pass as the trail climbed the mountainside. The campsite at Glacier Pass was empty, though this was not surprising, given how late we started today.

The switchbacks after Glacier Pass gradually brought us above the treeline. To the north, we could see a cloud covering the valley. Fortunately, we were climbing faster than the cloud was, and were far enough away that we weren’t at risk of the cloud overtaking us. 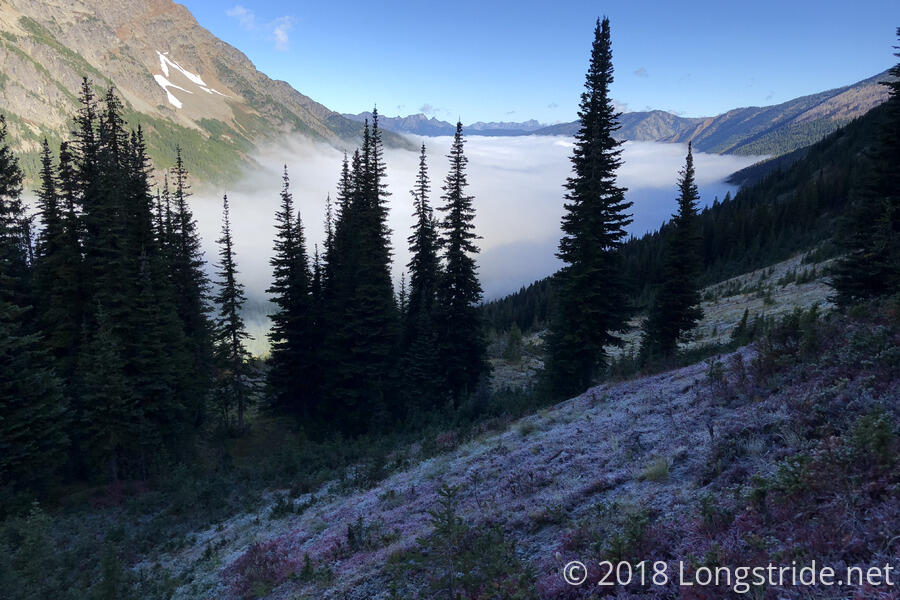 Valley Fog — A fog cloud settles in a valley.

Out of the forest, and still in the shade — the sun was still behind the mountains — it was still cold enough that some of the plants next to the trail still had frost on them. 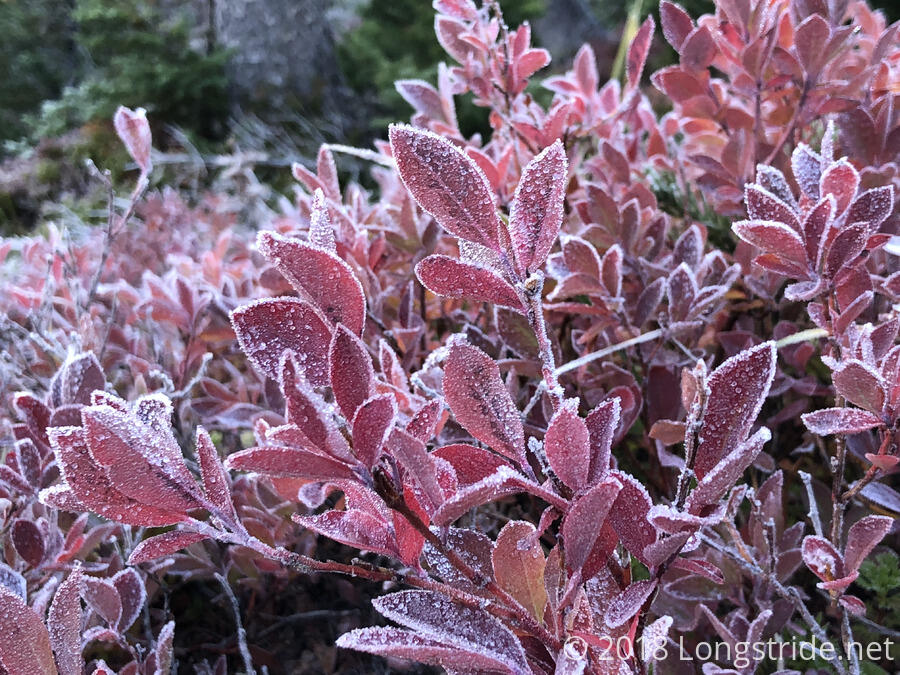 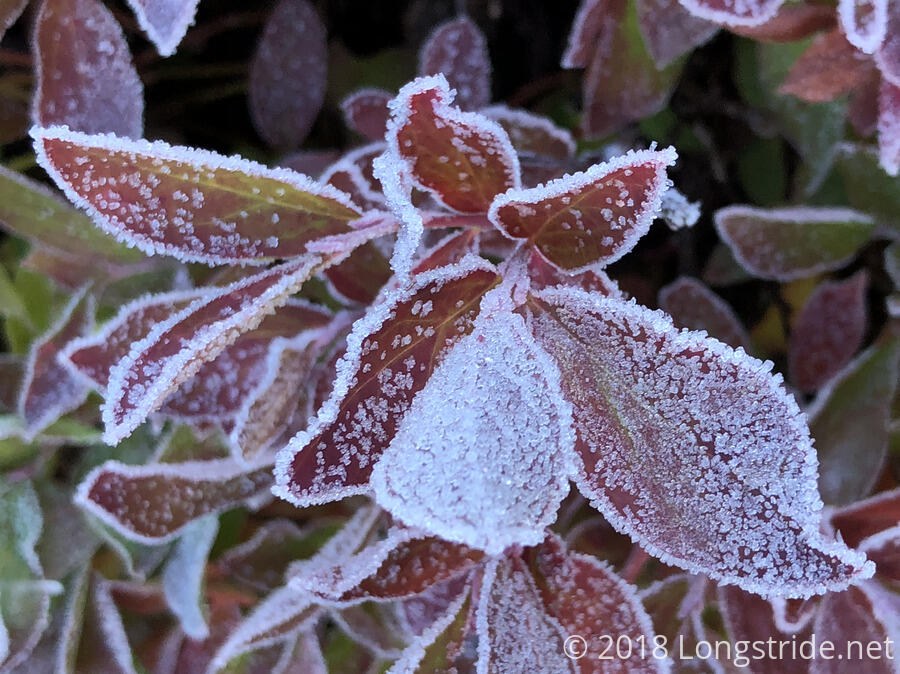 There were some nice views of both sides of the mountain from the ridge, though we only stayed on the ridge for about half a mile before dropping down a little, following the east side of the mountain.

We stopped to take a break after almost seven miles, in a slightly muddy campsite. CareFree found some dry spots to put out her sleeping bag and rainfly to try and dry them out a little — the rainfly picks up condensation from the air, and her sleeping bag picks up condensation from our breaths that collects on the tent’s roof, which her feet press against at night. They weren’t that wet, but even if they only dry out a little, it’s worth the effort to have (more) dry stuff. (With good weather forecast, we probably didn’t have to drape her rainfly over my tent, but we didn’t want to take chances, and I do think it does help keep it a tiny bit warmer inside.)

We continued on, following the mountainside and taking in the views, occasionally from two sides of the mountain when the trail occasionally followed the ridge. At times, we could see Harts Pass and cars on the road from a few miles away. 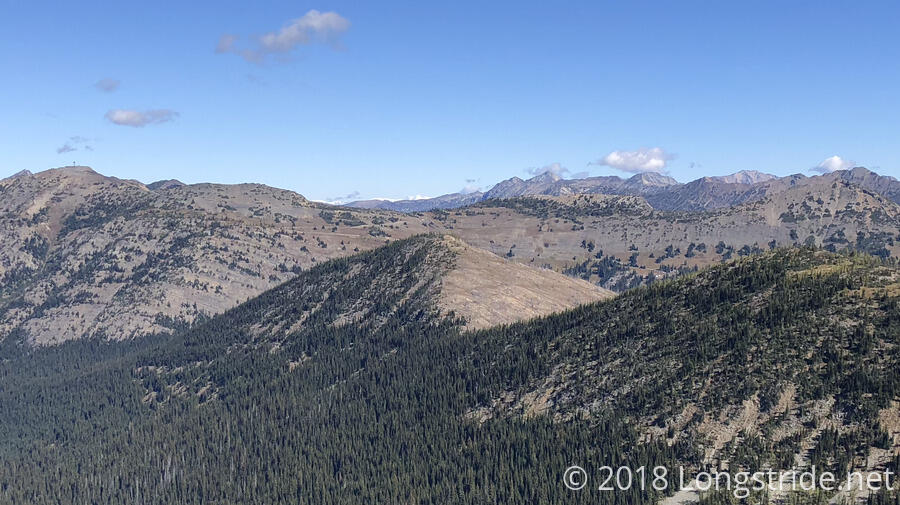 View of Harts Pass — Zooming in on the previous picture, Harts Pass is visible, as is the road that leads to Slate Peak and the fire tower on Slate Peak. The Holman Fire Detour goes over Slate Pass, which is also visible.

A bit after 1, we arrived at Harts Pass, the last road crossing on the trail. Easily, a dozen other hikers were there, as was a trail angel who had a small assortment of snack bars, plums, and a trash bag.

After a nearly hour-long break at Harts Pass, we began the Holman Fire Detour, embarking on a westerly detour down a different mountain valley, which will (after a few extra miles) reconnect us to the PCT tomorrow, just south of Woody Pass. Just before leaving, at a trail register near a ranger station at the pass, I signed a trail register with the comment “Canada or Bust!”. Here, there are only two choices: hike to the border and continue on to Manning Park; or return to Harts Pass. Strictly speaking, I’m not committed to anything, since (even after giving away a lot of food yesterday) I have more than enough food to make it to the border and back. It’s “only” about 35 miles to the terminus from Harts Pass, and I have no plans to return.

From Harts Pass, the trail detour briefly followed a forest road heading towards Slate Peak, then branched off on a “shortcut” trail that climbed straight up to a parking area on the side of the road, bypassing a switchback. At that trailhead, we filled out (free) camping permits for the Pasayten Wilderness, and finished the short climb over Slate Pass, entering the Pasayten Wilderness. Now on the Buckskin Ridge Trail, we began a downhill hike that lasted for the rest of the day.

Shaded from the sun, the trail along the northeast side of Slate Peak was lined with a thin dusting of snow, though that didn’t last long, and any hint of snow (and good views) disappeared once the trail dropped out of a scree field and into the forest. Once in the forest, the views all but disappeared, and while it was a relatively easy hike, the afternoon was not without its annoyances.

Shortly into the forest, at a trail junction, a trail detour sign directed us in a different direction than either the detour description or maps on the PCTA’s website. This gave us some consternation, but we opted to follow the detour sign, figuring that if someone had taken the time to place signs, they were probably accurate. It wasn’t too long before our trust in the detour sign was validated: I saw Calamity (whom I last saw in Cascade Locks at Trail Days, I think) on her way back from tagging the terminus.

Over the next few hours, we saw quite a few PCT hikers on a “victory lap” of sorts, returning from the terminus. This helped infuse CareFree and I with a new sense of excitement as we made our way ever closer to the end of our journey.

The trail we joined followed the next valley over from the fire, taking us to the northeast (rather than the northwest) and while it was an easy hike, it was also incredibly boring, going through a green tunnel without much in the way of interesting sights. This side-trail was also apparently quite popular for equestrians. There was an almost unfathomable amount of horse droppings along the trail, especially as the trail dropped closer to the valley floor, and it seemed like almost every other step had to avoid poop on the trail. Given all the horse poop, I was surprised that we only saw three horseback riders today.

Six miles from Harts Pass, around 4:30, we stopped next to the trail for a short break. Tired, and with only about two and a half hours until sunset, and not entirely sure where we were relative to the limited information we had on campsite locations, we tried to pick out a reasonable place to stop for the evening, and we guessed we’d stop at a campsite just before a creek about five miles ahead. Phoenix also passed us while we were resting; we’d leapfrogged with her a few times over the course of the day. Given she wants to make it to the border (and two miles past) tomorrow while there’s still sunlight, she needed to go further past where CareFree and I decided on, so it seems unlikely I'll see her again until I get to Manning Park.

We trudged on through the forest, continuing to avoid horse droppings, as we rushed to the campsite near a creek that we wanted to stop at. We got there around 6:30, about half an hour before sunset, pretty tired. At roughly nine miles into the fire detour, that put us at almost 22 miles for the day, a little short of where we were aiming this morning. Unfortunately, the three decent tentsites there were taken, though we found an incredibly barely workable spot a little downhill from the main camping area. CareFree checked the other side of the creek while getting water, but there weren’t any better spots. This easily was the worst campsite I’ve had on the trail; it wasn’t even close to flat or level, and I doubted I’d sleep well at all.

Tomorrow: A shorter day than today, out of the closure and back on to the trail, heading for Hopkins Lake, said to be the best campsite before Canada, hopefully with some good views on my last full day in Washington.