Today was my last day on the Appalachian Trail as part of my Tuscarora-Appalachian Trail loop. It seemed like it was going to be a race against the weather, as the wind, and clouds gradually picked up.

I was up at sunrise and gone from Rocky Run by 8 am, bidding farewell to Cody and Rita as I headed out for my last day on the trail, hoping to beat the weather as I headed south towards Harpers Ferry.

About 45 minutes into the day, I came across a side trail to the top of Lambs Knoll, which my guide described as having a comms tower and a view. Being only a short distance off-trail, I opted to check it out, though I wasn’t expecting much given the clouds. There certainly was a radio tower there, but after following the road in behind the tower to its end, I didn’t see anything in terms of a view, and I didn’t want to blindly follow the road in in the other direction “just in case”.

A few minutes later, though, brought me to White Rock Cliff, which did have a view. 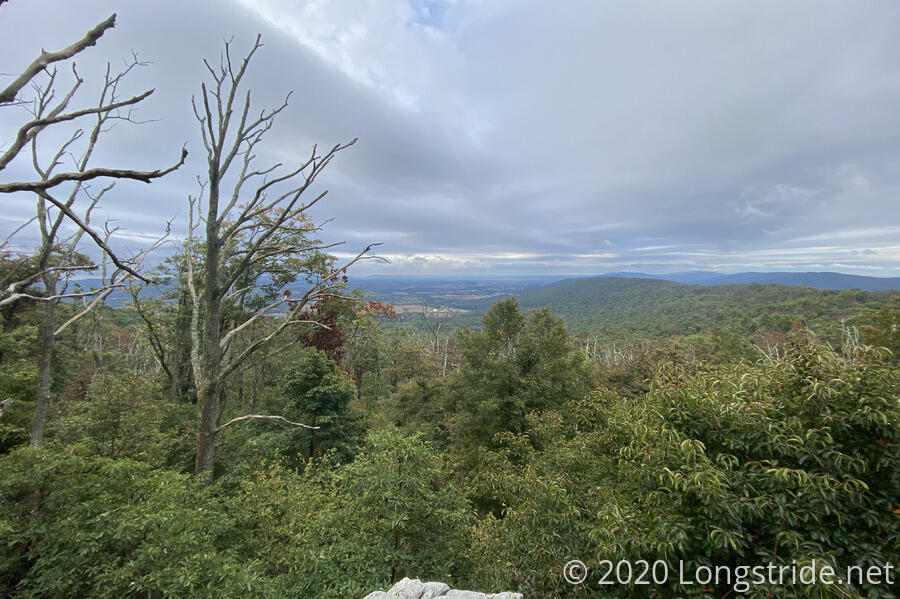 With the weather forecast calling for rain starting at 2 pm, I spent most of the day trying to hike as quickly as possible so I could finish without being soaked during the car ride home. So I was more focused on hiking fast, than paying much attention to my surroundings. A nice breeze that had been blowing most of the morning helped keep me cool, making it easier to go further without needing to stop for breaks. I’d originally been planning on stopping at Gathland State Park (which had picnic tables and water), but instead kept going, not stopping until I reached the trail to the Ed Garvey Shelter, southernmost shelter in Maryland, and stopped at the trail split for a break, nine miles from Rocky Run and more than halfway through the day.

Now on a time crunch (having sent my mom a pickup time that precluded further breaks or detours for views), I skipped the side trail to the Weverton Cliffs, and began the only slow part of the day, the steep and somewhat rocky downhill at the south end of South Mountain (which the AT follows its entire journey through Maryland).

After dropping off the mountain, the trail quickly brought me back to the C&O Canal Towpath, which I followed for three miles back to Harpers Ferry. As I mentioned before, the towpath is essentially the flattest section of trail, which, when covered with trees, makes it one of the most boring, but boring was fine for me right now, since I was in a hurry. The wind was picking up, and when I could see clouds, they looked increasingly dark. 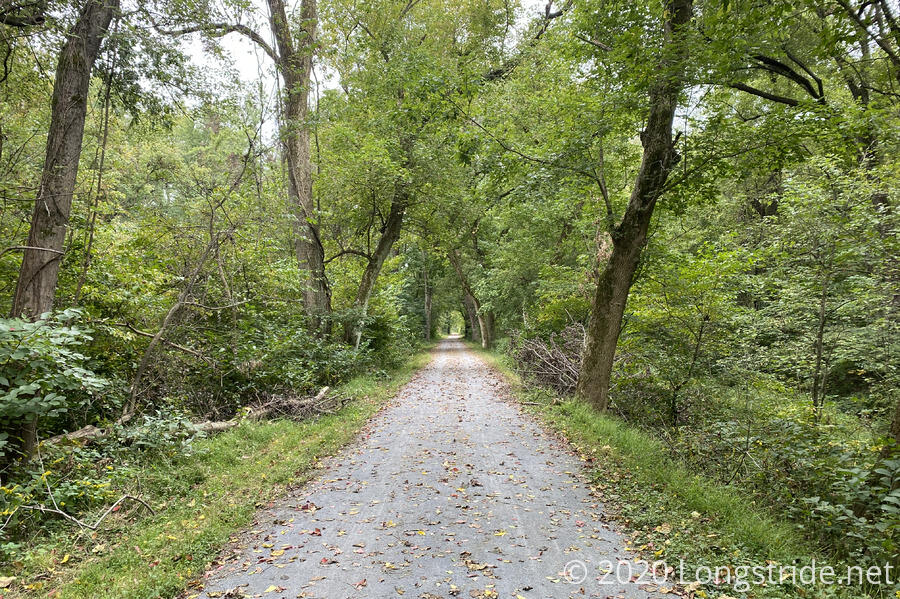 I did, though, take a short detour to the edge of the Potomac River. In the distance, I was able to see a heron sitting on a rock, looking for fish. 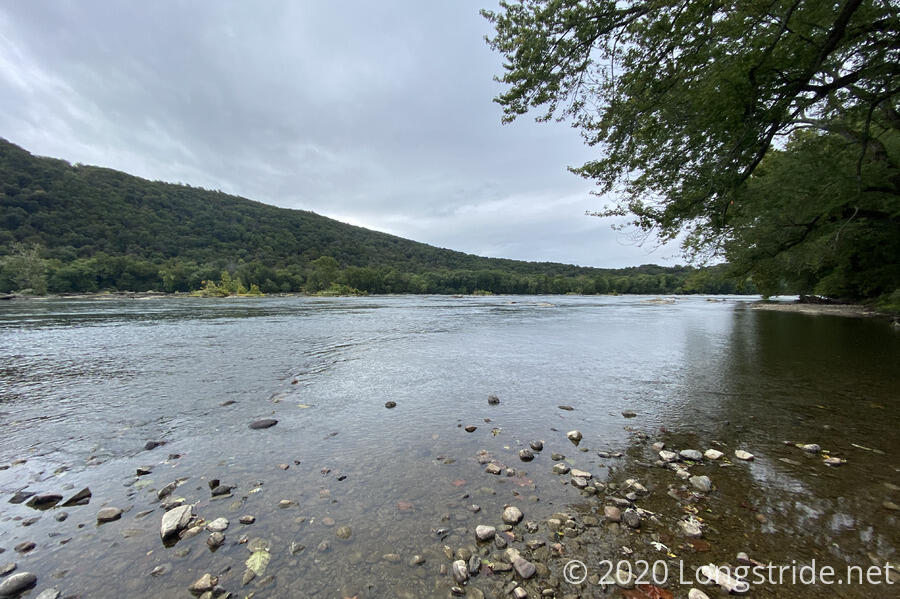 The rest of the C&O Canal Towpath was quite uneventful. I knew I was almost finished when I caught my first glimpse of Harpers Ferry through a gap in the trees: the top of a church steeple, with a backdrop of dark clouds. The clouds looked so much like rain that, while crossing the Potomac over a (recently reconstructed) footbridge, I completely forgot to stop and look at the confluence of the Potomac and Shenandoah rivers. Instead, I kept going, following the trail through lower Harpers Ferry (which was much steeper than I’d remembered it being), and then through the woods on the south side of the hill that makes up the upper city.

Finally, though, just before 2 pm, I reached the trail marker that that began my loop just over a month ago. I was done, and happy to be. 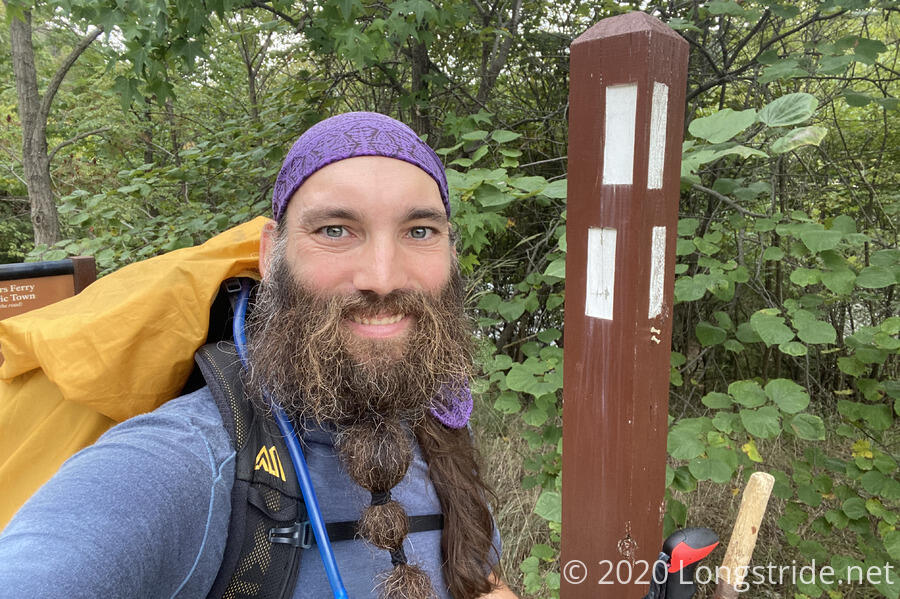 My mom showed up a couple of minutes later, and we were off, heading back home. We stopped at a McDonalds on the way; I initially thought I’d be fine without food until we got home, but as I was ordering food, I realized I’d been balanced right between too-tired-to-be-hungry and too-hungry-to-be-tired. Stopping for food put me over the edge, into must-eat-now territory.

As we headed east down the highway, the clouds behind us never quite caught up, and we made it home to bright sunlight, some amazing-looking clouds, and no rain.

Only later, after I’d gone to pick up pizza for dinner — I couldn’t get any yesterday, so I was going to have some today — did the rain start. But the rain didn’t matter now. This hike was over. In thirty-three days and four hundred and thirty miles, I’d done what I’d set out to do: hike a new trail, and revisit portions of an old one.

Now, it’s time to rest … until the next hike, wherever or whenever that might be.