Off to an early start this morning, Beast and I left the Laughing Heart hostel around 6:45, loaded up on breakfast at a diner in town, and headed off on our five day hike to Erwin, TN.

The great thing about going into trail towns is the downhill going into town, the resupply, and the large amount of food you can eat while in town. The bad thing about towns is that after you leave, you're lugging a heavy, fully-resupplied pack up the mountain on the other side of town. 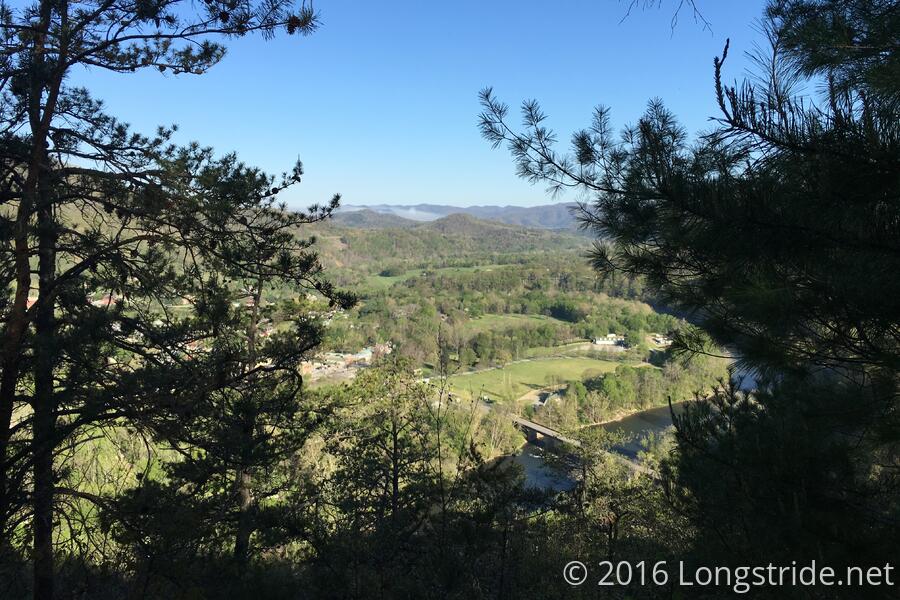 So I'll skip complaining further about the uphills, and skip on to the more interesting parts of the day.

About an hour and a half before reaching our intended destination, the Spring Mountain shelter, I took a side trail up to a fire tower (conveniently located adjacent to a cell tower), and got some cool photos of (what appear to be) smoke clouds from a fire a few mountains over, filling the valley there.

View from Rich Mountain Lookout Tower — The smoke in the distance is from the ”State Line Fire”.

Also before the shelter is the entrance to the Cherokee National Forest. Almost immediately after entering the forest was a sign for a prescribed burn area, covering March and April. Sometime recently, the forest west of the AT was burned for management. It was quite strange to see that the trail was the clear dividing line: burnt trees and leaves on the west; normal forest on the east.

The Spring Mountain shelter is an unfortunate, dilapidated, run-down, sad little shelter. Floorboards are half missing or rotted away, and mice run rampant inside the metal roof. It does have a power outlet, though. Fortunately, my ankle was doing much better, so we made the choice to push on, to Allen Gap at 14.8 miles. 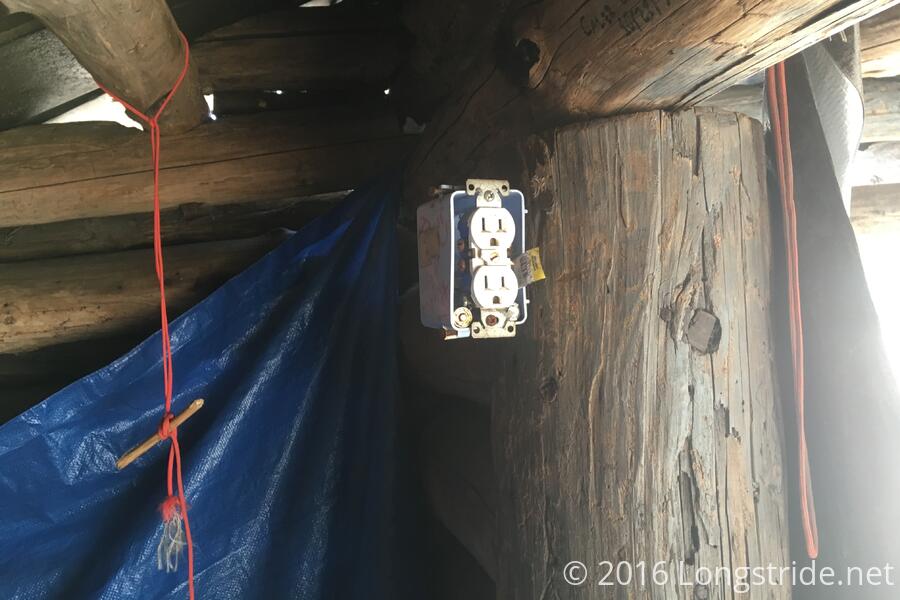 Power Outlet — One of the trail maintainers clearly had some fun. Unfortunately, this power outlet is not hooked up to anything.

The guidebook and resources we had disagreed as to the extent of water supply, but Beast remembered there being water there last year, and worst case, we could buy water from the store shortly up the road from the trail crossing, so we skipped gathering water at the source a mile or so before we got there, and made it to the gap around 3 pm.

Somewhat dismayed at the lack of actual running water at the gap, we found ourselves at Mom's, a run-down cash-only establishment with water, soda, beer, Powerade, candy bars, ice cream, microwave burgers, hotdogs, and more. It's proprietor, Duane, was happy to chat with us and the other hikers there, Chicken Feet, I Walk, Southpaw, and Superman, for over an hour as we relaxed on the chairs and couches inside the store.

Relieved to at least have water for dinner (as if we didn't eat enough at Mom's; I had a cheeseburger, chili hot dog, ice cream snickers, and a Powerade, soda, and a beer), Beast and I returned to our campsite adjacent to the road and set up our tents; everyone else continued hiking towards the next shelter, 5 miles up the trail.

While we were setting up, a hiker named Serenity came by and told us of her day: overnight, (apparently) day hikers stole all of her food from her bear bags, leaving the ripped shards of one of the bags re-raised off the ground. Already a good distance from Hot Springs, she had to head back into town to buy new food and new food bags. She was able to hitch into town, and was picked up by a 65-year-old hiker who took her back to town, and even told her at which hiker box she had left an old food bag she had just replaced. While she still had to re-buy a lot of food, Serenity was able to get the food bag and even some food from that hiker box.

Especially after Serenity's story, we were a little wary of leaving our food bags anywhere in plain sight near a road, so we strung up our food bags, hopefully a bit out of sight, on the trail back across the street.

While Beast and I were sitting on a log killing time, an old man, Jack, who lived about a mile down the road, came up walking his dog, a big white Labrador-Husky named Blaze. Familiar with hikers (and presumably the lack of good water nearby) he asked if we needed and water. We were surprised, but heartily agreed.

While he was there, a woman walked up from the other direction. A friend, and his dog, had not yet returned from their hike, and she wondered if we'd seen them. We had not, said we'd keep and eye out, and Beast even offered to go looking up the trail if she needed. Before that, though, she said she'd check to see if he'd come out "the other way".

Half an hour later, as we're discussing how bright the moon is, Jack returned with a sealed gallon jug of water, as well as a goodie bag with grapes, cookies, a bag of chips, and some crackers. We each claimed about a liter of water, and left the rest for another hiker staying at a campsite a quarter of a mile south on the trail, who, like us, was low on water with no resupply.

Later, as we're in our tents, the woman returned; her friend had gone back the way he came, after realizing his dog wouldn't be able to make it further up the trail they were on. She gave us more water, bananas, and other food (which while great, does pose the tiny problem that it all really should be bear-bagged; instead, we're just stuffing it into dry-sacks and hoping for the best).

The theme of the day seems to be: the trail provides. Never could we have anticipated the end of our day would turn out like this.

Tomorrow: readjusting our 15 mile day plans to push 18 tomorrow to allow us to get to Erwin after only a 6 mile hike into town on Friday.