We woke up late today, and had a great breakfast at The Barn, though this meant we didn't actually get on the trail until after 11 a.m.

The motel we stayed at has a cute covered bridge between its parking lot and the adjacent property (a gas station). It seemed relatively sturdy, except that on the other side is a piece of rotting plywood between the edge of the bridge and the ground, that could disintegrate and become a hazard very easily. 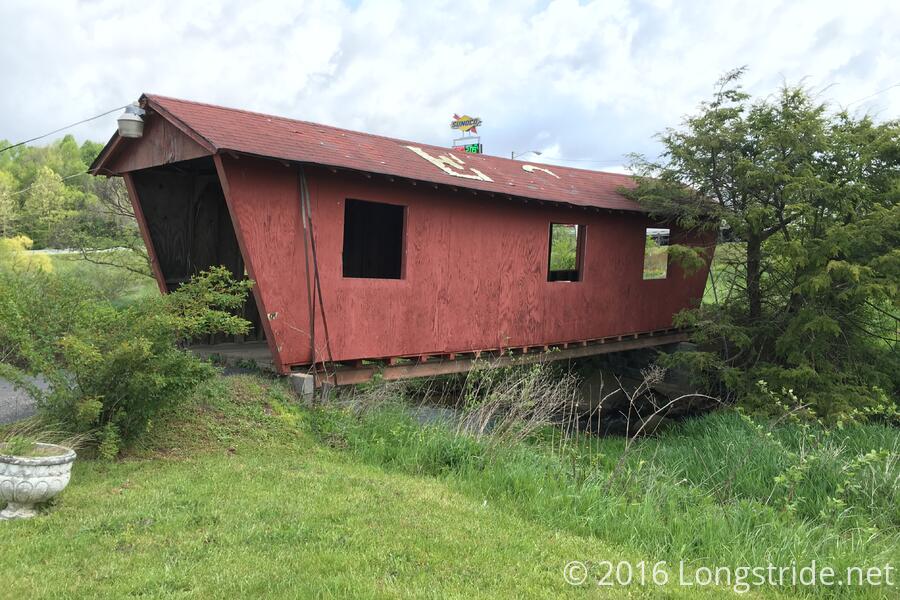 We took a road detour around the first part of the trail; there had been reports that a bridge over a creek on the trail was washed out or under water, making travel that way unsafe.

Rejoining the AT brought us to another open field, and the first of the day's many "staircases" over barbed wire fences at property boundaries or cattle pens. 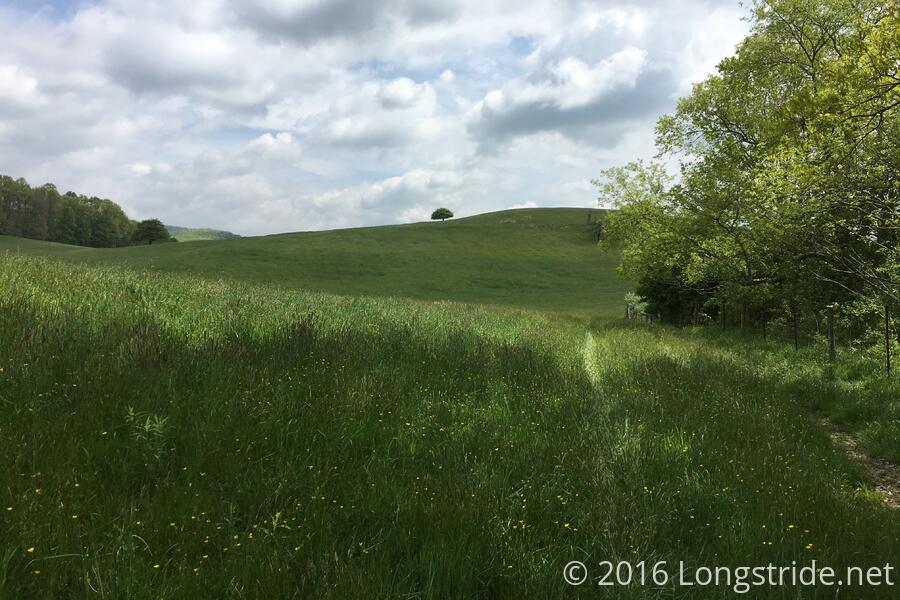 The weather today was largely wonderful. It was a little cool, but sunny and with a nice breeze most of the day.

The first part of today's hike was hard; it was a moderate uphill, but coming right off a large breakfast left me sluggish and with not a lot of energy, as my body was more interested in digesting food than it was hiking.

A little after noon, we made it to the campsite at mile 547.2, the one-quarter point on the AT. (We had planned to camp there last night, actually, but decided against pushing that far.) 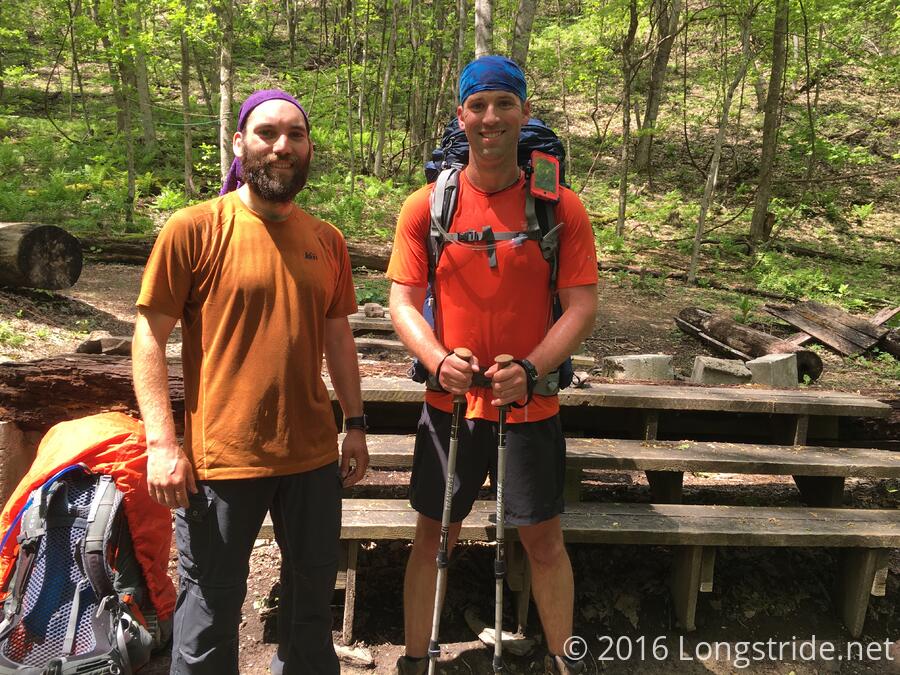 One Quarter — Longstride and Beast at the one-quarter marker. 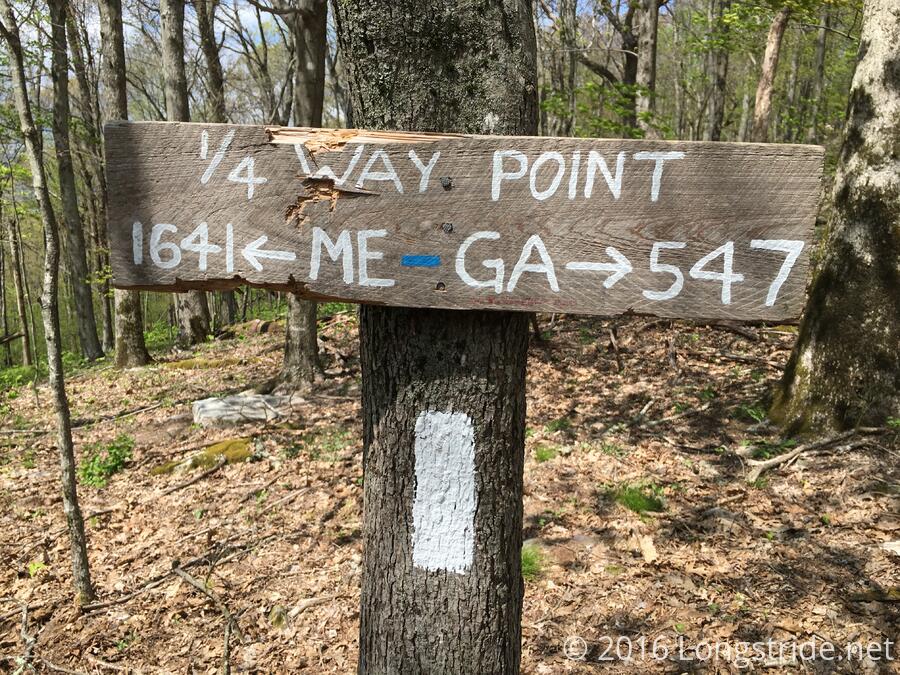 Throughout the day, Beast continued to not feel well, and he finally realized that he had a cold, presenting the same symptoms I had last month with my cold: lack of appetite, runny nose with thick snot, and a general lack of energy — enough for flats and downhills, but only enough to quickly run out of steam going uphill. The original plan for today had us pushing 15 or 20 miles today (to a shelter or campsite), but with a sick Beast, and remembering the cold I had, I knew he wasn't going to make it 20 miles, so I quickly decided we were only going as far as the shelter.

For me, the rest of the day was nice (if slow as I tried not to get too far ahead of Beast), and me, Beast, Sassy, and two other hikers vaguely hiking with us today continually passed each other as we stopped for breaks. 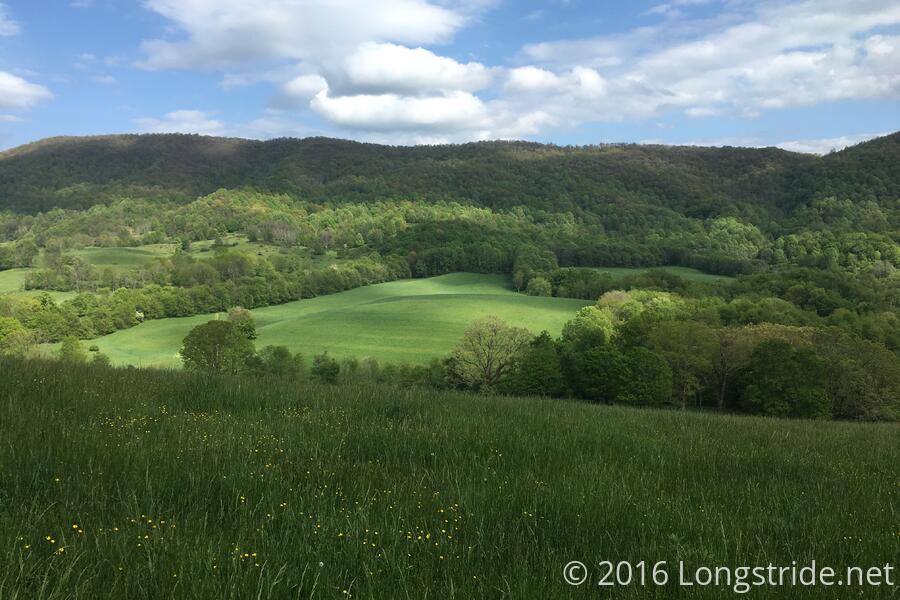 The last part of the day brought us the promise of trail magic at a road a few miles up ahead, and after making sure Beast was confident he'd be able to make it, I charged on, up a cow pasture (where there were some calves) and through the woods, in what was probably my fastest segment of the day. The trail magic turned out to be sodas and cookies from the owner of a new hostel, who was waiting at a local park adjacent to the trail with his truck to shuttle people to the hostel.

Beast finally arrived, dead tired, and after he had some time to recover, the decision was made to camp at the campsites on the trail just north of the park.

Tonight, there are six of us here: me, Beast, Sassy, Jason, a hiker whose name I didn't get, and Brook, a section hiker from Boston on her second day of the trail.

Jason is an ex-military thru-hiker. He originally was planning on returning to the US Virgin Islands after his tour, and then he remembered his mountain training on Springer Mountain, and decided to hike the AT first. He's particularly unique in that he carries an unusual amount of Gatorade and soda in his pack, eschewing some other items most hikers have to make room. (For example, he only eats food that does not require cooking so that he doesn't need to carry a stove and fuel.)

During dinner, Beast made the discovery that one of his toes (which had felt raw earlier in the day, and which, at the time, he had attributed to a blister that grew enough to push the toe up far enough to rub against the top of his boot) was discolored, and possibly broken. This toe was the same one that had a giant blister and bruise underneath it last week (the reason he got off the trail during his slackpack), and is next to the metatarsal that broke last year. This despite him going slow and carefully because of his cold. (A heavier than usual pack may have contributed, but an awful lot of things lined up to go wrong for his foot.)

Truly not a good week for Beast.

Tomorrow: sticking to the plan would have had us with a 22 mile day to the Jenkins Shelter, but it's clear that's not happening. We're just going to play it by ear and see how far we get.