I managed to get started hiking before 8 today, which was great since I spent a fair amount of time not actually progressing down the trail today.

The day started off very easy, with gradual down and uphills allowing me to maintain a 3 mph pace for the first two miles of the day, before the steep uphill to the Spy Rock side trail. Early on, the trail went through an area covered in ferns. 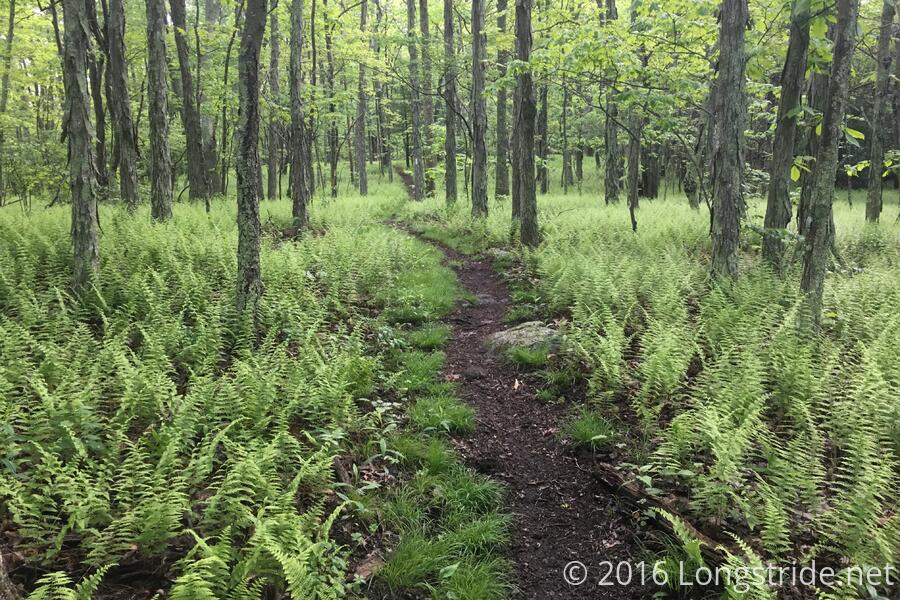 Spy Rock, a short distance off the AT, features a rock scramble (not too difficult without a pack on) up a large rock outcropping. The top provides a view of the entire surrounding area. Also on the top, besides cell reception, were pools of water in divots in the rock, that had tadpoles in them.

After returning to the trail, it leveled out for a bit, then resumed a steep climb up The Priest. (Why it's called that, I don't know; my guidebook doesn't say). At The Priest Shelter, just short of the summit, I got water, and took a longer than usual lunch break to dry out my clothes (and especially my socks). My shirt later wound up just as wet as it was, but drying out the socks helped my feet out for awhile, at least.

Because of the shelter's name, it's common for hikers to write "confessions" in the shelter log. These make for an interesting read (though the shelter logs are generally always interesting to read), and while there was quite some variety in the logs, there were a lot of entries confessing to not digging an adequately deep cathole (or going to the bathroom too close to the trail), which is not really much of a confession since everyone skimps on the Leave No Trace bathroom requirements at least some of the time. It's like admitting to speeding, though a bit grosser.

The 4.3 mile 3100 ft hike down the priest was the longest single downhill so far (or rather, it seemed like it was). About halfway down, a sudden break break in the trees at a switchback provided an unexpected and beautiful view of the landscape below. 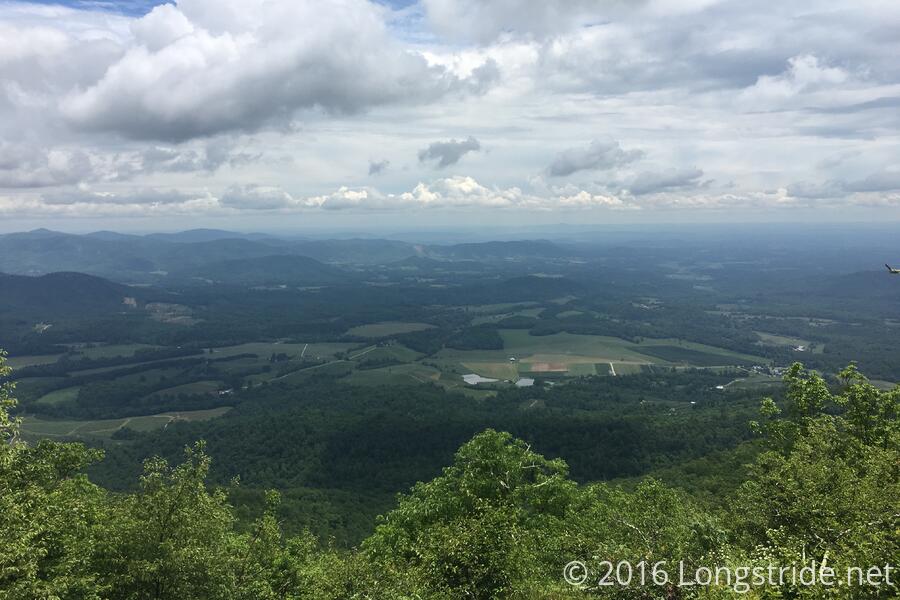 View South-East from The Priest — The town of Massies Mill is in the distance.

The climb down The Priest is followed by a climb up Three Ridges Mountain, just as high, though a few miles longer and with a short downhill a third of the way up that leads to Harpers Creek Shelter, where I stopped for the day. This climb is supposed to be the last significant climb until we get to the northeast (though I haven't actually verified that in the guidebook yet).

Despite a 20 mile day planned for tomorrow, and the threat of rain overnight, I decided to tent today, rather than staying in the shelter. Mostly I didn't want to deal with people today, but it was also an excuse to pick the furthest campsite away from everyone else and sit around in my undies to let my pants dry out. (They did not.)

Hanging a bear bag today was an exercise in frustration. It took three different trees and probably 15 throws in total before I got my bear line somewhere even remotely passable (and even then, it wound up a little too low to the ground).