I got started on a 22 mile day this morning around 7:30, continuing my ascent of Three Ridges Mountain, an arduous climb up 2100 feet over 3.3 miles, featuring rock fields and short rock scrambles. The top, though, had a nice view, and I stopped for a break there, probably for too long given I still had 19 miles to go. This would be a recurring theme throughout the day. 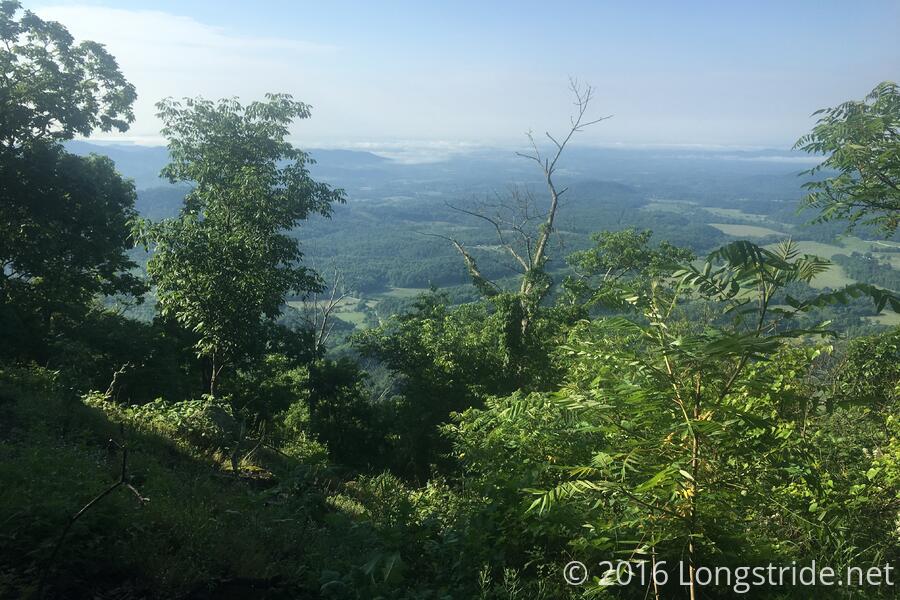 View South-East from Three Ridges Mountain — The town of Tyro is just off the edge of the right side. Massies Mill would be further up, hidden behind the tree branch. 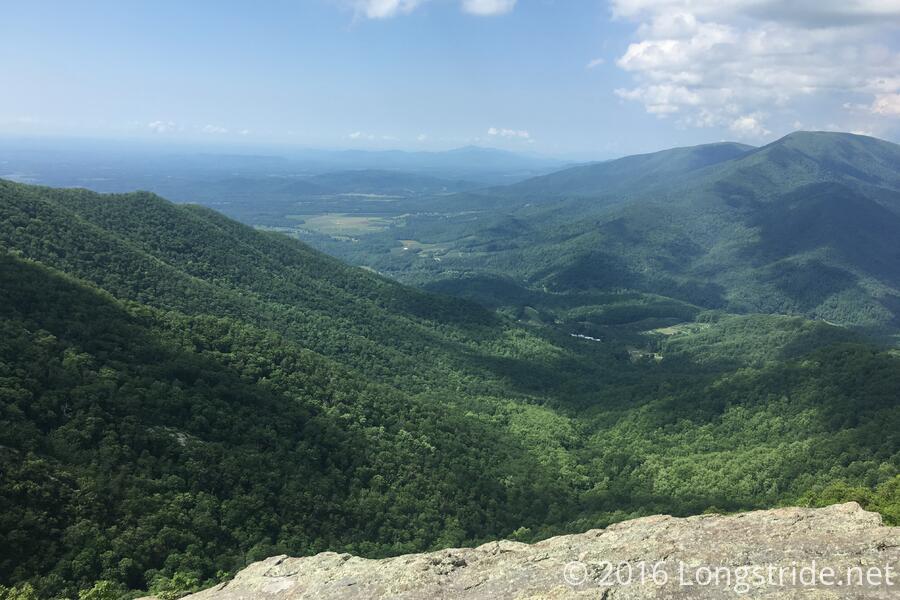 View from Hanging Rock Overlook — The north end of the Three Ridges Mountain ridgeline, looking to the southwest. Harpers Creek Shelter is in the valley closer to the camera. The Priest is the mountain to the right; the trail follows the ridgeline down, crosses the road, cuts to the right behind the field, follows the ridge on the right, before cutting in to the shelter. From there, it climbs to the ridge on the left, heading away from the camera on its way to the top, before looping around and following the ridgeline to here.

Another three miles brought me to lunch at the Maupin Field Shelter, the first shelter on the trail to have a bear pole. (More on that later.)

Through the rest of the day, there were a few places with great views, but in most cases, I just skipped by them since I had quite a distance to go (and for most of the day, was misremembering the planned 22 miles as only 20 miles).

A not trivial portion of today's hike was on rough or rocky terrain, which, in addition to the length, really wore on my feet. The descent down Humpback Mountain in particular was tiresome, and alternated between soft and easy, and very rocky. The final downhill, though a bit long, was generally like carpet, and it made the last mile or two into the Paul C. Wolfe shelter much faster.

Although I got water at Maupin Field, my water bladder ran out of water a mile or two away from Wolfe. (I still had a bit more left in my water bottle, so I didn't completely run dry.) This made the first order of business upon arriving fetching more water.

The Paul C. Wolfe shelter is large, with two levels, and a rarity, windows. (Some shelters have translucent roof panels to aid in illumination, but transparent side panels are uncommon.)

It's also the second shelter to have a bear pole. Bear poles are a very simple way of keeping food away from bears. They consist of a tall pole, with hooks on the top which you hang food bags on, and a second pole with prongs you use to hoist food bags up to the hooks. It's conceptually simple, but actually requires a bit of finesse to maneuver heavy food bags into place. What a number of people wound up doing was using the pole as if it were a tree for a bear hang, where they just used the movable pole to get a rope over the hooks, and then hoisted the food bags up and tied the rope to a nearby tree.

Because of my long day, I didn't get to the shelter until after 7, and I was really tired when I got there (the uphill at the start of the day really drained me). As a result, I wound up not having my second course of dinner. I was literally too tired to eat.

Possibly worse than being hungry, is knowing that because you're too tired to prepare and eat a meal now, you will be hungry later when you can't do anything about it (because it'll be dark and all your food will be hanging from a pole off in the distance).

But, such is life on the Appalachian Trail.