Galehead Hut provided us with an excellent breakfast of oatmeal, pancakes, and bacon. I ate as much as I could manage to fit in my stomach.

Rainbow and Papa Monkey left before me; I needed to make use of the privy before taking off. I got started around 8:20, later than I wanted, but there wasn't really much I could do about that. Happily, the trail felt like it was a bit easier, and I was able to move a little faster today than I did yesterday, even if the early day did start out with a trail full of rocks.

Just under a mile brought me to South Twin Mountain, where a couple were nice enough to get some photos of me on the rock outcrops. 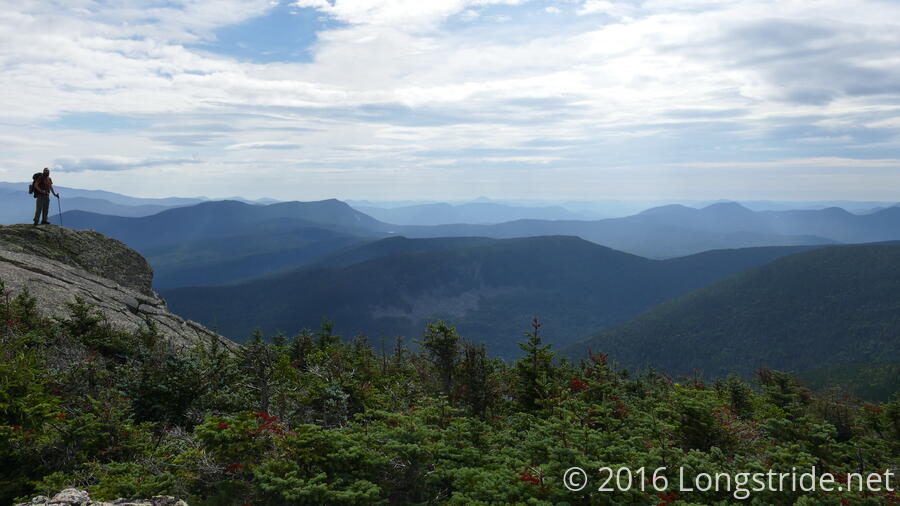 The view from Mt. Guyot provided a nice look back at Franconia and Garfield Ridges, which I crossed in the awful weather yesterday.

I took my first break at a stealth campsite near the Zealand Pond trail intersection. While I wasn't really trying to hide, the site must have been fairly unnoticeable, since a group of hikers only noticed I was there when their dog came to investigate me.

I met up with Rainbow and Papa Monkey at the Zealand Falls Hut. In contrast with the steep and rocky trail to the hut, the trail leading north from the hut was very easy, and mostly flat, or had a gradual incline. It was a refreshing change to the steep, rocky trail most of the Whites had been.

Once we finished our hike, we drove back to Franconia Notch to pick up Papa Monkey's car. Having decided to stay at White Birches tonight, we drove to Gorham. We dropped Papa Monkey off there so he could get a shower while Rainbow and I drove back to White Mountain to make reservations for when we'd be done with the Whites, and also to take another look at their maps of the trail to get a better idea for what access points and options we have to slackpack north of Gentian Pond Shelter.

Papa Monkey drove to Walmart to resupply while Rainbow and I got our showers; then, the three of us met at J's again for dinner.