We got up around 6:30, and left White Birches a little after 7, slightly behind schedule, though not terribly so. After dropping my car off at Pinkham Notch, we headed to the Mt. Washington Auto Road to drive up the tallest mountain in the Whites and begin our hike back down to Pinkham Notch.

We wanted to get to the auto road as soon as it opened (7:30 am), and though we eventually wound up there a little later than we wanted, there was no one in front of us, and we were able to go up the mountain at our own pace. As part of the entry fee for the auto road, you get a CD that provides narration during the drive up. As it turned out, we parked the car at the top almost exactly when the narration for the drive up ended.

When we got to the summit, it was in fog, 42 degrees with 35 mph winds. It was cold. I was glad I had brought my fleece and pants legs with me, though they were in my pack so they weren't really doing much good at the time.

We walked through the museum in the main building at the summit, and hung out in the food court for (I thought) entirely too long; we didn't start hiking until sometime after 9:30. By then, some of the fog had lifted, and the winds died down a little. It was still a little cool, but I was warm enough. We took pictures at the summit, and then got started on our hike. 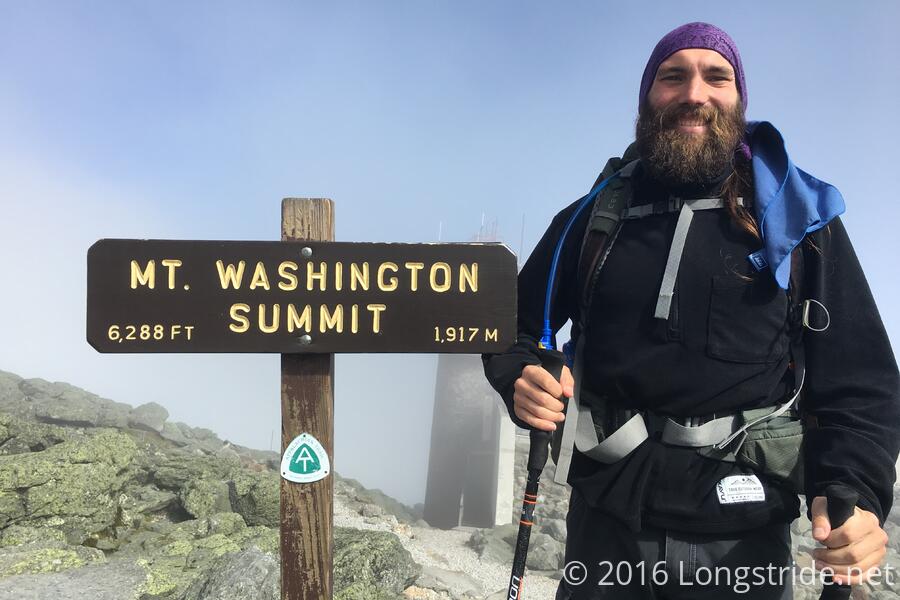 As the clouds slowly dispersed, we got some great views of the neighboring mountains, and we took our time working our way down from summit, taking ample photos.

The top of Mt. Washington is a large rock pile. It was not especially difficult to traverse, but it was tedious and slow. This would turn out to be a harbinger of the rest of the day. At least, the views were spectacular. 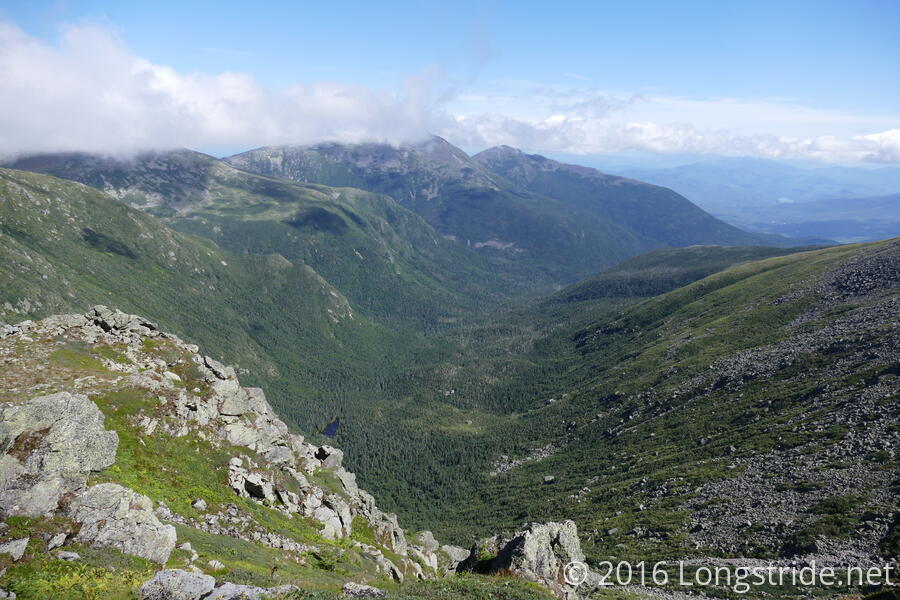 The Great Gulf Wilderness — A glacial cirque, bounded by Mts. Washington, Clay, Jefferson, Adams, and Madison. The AT traverses the ridges of those mountains.

The AT was very sporadically blazed, especially on Mt. Washington, so early on, I took a short jaunt down the wrong trail at an intersection. Fortunately, I realized my mistake relatively quickly, when I noticed the trail didn't seem to be heading up towards Mt. Jefferson, as Rainbow indicated it would. (He had already gone past me, and Papa Monkey was some distance behind.) I called out to another hiker on a higher trail than I was on and asked if they were on the AT. I couldn't hear their response, but the way they were waving their poles around confirmed I was on the wrong trail. All told, this probably only cost me 15 minutes or so.

On the way up to Mt. Jefferson, a group from the University of Vermont was conducting a survey on trail usage, collecting information on how many people hikers passed, and at what point people thought was too much. I filled out the survey, but later in the day, I wished I hadn't, only because it took time, and the hiking today was very slow.

The hike up Mt. Jefferson wasn't too bad, but the back side of the mountain was a rock pile just like Washington, and descending down to the Madison Spring Hut was really slow.

How slow? It took until 2:45 pm to do about six miles from the top of Mt. Washington to the Madison Spring Hut, at least five hours. This was a problem, because from the hut, it was another 7.8 miles to Pinkham Notch, and at the rate I'd been going, that'd put me there well after dark.

And I realized, while getting my snack out at the hut, that I didn't put my headlamp back into my pack after pulling it out last night. Oops. At least now I had extra motivation to finish before sunset.

Rainbow had gotten to the hut about 15 minutes before me, and left around 3. I didn't leave the hut until around 3:15, shortly after Papa Monkey made it there. At least we weren't too far apart at this point in the day.

Leaving the hut, I began the climb up Mt. Madison. It was a massive pile of rocks, which actually was kind of fun and interesting to climb up. The rocks were all very rough, and not slippery at all, so I wasn't terribly worried about slipping and falling. The next few hours, climbing up Madison, and then following the top of the mountain ridge down to the treeline, was an exercise in path finding. The trail was marked out by rock cairns (that occasionally at a distance were a little difficult to discern from the rest of the rocks), and you had to find a path from one cairn to the next. Usually, the path was largely evident, but there would often be multiple ways to go (of varying difficulties), and it was very much a choose-your-own-difficulty part of the hike. For the most part, this was not particularly difficult, just very tedious and slow because you could rarely take a full-length stride.

Eventually, though, the trail dropped below the treeline, and while the rocks decreased in number, it was still a steep, rocky climb down the mountain, a race against time since it was now 5 pm with miles left to go, and sunset at 7:41 pm.

I stopped for a second break around 6:15, with just under four miles to go. This killed ten minutes of daylight, but I needed the energy boost. The trail continued to be somewhat rugged for a little while, until it turned onto a different trail that seems to have once been an old road, so there were a few easy sections, especially as the trail got close to the Pinkham Notch visitor center.

While the last 20-25 minutes of hiking required a bit more care as it gradually got darker and harder to see, it wasn't too bad. I finally made it to the parking lot there around 8 pm, a bit after sunset.

Although it was a bit more expensive than we really wanted, we decided to stay at the AMC Highland Center at Crawford Notch. Although we missed dinner, we'd be able to get a good buffet breakfast in the morning, and it put us close to where we need to start hiking from in the morning. Tomorrow's hike is a race against time, of sorts, since we need to make it to the car at the top of Mt. Washington before 6:45, when the auto road closes for exiting traffic.