White Mountain hostel includes breakfast with stays, so I got up just before the 7 am breakfast, which was a tasty breakfast burrito, hash browns, and a muffin.

The weather outside looked miserably dreary outside, and Papa Monkey and I were conflicted on what to do. Rainbow was adamant about not hiking at all, and especially not anywhere in the Whites. Taking his opinion into consideration, Papa Monkey and I decided to hike the section north of Gorham, from Gentian Pond Shelter back to the hostel.

We were also conflicted on where to stay. Papa Monkey didn't really like White Mountain hostel, though Rainbow and I were both fine with it. The hostel fills up fast, usually days in advance, so we were lucky to even have the option for staying here tonight. We chose not to commit to staying before we left, though.

This 11.8 mile section of trail, still part of the Whites, though not part of the White Mountains National Forest, and so was still going to be somewhat difficult. Hiking it was complicated in that the trail we needed to use to get to the AT was down a long dirt road, requiring a three mile hike down the road (once it became impassable) and up the mountain.

Pond on the Austin Brook Trail

We started late, almost 9:45, and it took us at least an hour to actually get to the Gentian Pond Shelter, a short distance from the AT. I stopped to sign the shelter log, and then continued towards the AT, not waiting for Papa Monkey (who stopped to use the privy) since I thought I saw him ahead down the trail.

It was a bit unnerving; I thought I was going relatively fast, though I was clearly moving pretty sluggishly, being unable to catch up with him. Eventually, I stopped trying to catch up, and settled into a reasonable, but slow, pace.

While crossing a bog, I ran into One Feather, whom I hadn't seen since the day we were at Bake Oven Knob Shelter in Pennsylvania. I asked about Papa Monkey; he hadn't seen him, which was odd since he should have been ahead of me. There's any number of ways he could be ahead and One Feather didn't see him, so it was a curiosity, but not really something I was worried about. And at this point, turning back to look for him would just result in killing time I needed to make forward progress. 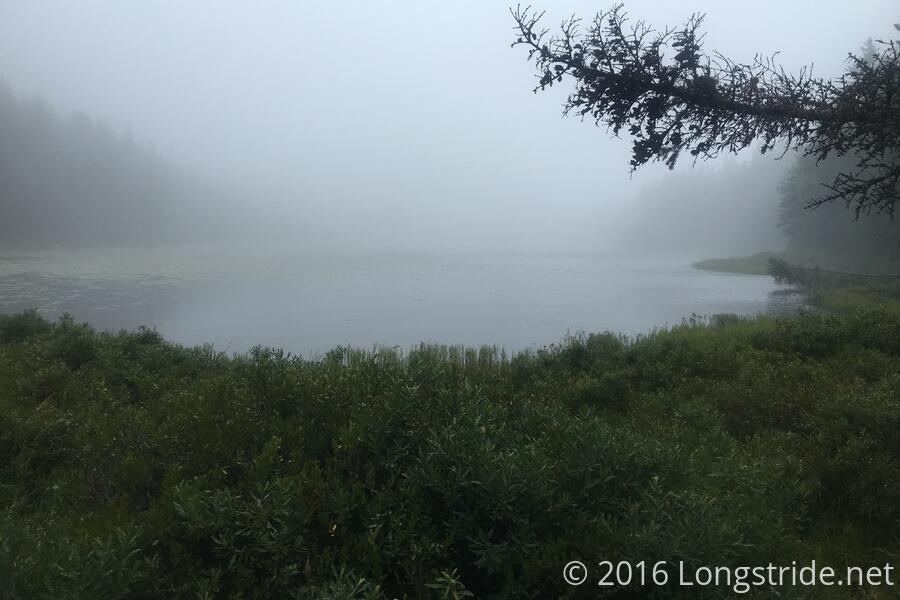 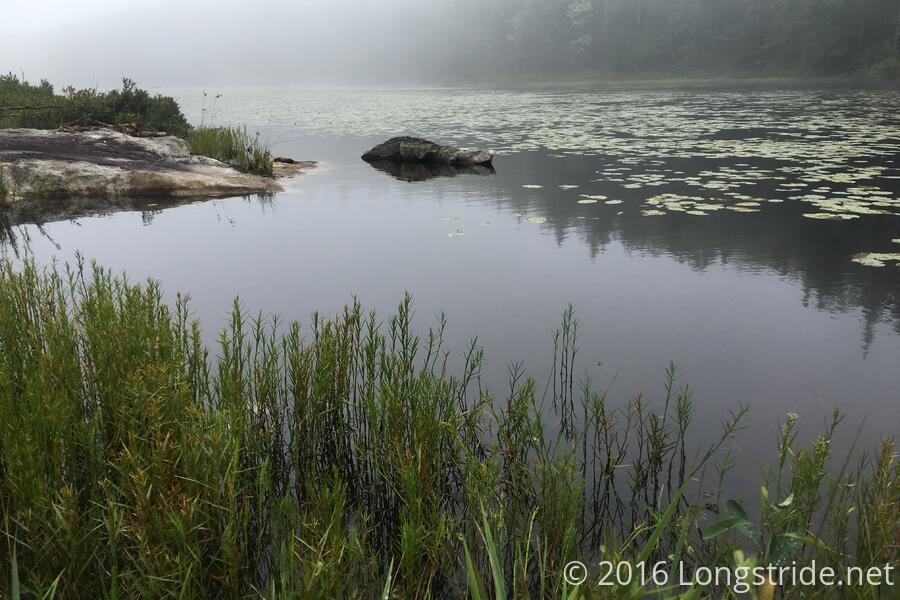 Overall, the day felt like it was pretty slow, hindered by the wet conditions, occasional light rain, mountaintop fog, a substantial number of short rock climbs and long, steep rock ledges. I took my first break, after 5.5 miles, at a trail intersection at the 1900.5 mile point, and a second break five miles later. By this point, I'd passed a few other people going north, with no sign of Papa Monkey. But there wasn't anything I could do about that now.

The last mile or so down from Mt. Hays, once the trail leveled out was pretty nice, which helped since it was starting to get late. The trail eventually turned into a gravel road, and then onto the paved North Road for a short distance before running into the hostel, where I arrived at 6:30.

Upon arriving, much to my bemusement, Papa Monkey's car was gone. Switching my phone out of airplane mode, I received a text from Rainbow asking where I was, and indicating that he had gone to pick Papa Monkey up from the trailhead. Apparently, Papa Monkey had gone north, rather than south, due to a glitch in the app he was using for trail navigation; it showed he was getting closer to US 2, rather than further away. (I "just" read the signs and followed the trail according to the signs and what my guidebook said, and so didn't have that problem.) Papa Monkey didn't realize he was going the wrong way until he reached the sign for the New Hampshire - Maine border. Ironically, the one mountain he hiked (twice) over today was Mt. Success.

At the time he left to pick up Papa Monkey, White Mountain had filled up, so we needed an alternate place. That problem fell to me to solve, since Rainbow barely had signal at the trailhead. I went through the guidebook, and called the next closest place, the White Birches Camping Park. They had vacancies, were only a mile or two down the road, and even had a free trailhead pickup, so I reserved three bunk spaces there and had them pick me up from White Mountain's driveway.

White Birches is mostly an RV campground, but it also has a small six-bunk hiker hostel. It's pretty inexpensive, and showers, restrooms, and laundry are located conveniently close to the hostel.

Papa Monkey and Rainbow wound up getting there around 7:45, and after showers, we went to Mr. Pizza, an Italian restaurant, at the recommendation of White Birches' owner. (I was going to order pizza from there had they not gotten back when they did.)

Just after we got back to the hostel, it started raining again. This didn't bode well for making progress tomorrow.