Papa Monkey said he wanted to leave at 5, so I got up at 4:30 and readied my gear. Rainbow and I left a little late, at 5:05, to pick up Papa Monkey, who stayed at White Birches last night. He wasn't actually ready, so we didn't leave there until 5:30.

The drive to the Carlo Col trailhead went ten miles over a bumpy, rocky dirt road, which took forever to drive (my poor car!), and we didn't get there until 6:30. It was overcast out; but I had high hopes for the day. It was supposed to be sunny all day! (Actually, no. I misread the weather forecast. It would be sunny all day tomorrow.)

As with Gentian Pond, getting to Carlo Col required taking a side trail (2.6 miles, this time) before reaching the AT. The first part of the Carlo Col Trail was a nice dirt/grass road, before diving into the woods and crossing a stream.

The stream, which should have been easy to cross, was fast-moving and swollen, due to last night's rain. As I tried to cross, standing on a rock and trying to find a suitable path that would get my feet as little wet as possible, I slipped off the rock, and my right foot got nearly completely submerged. At that point, trying to keep my feet dry had little meaning, and I walked across as quickly as possible.

My left shoe didn't pick up much water, but I had to stop a few times going up to Carlo Col to wring out my socks. My foot was a little wet and cold most of the day, which was unfortunate, but it could have been a lot worse.

I was a little disappointed to be doing this section of trail before the section between Gentian Pond and Carlo Col; I don't mind the gap so much, but this puts me in Maine before I've completely finished New Hampshire. I had wanted to get to the last state on the trail in proper order. Oh well. (I could have done the gap section yesterday, which would have been most efficient, but I wanted to zero instead.)

On the way up Goose Eye Mountain, the trail went through a bog, and with the fog that had now blown in, it was quite difficult to see where the trail went. I managed to go off-trail, got turned around, went back the way I came, and went back down the trail going south, though caught myself before going too far. When I got reoriented, I found the cairn marking the trail I missed before, and continued ahead. Ironically, the place where I got turned around was right about where the trail actually went, I just couldn't tell which way was north.

I took a break at the Full Goose Shelter after about seven miles, and prepared myself for the Mahoosuc Notch. The AWOL Guide describes the notch as the "most difficult or fun mile on the AT; make way through jumbled pit of boulders". And for the last 1900 miles, the notch's reputation has preceded itself, as everyone gave their impression or thoughts on what to expect.

The shelter log contained a few recent entries from SOBOs. One reminded people to maintain three points of contact at all time. Another reported that he came across three people who were injured; two with dislocated shoulders and one with a possible concussion.

With it wet from the fog and last night's rain, and windy, this didn't bode well.

The Mahoosuc Notch was indeed quite difficult, and fun (in a masochistic sort of way, much like the Whites), but I thought that it was easier than I expected. When I got to the notch, I put away my poles, and just took my time, maintaining three (or more) points of contact whenever feasible, adequately planning routes before committing, and taking everything slowly, without rushing. 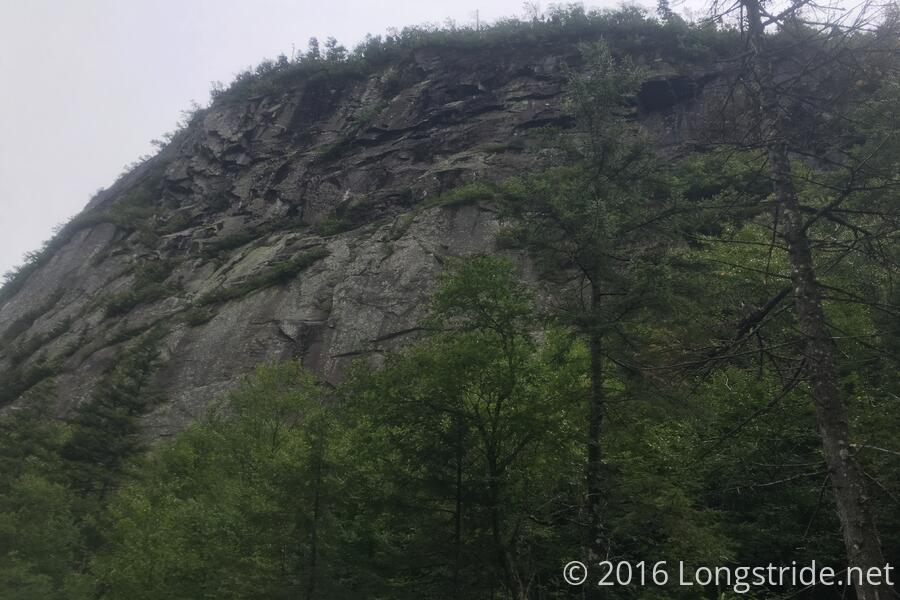 Mahoosuc Notch — Pictures can't really do the notch justice, so this is one of its sides, instead.

I think it took me an hour and a half to go the mile through the notch, but I am pleased to report I did it with no injuries.

With my poles already put away, I continued the rest of the day without them, since there was still a lot of rock scrambling and climbing involved. The Mahoosuc Notch behind, ahead was the Mahoosuc Arm, a seemingly mile-long slab of rock (waterfall, even, due to the rain) that demanded climbing.

With my poles away, a better route was evident: on the side of the rock slab was a narrow dirt path that weaved between trees. I climbed the mountain by walking up the dirt path, pulling myself forward using the trees for additional leverage and speed. (I pitied the SOBOs who were descending the rock, slowly inching forward so as not to slip.)

Because it was somewhat cold and windy, my phone's battery thought it had much less power ban it actually had, and my phone shut off about ten miles into today's hike, so I unfortunately don't have a full GPS trace of my hike for today (or photos after that point).

I took a break just after the quite scenic Speck Pond. The hike up Old Speck Mountain, on an exposed ridge with some slab and rock climbing was made more difficult by the high wind and fog that blew in. The wind and fog blew out shortly after, though, and the three and a half mile hike down to Grafton Notch was pleasant.

Rainbow, Papa Monkey, and I went to J's again for dinner. This would potentially be the last time we'd all be at the same place at the same time; after tomorrow, we'd all go our separate ways.