After another fantastic breakfast, I finished packing my food and scheduled a food drop for Jo-Mary Road on Saturday at 2:30 pm, coinciding with two other people who have a food drop then as well. I still had to pay $80 up-front for the food drop, but should get a nice refund assuming they don’t change their delivery time between now and then.

Unfortunately, I was again the only person getting a shuttle to the Otter Pond trailhead, so it was again annoyingly expensive. I didn’t get to the trailhead until almost 10 am, an rather late start given what was ahead. After the three quarter mile approach from yesterday (which was complicated by having a full pack on; I had to take it off to get under the tree), the trail continued uphill, steeper, to Barren Mountain.

Once back on the trail and on the way up to Barren Mountain, the trail passed through an area that was incredibly rocky and rooty. So much so that there was almost no trail to speak of. In what must be one of the most heavily blazed short sections of trail, I could see five blazes from one point, and every one of them was necessary. 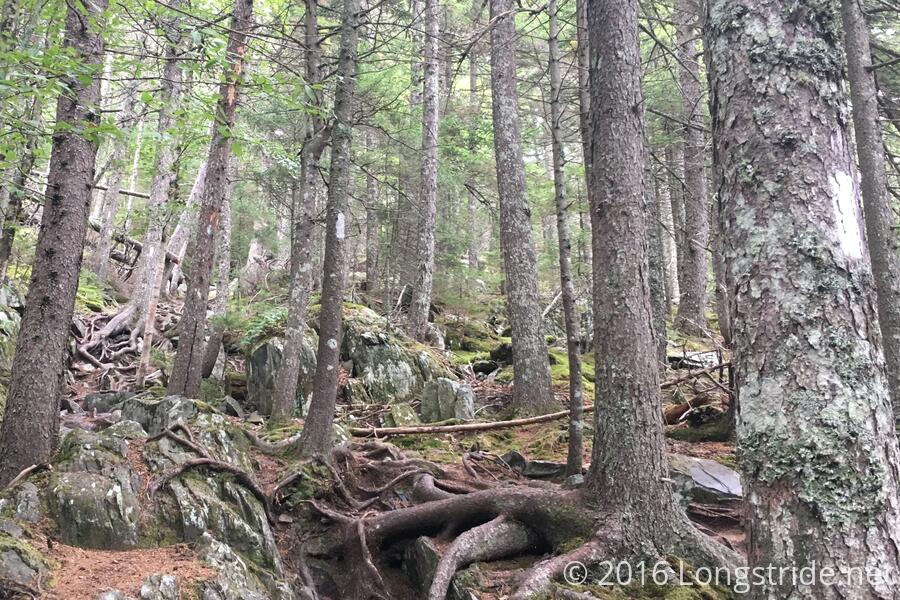 Five Blazes — There are five blazes in this photo, and every one of them is necessary.

The weather today was decidedly less friendly, and though it wasn’t actively raining, it was foggy and dismal out. The remains of a lookout tower adorned the top of Barren Mountain; nothing much to see, especially with the clouds. I pressed on.

Around 12:30, I stopped for my first break, at the trail to the Cloud Pond Lean-to, joining Mothly Stud, and three section hikers from Kansas, who were a bit out of their league, the relatively flat Kansas not being much of a proper introduction to the hills of the Appalachian Trail. Two of them went off to get water at the shelter, while the third (who was having more difficulty, and also was more injury-prone) waited with Mothly Stud and I.

We chatted for awhile, the two of us talking about our experiences and trying to instill some more confidence to the third section hiker (whom I attempted to name Band-Aid, on account of being injury-prone and the number of band-aids she was wearing, but I’m fairly certain she didn’t catch the hint).

Mothly Stud was in a hurry to eat and/or give away excess food, apparently having packed too much for his trek through the Wilderness. I didn’t want to take on more weight, but I was happy to take an oatmeal creme pie.

Continuing on, the trail came to the Fourth Mountain Bog, which was visually interesting. I had been told there were significant numbers of carnivorous plants here, but I did not see any; it’s likely I didn’t know what exactly I was looking for.

The climb up and over Fourth Mountain was a slog; the trail was wet, steep, and rocky, all conspiring together to kill my pace for the day. My feet hurting, I stopped after 7 miles, around 3 pm, to rest my feet.

My original plan for the day was to make it to the campsite at the West Branch of the Pleasant River, but that being eight miles ahead seemed at this point an unlikely destination for today. Instead, I’d shoot for the Chairback Gap Lean-to, only another three and a half miles ahead, cutting today short by about five miles.

I took another break about an hour and a mile later, after crossing Mt. Three and a Half, and Third Mountain. (Creative naming, there.) 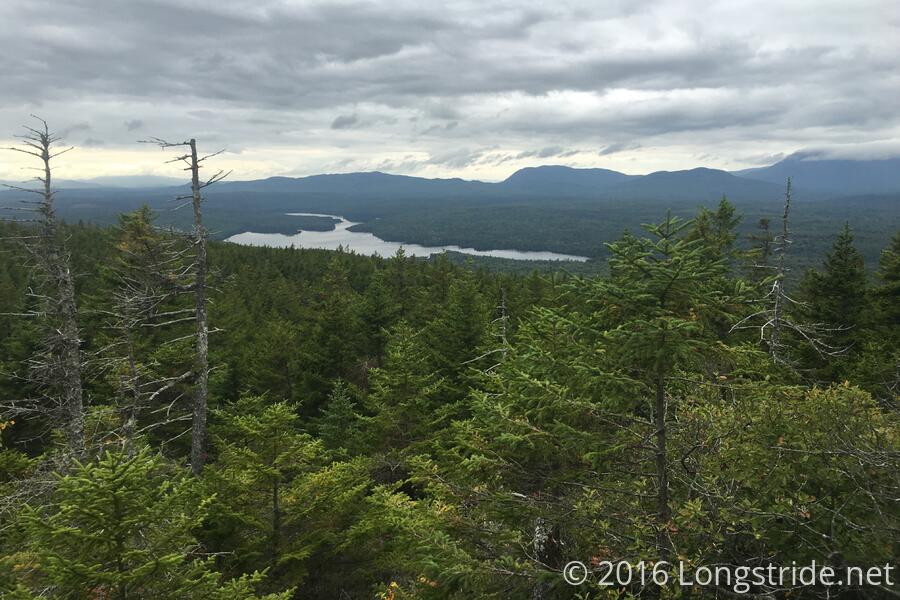 Approaching the shelter, the trail took a detour onto a new section of trail, adding a tenth of a mile on very soft ground. (So soft, it was almost difficult to walk on!) I finally made it to the shelter at 5:45, only making 10.7 miles in 8 hours, a pretty awful pace.

To make matters worse, the water near the shelter was awful, by far the worst I’ve seen in a long time. I decided to not even bother collecting water, and resigned myself to having a dinner of snacks; at least that’d get me to sleep a little earlier, since I wouldn’t have to cook.

Fortunately, hiker Good Boy, who arrived a bit after me, offered to give me some of his water, enough that I was able to cook mac & cheese, and, with what I had left over from hiking, make it to the next water source tomorrow.

Today was very difficult, far more so than I expected from the elevation profile, and it worried me that, if the trail continued to be this difficult going north, I wouldn’t make it to my food pickup in time. About the only good news from today was that I (just barely) have passed 2100 miles. Less than 90 to go!