I got out of camp just before six this morning, and got started on my goal to make it to Jo-Mary Road, 15.4 miles ahead, by 2:30 pm for my food drop. I was cautiously optimistic this would not be a problem, because the elevation profile looked wonderful: aside from climbing 800 feet to go over Little Boardman Mountain, the whole day was a very gradual downhill.

Elevation profiles are only half the story, though. The trail could be very smooth and you could easily go 3 mph, or it could be a rocky mess and you'd be lucky to get 1.5 mph.

Fortunately, for the majority of the day, the trail was pretty nice. It was occasionally rocky and rooty, but only for short periods did this hinder hiking quickly.

My first break was at a stealth campsite near Mountain View Pond, at which point I had maintained well over a 2 mph pace. By my second break at the Cooper Brook Falls Lean-to, I knew I wasn't going to have a problem making my deadline; in fact, I'd probably get there early. (That didn't slow me down, though.) 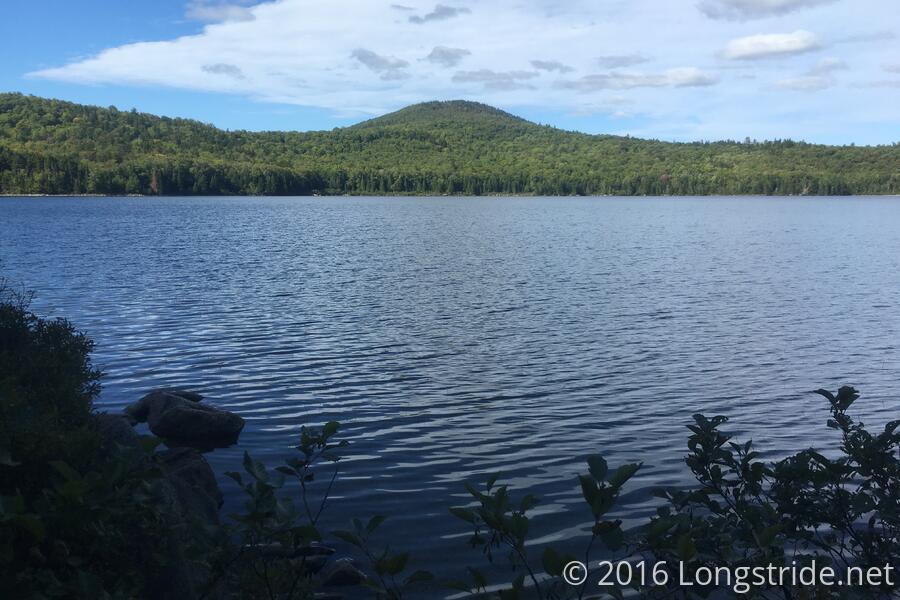 The Cooper Brook Falls Lean-to had a wonderful site: a swimming hole sat just downhill from the shelter, with a multiple cascade waterfall shortly upstream. It was a great location; I was almost disappointed I couldn't stay there. 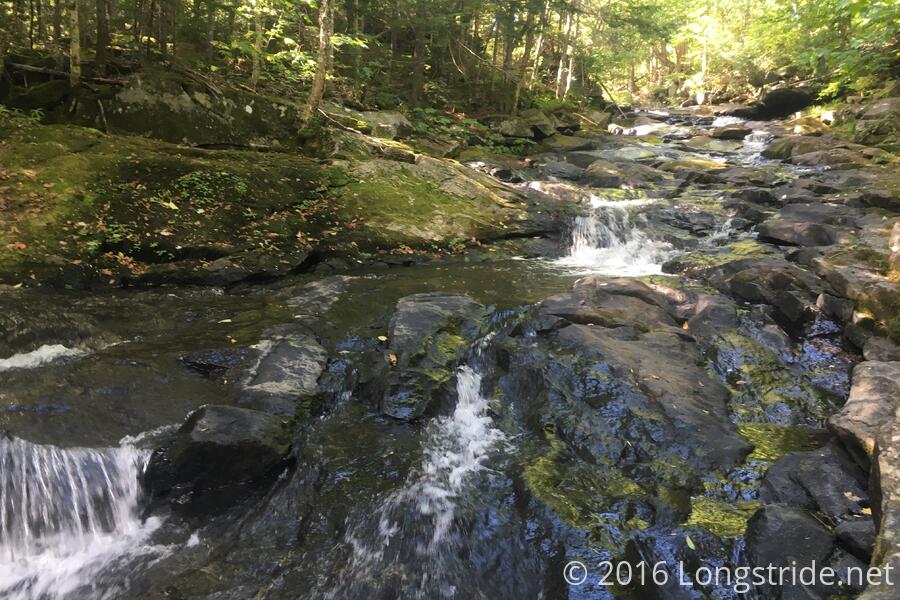 After leaving the shelter, for the first time on the trail, I completed "12 before 12" — 12 miles before noon. I kept hat pace up, arriving at Jo-Mary Rd at 12:58: an hour and a half before I needed to be there.

I took the opportunity to relax, and bake my socks and pack in the sun, to get them dry for the first time in days. With the humidity more manageable today, the rest of my clothes mostly dried out while I was sitting in the shade.

My plan was to summit Katahdin next Wednesday, but the weather forecasts have been saying that it will rain (or worse) on Wednesday, while Tuesday looks to be a perfect day. So, I decided I needed to get to The Birches, the campsite at the base of Katahdin, a day early. I reworked my plan, and set myself a stretch goal for the day.

I'd easily make it to Antlers Campsite, only another 4.2 miles away (just under two hours). If I could make it the 3.5 miles further to the Potaywadjo Spring Lean-to, that'd set me up for doing a 22 and a 21 the next two days to get to The Birches on Monday evening. (If not, it'd still be doable, it just means a 25.5 mile day tomorrow, which would my longest by 0.2 miles, though with considerably better terrain.)

Unfortunately, my food drop arrived 15 minutes late, eating into the limited time I had to make it to my destination. (The refund for there being two other people on the food drop was also a little light, but I'm sure that'll be easily resolved once I have cell service.) But, there were free sodas, so that at least provided a little pick-me-up.

I made it to the Antlers Campsite around 5. A sprawling series of paths to quite a large number of tentsites; there were probably easily 15 people here by sundown, if not more.

The Antlers Campsite is known for its "Fort Relief" two-seat privy. Inside the structure, there actually are two seats, next to each other. Presumably, this was done so MATC could build one structure, and have it last twice as long as a normal-sized privy. (There's no divider inside, so actually using it with two people is somewhat impractical, unless you're into that sort of thing.)

With a water source here, I decided to stop and make dinner. (I'd need to stop for a break somewhere between Jo-Mary Rd and the shelter; making that break a dinner break would save some time, though at the risk of not making it to the shelter before sundown.) Someone with cell service confirmed the forecast for rain for Wednesday, so that all but cinched the decision to move on after I was done with dinner.

I didn't finish dinner until around 6, though, so I decided to stay, rather than have a partial night-hike to the shelter.

Because of the rain forecast, several others at the campsite are planning to rush in to have good weather on summit day. Katahdin's gonna be crowded on Tuesday, between us and the people already planning to summit then.