Today brought me into Grants. However, due to fire and snow issues, Grants probably marks the end of the trail for me in New Mexico, at least for now.

It was very warm overnight, which made it easy to wake up and get out of my tent, which I actually managed to do by 5:45 am. This was great, because a sixteen mile roadwalk awaited us. I didn’t start hiking until an hour later, but that was still much earlier than I’d started hiking most other days.

Plus, there was a Subway after “only” about nine miles, so there’d be a good place to stop for lunch.

While I was taking down my tent, Simple poked his head out of his tent and gave me some good news: another hiker, Silver, had booked an extra night he no longer needed for his room at the Days Inn a few miles south of Grants, and had gifted it to Simple. The room having two beds, Simple offered that I could share it with him. While I’d already booked a bunk tonight at the Lava Flow Hostel (which was very cheap, only $15), staying in a motel room (for free) was a significant upgrade. So I accepted Simple’s offer.

In the morning, I was also able to get a little clarity on the forest closures. As a result of the preemptive national forest closures to prevent new fires, about 186 of the 252 trail miles between Grants and the New Mexico/Colorado border are closed. This includes a little less than half of the trail between Grants and Cuba, and almost the entire trail between Cuba and the border.

While I suppose it would be possible to hike the open portion between Grants and Cuba, logistically, this would be difficult to do.

But, what to do about the closure was a problem best solved once we all got to Grants.

Mr. Freeze and Dog Bite left first, followed by Simple and myself. Plus One and Patches stayed behind, opting instead to hitch into town. (Patches leg, while feeling better than it did last night, was still in no shape to hike into town.)

The roadwalk this morning was uneventful. Simple and I stopped once for a break a bit more than halfway to the Subway. The roadwalk took us mostly due north, towards the broad side of a mountain. To our left was a volcanic lava field, mostly hidden by its height difference from the valley the road was in. 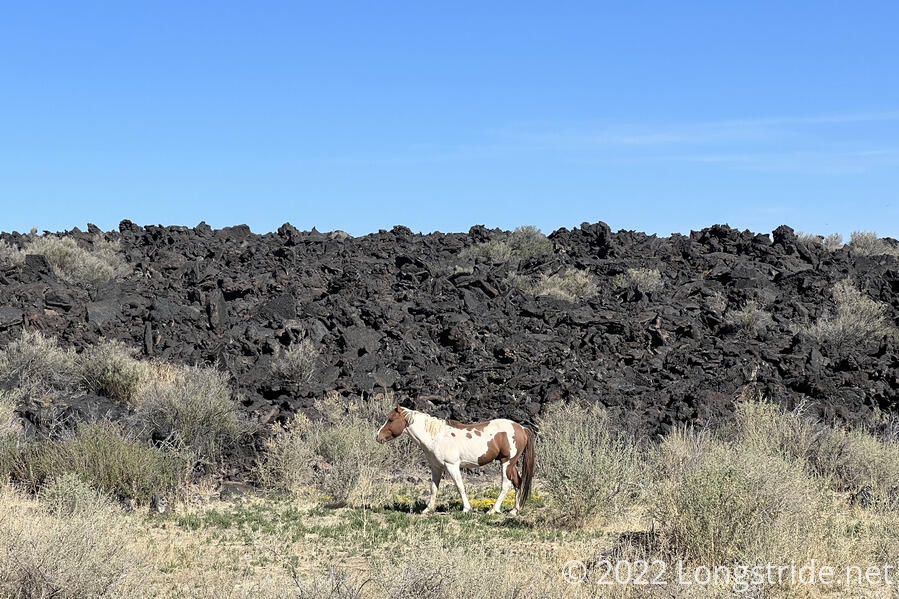 Volcanic Rock Wall — A horse grazes in front of a volcanic escarpment.

On the right, a sandstone cliff followed from The Narrows. The two were only a few hundred feet apart at places; it was interesting to think that if the volcanic eruption that created the lava field had released just a little more lava, the lava flow might have gone right up to the sandstone cliffs.

Sandstone Cliffs — Sandstone cliffs a few miles outside of Grants.

Shortly before ten, Simple and I reached the Subway. Mr. Freeze and Dog Bite were just leaving, hurrying off to get to Grants sooner.

Unfortunately, the Subway had closed its indoor seating due to covid, so we (and several other hikers) had to sit outside. But, it was shaded, so it wasn’t that bad. We were at the Subway for about 45 minutes, some of which we spent chatting with a biker who was curious as to what we were doing.

The rest of the walk to the outskirts of Grants, and then to the motel, took a little less than two hours. Done hiking before 12:30, we were happy to be out of the sun before the hottest part of the day.

Patches had already been able to check into his room at the Days Inn , and Plus One, Dog Bite, and Mr. Freeze had been hanging out there because they weren’t able to check in to their room (at a different motel) yet.

Plus One came to our room to visit, and relayed that Muenster Cheese (whom I last saw at Doc Campbell’s Post) was getting off trail. Apparently, he’d run light on water at the beginning of the day, expecting to get water at either the Dutchman Spring located just south of the northern junction between the Gila River alternate and the CDT, or from the water cache at the junction. However, either the spring was empty or he missed it; and the water cache at the junction was empty. And all the other potential water sources that day were empty, so he had all of one liter of water for the entire day. (Which also meant he couldn’t cook dinner.) Fortunately, he set up camp at a road that evening, and had an emergency beacon, which he used, and was able to get evacuated from the trail after a few hours. This was just the latest in a long string of bad luck for him (including a series of bad blisters), which culminated in him deciding to end his hike and return home.

The six of us went out for a late lunch at the Asian Super Buffet (which had a sadly mediocre buffet), and discussed our possible bikepacking option from Grants to Chama. Most of us are still interested in this option, but with reservations, including safety (someone is likely to fall, especially since many of us haven’t done this type of biking ever, or at least, in a long time), and where to get water. Someone driving a support vehicle carrying most of our gear and plenty of water was proposed, and just as quickly rejected, since no one really wanted to do that job. 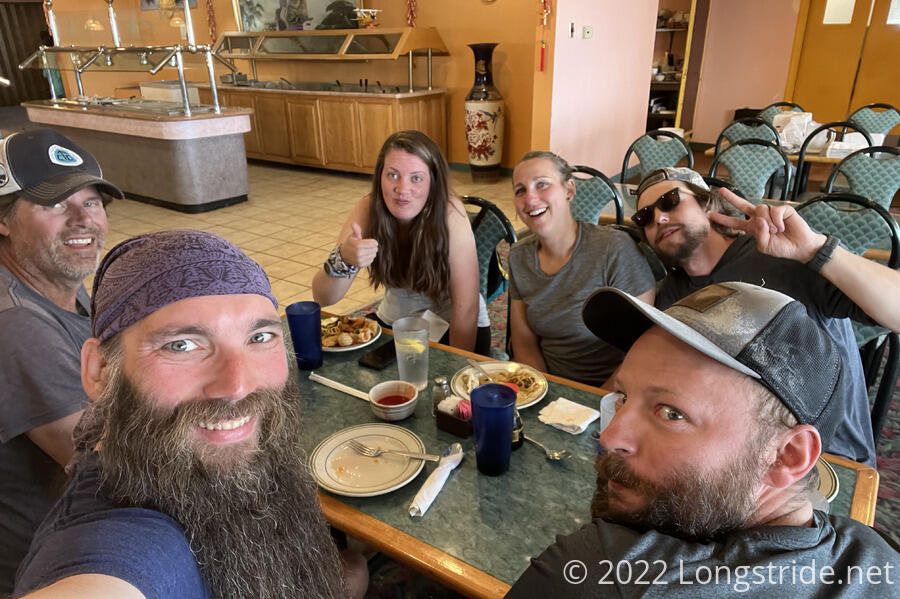 So, so while I’d still like to bikepack to Chama, as it’d allow for a continuous path around the fire closures (and would also be much faster than hiking), it seems less likely an option, and we’re probably going to wind up having to entirely skip the section between Grants and Chama.

However, beyond the fire closures, a new complication has arisen: a major snowstorm is supposed to hit Colorado this weekend, and may bring with it one of the largest May snowfalls in recent history. So skipping up to Chama immediately is probably a bad idea. (We learned of the snowstorm yesterday, and it is why Simple had decided to skip off to Florida for a few weeks; I just forgot to mention it.)

What does seem likely, though, is getting off-trail for a few days to let the new snow start to melt. It’d take at least two weeks to hike to Chama normally, so even if we took a week off, we’d still be ahead of schedule. This’ll have to be something we’ll figure out as we get more information.