My second day in Colorado provided what I’d been hoping to avoid: fresh snow while on the trail.

I’m not sure I actually got any sleep last night, or at least, I didn’t actually fall asleep until sometime well after midnight. I’m also kind of surprised my tent is still in one piece, after all the wind overnight. Everyone else’s tents were similarly loud and flappy, but no one’s tents appeared damaged by all the wind.

After dying down for about an hour, the wind returned in force, and continued blowing until about half an hour after sunrise. A few specs of snow or hail fell, I thought, but not enough to do more than remind that it was supposed to snow today.

I left camp around 7:45; earlier would have been preferable, but it was too hard to get up when it was cold and windy (and dark) outside. Still, it was cold, overcast, and somewhat windy. I had the feeling it was going to be another long, hard day.

Climbing back up the snow to the trail gave a great view to the east, reminding me why I was out here, despite the inclement weather.

View from the trail just above the campsite from last night.

The first order of business today was to finish the climb I’d started yesterday, taking me to Flat Mountain. At 12,187 ft, this is the highest mountain I’ve summited. This is also the highest elevation I’ve been at since the High Sierra on the Pacific Crest Trail. 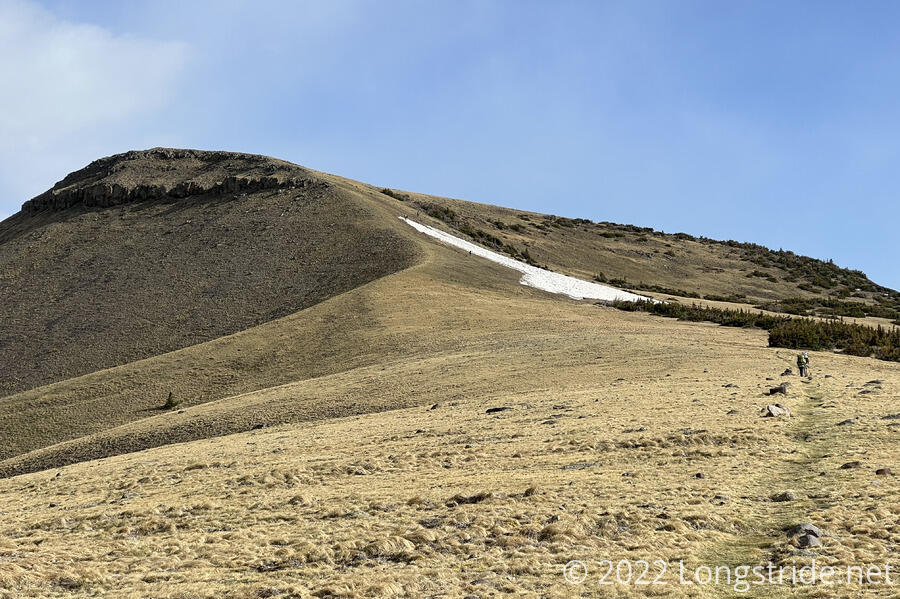 Approach to Flat Mountain — Kiernan and Kyra on the less steep area prior to the final climb to the summit.

The approach to Flat Mountain was a treeless bald, doing nothing to prevent the wind blowing at us. The top of Flat Mountain was also a bald, and (true to its name) relatively flat, though the trail quickly began a descent down the other side of the mountain. It probably was the fastest I hiked all down.

We stopped for a break about three miles in, at a small lake in a large flat area near the trail. (This is where we’d originally planned to stop yesterday. Given the steep final part of the climb up Flat Mountain, I’m glad we didn’t.) 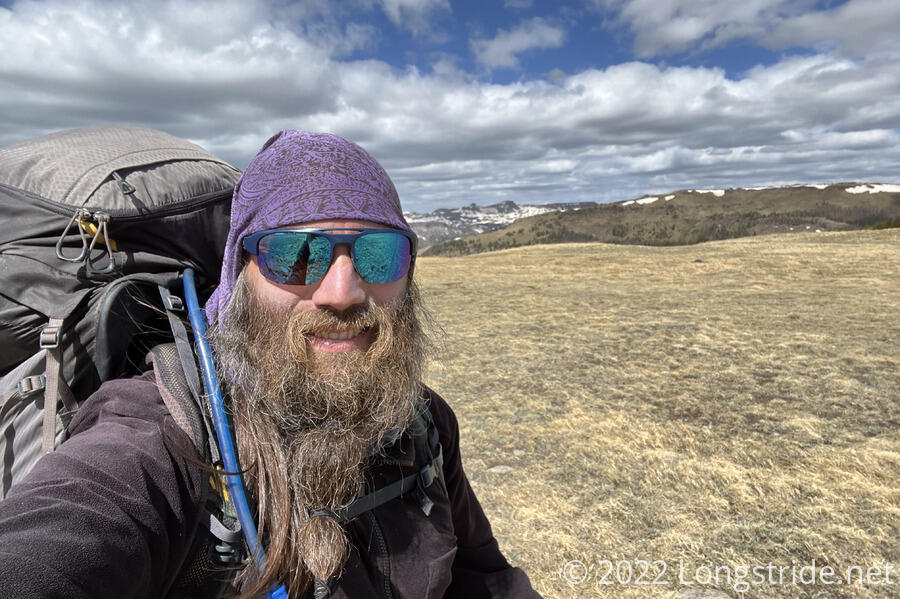 10 am Selfie Day 28 — On a flat area north of the Flat Mountain summit.

The trail went through an area with an extensive network of small lakes, connecting streams, and slightly-flooded wetlands from all of the snow melt. As I gradually lost altitude, the trail brought me back into a forest.

I caught up with the rest of the group at an alpine lake, and took advantage of the water to cook dinner and lighten my load a little bit. Plus One was coughing a fair bit, which she attributed to having quit smoking that day. As usual, everyone else hiked away before I left.

About half an hour after leaving the lake, I ran into a wall of snow blocking the trail. Not wanting to deal with traversing the snow, which looked a bit sketchy, I happened upon what seemed like an old trail that steeply climbed the mountain, sort-of like cutting a switchback. Judging from the footprints I came across, I wasn’t the only person to take that path, which got me where I needed to be: up the mountain and back on the CDT.

As I progressed along the ridge, the clouds behind me darkened, and appeared to snow. I got lightly snowed on myself, though it was just a minor inconvenience, and I eventually put on my rain jacket to keep the snow off my fleece.

Gaining in altitude I passed by a number of alpine lakes, some of which still had unmelted snow covering part of their surface.

I passed Dog Bite and Plus One, who were sitting aside the trail. Plus One was huddled in her fleece and looked quite miserable; Dog Bite said she wasn’t feeling well, and they suspected she might have picked up covid. They’re going to go a bit further ahead and then take a side trail to a CDT alternate and go into the town of South Fork, which should be a much easier hike to get to a town than the CDT to Pagosa Springs will be.

Snow Clouds in the Distance

Besides the wind and altitude making the day tough, a fair amount of the trail was flooded from melting snow. In spite of trying to avoid water, my feet still wound up quite wet.

Our original plan for the day was to go 17.1 miles to Blue Lake. I initially thought this was rather ambitious, but as the hour grew later, I realized that there was no chance I would actually make it there. Judging from the topographical maps I had, I was nearing a point on the trail beyond which there would be no chance for flat campsites. At 6 pm, I started actively looking for campsites.

Shortly before 7, after rejecting a couple of not-so-good campsites, I saw a tent just off trail, beyond a flooded grassy area. Recognizing it as the K2’s tent (Kiernan and Kyra), and seeing some marginally acceptable space near them, I decided that’s where I was going to stop.

Apparently having access to a weather forecast, Kiernan said there was a 30% chance of snow overnight. A Colorado resident, he also said that Colorado is not usually this cloudy or windy. Colorado usually has 300 days of sunny, largely cloud-free days; the cloudy days usually being in the winter.

But, late-season snowstorms aren’t unheard of in Colorado — we’d sat out a snowstorm just a last week.

Our campsite wasn’t terribly sheltered from the wind, but there were trees on two sides of our tents that did help to break the wind, at least a little bit.

I setup my tent and crawled inside, not bothering to cook the rest of my dinner. Shortly after sunset, the wind died down. But only a few minutes after that, the snow started.

It’s going to be a cold night…

Continental Divide Trail, 2022
« (Day 27: Discontinuity) Previous Entry
Next Entry (Day 29: This Is Not A Winter Wonderland) »