Back on the trail after finishing Montana, I finished hiking the last few (or first) miles of Colorado, and plunged back into New Mexico to close the gap to Grants, rather astonished by the amazing fall colors in the mountains.

I was a bit slow in getting up and getting out of the hotel. This was hindered by the fact that nearly every door was locked, including all the doors to the outside, and there was no one else around. I was locked in! So after looking around for a way to get out, I settled on just unlocking one of the side doors, and too bad that the building was now unlocked.

Once outside, the first order of business today was breakfast. I went to Boxcar Cafe, where I got breakfast the last time I was in Chama. Unlike then, it was incredibly busy, and service was very slow. Breakfast was okay, but I’d ordered hot chocolate (because it was cold out), and it didn’t arrive until after I was finished eating, and had sat there for five or ten minutes, and was just about to get up to pay and leave.

About quarter after nine, I made my way out to the main road through town, trying to hitch a ride up to the trailhead. I wasn’t expecting this to be fast — it took me half an hour last time — but this wound up taking my longest time trying to hitch, taking nearly an hour; in contrast, it “only” took 47 minutes to hitch into Whitehall.

While I trying to get a ride, an out of state car with the license plate “SAYLOVE” passed; apparently, they didn’t love to pick up hitchhikers. Later, another hiker, Rasputin, showed up, trying to get a hitch up to the trail. I saw him last night at the restaurant I had dinner at, though we didn’t talk. He was heading north, and he didn’t have any luck getting a ride either.

After nearly an hour, I saw another pair of hikers, come out to the road, one of whom had a familiar pair of pink pants. I almost couldn’t believe my eyes — it was Mr. Freeze and Soccer Mom — and they almost immediately got a hitch, which they shared with me and Rasputin. (It figured — Mr. Freeze always had good luck with that sort of thing.) I was particularly surprised to see them here, since when I’d last talked to them last week in East Glacier Park, she didn’t seem like she was going to, since her visa to be in the US was about to expire. But, if they pulled constant 20+ mile days, she’d have just be able to make it to Grants to finish. So, that’s what they were going to do.

We started from the trailhead — Cumbres Pass, at the southern end of Colorado — just after 10:30, already with our rain gear on. It was already cloudy in Chama, so it didn’t surprise me that it rained a little on our way to the pass, a good 2000 feet higher up than the town. At least it wasn’t super-windy like it was last time I was here. 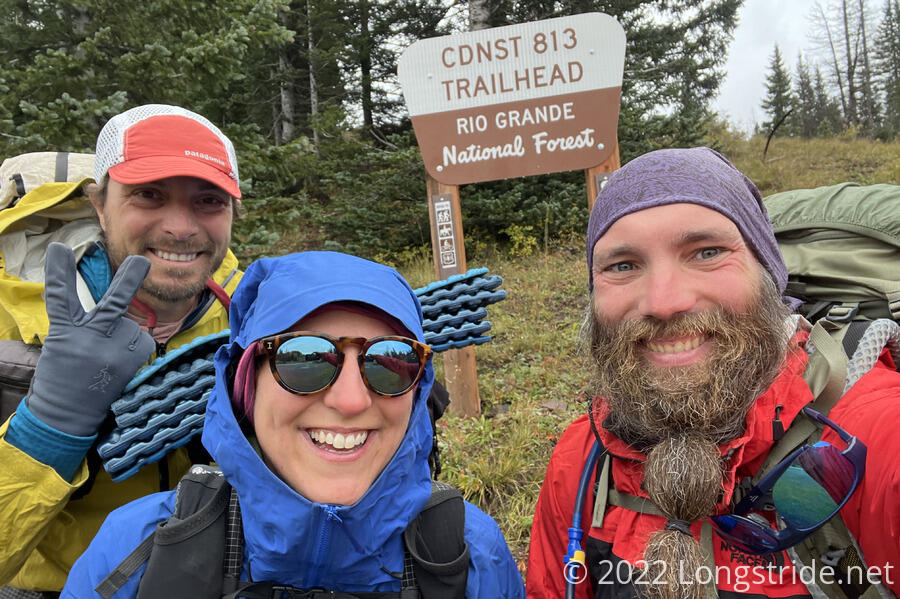 It felt a bit odd, heading south from Cumbres Pass. Now at 10,000 feet, I would be hiking out of the San Juan mountains, rather than into them, heading through the foothills that should have gradually prepared me for the high-elevation mountains of Colorado. After spending much of Montana in cooler forests, I was now heading back towards the desert. This is also my first multi-day southbound hike. While I’ve done a few days southbound on the AT and PCT, they were always as part of intermittent slackpacking. All together, it’s definitely an odd way to end a northbound hike.

Soccer Mom and Mr. Freeze, on a tight schedule, took off quickly and didn’t dawdle as much as I did on the views that came with climbing uphill to an overlook. They disappeared ahead of me, aiming to hike 20 miles today, and I suspect I won’t likely see them again.

The first view I got was simply amazing. This was already an amazing area when last I saw it. But now, the aspens turned bright yellow for the fall, and stood out brightly against the ever-present evergreens and the dull yellow-brown grass. 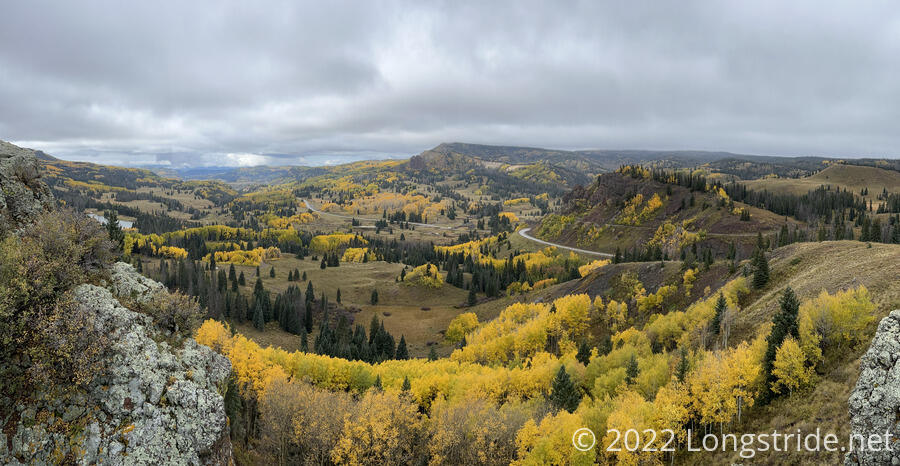 Aspens in fall color light up the landscape.

The trail followed close to the edge of a steep drop-off for about a mile, before climbing into forest. A light rain briefly fell. The trail flitted between forest and open ridge, with a couple more viewpoints from the ridge.

The last view from Colorado.

After an hour, I reached the Colorado - New Mexico border. Like Wyoming, a few license plates on a pole marked my second exit from Colorado. Now, I was finally done with Colorado.

I continued through forest for several miles, slowed a little by the trail having a lot of sticky mud, and there being an abundance of cow shit on the trail. New Mexico being New Mexico, I wasn’t surprised when the trail joined a dirt road and I passed two cows. 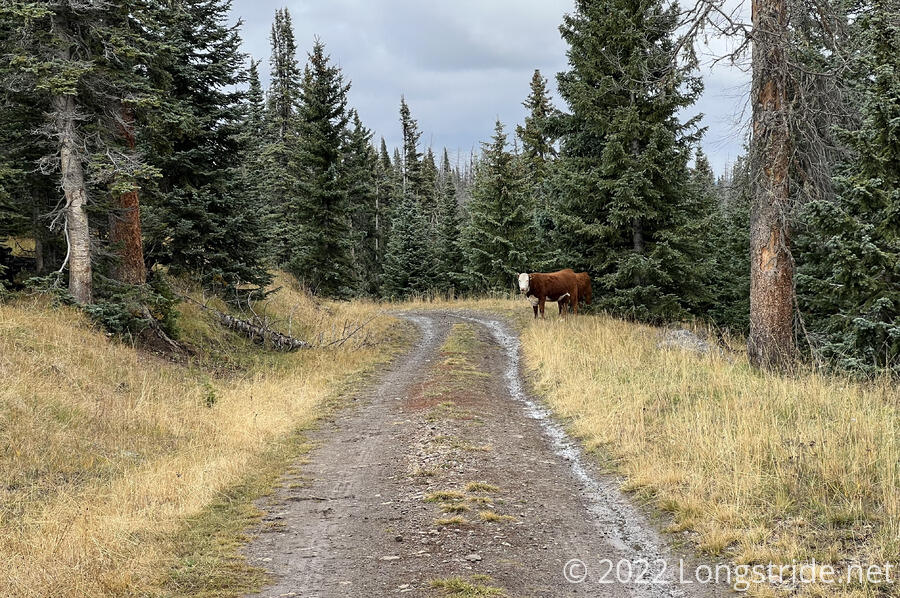 Two Cows in the Forest

Now at 11,000 feet, I, but especially my legs, were tired. Fortunately, the trail trends downhill from here to Grants, but I’m still going to be at this altitude until I drop down to Ghost Ranch for my next resupply.

The trail turned off the road, and a light rain began falling again. In the woods nearby, I caught a glimpse of a largeish animal running away. Possibly it was large enough to be a moose, but I didn’t get a good enough view to tell what it was. It could well have been a cow.

Later, as the trail exited the forest for open meadow, I did wind up chasing a cow down the trail for probably half a mile before it eventually wandered off.

I saw a truck drive past on one of the dirt roads that criss-crossed the meadow, and stopped for a break at the trail’s intersection with that road, using a (rather uncomfortable) rock to avoid having to sit on the ground while it was still drizzling. Two other hikers passed, heading south, just before I resumed hiking. I wound up passing them again shortly after. (I think they stopped for water; I’d decided to just haul all the water I’d need for today from town so I wouldn’t have to worry about it today.)

Continuing to cross the meadow, the trail became unusually twisty, unnecessarily so, I thought. I wound up skipping a couple of switchbacks and just charged straight up a hill because it was starting to feel like a waste of time.

The short climb brought me up onto a new ridge, with very rocky ground and an incredibly wiggly trail. It wasn’t difficult, so much as it was annoying, but I wound up with a bunch of small rocks in my boots and had to stop to clean them out. To the west, rainclouds obscured a distant ridge.

Rainclouds obscure the ridge to the west.

Crossing another road, a scenic viewpoint to the east opened up into a valley filled with aspens lighting up the landscape as far as the eye could see. If I’d been here when I “should” have been, near the beginning of June, the view would never have been this spectacular. 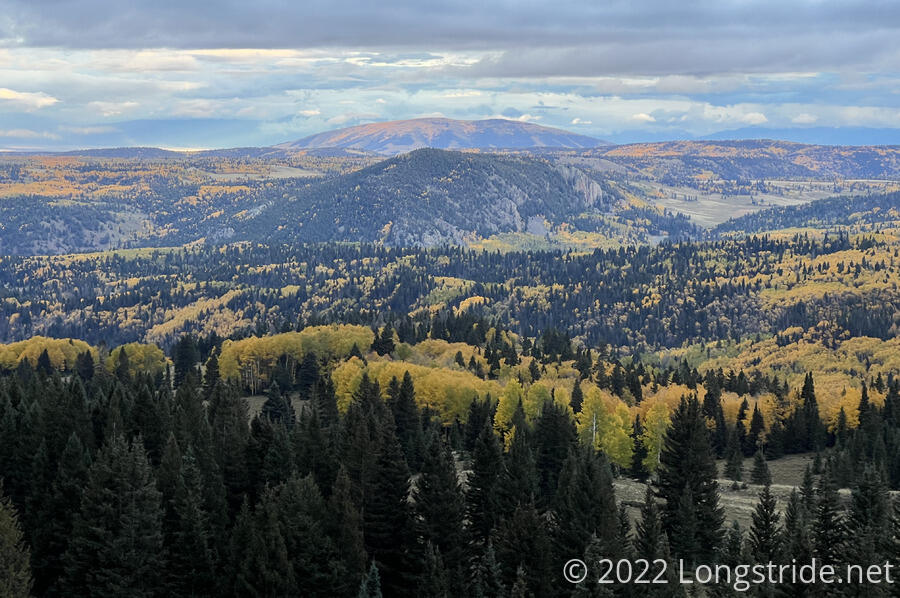 Aspens light up a valley.

Feeling I’d gone far enough, and wanting to get set up before any rain that might fall, I started looking for a campsite. Comments in my trail guide suggested to “go south for a lil minute” from the road to good camping, whatever that was supposed to mean; I assume it meant to follow the road, and not the trail, because there wasn’t anything reasonable near the trail for three tenths of a mile past that. With the trail itself on a bit of a slope, I went a bit off-trail, further up the hill, where it was relatively flat. I set up next to some pine trees on rather rough ground, but it worked. To the west, clouds darkened, and it seemed like rain was likely. 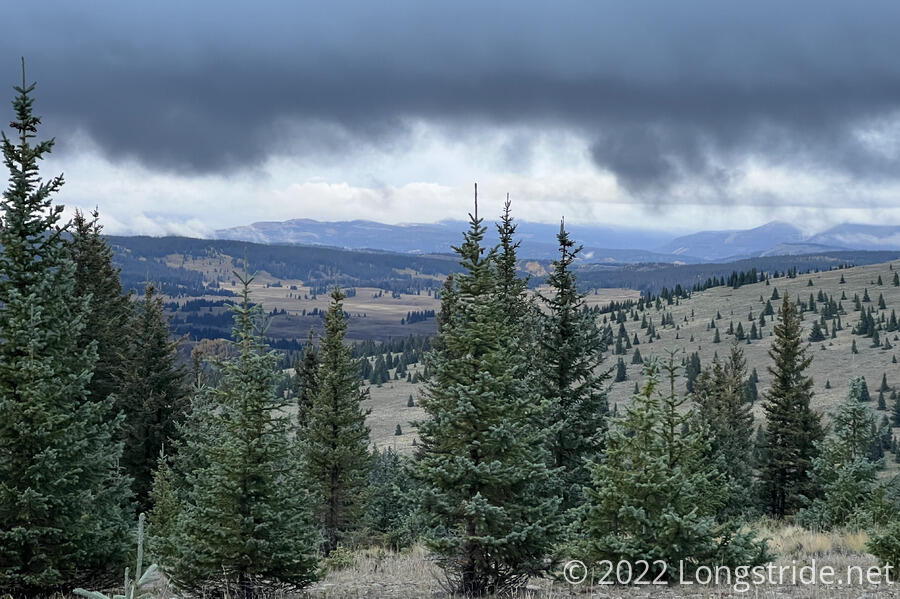 View from my Campsite

I got my tent set up, which took a little longer than it normally did because it was a bit windy and the ground was rocky. I had a little protection from the wind thanks to the nearby trees, but the wind shifted after I got set up, and it blew into my tent, rather than around, while I was cooking dinner.

The sun set, and it got cold very quickly. With the cold (and the clouds) came humidity. Condensation appeared on the nearby trees, and eventually fog rolled in.

Not getting a lot of sleep the past few days because of traveling, I’m pretty tired, and decided to turn in early — before 8:30 pm, even! My feet didn’t much enjoy the more rocky terrain this evening. But, it very much helps that Cumbres Pass is even more beautiful than it was last time, with the fall colors. And while it does feel backwards, since this would be a wonderful transition from the desert to the south into the mountains to the north, it does feel good to be now closing the gap that opened due to the fire closures.

I think today was probably the steepest part of the trail from Cumbres Pass to Grants, except for Mount Taylor. With the trail less steep tomorrow (and since I should be able to get a full day of hiking in), I’m hoping to get 23 miles tomorrow to a campground. I fell about 5ish miles short of my goal to a campground today, but since it took as long as it did to get to the trail, that plan just wasn’t going to work out.