Aspens continued to light up the mountains, as the trail took me on an extremely meandering course south through the Carson National Forest.

Shortly after I turned in for the evening, what sounded like a light rain began. Quickly, though, it became evident it was snow or hail, and fortunately, it tended to accumulate only on one side of my tent, so I was able to knock it off and keep it from accumulating without too much effort. When I woke up again a few hours later, what had stuck had melted off, but a fog cloud covered the mountain.

By morning, the clouds had lifted, though it was still cold, and one side of my tent had frost on the inside. The cold, as well as the icy wet tent delayed my departure, and I didn’t leave camp until almost 8:30. 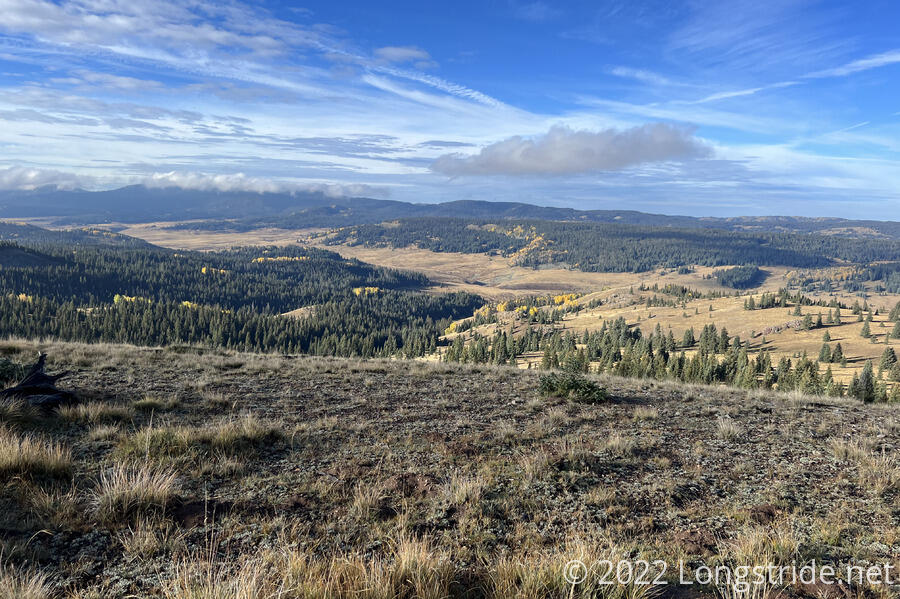 From camp, the trail continued south, meandering just below the relatively flat ridge, eventually entering a forest. That forest took me to a narrow trail on a steep cliff face, with slippery, sticky mud, which took some care to keep from sliding down. 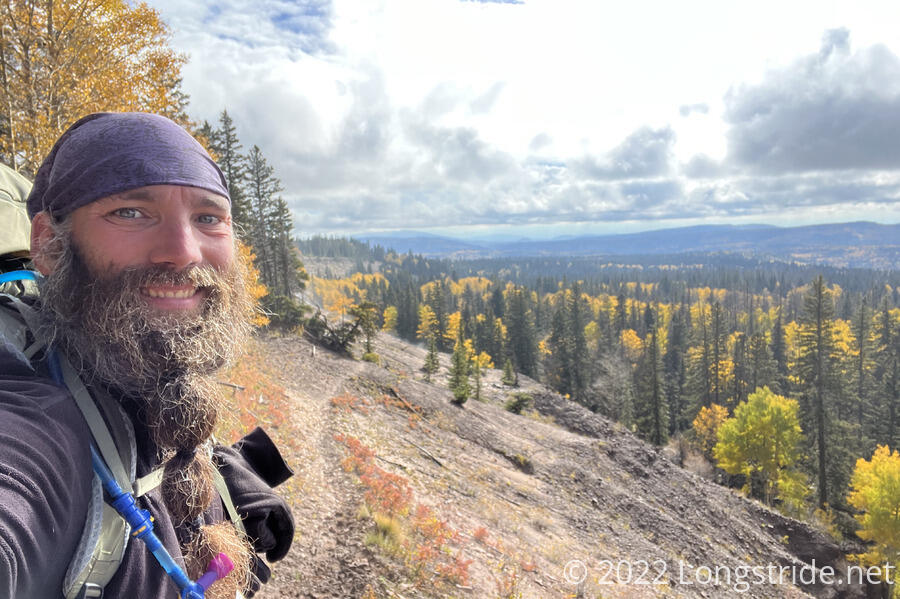 The trail passed by a small campground (complete with a pit toilet!), then dropped down the cliff and cut between two lakes, following a dirt road.

Recently rerouted, the trail diverged from the road. The reroute, however, was entirely unnecessary. While I appreciate hiking on trail, rather than road, it’s not like any vehicles regularly traveled this road, and the new trail was very rough, and longer than the old road route. I eventually wound up just cutting off the trail and joining another dirt road to get where I needed to be.

I passed two southbounders, Mango and Snow, who’d stopped to get water at a small creek the trail crossed. They told me about Speck and Space Jam (the two hikers I saw yesterday), and Onion. All three of them, it turns out, are doing the same thing as me: we’re all northbounders who skipped from Grants to Chama because of the fire closures, and came back to do the section Grants southbound. About an hour later, after crossing a flat plateau, I passed all three of them.

The trail brought me to the steep side of the plateau, about 200 feet down to a creek. Across the creek valley, aspen continued to glow in the sunlight, and a herd of cows grazed on a hilltop. 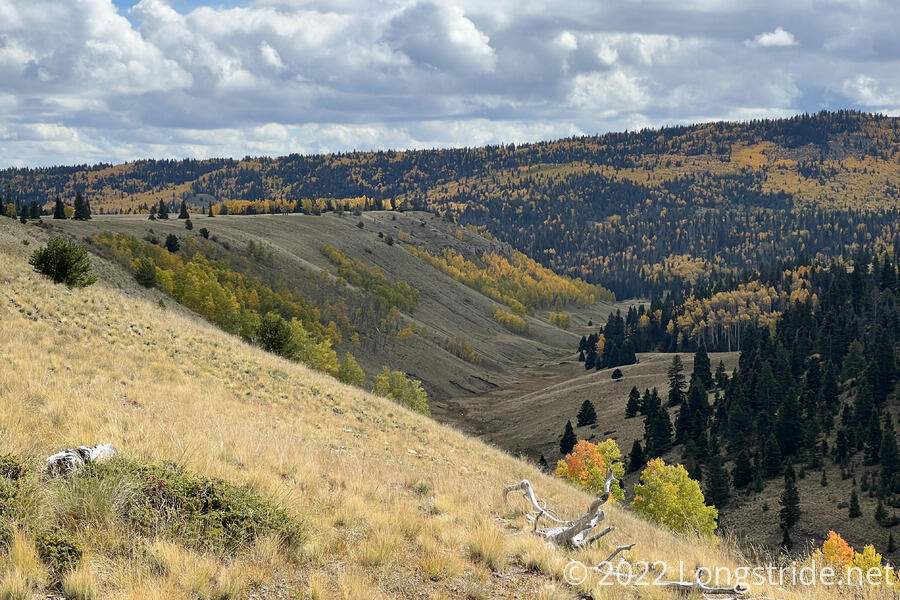 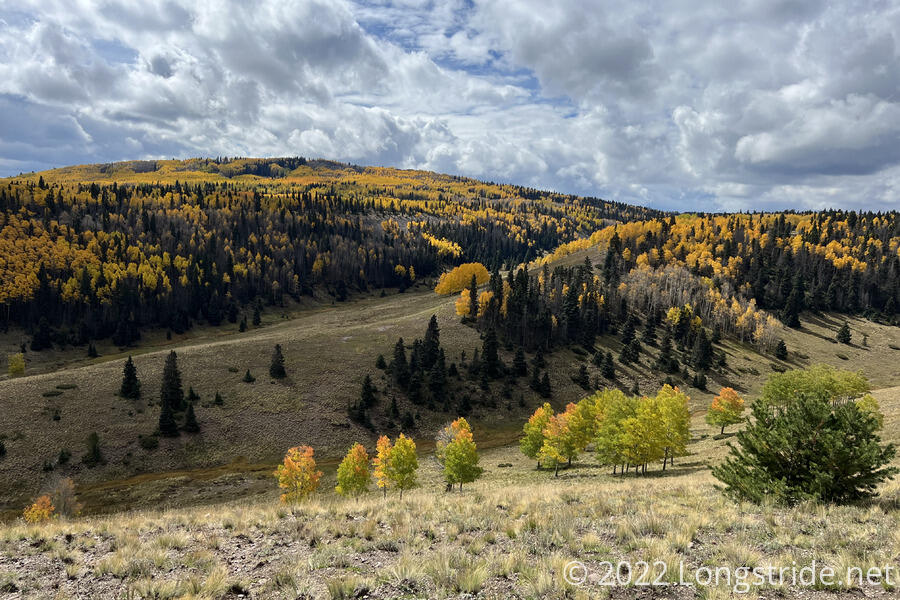 The trail took me around a corner and crossed the creek, passing by five cows that were reluctant to move away from the trail. A little past the cows, I stopped for a break at a campsite that would have been nice had it not been for the many cow pies scattered around. 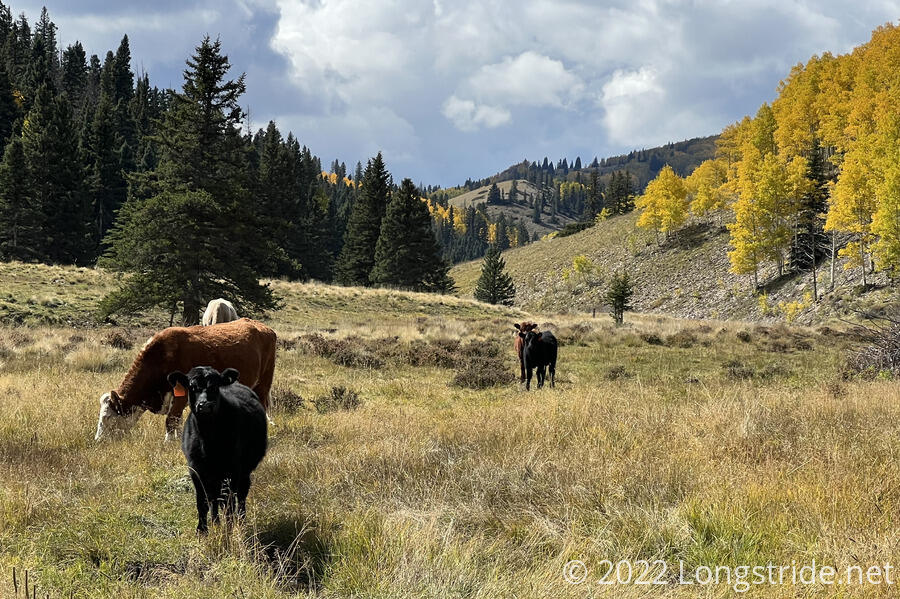 From the campsite, the trail climbed up another creek valley, the steepest climb of the day (which is not to say that it was very steep at all), and continued bouncing around, as it had been in the morning, going through a mix of meadow and forest.

The trail for much of the day meandered back and forth, annoyingly so. Especially later in the afternoon, the trail gave me the distinct impression that the trail maintainers were given a maximum mileage target, and did everything they could to make sure the trail was as close to that maximum as possible, wiggling back and forth and curving around hills that could easily have been climbed over.

I passed Dash on the side of a mountain, taking in a view. Off in the distance, some of the mountains appeared to have snow. Given the ice mix that fell last night, this seemed a good indicator that going south from Chama was a smart idea. The weather’s only going to get colder (and snowier) over the next two weeks, and I’d rather be further south and at lower elevation as that happens.

The trail left the forest, winding around (or through?) a ranch, and crossed an increasing number of ATV trails. I passed a small pond, the last water source for a while, and decided to skip it since the water didn’t look all that great. This committed me to another six miles of hiking to a campground on a (much larger) lake, which would also help pick up some distance since yesterday was a little short. A pavilion and pit toilets were reported to be there, so I was hoping I’d be able to camp in the pavilion. A roof would make it a little warmer; I hoped that maybe there’d also be at least a wall or two.

After the lake, the trail joined onto a nice forest road for a few miles, and I zoomed along, until the trail departed from the road, cutting down the middle between the road I’d been on, and another road to the left. Up ahead on the road, past the intersection, was a hiker, who appeared confused about where to go.

Passing a stand of trees, the trail crossed a depression lengthwise. Well, that is to say, I crossed the depression, which was slightly muddy. The trail, emulating someone so drunk as to barely be able to stand, looped back and forth across the depression in the most ever nonsensical series of switchbacks across flat land. (Tire tracks also crossed the depression; I guessed that the switchbacks were a vain attempt to keep hikers and cyclists from treading through what would probably be a swamp in wetter conditions. In the present conditions, though, it was the ludicrous culmination of the trail being unnecessary meandrous today.)

The hiker on the road came down the hill after seeing me pass, and I recognized it was Spice Rack. We continued through the forest and meadow, reaching and crossing a highway, and then following a relatively new trail to the parking lots and picnic areas above Hopewell Lake.

I dropped my pack at a picnic table to look around, meeting southbounder Wonder Woman who was getting water at the lake. Some people fishing offered us a fish to cook for dinner, but (not wanting to build a campfire) I didn’t have any way to cook a fish, let alone experience on how to prepare and cook one.

Relocating up to the pavilion, two of Wonder Woman’s friends, Wing It and King Wallaby were already there. The pavilion was a concrete slab with a roof covering four large picnic tables. The four of us each picked a table, and set up on the ground, cowboy camping under a roof. Dash and Spice Rack set up in their tents in one of the spots near the parking lot; Mango and Snow camped somewhere else nearby.

Once the sun set it very quickly became cold, and I expected it to freeze overnight. A nearly full moon lit up the area quite well, and I could see a tent set up on the far side of the lake.

I wished I’d gotten an earlier start today so it wouldn’t have been as cold while I was cooking dinner, but I still got 25 miles in. If I can keep up that pace tomorrow, it puts me in a good spot for Ghost Ranch a day or two after.